Objective: To perform a prospective randomized trial comparing the efficacy and safety of percutaneous nephrolithotomy (PCNL) in the prone and modified supine positions.

Results: There were no significant differences in gender, age, body mass index, stone location, stone size and the presence of hydronephrosis between the two groups. The rate of second PCNL was significantly higher and the stone clearance rate was significantly lower in the modified supine than in the prone position group. Mean operation time was significantly lower in the prone than in the modified supine position group (78 min vs 88 min, P<0.05). There were no significant differences in rates of rib and calyx puncture, numbers of punctures, mean blood loss, and mean hospital stay between the two groups.

Since the first successful removal of a renal calculus via a nephrostomy tract in 1976, percutaneous nephrolithotomy (PCNL) has become the preferred method of treating patients with large or complex stones.1 Traditionally, PCNL has been performed in the prone position,2 which allows a wide field for kidney puncture, avoids abdominal visceral injuries, and makes the puncture pathway short and straight. Multiple routes of access and the interoperative use of C-arm fluoroscopy X-ray machines may contribute to the vertical positioning of the puncture.3-5 This position provides posterior access to the collecting system, which theoretically enables the surgeon to puncture a posterior calyx through Brodel's avascular renal plane without significant parenchymal bleeding and peritoneal perforation. However, the prone position also has some disadvantages. For example, abdominal pressure decreases end expiratory lung volume and lung capacity, reducing the ability of patients to tolerate prolonged surgery, contraindicating the prone position in morbidly obese patients and individuals with some respiratory diseases.6

It remains unclear whether the traditional prone position or the modified supine position is optimal for PCNL. The prone position has been associated with reduced operation times and higher stone clearance rates, whereas the supine position has been associated with greater safety.3 The Valdivia position improved by Galdakao enables the use of flexible ureteroscopy and an ureteroscope to treat ureteral and kidney stones at the same time,13 whereas the Valdivia position improved by Barts often requires X-rays combined with ultrasound for determining the puncture site,14 and the puncture route is longer. We did not utilize the Galdakao improvement of the Valdivia position since flexible ureteroscopy was too expensive for routine use. Therefore, we compared the efficacy and safety of PCNL in the traditional prone and modified supine positions.

Patients were included if they had kidney stones of diameter >2.0 cm or upper ureter stones of diameter >1.5 cm and had not previously undergone nephrostomy; and if they did not have serious cardiovascular or cerebrovascular disease or a hemorrhagic tendency. All patients were definitively diagnosed preoperatively by plain film X-rays, intravenous pyelogram, ultrasonography or CT plain scan. All operations were performed by one surgeon, with at least 5 years of experience with PCNL. All patients provided written informed consent, and the study protocol was approved by the institutional review board of the First Hospital of Jilin University. A CONSORT flowchart of this trial is shown in Figure 1. 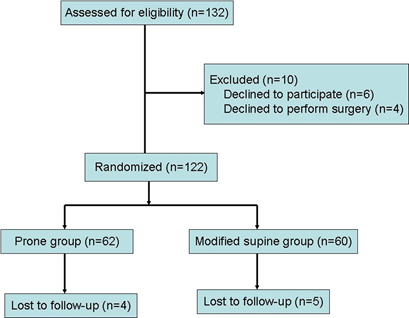 The entire procedure was performed with the patient under general anesthesia on the UROSCOP Access (Figure 2). Patients randomized to the prone position group were placed in the lithotomic position, and retrograde ureteric catheterization was performed. All other procedures were completed in the prone position. A cushion was placed under the belly to reduce the possibility of pleural damage. Using a combination of ultrasound (Aloka 5 multicolor ultrasound instrument with transducer frequency 3.5 MHz, Japan) and fluoroscopic (Siemens, Germany) guidance, an 18-G coaxial needle (Cook Inc., USA) was inserted into the desired calyx, and a working channel to Fr16 was established using the fascial dilators (Cook Inc., USA). An Fr9 ureteroscope (Olympus, Japan) was placed directly into the kidney through the established tract to confirm successful creation of the channel. After the ureteroscope was withdrawn, an X-Force N30 nephrostomy balloon dilation catheter (BCR Inc., USA) was inserted. An Fr24 Amplatz sheath was placed in the proper position, allowing the introduction of an Fr20 nephroscope (Storz, Germany). A cybersonics double-catheter system (Cybersonics Inc. USA) was used to fragment and remove the stone. At the end of the procedure, a clamped Fr20 Foley catheter was inserted to act as a nephrostomy tube and kept open for 24 hours. If there was no extravasation, the tube was removed four days after surgery. A double J tube was routinely inserted into the ureter and removed about 1 month later in the out-patient clinic.

Patients randomized to the modified supine position group were placed in a supine position with the flank raised and slightly rotated by a single 3-liter water bag. The patient's ipsilateral flank was elevated approximately 30° relative to the operating room table. All other procedures were identical to those performed in the prone position.

Operation time was defined as the time from ureteral catheterization to the placement of the nephrostomy tube. A stone-free state was defined as no residual stones of diameter >4 mm. Patients with residual fragments of diameter >5 mm were treated with extracorporeal shock wave lithotripsy (ESWL) or second phase PCNL. Postoperative complications were classified according to the modified Clavien grading system.15 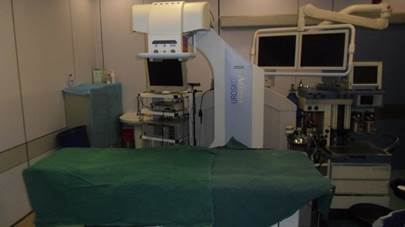 Patients were scheduled for follow up one month after surgery; during that time, however, 4 patients in the prone position group and 5 in the modified supine position group were lost to follow-up. The remaining patients underwent urinary ultrasound and plain film X-rays to determine if stones had recurred. The double J tubes were removed in the out-patient clinic. The double J tubes, however, had retracted into the ureter in one patient in each group; these tubes were removed under ureteroscopy in the hospital.

The baseline characteristics of the patients are shown in Table 1. There were no significant between group differences in numbers of patients, sex distribution, age, body mass index (BMI), stone location, stone volume, rate of hydronephrosis and previous medical and surgical history (P > 0.05 each).

The puncture pathways were shown in Table 2. The subcostal area was the location of rib puncture we initially chose; when subcostal puncture could not achieve the appropriate target calyx, an intercostal puncture was performed. The lower calyx was the most frequent site of target calyx puncture in both groups. Most patients were punctured fewer than three times. There were no significant between group differences in the frequencies of rib and calyx punctures and in numbers of punctures (P > 0.05 each).

Intraoperative and postoperative parameters are shown in Table 3. The mean operation time was significantly lower (78 min vs 88 min, P < 0.05) and the stone free rate was significantly higher (88.7% vs 73.3%, P < 0.05) in the prone than in the modified supine position group. The rate of repeat PCNL was significantly higher in the modified supine than in the prone position group (P < 0.05). No patient experienced stone recurrence after primary and second-look surgery, and no patient experienced major complications. There were no significant between group differences in use of analgesics, mean hospital stay, hospitalization expenses (data not shown), medicine therapy, mean blood loss, and need for blood transfusion.

Postoperative Clavien score in the two groups was never larger than 2 points. Fever occurred in 5 patients who underwent PCNL in the prone position and in 4 who underwent PCNL in the modified supine position (P>0.05, data not shown). Slight bleeding was observed in 7 and 6 patients in the two groups, respectively (P>0.05, data not shown), and non septic urinary tract infection was observed in the two groups. Pneumothorax, arteriovenous fistula, intraoperative bleeding resulting from termination of surgery, damage to adjacent viscera, renal excision, sepsis and death did not occur in either group.

Basic characteristics of patients who underwent PCNL in the prone and modified supine positions.

Puncture route in patients who underwent PCNL in the prone and modified supine positions.

Intraoperative and postoperative parameters of patients who underwent PCNL in the prone and modified supine positions.

PCNL has been traditionally performed in the prone position, with this position still being the most used. In the past decade, however, several variations in patient positioning for PCNL have been proposed. The first described supine position was that of Valdivia in 1998, with a 3-L saline bag below the flank 7. This position was further modified in 2006, with the Galdakao modified Valdivia position consisting of some rotation to the supine positioning of the contralateral leg in flexion and the ipsilateral leg in extension 13. The Barts modified Valdivia position, resulting in a larger surface area for easy access by manipulating the nephroscopem was first described in 2008 14. In 2012, Kumar and associates described 'the Barts flank-free modified supine position'16.

Advantages of the supine position include less patient handling, better drainage of the Amplatz sheath, a combination of antegrade and retrograde approaches, the ability of the surgeon to sit, easier change from spinal or regional to general anesthesia and higher tolerance, especially in patients with pulmonary or cardiovascular disease. Every supine variation, however, also has inherent disadvantages16. The complete supine position has several drawbacks, including reduced puncture space, difficulties in establishing multi-channels, and inability for use in patients undergoing retrograde transurethral surgery16. The Valdivia position has been regarded as safer, but requires a longer operation time and yields a reduced stone clearance rate7. The kidneys are more mobile, making tract dilatation more difficult in the Galdakao modification of the Valdivia position 13. The Valdivia position improved by Barts often requires X-ray combined with ultrasound to make punctures, but the puncture route is longer14. The Barts flank-free modified supine position is new, and its safety and efficacy remain to be determined16. Since all of our patients had kidney stones, not ureteral stones, there was no need for lithotomy. We therefore compared the traditional prone and modified supine positions.

We used a stabled UROSCOP Access rather than a moving X-ray machine. The operating table of the UROSCOP Access is fixed in the operating room, avoiding the movement of bulky machines. Surgeons can confirm the placement of a loach guide wire and residual stone fragments through the outside of the monitor, avoiding the need to wear lead aprons and X-ray injuries. When placed in the supine position, however, the patient must be placed as close as possible to the edge of the operating table, putting the surgical area far from the X-ray tube.

Only two prospective randomized trials 18,19 to date have compared supine versus prone PCNL, with both trials showing no significant differences in stone free rate between the supine and prone positions. However, we found that the modified supine position resulted in a lower stone clearance rate and a higher rate of repeat PCNL than the prone position. Our study only compared stone size, but did not consider the ratio of staghorn and complex kidney stones. FurtherWhat's more, stone remnants were found based on renal anatomy, because X-ray tubes did not permit the use of X-rays in the modified supine position.

None of the patients in our study experienced major complications. Complications may occur during or after PCNL and may include extravasation, transfusion, and fever, with an overall complication rate of up to 83%. The rates of major complications, however, including septicemia, colonic or pleural injury and serious bleeding, have been found to vary from 0 to 4.7%20,21,22. Furthermore, there were no significant between group differences in mean blood loss, need for blood transfusion, and mean hospital stay, similar to previous results18, suggesting that operations performed in both positions are effective and safe. There were no significant differences in the complication rate and requirements for blood transfusions. However, another randomized study found that the transfusion rate was higher in the supine (27.5%) than in the prone (7.5%) group.19 Differences between studies may be due to different transfusion thresholds between different centers.

Our study had several limitations. It was not performed in a double-blinded fashion, it did not assess the learning curves for the two types of surgeries, non-use of X-ray in the supine group, the length of follow up was relatively short, and the number of patients was relatively small. Moreover, we did not evaluate changes in renal function after surgery.