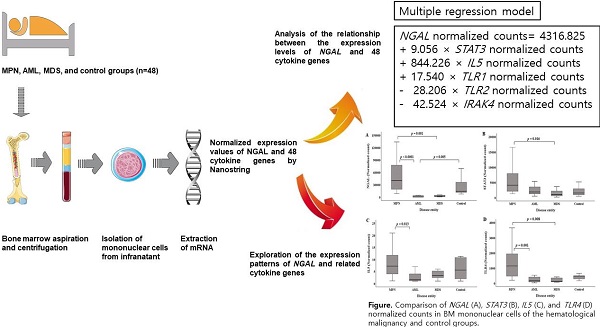 Methods: BM MNCs were isolated from 48 patients, who were classified as patients presenting myeloproliferative neoplasm, acute myeloid leukemia, myelodysplastic syndrome, and as controls. NGAL and cytokine genes were analyzed using NanoString. Data on hematological parameters were collected from medical records. Single and multiple regression analyses were performed to analyze relationships.

Neutrophil gelatinase-associated lipocalin (NGAL), a member of the lipocalin superfamily, is a glycoprotein originally isolated from the secondary granules of human neutrophils [1]. While NGAL is useful as a biomarker especially in kidney injury, it is also expressed in other tissues in response to various pathological conditions, such as ischemia, tissue injury, and cancer [1-3]. Being a pleiotropic mediator of various inflammatory processes [4, 5], NGAL acted at different levels as a regulator of multiple responses [6]. Recently, association of NGAL with several hematologic cancers have been reported [1, 5-8].

A few studies measuring NGAL protein levels in the bone marrow (BM) of patients with hematological cancer reported that NGAL levels were significantly lower in patients with acute myeloid leukemia (AML) and myelodysplastic syndromes (MDS) than in controls [8-10]. Given that neutrophilic precursors are the major source of NGAL synthesis and these exist primarily in the BM but not the peripheral blood, such studies have enabled an accurate comparative analysis of NGAL levels according to the hematological malignant disease entity [8].

The study was approved by the Institutional Review Board of Korea University Ansan Hospital and performed in accordance with the Declaration of Helsinki. Patients were enrolled between May 2018 and July 2019. Informed consent was obtained from all participants (n=48). Aliquots of leftover BM aspirate samples were collected from patients who underwent BM examination for the diagnosis of hematological malignancies. Patients were classified into myeloproliferative neoplasm (MPN), AML, and MDS groups based on the WHO diagnostic criteria, after the BM smear and pathological review. The control group (n=9) consisted of patients with lymphoma without BM involvement (n=7) or normocellular marrow without hematological malignancy (n=2) [8, 9]. None of the patients manifested symptoms of active infections, inflammatory diseases, or kidney failure [7].

Isolation of MNCs from BM aspirates was performed using Lymphoprep in SepMate tubes (STEMCELL Technologies, Vancouver, Canada) [12]. First, 4.5 mL of Lymphoprep (density gradient medium; density: 1.077 g/mL; STEMCELL Technologies) was added to 15 mL of SepMate tubes and pipetted through the central hole of the insert. The BM aspirate sample was diluted with an equal volume of phosphate-buffered saline (PBS) and mixed gently, then pipetted down the side of the (vertically held) tube. The tubes were then centrifuged (1200 × g, 10 min) and the top layer containing the enriched MNCs was poured into a new tube (15-mL conical polypropylene tube; Becton Dickinson), and PBS was added, resulting in a total volume of 14.5 mL. After centrifugation (300 × g, 8 min), the supernatant was carefully removed, and 2 mL of PBS was added to the infranatant (including BM MNCs). The solutions were mixed well, and the mixture was transferred to 1.5-mL Eppendorf tubes and centrifuged (400 × g, 5 min). The supernatant was then removed and the infranatant and isolated BM MNCs were stored at -80 °C until mRNA extraction.

A reaction mixture containing RNA (5 μL; 100-300 ng), Master Mix (8 μL; reporter CodeSet and hybridization buffer), and capture probeSet (2 μL) was prepared, and the solution was mixed and spun down. It was incubated at 65 °C in a thermocycler (Bio-Rad Laboratories Inc., Hercules, CA, USA) for 16 h (maximum hybridization, 48 h). Samples were then transferred to the preparation station (NanoString Technologies, Inc.) with a prepared nCounter Master Kit and cartridge. After binding the sample to the cartridge, 12 lanes per run of the nCounter prep station were run for approximately 2.5‒3 h. Cartridges were transferred to the Digital Analyzer (NanoString Technologies Inc.) for analysis and scanned on a digital analyzer at 555 fields of view.

For pairwise comparisons when a significant difference was found among groups, Scheffé's post-hoc test or Dunn's pairwise test was applied. In the parametric post-hoc analysis, we applied Scheffé's method because the test is robust for different sample sizes between groups.

To control the inflated Type I error caused by performing multiple comparisons and multiple simple regressions, a Benjamini-Hochberg false discovery rate (FDR) correction was applied [13-18]. The correction method adjusts the p values in a simpler but more efficient way than the traditional Bonferroni correction. The adjusted alphas were determined to be 0.018 for pairwise comparisons and 0.026 for multiple simple regressions. The procedure to determine the adjusted alpha has been detailed [13].

BM aspirates were collected from 48 patients with a median age of 62 years (range 22-89 years). All 48 patients were at the initial diagnosis stage. Patient demographics, hematological parameters, and normalized counts of NGAL are presented in Table 1. Six variables exhibited significant differences among the four groups. For numerical data, the significant results of the pairwise comparison tests between the groups are shown in Supplementary Table S1.

The relationship between the two variables in BM was further analyzed by simple regression analysis, which showed the following relationship:

† Adjusted alpha was determined as 0.026; ‡Normalized counts are presented as the median [quartile1 (Q1), Q3] values; * they were indicated, because those cytokine genes were included as independent factors in multiple regression models; P-values > 0.05 were typed in boldface. 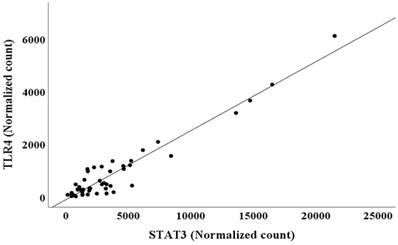 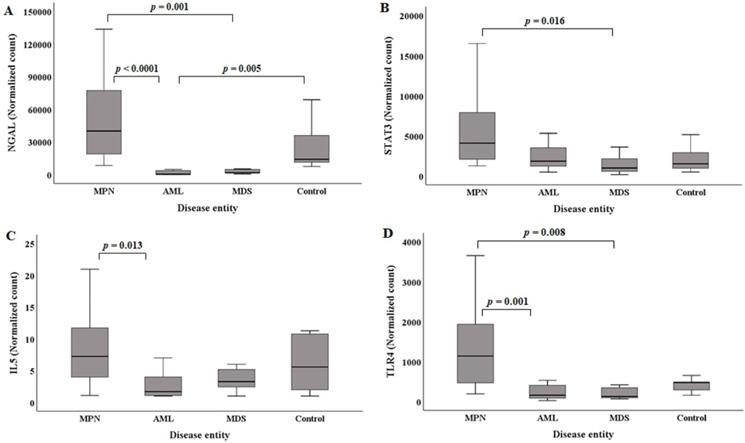 We analyzed the association of cytokines' expressions, using BM MNCs at the diagnostic time of myeloid malignancies, which represent clonal diseases of hematopoietic stem cells (HSCs) [21]. BM MNCs include not only hematopoietic progenitor cells at different stages of maturation (drived by HSCs) but also mesenchymal stromal cells (MSCs) comprising the HSC niche [22]. HSC niches are local tissue microenvironments that maintain and regulate stem cells, being often located near trabecular bone and created partly by MSCs and endothelial cells [23]. Recent studies showed that myeloid malignancies are caused by different genetic and epigenetic changes of HSCs and functional changes in HSC niche cells such as MSCs, while the interplay by various kinds of cytokines between HSCs and the niche play an important role [24]. Especially the interplay between both of them were reported to change during disease evolution [24]. In this context, our study displayed the association of cytokines in MNCs (including HSCs and MSCs) involved in the interplay at the diagnostic time of myeloid malignancy, especially presenting the association of NGAL with the relatively well known cytokine genes such as STAT3, TLR4, IL5, TLR1 and TLR2.

CRP levels were significantly higher in the AML group than those in the control group (Table 1; Supplementary Table 1). Although CRP levels (protein levels measured in peripheral blood, Table 1) were higher in the AML group, there was no significant difference between the AML and control groups with respect to CRP expression in BM MNCs (Supplementary Table 2). This is because plasma CRP is mainly produced in hepatocytes, but CRP gene expression in our study was measured in BM mononuclear cells [25]. In line with that, in our study, CRP gene showed very low normalized counts among all 49 genes (Table 2), and did not show significant differences between the groups (Supplementary Table 2).

However, WHO performance scores of AML patients in our study could not be identified accurately from medical records. Only given that four, two and one AML patients had over 70 years of age, PML-RARA rearrangement and brain hemorrhage, respectively, it could be speculated that AML group in our study would have had relatively high WHO scores. This possibly could lead to high CRP in AML group of our study.

As for low NGAL, a previous study using BM supernatant showed that AML group had low NGAL and high CRP levels [8]. That study suggested that the reason to low NGAL levels in AML group would be due to neutrophils or neutrophilic precursors as synthesis and storage sites of NGAL being suppressed by increased leukemic cells [8].

Nevertheless, as the limitation of our study, since MNCs were isolated from the BM via density, neutrophils would not have been necessarily preserved in the buffy coat and this could have biased the NGAL expression level in our study (more lymphocytes and less myeloid cells). To prevent such bias, future studies measuring the expression of cytokines and analyzing their association at single cell level are needed, which will also help elucidate the association of cytokines in myeloid malignancy more accurately and specifically.

The authors thank Editage (www.editage.co.kr) for English language editing. This research was supported by the National Research Foundation of Korea (NRF) grant funded by the Korean government (MSIT) (No.2018R1C1B5029760), the Research Grant of Jeonju University (No. 1120 0279), and Korea Institute of Science and Technology (KIST) grant (No. 2E31041, Development of brain-inspired neuromorphic technologies). The NRF, Jeonju University, and KIST grant provided financial support for the research.