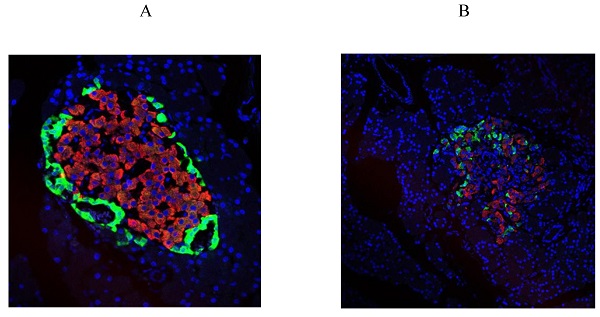 Objective: The pancreatic endocrinal system dominates the regulation of blood glucose levels in vivo, and the dysfunction of pancreatic endocrine β-cells is a major cause of the occurrence and development of Type 2 diabetes (T2D). Although microRNA (miRNA) have been found to be key regulators of pancreatic β-cells proliferation, differentiation and apoptosis, the underlying mechanism remains enigmatic. The aim of this study was to identify several novel miRNAs which might be involved in the etiopathogenesis of diabetic β-cells dysfunction.

Methods: The miRNA expression profiles in the pancreas of high-fat diet (HFD) fed Zucker diabetic fatty (ZDF) rats and Zucker lean (ZL) rats feed with normal-fat diet (NFD) were detected by using miRNA microarray chip, and individually verified the most significant factors by quantitative real-time polymerase chain reaction (qRT-PCR) assay. The Gene Ontology (GO) and Kyoto Encyclopedia of Genes and Genomes (KEGG) enrichment analyses were used to predict the target genes related to each of the identified miRNAs and the functions of these target genes in different metabolic signaling pathways.

Results: Compared with the ZL rats, a total of 24 differentially expressed miRNAs were detected in ZDF rats. Among which miR-34a-5p and miR-452-5p were the most significantly up-regulated and down-regulated respectively. These miRNAs have not been reported in rats' pancreas before. By GO and KEGG enrichment analyses, we found that miR-34a-5p could negatively regulate pancreatic β-cell proliferation through the involvement of Wnt signaling pathway. In addition, it was also found to regulate insulin secretion through the insulin signaling pathway to modulate blood glucose levels. At the same time, miR-452-5p was found to positively regulate the activity of the key rate-limiting enzyme branched-chain α-keto acid dehydrogenase-β (BCKDHB) in the catabolism of branched chain amino acids (BCAA), leading to mitochondrial dysfunction in pancreatic β-cells.

Conclusions: miR-34a-5p and miR-452-5p were identified as the novel regulators of pancreatic endocrine dysfunction. These miRNAs might have the potential to be utilized as the new predictive biomarkers for the diagnosis of the occurrence and development of T2D, as well as the therapeutic targets for T2D treatment.