Screening, identification and interaction analysis of key MicroRNAs and genes in Asthenozoospermia 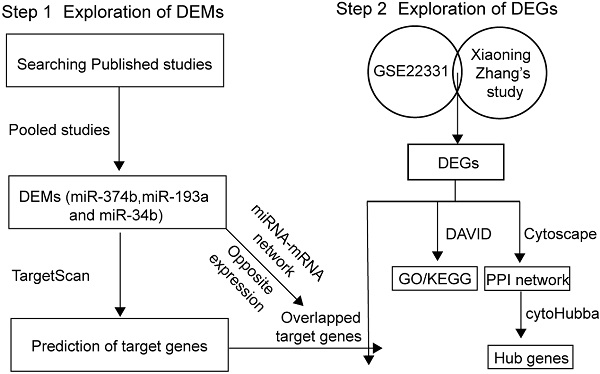 Background: Asthenozoospermia, one of the most common causes of male infertility, is a complicate multifactorial pathological condition that genetic factors are involved in. However, the epigenetic signature and mechanism of asthenozoospermia still remain limited. Our study aimed to confirm the key microRNAs (miRNAs) and genes in asthenozoospermia and demonstrate the underlying epigenetic regulatory mechanisms.

Results: We reported 3 DEMs and 423 DEGs by pooling included dataset and published studies. Pathway analysis showed that these DEGs might participate in signaling pathways regulating pluripotency of stem cells, Wnt signaling pathway and Notch signaling pathway. 25 hub genes were identified, and the most significant gene was BDNF. We screened out the overlapped DEGs between the predicted target genes of 3 DEMs and the 423 DEGs. Finally, a potential miRNA-mRNA regulatory network was constructed.

Conclusion: This study firstly pooled several published studies and a GEO dataset to determine the significance of potential miRNAs and genes, such as miR-374b, miR-193a, miR-34b, BDNF, NTRK2, HNRNPD and EFTUD2 in regulating asthenozoospermia and underscore their interactions in the pathophysiological mechanism. Our results provided theoretical basis and new clues for potential therapeutic treatment in asthenozoospermia. Validations in vivo and in vitro are required in future studies.