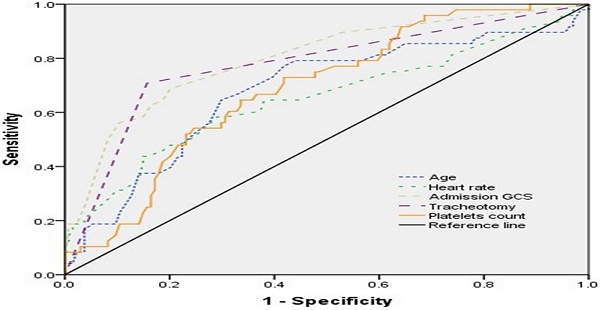 Objective: The purpose of this study was to investigate whether routine blood tests on admission and clinical characteristics can predict prognosis in patients with traumatic brain injury (TBI) combined with extracranial trauma.

Methods: Clinical data of 182 patients with TBI combined with extracranial trauma from April 2018 to December 2019 were retrospectively collected and analyzed. Based on GOSE score one month after discharge, the patients were divided into a favorable group (GOSE 1-4) and unfavorable group (GOSE 5-8). Routine blood tests on admission and clinical characteristics were recorded.

Multiple trauma was defined as the injury associated with more than one body cavity or organ, which was considered to be the major cause of death and morbidity [21]. As showed in previous clinical studies, TBI was often accompanied by injuries of extracranial sites [22]. In patients with multiple trauma, prognostic factors included age, sex, ISS score, GCS score, injury mechanism, and systolic blood pressure [23-25]. Condition of TBI patients with multiple injuries involves multiple parts, which are often severe and difficult to diagnose and treat, and may influence their prognosis. Hypotension and coagulopathy resulting from an extracranial injury were important factors for secondary injury to TBI [26]. The above predictive factors should be evaluated thoroughly in patients with TBI and extracranial trauma.

Therefore, to study the influence of extracranial trauma on the prognosis of TBI, we analyzed patients with TBI combined with extracranial trauma and evaluated whether blood analysis at the admission and clinical characteristics can be used to predict the patients' prognosis.

This retrospective study included patients with traumatic brain injury combined with extracranial trauma who were admitted to our department between April 2018 and December 2019 in Tongji Hospital. The study was approved by the local Ethics Committee. The diagnosis was based on a history of injury, clinical manifestations, and radiological examination. The inclusion criteria were as follows: (1) traumatic brain injury with head AIS ≥ 3, (2) at least one other body region with AIS ≥ 2, (3) admission Injury Severity Score (ISS) > 15, (4) interval from injury to hospital admission < 24 h, and (5) age ≥ 18 years. Patients with missing or incomplete data and isolated TBI were excluded.

Age distribution of patients in the study population. 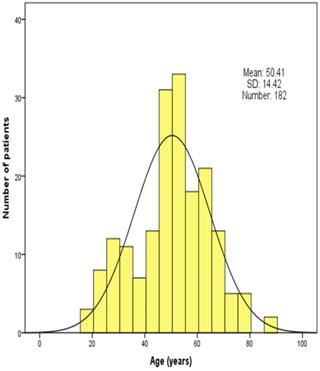 Routine laboratory parameters of the patients in univariate analysis

After adjusting for confound factors in the multivariate logistic model, age, admission GCS score, heart rate, tracheotomy, and platelets count were significant predictors of the 1-month outcome after discharge (Table 3).

Clinical outcomes in the patient population in multivariate regression analysis

The ROC curve of different variables predicting the prognosis of patients with TBI combined with extracranial trauma. 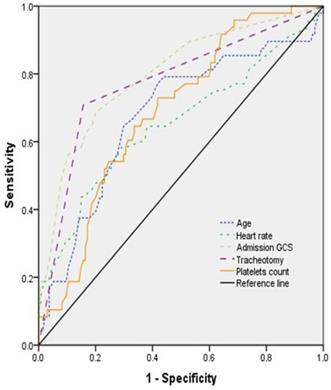 The ROC curve of different models predicting the prognosis of patients with TBI combined with extracranial trauma. 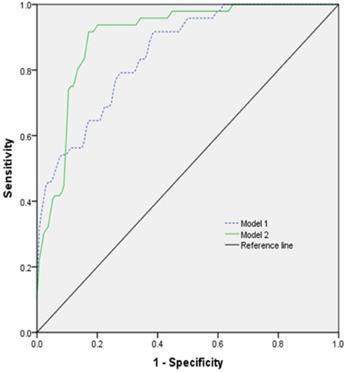 In terms of clinical characteristics, our logistic regression model showed that for each additional year and point of age and heart rate, the risk of unfavorable prognosis increased by 7% and 3.5%, respectively. For each point reduction in initial GCS and platelets at admission within 24 hours after injury, the risk of unfavorable outcome increased by 19.3% and 1.8%, respectively. In addition, anyone undergoing tracheotomy had 15.201-fold higher risk for poor prognosis. The AUC of age, admission GCS score, heart rate, tracheotomy, and platelets count was 0.678, 0.799, 0.652, 0.776, and 0.688, respectively.

Our study indicated a significant correlation between age and outcome at 1-month after discharge in patients with TBI and extracranial trauma. The age distribution histogram revealed that the age of patients was mainly between 40 and 70 years. In the unfavorable group, there were 25% of individuals with older age compared with 11.2% in the favorable group. Older age has been linked to worse outcomes, although possible reasons are still under discussion [32, 33]. Among TBI patients, older patients more commonly use anticoagulants and antiplatelet agents [34, 35]. Older individuals are more likely to experience domestic falls, which is associated with worse outcome compared with young individuals [1]. Moreover, we found that admission GCS score was an independent predictor of prognosis in TBI patients with extracranial trauma, which is consistent with some previous studies in TBI patients [3, 7, 36]. We did not confirm the ability of ISS to predict the prognosis of TBI patients after correcting for multiple blood indicators in a multivariate logistic regression model. However, our study confirmed that age and admission GCS can be used as remarkable predictors of the prognosis in TBI patients with extracranial trauma.

Heart rate is a vital sign and could be influenced by some pathological states, such as pain, shock, and intracranial hypertension. Reverse shock index, systolic blood pressure lower than the heart rate, also indicated an unfavorable outcome in patients with severe isolated TBI [37]. Moreover, another study revealed that cardio-cerebral network imbalance might influence the relationship of mean arterial pressure, intracranial pressure, and heart rate in sTBI patients [38]. As our study showed, heart rate was also an independent factor predicting the outcome in our patient population.

Tracheotomy is a common clinical procedure in patients with sTBI, which provides a stable and tolerated airway to ensure oxygen supply, despite some complications that may accompany the procedure [39]. Here we found that tracheotomy was an independent factor for unfavorable outcome. Some studies have shown increased survival in patients with tracheostomy compared with patients who remained intubated after severe TBI [40, 41]. However, the optimal time to perform tracheostomy remains a highly controversial topic. Early tracheostomy within 72 hours of admission reduced the duration of mechanical ventilation and length of stay in intensive care unit (ICU) in 120 patients with TBI [42]. A randomized trial and a retrospective meta-analysis indicated that early tracheostomy increased risk for hospital death and did not decrease ventilator-associated pneumonia rates [39, 43]. In contrast, several studies reported that early tracheostomy could improve prognosis in TBI patients [4].

The majority of patients had normal platelet count, and 29.7% of patients had low platelets in this study. We found that the platelets count was the only significant blood parameter in multivariate logistic regression model, apart from age, admission GCS score, and tracheotomy. Acute coagulopathy of trauma (ACT) is caused by tissue injury and tissue perfusion [44]. Coagulopathy is defined as low platelet count or elevated INR or prolonged APTT [45]. The platelet dysfunction, increased level of platelet distribution width (PDW), and low platelet count were associated with unfavorable outcome in TBI patients [46-49]. The fresh frozen plasma (FFP) resuscitation attenuated platelet dysfunction and improved survival in animals with multiple trauma [50]. Furthermore, the importance of ACT in TBI patients has been increasingly recognized. In a large population of patients with TBI, INR and APTT were recognized as independently related to in-hospital mortality [7, 51]. High PT was also recognized as a predictor of mortality in patients with trauma [49, 52]. However, PT, INR, and APTT were not independent predictors in this study.

Inflammation also plays an important role in TBI and multiple trauma [53, 54]. Mass release of proinflammatory factors caused by trauma stimulation or tissue necrosis can lead to leukocyte activation and lymphocytes deficiency [55-57]. Neutrophil activation has dual effects on TBI, which might contribute to repair mechanisms or aggravate the pathophysiology of trauma [58, 59]. The neutrophil-to-lymphocyte ratio (NLR) is associated with unfavorable outcomes in sTBI patients [8]. The majority of our patients had higher leukocyte and neutrophil counts and lower lymphocytes. The inflammatory stimulation caused by multiple injuries may cover the inflammatory manifestations caused by isolated traumatic brain injury, which may explain why inflammatory cell prediction was not significant.

Hypernatremia and hyperglycemia were associated with poor outcome after severe TBI [49, 60-64]. The main point is that stress response activates the hypothalamic-pituitary-adrenal axis and sympathetic nervous system, leading to elevated levels of neurohormones and insulin resistance [65]. Intensive insulin therapy was considered as a therapeutic strategy to treat cerebral metabolic distress in a previous study [66]. However, to prevent hypoglycemia, strict blood sugar control was not recommended [67]. Nevertheless, we did not find that high Na+ concentration, hyperglycemia, and high BUN were independent predictors of outcomes in our study. In addition, prognosis of patients with TBI was worse in patients with anemia [49, 68, 69]. Multiple trauma was also related with injury-associated anemia [70]. More than 50% of the patients in our study population had low hemoglobin levels. However, hemoglobin level was not an independent predictor of neurological prognosis in this study.

This study had several limitations. First, this was a single-center retrospective study, which is why selection bias may have existed. Second, this study investigated a relatively small cohort of patients that may not be significantly representative of a TBI population with severe multiple injuries. Some patient data about pre-injury drug use and more comorbidities were incomplete. In addition, the effects of different parts of multiple injuries on TBI may be different. Finally, the prognosis was assessed with a short-term outcome. Therefore, further randomized studies based on large populations and appropriate follow-up times are needed to provide stronger evidence for predicting patient outcomes.

We further confirmed that age, admission GCS score, pupillary reflex, tracheotomy, and platelets count can be used as independent predictors of clinical prognosis in patients with severe TBI with extracranial trauma.

We would like to express our sincere gratitude to Yongwei Yu, Manli Tang in Tongji Hospital for their work in collecting the clinical data. This work was supported by grants from the National Natural Science Foundation of China (No's. 81801174 to W.W., 81571891 to Z.F.L.). All procedures performed in this study followed the ethical standards of the Tongji Hospital.

The data for this study are available upon reasonable request to the corresponding authors.