Background: Long-term opioid therapy is a risk factor for low bone mineral density (BMD). However, other factors may also contribute to low BMD. Several studies have examined the variables that might contribute to low BMD in patients receiving opioid replacement therapy (OST). However, to our knowledge, there was no systemic review conducted to address this particular issue. Thus, we reviewed the articles on the factors associated with low BMD in the population of opioid use disorder receiving substitution therapy.

Methods: The articles that examined correlates or risk factors of low BMD in OST population were retrieved from OVID, SCOPUS, and PUBMED from inception until July 2020 by two independent investigators.

Results: A total of 429 articles from three databases were retrieved initially. After screening based on eligibility criteria, five articles were included in the final analysis. The risk factors or correlates found to be significantly associated with low BMD in the OST population include male gender, low body mass index, low testosterone level, methadone or heroin use, and longer duration of heavy alcohol use. The review limitations include small sample sizes and inconsistent definition of variables.

Conclusion: OST patients should be screened for BMD and its associated factors. Guidelines and training of practitioners involving in the OST service should be provided to increase the detection of low BMD in the OST population.

Opioids are drugs that are widely used for pain management. It is an essential drug listed by the World Health Organization for the treatment of cancer and non-cancer-related pain as well as management of psychoactive substance use disorder [1]. Given the intensely pleasurable effect of opioids secondary to reward system activation, it is often abuse for recreational use [2]. However, prolonged use of opioids for chronic diseases or recreational use possesses a significant threat toward opioid dependency and addiction [2]. The estimated global prevalence of opioid dependency in 2017 was 40.5 million, more than double increment than those reported in 2010 [3, 4]. Although its development is not definite, extra-medical use of opioids contributes towards a significantly higher risk for opioid dependency compared to medical use, with the former affecting up to two-thirds of patients than less than one-third in the latter population [4].

Opioid substitution therapy (OST) is the long-term, most effective treatment for opioid use disorder [4, 5]. Methadone and buprenorphine are two drugs commonly used in OST. Methadone is an opioid agonist and has been proven to be more cost-effective than other treatment measures, such as buprenorphine [6, 7]. On the other hand, buprenorphine is a partial opioid agonist that is available as an alternative to methadone maintenance treatment (MMT). Despite the positive impact of OST in patients, OST is also associated with unwanted treatment effects such as sexual dysfunction, disturbed menstruation, infertility, and low bone mineral density (BMD) [8-15]. These adverse effects may develop as a consequence of opioid-induced hypogonadism or other-related mechanisms [15].

Other than opioid-induced hypogonadism, the direct inhibitory action of the opioid on bone is another potential mechanism of bone pathology in opioid dependence population. This mechanism is supported by the presence of opioid receptors (mu, delta, and kappa) and opioid growth factor receptor on osteoblast [29, 30]. Evidence of enhanced osteocalcin synthesis, osteoblast activation, and increase in bone mineralization following administration of naltrexone, an opioid antagonist, further supported the role of opioid in bone formation [29, 30].

We included all observational studies such as case-control, cross-sectional, and cohort studies evaluating the risk factors or correlates for low BMD. We excluded abstracts, case reports, case series, and reviews.

Search methods for identification of studies

We searched using PUBMED, OVID, and EMBASE databases from inception to July 2020 for observational studies. The studies included cohort, cross-sectional, and case-control studies describing the association between the risk factors or correlates for low BMD in OST patients. We had limited our searches to the English language. We used the following search terms: (“opioid” OR “opioids” OR “opiate” OR “opiates” OR “methadone” OR “buprenorphine”) AND (“osteoporosis” OR “osteopenia” OR “bone mass” OR “bone mineral density” OR “BMD”). The search strategy for each database can be referred to as Figure 1.

The selections of the studies were conducted by FFR and NME independently based on three phases. Firstly, the articles were screened, and those that did not match the inclusion criteria solely based on their titles were excluded. Secondly, all the abstracts of the remaining articles were screened, and papers that did not match the inclusion criteria were excluded. Lastly, the remaining articles were read to exclude the second group of articles that did not match our inclusion criteria. The remaining papers were screened again by the FFR and NME before the data extraction phase. Any discrepancy between the FFR and NME were resolved by discussion or by involving a third author, SASH, as an adjudicator.

The extraction of the data was conducted by FFR and NME independently. The studies retrieve from the database are initially screened for eligibility based on the inclusion criteria mentioned above. We did not contact authors of published articles due to feasibility reason. FFR and NME independently extracted the following data: the first author's name, year of publication, types of study, study regions, sample size, patients' demographic characteristics (gender, age), and associated risk factors. We assessed the potential risk of bias in studies based on the modified Newcastle-Ottawa scale for cross-sectional [32] and cohort studies [33].

Search strategies for all databases. 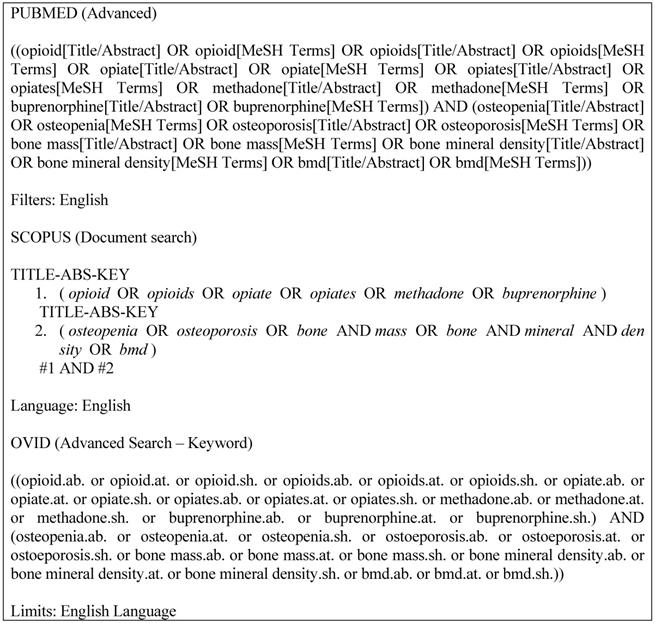 Selection process of the studies. 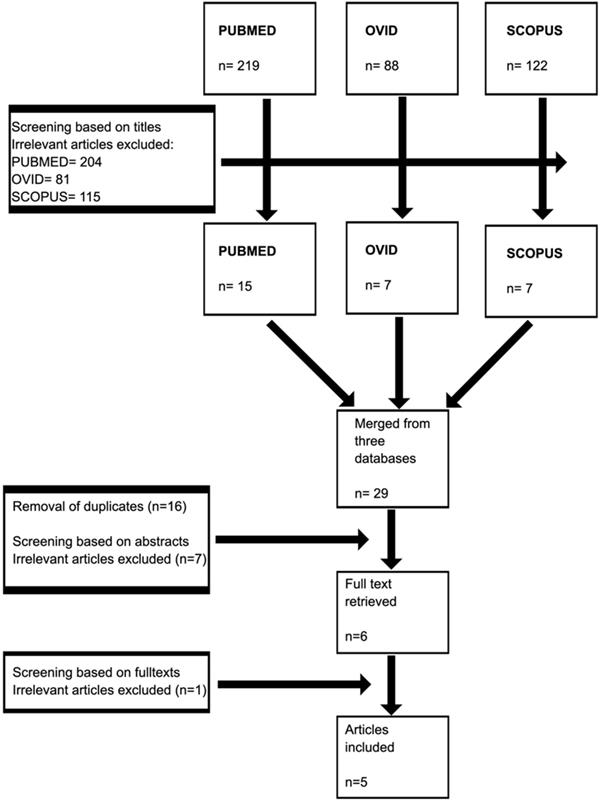 Characteristics of the included studies

Table 2 represents the association between specific factors identified in a specified study. ✓Means the presence of a significant association between specified factor and low bone mineral density. Nil means that the factor was included in specified study, but no association was found with bone mineral density. An empty cell means the factor was not included in the study. † Methadone use is the only factor included in the table as the study consisted of only one-third of patients who had ever used methadone. *positive association; a alcohol use; b current smoking; c duration of opiate use; d methadone use; e years of heavy alcohol use; f years of smoking; g heroin recent use and duration; h methadone dose and duration of treatment; i duration of heroin and methadone use.

We found that four studies had cross-sectional or case-control designs and one cohort study. Three studies had less stringent criteria that excluded only those who were not willing to give or withdrew the consent [10, 11], pregnant, or weight over 300 lb (equivalent to 136.1 kg) [12]. One study had stringent criteria that excluded HIV-infected and underweight patients, as these may become confounding factors for BMD [13].

Two studies had reported a significantly lower BMD in the male MMT population compared to age-matched and weight-matched male control [11, 12]. Gotthardt et al. [10] also reported a significant difference in terms of BMD between OST patients and control. However, the analysis conducted did not stratify into three groups (BMT, MMT, and morphine), so specific treatment effects on BMD could not be concluded as different OST may have different effects on BMD. Analyses of opioid intake factors such as duration and dose of either total opioid or OST intake were not significantly associated with BMD [10, 34]. In the female population, the difference between the MMT population and control was not significant [11, 13]. In contrast, a prospective cohort study of women with or at risk of HIV reported methadone use was one of the factors significantly associated with lower BMD [14]. The differing result may be explained in terms of methodologies. Both Grey et al. [11] and Milos et al. [13] were case-control studies, comparing the BMD between OST and healthy controls. Sharma et al. [14], on the other hand, conducted a prospective cohort study of women in the menopause study cohort who were at-risk or infected with HIV.

In terms of BMI, one study reported a significant association between BMI and BMD in men on OST [10]. The results remained significant in multivariate analysis. The underweight group had significantly lower BMD, while the overweight group had significantly higher BMD compared to the normal BMI group. Another study also reported a similar finding [14]. The results were similar to other studies in the general population [37-41]. The mechanism of increased BMD in overweight or obese patients might be attributed to the increase in mechanical loading as well as elevated estrogen, leptin, and insulin, which induce osteogenesis and inhibit bone resorption [42].

One study had reported that a longer duration of heavy alcohol consumption was associated with lower BMD [34]. Similarly, Kim et al. [43] reported a significant association between chronic alcohol intake among patients without liver disease. In contrast, Grey et al. [11] reported that current alcohol use was not associated with BMD in multiple regression analyses. The different findings might be attributed to the differences in terms of the definition of alcohol use and analyses conducted. Kim et al. [34] investigated the association between the duration of heavy alcohol use and BMD. They defined heavy alcohol use as persistent alcohol use for more than three drinks on more than three occasions per week for at least one year. On the other hand, Grey et al. [11] defined recent alcohol use loosely, without any pre-specified amount, frequency, and duration. The effects of alcohol on BMD may be different, depending on the amount of alcohol intake. Multiple studies in other population had reported an improvement in BMD with moderate alcohol intake [44-47].

The generalisability of the included studies were limited due to several factors: 1) small sample size; 2) recruitment from a single center; 3) some had stringent eligibility criteria; 4) different exposure (correlates) definition and selection. These factors hindered meta-analysis for the current study. The majority of the studies were cross-sectional, hindering the temporal association from being made. Moreover, the primary OST type in the included studies was MMT, and no specific analysis was conducted to clarify the effect of other forms of OST treatment such as BMT. Despite numerous limitations, this review gives insights on the potential risk factors and may enhance further research on this under-researched field. The direction of the future studies should emphasize on larger sample size, the replication of the study in different populations (other regions), cohort studies, the study of effects of other types of OST (such as BMT) on BMD, and inclusion of various potential risk factors which may contribute to low BMD in the OST population. Other potential areas include machine learning and artificial intelligence that for bone mineral density outcome prediction, which may include various data such as biomarkers.

The researchers are supported by Universiti Kebangsaan Malaysia through Faculty of Medicine, Research Grant (FF-2020-323).