Methods: TSCC patients were extracted from the Surveillance, Epidemiology and End Results (SEER) database between 2010 and 2014. We examined the association between clinical manifestations and distant metastases using Chi-squared tests. Predictors of 5-year survival were assessed using univariate and multivariate analyses.

Results: A total of 6193 patients were analyzed and lung was the most common site of distant metastases. Poorly/undifferentiated differentiation was found to be significantly correlated with lung metastasis (p=0.033) and liver and bone metastases were associated with African American (p=0.000 and p=0.000, respectively). A higher T classification was associated with higher prevalence of lung, liver, bone and brain metastasis (p=0.000, p=0.000, p=0.000 and p=0.007, respectively). The same results were found in N classification in lung, liver, and bone metastasis (p=0.000, p=0.000, and p=0.000, respectively). Worse prognosis was associated with older age, Blacks, lower grade, higher T and N classification, no surgery therapy and more metastatic sites.

Tonsil squamous cell carcinoma (TSCC) is one of the most common oropharyngeal neoplasm and the incidence rates of TSCC have significantly increased in recent decades [1-3]. Several studies have described the association between the clinicopathological characteristics, including age, tumor size, tumor grade, tumor stages at presentation, and lymph node or distant metastases and clinical outcomes of TSCC. Up-front surgery followed by adjuvant therapy, if appropriate, or radiotherapy alone has been the principal treatment modality for early-stage TSCC and postoperative radiotherapy has been used for close or positive resection margins, T3-4 tumors, and neck node metastases [4].

Metastases are the main cause of human cancer deaths, and its treatment continues to be a major challenge. The identification of factors associated with distant metastases is of paramount relevance for therapeutic planning. Our goals were to analyze the prevalence proportions and prognosis of synchronous distant metastases in patients with TSCC using the Surveillance, Epidemiology, and End Results (SEER) database.

We obtained data from the current SEER database, which consists of 18 population-based cancer registries. This database collects and publishes cancer prevalence and survival data covering approximately 28% of the total population in the United States. SEER*Stat Version 8.3.4 (http://www. seer.cancer.gov/seerstat) from the National Cancer Institute was used to identify eligible patients in this study. Because the SEER database began collecting information on the presence or absence of metastases at the time of diagnosis in 2010, we included patients diagnosed with microscopically confirmed TSCC between 1 January 2010 and 31 December 2014. We selected patients with only one primary malignancy in their lifetime. We excluded patients mainly because of lack of pathology type of tumor, unknown racial information, unstaged tumors or 'blanks' metastatic site. In total, 6193 TSCC patients were eligible for inclusion in the prevalence analyses.

Descriptive statistics were used to examine the baseline characteristics of the patients. The primary study outcomes were overall survival (OS) and cancer-specific survival (CSS). OS was defined as time to the date of death due to any cause or the date of last follow-up. CSS was defined as time from initial treatment to death due to cancer. Kaplan-Meier survival curves were compared using the log-rank test. Hazard analysis was conducted using the Cox proportional hazards model. SPSS software, version 22.0 (SPSS, Chicago, IL, USA) was used for additional data processing. A probability value (p value) of < 0.05 was considered statistically significant for all tests.

Clinical Characteristics of all patients 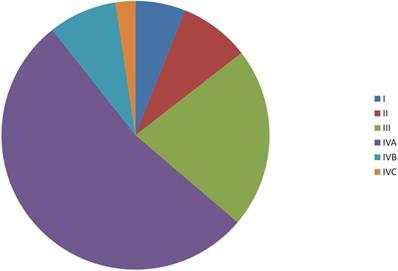 Demographic characteristics of patients with and without metastases

As shown in Figure 2, 5-year CSS are 93.6% and 84.5% for localized and regional TSCC patients, respectively, which are much higher than metastatic TSCC patients (62.6%). The same results were found in OS.

In this study, 6193 patients with TSCC were evaluated and 86 (0.13%) patients had synchronous distant metastases at diagnosis. In the present series, the niches of distant metastasis were predominantly located in the lungs, bones, liver and brain, in accordance with the literature [5]. We observed some interesting relationships between the clinicopathological characteristics and distant metastases patterns. For instance, liver and bone metastases were associated with African American. Nabil et al. found that TSCC in white men is likely human papillomavirus (HPV) driven, and Frederic et al. found that HPV-negativity are factors associated with the development of distant metastases, which could partly explain the observed ethnic-based differences [6, 7]. However, absence of information about HPV and/or p16 status of the patients in the current analysis prevented us to adjust our analyses for these important factors. What's more, advanced T classifications increased the risk of distant metastases and advanced regional disease (N2 or N3 disease) are found in patients with M1 disease, which were consistent with many other studies [7-10].

A number of variables influencing the prognosis of TSCC have been described previously (Table 3). In the present study, eight clinicopathological factors were found to be associated with patient OS by univariate analysis, including age, race, grade, primary site, T classification, N classification, distant metastases and surgery therapies. Based on the present study, Caucasian was associated with a better prognosis than Asian and African American. In terms of age, several reports have shown that patients' age is one of the prognostic factors in oropharyngeal carcinoma including TSCC [11, 12]. The differential protective effect of marriage based on HPV infection, which correlated with favorable prognosis, was more frequently observed in younger Caucasian patients than in the elderly [13]; therefore, old aged African American could be secondary surrogates of poor tumor biology which is unrelated to HPV infection. Unfortunately, because the HPV and/or p16 status of patients in the present study was unknown, this hypothesis could not be tested. Regarding that many recent studies for altering therapy based on HPV status are in progress, the lack of details of HPV status in this study has significant limitations [14]. 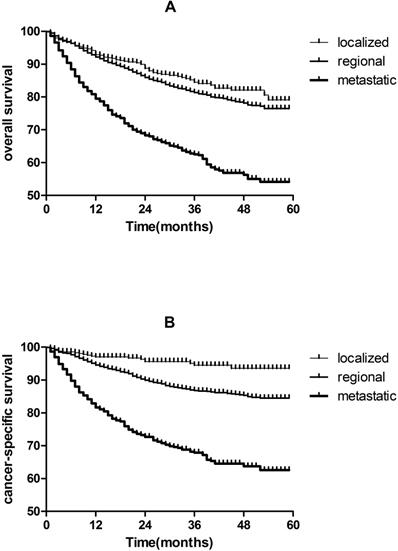 Furthermore, early diagnosis and treatment are particularly important; especially the incidence of TSCC has increased in past 3 decades [2, 3, 15, 16]. We observed that 5-year CSS are 93.6% and 84.5% for localized and regional TSCC patients, respectively, which are much higher than metastatic TSCC patients(62.6%). we observed the same pattern of associations for OS (Figure 2).

This is the first population-based analysis assessing prevalence proportion and prognostic factors of distant metastases of TSCC patients. Some limitations of our study should be acknowledged. First of all, the SEER database only provides information about four sites of metastases at diagnosis: bone, brain, lung, and liver. We don't have information of metastasis to other sites, which may influence the prognostic assessment of the metastases group. Second, the lack of data on additional predictors of OS such as HPV and/or p16 status, performance status, comorbidities, chemotherapy and/or postoperative radiotherapy, positive surgical margins at final pathology prevented us to adjust our analyses for these important factors.

We acknowledge the support of the Department of Radiation Oncology, Fudan University Shanghai Cancer Center. The views expressed in this publication are those of the authors.

The datasets used and/or analysed during the current study are available from the corresponding author on reasonable request.

The study was funded by the National Key Technologies Research and Development Program on Prevention and Control of Chronic Non-communicable Diseases (Grant No. 2018YFC1313204).

Yujiao Li and Chaosu Hu have made substantial contributions to all of the following: (1) the conception and design of the study, or acquisition of data, or analysis and interpretation of data, (2) drafting the article or revising it critically for important intellectual content, (3) final approval of the version to be submitted.