Gastric cancer is one of the most common malignant tumors in China. However, it is difficult to diagnose in early stage, with a poor prognosis. In this way, patients often do not realize until cancer progresses to middle and advanced stages. Although chemotherapy can improve the survival rate, the median survival is still less than one year [1] and the effect of molecular targeted drugs are not ideal [2]. Therefore, the general treatment for advanced gastric cancer is mainly combined therapy. In recent years, some work has suggested that CSC-G is the root cause of recurrence, metastasis and drug resistance [3, 4]. Therefore, the paper presents the role of CSC-G in invasion, metastasis and tumor angiogenesis.

Before CSCs were first isolated and identified in hematological diseases in the 1960s, it was found that a small type of CSCs with self-renewal and differentiation capacity exists within various types of solid cancers, such as colon cancer, breast cancer, liver cancer, lung cancer and pancreatic cancer [4]. This capacity has also been validated, including self-renewal, efficient DNA repair and multilineage differentiation; even very few CSCs could significantly promote cancer growth, recurrence and metastasis [5]. CSCs could maintain self-renewal through asymmetric division, and proliferation and infiltration through symmetrical division [6]. Previous studies have shown that CSCs enriched after neoadjuvant chemotherapy or conventional treatment, which may be the main cause of recurrence [6, 7]. Therefore, with respect to the specific biological characteristics of CSCs, we should incline to develop more specific molecular targeted drugs for the treatment of gastric cancer.

As the start of cellular reprogramming in 2006, Yamanaka induced fibroblasts to reprogram and differentiate into pluripotent embryonic stem cells via OCT4, SOX2, C-Myc and Klf4 [8]. With the research furtherly developed, reprogrammed cell is not limited to specific cell type and specific differentiation stage, somatic cell from different tissue sources could be reprogrammed into corresponding pluripotent stem cells or corresponding disease cell models, such as gastrointestinal epithelial cells and somatic cell from different disease models [8]. At present, OCT4, SOX2, C-Myc and KLF4 are considered as the core transcription factors that maintain the self-renewal capacity, and highly expressed in a variety of cancers, such as bladder cancer, prostate cancer, chronic myeloid leukemia, glioma, orthotopic colon cancer, lung adenocarcinoma, and pancreatic cancer [9-11]. Domestic and foreign researches have shown that several types of CSCs have significant differentiation potential, and could form endothelium and complex 3D glandular structures in vitro [6], such as in embryonic stem cells and CSC-G.

In the early stage, cancer cells could get nutrition to sustain growth mainly through tissue infiltration, if the nutrition could not be provided by neovascularization, cancer cells will be in a long-term inhibition state [12, 13]. Therefore, angiogenesis is an important part of the therapeutic regimen. From professor Folkman putting forward the angiogenesis theory in the 1970s to the first anti-tumor angiogenic molecular targeted drug approved by the FDA, angiogenesis mechanism has been studied and perfected for more than 30 years [14]. It is acknowledged that fresh capillary is generated from existing capillaries by means of “sprouting” [14]. Nevertheless, the latest experimental evidence suggests that CSCs differentiate into vascular endothelium to participate the angiogenesis. The capacity of CSCs differentiating blood vessels was first derived from the study of glioma CSCs, and CD133+ CSCs could directly differentiate into vascular endothelial cell in vivo and in vitro [15]. Some studies have shown that bevacizumab could reduce the blood supply, meanwhile, it could also induce and accelerate invasion, recurrence and metastasis; the main reason being that vascular endothelial cells are derived from the CSCs, which can resist vascular molecule target drugs [16].

Extraction of total RNA and RT-PCR

Paraffin embedded cell slide and tissue slice were were dewaxed to water (the cell slide were hydrated), washed with PBS for 3 times with 5 minutes each time. Next, the antigen was repaired by 0.01 M sodium citrate buffer solution (pH 6.0) with water -bath heating to about 95°C for 15 minutes. Then, the antigen was sealed at room temperature with goat serum sealant for 30 minutes, and the excess sealant was removed. Furthermore, anti-incubation tissue slices (cell creeping slices) were taken out by overnight dripping of anti-50 ul anti-incubation. When temperature went room temperature for 30 minutes, the PBS was used for washing three times with 5 minutes each time. 50 ul of bivalent antibody was added and was incubated at room temperature for 30 minutes. Additionally, PBS was used to wash for three times, DAB was used to develop color at room temperature for 3-7 minutes, distilled water was used to wash and hematoxylin was used for re-dying for 1-3 minutes, sealed using gum after dehydration and observed under microscope.

The cells were starved for 12-24 hours. Culture medium containing 600 µL 20% serum concentration was then added into every well of a 24-well plate. Next, 200 µL cell solution (2×105/mL) was added into the transwell chamber, and the chamber was placed into the transwell well. After culturing in an incubator, we calculated the number of cells that penetrated the membrane at different time points, wiped off the cells in the inner chamber using a cotton swab, fixed the migrated cells using methanol, stained the cells using crystal violet, and observed the semipermeable membrane using a microscope.

Cells were plated on a six-well plate (5×105 cells/mL). After the cells spread over the plate, a pipette was used to draw a horizontal line at the back of the six-well plate, then the plate was washed with PBS and placed in an incubator containing serum-free RPMI 1640 medium for 24 hours. An optical microscope was used to observe migration at 0 and 24 hours, and the results were photographed. ImageJ software was used to measure the width of the scratch area at 0 and 10 hours. The migration speed was quantitatively compared by calculating the difference in the distance between the two edges of the scratch between 0 and 10 hours.

The matrigel matrix was diluted 1:3 with serum-free matrix (on the ice). Next, matrix was dispensed in 96-well plates evenly, after culturing in an incubator at 37°C for half an hour, air drying for standby application. The cells within logarithmic growth phase were starved for 12-24 hours and adjusted the cell density of 2×105. Finally we added the adjusted cell liquid to air-dried matrix, observed the number of cyclization after culturing at 37°C for 8 hours.

10 NOD/SCID mice were randomly divided into two groups with 5/group. According to the random number table, 1×106 SGC7901 cells and CSC-G suspension cells were injected subcutaneously in the right back of each nude mouse. During the two weeks, Tumor volume was monitored and calculated according to the formula:

by measuring tumor length and width every 2 days. At the end of second week, each mouse was euthanized (by cervical dislocation), and the tumor was removed for weighing.

Comparison of the expression of mRNA and proteins

Cellular immunohistochemistry revealed the positive rate of OCT4 and SOX2 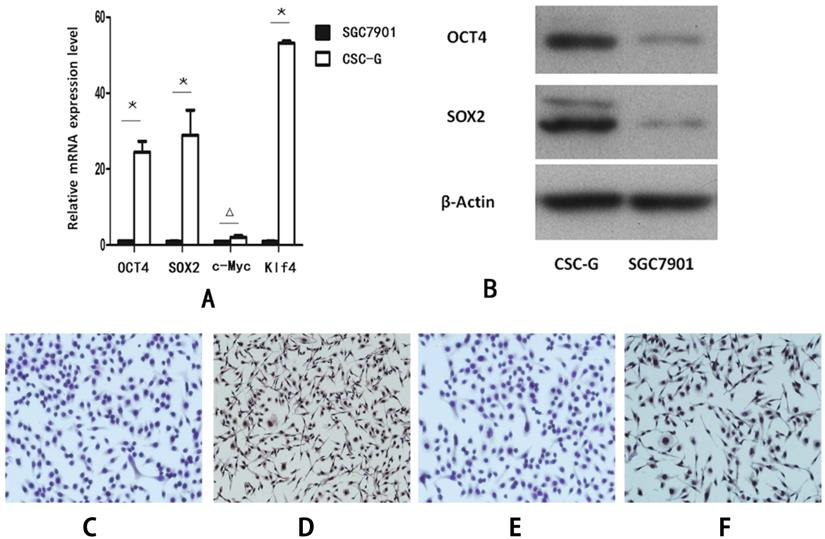 (A) The cell migration image of the 0th and the 24th (B) Comparison of the migration distance in SGC7901 and CSC-G.

The migration capacity of different cells was compared with 0.1% crystal violet staining (x 100 times). (A) SGC7901 (B) CSC-G (C) The number of cells in each cell passing through the basement membrane in the migration experiment.

Comparison of cell invasiveness, 0.1% crystal violet staining (x 100 times). (A)SGC7901 (B) CSC-G (C) The number of cells in each cell passing through the basement membrane in the invasive experiment. 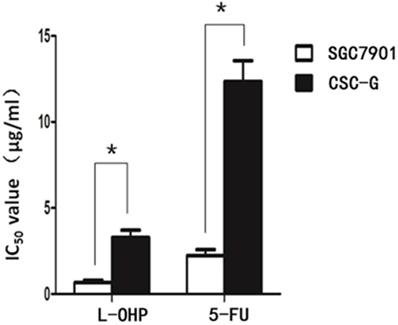 The final weight of transplanted tumor of CSC-G and SGC7901 was (0.624 ± 0.036) and (0.164 ± 0.010), respectively. Compared with SGC7901, the weight for CSC-G was significantly heavier (P<0.05). Tumor volume measurements in mice demonstrate that SGC7901 showed a slower increase in tumor volume compared with the CSC-G. This showed that overexpression of CSC-G led to a greater tumorigenic ability (Figure 10A-C).

Immunohistochemistry detecting the expression levels of OCT4 and SOX2

Tumor tissue was taken out from nude mice for histology, and the protein expression level of OCT4 and SOX2 was detected by immunohistochemistry. CSC-G had stronger OCT4 and SOX2 staining than SGC7901 (Figure 10D).

In recent years, great progress has been achieved in gastric cancer, but the pathogenesis is still not very clear. With the deepening the relationship between cancer and stem cell, more and more people believe that cancer is a type of stem cell disease [17], which opens a new field for the research and treatment of gastric cancer. The concept of CSC had been put forward as early as one century ago. In 2001, Reya et al. supplemented and enriched the theory of CSC through the study of hematologic cancer and hematopoietic stem cell [18]. In 2006, American Association for Cancer Research (AACR) defined cancer stem cells as a small group of tumor cells with self-renewal and multiple differentiation potential [18]. In recent years, many reports indicated the CSC in various types of solid tumors, such as brain tumor, breast cancer, colon cancer, prostate cancer and liver cancer [19-25]. However, there are relatively few reports related to gastric cancer stem cell. Until 2009, Takaishi et al first isolated cancer cells with stem cell characteristics in multiple gastric cancer cell lines [26]. Many cancer arise from mutations of the adult cells, but the gastrointestinal epithelium updated quickly, it is difficult to cause malignant lesions, while the mutation of stem cell with a very long lifespan is more likely to accumulate and eventually cause cancer, so it is widely believed that gastric cancer arises from the mutation of gastric adult stem cell [27]. 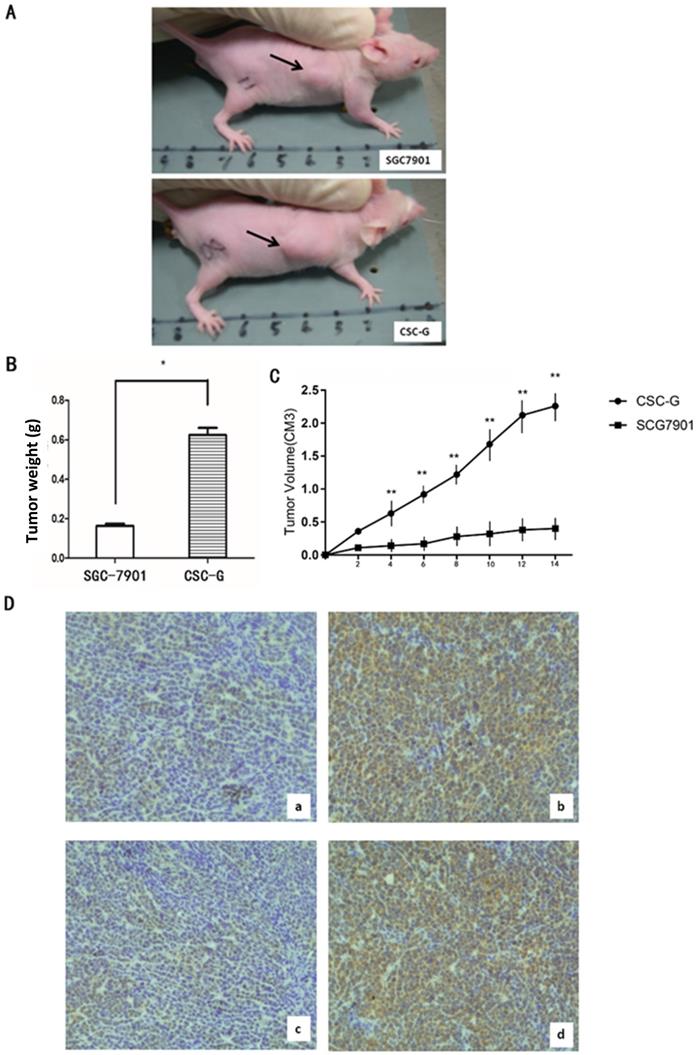 In our study, we found that CSC-G has stronger migration ability compared with SGC7901, and could form vascular loop structure in vitro, which suggested that CSC-G played a vital role in the angiogenesis. Recent studies have concluded that there is a strong relationship between CSC and cancer angiogenesis, so anti-cancer angiogenesis therapy is difficult to achieve the desired effect [34]. Cancer angiogenesis is essential for growth, formation and maintenance [35]. Compared with cancer cell, CSC showed stronger tumorigenesis and formation ability, not only CSC have self-renewal and proliferation ability, but also could promote tumor angiogenesis [36]. CSC promote cancer angiogenesis via several mechanisms include: over-expression of several angiogenic factors, such as VEGF, angiopoietin, EGF. Some recruiting host cells could secrete angiogenic factors including macrophages, lymphocytes, fibroblasts [37]. Extracellular matrix and cancer stem cells could secrete proteins and enzymes to promote angiogenesis; CSC could differentiate into cancer vascular progenitor cells and endothelial cells, which are directly involved in the angiogenesis or the formation of tubule structures without endothelium to participate in the cancer microcirculation [38, 39].

Conventional anticancer therapy is mainly to kill differentiated and highly proliferative cells, while CSC is in the resting stage of proliferation, poorly differentiated or undifferentiated stage, which could escape chemotherapy, initiate and maintain the subsequent progress of tumors via anti-apoptosis mechanism. Overall, we may conclude that the invasiveness, tumorigenicity, drug resistance migration and angiogenesis capability of gastric cancer cell is significantly higher than cancer cell, as well as the expression of several markers, thus promising a new target for managing gastric cancer, we could study some targeted molecular drugs targeting to marker gene such as CD44, OCT4, SOX2 and Klf4, and we could also dedicate to study some drugs to inhibit cancer angiogenesis to eliminate the gastric cancer. However, several limitations to the study should be acknowledged. First, multiple types of GC cells should be performed to prove our point. Second, more NOD/SCID mice could be used to increase reliability of our study. Third, further biological experiments should be performed to reveal the underlying mechanism. Fourth, it failed to identify the underlying mechanism as to how CD44, CD133, OCT4, SOX2 take a part in the recurrence and metastasis of gastric cancer. Therefore, more studies urgently need to be carried out so as to benefit people with gastric cancer.

We may conclude that the invasiveness, tumorigenicity, drug resistance migration and angiogenesis capability of CSC-G were significantly higher than cancer cell, as well as the expression of marker genes. Therefore, the existence of CSC-G might be a mechanism of gastric cancer recurrence, metastasis, and drug resistance.

We thank all the members for their generous participation.