Cancer is a major disease that has become a threat to human health in recent years. Lung cancer causes about 27% of all cancer deaths and has the highest morbidity and mortality among malignant diseases worldwide [1, 2]. Immune checkpoint inhibitor, programmed death (PD)-1, is mainly expressed on the membranes of activated T cells and monocytes [3]. PD-1 performs an essential function in the tumor immune escape [4-7]. The main ligand of PD-1 is program death ligand-1 (PD-L1), which is expressed not only on the membrane of normal cells but also of lung cancer cells [8]. By blocking the interactions of PD-1 and PD-L1, the immune system can be reactivated to fight lung cancer [7]. PD-1 inhibitors, such as pembrolizumab and nivolumab, have been approved by regulatory authorities for the treatment of non-small cell lung cancer [9, 10]. Although therapeutic strategies targeting the interactions of PD-1 and PD-L1 have recently shown promising clinical outcomes in lung cancer, challenges remain. Not all patients will benefit from these antibody drugs, and the mechanism still requires further investigations.

Immune cell therapy is a vital part of tumor therapy. Natural killer (NK) cells are critical innate immune cells [11], which can directly kill tumor cells by secreting perforin and granzyme and through an antibody-dependent cell-mediated cytotoxicity effect [12]. They can also inhibit the proliferation of tumor cells by secreting interferon-gamma (IFN-γ) [13]. NK cells play an essential role in lung cancer progression; the infiltration of NK cells in tumor tissues is related to a favorable prognosis in patients with lung cancer [14-16]. Moreover, the cytotoxicity and IFN-γ secretion abilities are significantly lower in peripheral blood NK cells from patients with lung cancer than in controls [17]. Hence, exploring the mechanisms of NK cell dysfunction is very meaningful for the treatment of lung cancer.

PD-1 mediates the functional defects in NK cells found in some cancers, such as Kaposi sarcoma and multiple myeloma [18-20]. Blocking signal transmission between PD-1 and PD-L1 has been shown to restore the antitumor function of NK cells [21, 22]. However, the characteristics of PD-1+ NK cells in lung cancer have not been evaluated. Therefore, whether the dysfunction of NK cells is associated with PD-1 expression in lung cancer requires deep investigation.

Recently, extensive studies on the functions of various cytokines in tumor development have been performed. The concentration of IFN-γ in plasma has been related to the response to PD-1 inhibitors in lung cancer, indicating that cytokines may be pivotal for the development of lung cancer [23]. Whether plasma cytokines in lung cancer patients will affect the expression of PD-1 in NK cells, and whether they are related to NK cell dysfunction are worth extensive studies.

Therefore, in this study, we determined the ratio of PD-1+ NK cells and the level of cytokines in the plasma of lung cancer patients and ascertained their correlation. We also evaluated the antitumor functions of PD-1+ NK cells.

After our hospital's ethics committee approved the study, sixteen newly diagnosed lung cancer patients and sixteen healthy adult volunteers were enrolled, and informed consent was obtained from all participants. In order to avoid the effect of the age and gender, the age and gender of the healthy adult volunteers are matched with that of lung cancer patients. Additionally, the study strictly complied with the Declaration of Helsinki. The characteristics of all participants are listed in Table 1 and Table 2, respectively.

After separation from blood cells via centrifugation at 1,800 × g and 23 °C for 10 min, the plasma was collected for cytokine detection. Blood cells were suspended in normal saline and centrifuged at 800 × g and 23 °C for 30 min to obtain peripheral blood mononuclear cells (PBMCs) using Ficoll (Nycomed Pharma AS, Oslo, Norway).

K562 cells were labelled with Calcein-AM (Dojindo Laboratories, Kumamoto, Japan) at 37 °C for 30 min. After washing with PBS, 5×103 Calcein-AM-labelled K562 cells were added to a 96-well plate with 100 μL RPMI-1640 medium (Gibco, Grand Island, NY, USA). PBMCs were added to the wells at effector-target ratios of 20:1 in 100 μL medium. Spontaneous release was obtained by incubating the target cells in medium alone, and maximum release was obtained after treatment with 1% Triton X-100. All experiments were performed in triplicate wells. Cytotoxicity was calculated according to the following formula: [(experimental release - spontaneous release)/(maximum release - spontaneous release)] × 100%[24].

PBMCs were incubated with or without interleukin (IL)-2 for 2 days. The cells were then incubated with mouse mAbs against human CD56 (FITC), CD3 (PerCP), and PD-1 (APC). The control groups were stained with isotype-matched antibodies. After one wash with PBS, the cells were detected by the FACSCalibur cell analyzer. The data were analyzed as above.

Intracellular staining was carried out according to the manual of the BD Cytofix/Cytoperm™ kit (BD Biosciences). Briefly, PBMCs were harvested and adjusted to 1 × 106 cells/mL. The cells were incubated with 0.1% GolgiStop (BD Biosciences) in an incubator for 4 h. The cells were incubated with mouse mAbs against human CD56 (FITC), CD3 (PerCP), and PD-1 (APC). These were followed by intracellular staining with mouse mAbs against human perforin (PE), granzyme B (PE), or IFN-γ (PE) (BD Pharmingen, San Jose, CA, USA), as well as the isotype control antibodies. After one wash with PBS, the cells were detected by the FACSCalibur cell analyzer. The data were analyzed as above.

As previously described, the expression of CD107a was used to assess the cytotoxicity ability of NK cells [25, 26]. PBMCs and K562 cells were incubated at a ratio of 10:1. A mouse mAb against human CD107a-PE (BD Biosciences) and an isotype control antibody were added to the cells. Following stimulation with K562 cells for 1 h, 0.1% GolgiStop was added. After another 3 h incubation, the cells were collected and stained with mouse mAbs against human CD3 (PerCP), CD56 (FITC), and PD-1 (APC). After one wash with PBS, the cells were detected and analyzed as above. 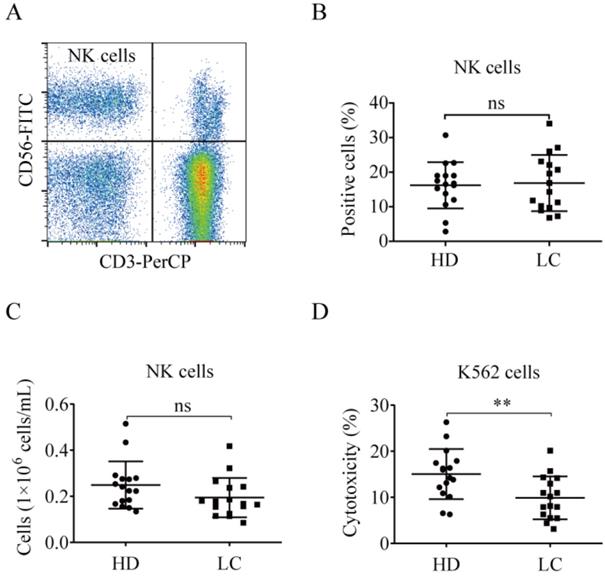 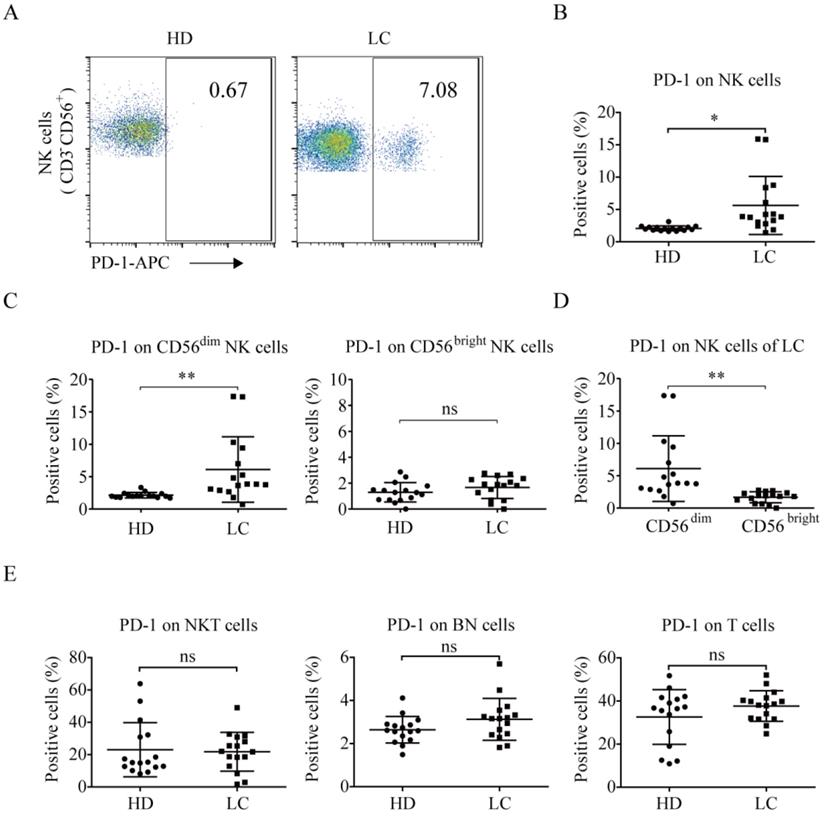 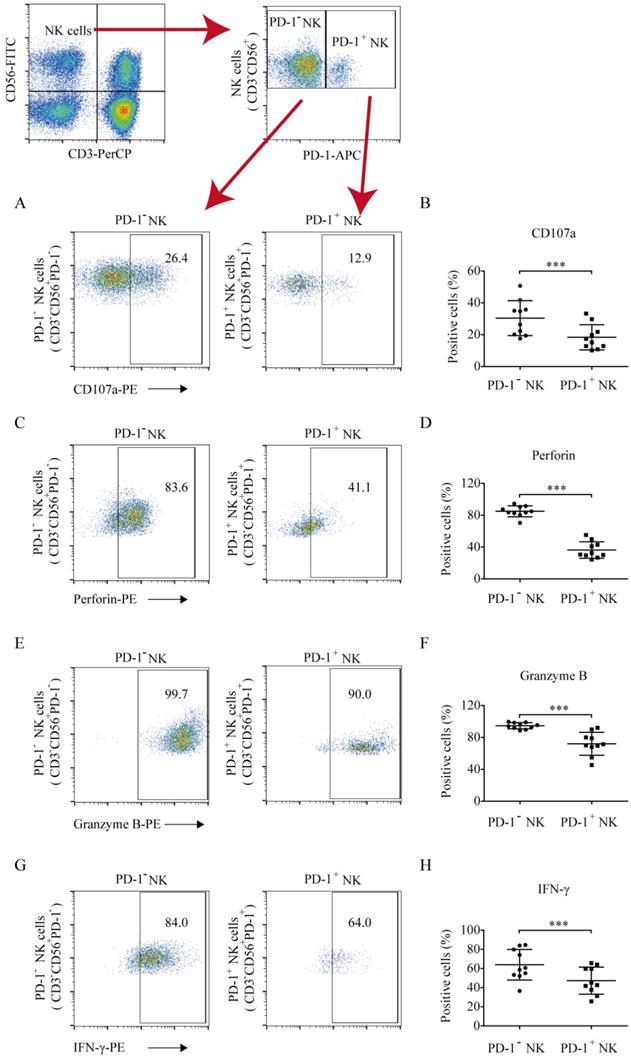 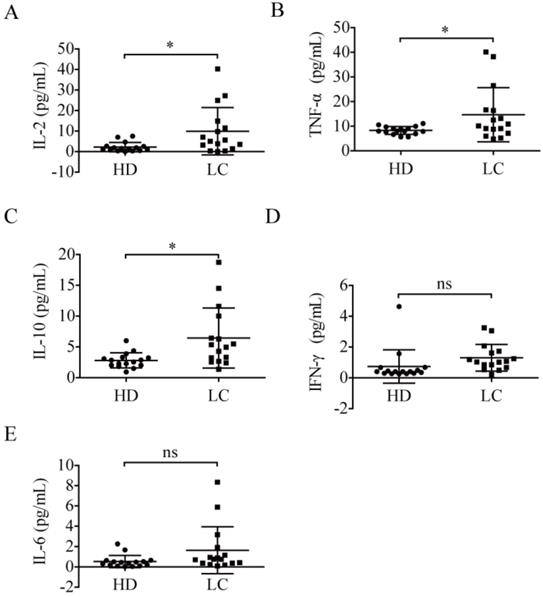 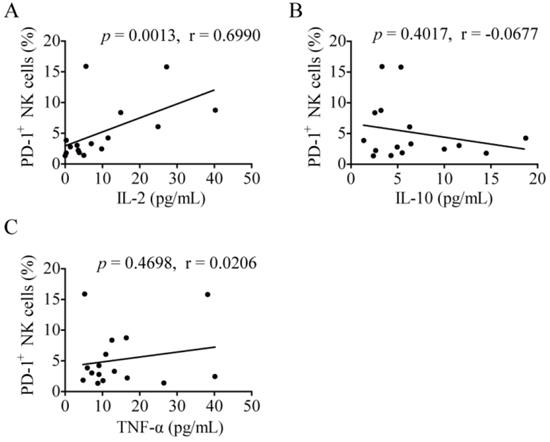 NK cells are natural immune cells, which perform an important function in tumor immunosurveillance [28, 29]. Solid tumors are reportedly characterized by decreased cell numbers and functional defects in NK cells [17, 30]. We found that the antitumor function of NK cells in the peripheral blood of lung cancer patients was diminished compared to that in the healthy control donors, and the PD-1+ NK cell ratio in the lung cancer patients greatly exceeded that of the healthy individuals. More importantly, PD-1+ NK cells were less potent in secreting IFN-γ and had lower antitumor effects than PD-1- NK cells, suggesting that the accumulation of PD-1+ NK cells in lung cancer may be responsible for the dysfunction of NK cells. Although, the features of PD-1 in T cells have been thoroughly analyzed [31-34], its features on NK cells have not been explored extensively, and some findings from different tumor types are controversial. Some studies have shown that PD-1+ NK cells are functionally defective [19, 20, 35], whereas results of others suggest that they are activated NK cells [36, 37]. In lung cancer, we found that perforin, granzyme B, IFN-γ, and CD107a were lower in PD-1+ NK cells than those in PD-1- NK cells. Hence, our findings support the theory that high PD-1 expression on NK cells counteracts the antitumor function of NK cells.

CD56dim and CD56bright NK cells are two subsets of NK cells. We observed that PD-1 was mainly expressed on the surface of CD56dim NK cells from the patients of lung cancer, which is consistent with the findings in ovarian cancer and non-tumor infected patients [38]. In esophageal squamous cell carcinoma, the increased proportion of PD-1+ NK cells has been related to poor prognosis [20]. Therefore, we wanted to explore whether the enhanced percentage of peripheral blood PD-1+ NK cells could be used as a prognostic indicator for lung cancer. Unfortunately, due to inadequate numbers of participants involved and insufficient observation time in this study, the relationship between PD-1+ NK cells and lung cancer prognosis could not be determined. Therefore, further studies should widen the scope of this meaningful comparative analysis.

Given that the expression of CD107a has been considered as a sensitive marker for determination of the cytotoxic activity [41], to assess the cytotoxic activity of PD-1+ NK cells, we performed CD107a tests, rather than a cytotoxicity assay of NK cells on tumor cells. Insufficient quantity of PD-1+ NK cells from patients had been the primary limitation of the present study. Although the proportion of PD-1+ NK cells in lung cancer patients is higher than that in healthy individuals, it is still relatively low. To get enough PD-1+ NK cells for detection of cytotoxicity, approximately 1 L of peripheral blood per patient is needed, which is beyond the scope of responsible patient care. In future research, we plan to construct a NK cell line expressing PD-1 and conduct a thorough research on the antitumor effect of PD-1+ NK cells and the mechanisms underlying the PD-1 regulation of NK cell function.

In conclusion, this study reveals a subset of NK cells with high expression of PD-1 in the blood of the patients with lung cancer, and the abundant of these PD-1+ NK cells may be related to the increased concentration of IL-2 in the plasma of the patients. Moreover, the antitumor activity of PD-1+ NK cells is lower than that of PD-1- NK cells. These results further support the notion that PD-1 downregulates the antitumor effect of not only T cells but also NK cells. Given the importance of NK cells in antitumor immunity, our work provides a rationale for blocking the PD-1 and PD-L1 axis to rescue the dysfunction of NK cells in cancers including lung cancer.