Methods: We retrospectively analyzed 179 patients with stage I lung adenocarcinoma after complete surgical resection. The pathological classification was according to the IASLC/ATS/ERS adenocarcinoma classifications, and the detailed abundance ratio using HE staining of primary tumor specimens was recorded. A new additional scoring formula on the pathological features (ASP) was established. The association of the ASP score with the patients' survival was examined.

In recent years, adenocarcinoma has ranked as the most important pathological type of lung cancer. As such, early screening programs for high-risk populations have been developed, and its incidence is increasing gradually year by year around the world [1,2,3]. Although the diagnosis and treatment of lung cancer continues to progress, resulting in an improved prognosis [4,5] lung adenocarcinoma, as a representative of tumor heterogeneity, has a poor prognosis due to its characteristics of early metastasis and recurrence [6,7]. Even in stage I lung adenocarcinoma, the five-year survival rate is still 70%, and 30% high-risk patients tend to experience tumor progression [8,9,10]. Therefore, how to differentiate the high-risk group from stage I lung adenocarcinoma patients after surgery has become an urgent clinical problem to be solved.

In clinical practice, evidence supporting the further treatment of patients after complete surgical resection of stage I lung adenocarcinoma is lacking [11]. However, we frequently encounter various pathological subtypes from the same lung adenocarcinoma lesion, and its proportion in tumor tissue is also discrepant, due to the tumor's inherent histological heterogeneity. With the introduction and subsequent popularization of the International Association for the Study of Lung Cancer (IASLC), the American Thoracic Society (ATS), and the European Respiratory Society (ERS) lung adenocarcinoma classification systems since 2011 [12], most literature has shown that the prognosis of stage I lung adenocarcinoma patients differs based on the predominant pathological subtype [13,14,15]. However, despite these findings, detailed information on pathological mixed subtypes and the proportion of different morphological structures in the focus of adenocarcinoma has not been attracted sufficient attention. This may be the breakthrough point for identifying high-risk patients from these who the same pathological TNM staging, especially in early lung cancer.

At present, no objective system for evaluating lung adenocarcinoma has been widely accepted, in stark contrast to the situation with other tumors, such as breast, prostate, and kidney cancers [16,17,18]. Therefore, the present study explored a novel pathological risk scoring system of stage I lung adenocarcinoma based on pathological subtypes and the abundance ratio using hematoxylin-eosin staining. We also examined the frequency and clinical significance of additional scoring formula on the pathological features (ASP) in a retrospective series of 179 patients resected for adenocarcinoma of the lung and analyzed its impact on patients' prognosis. Our results indicate that ASP could facilitate the differentiation of high-risk patients from lower-risk ones and leading to appropriate early postoperative intervention.

A total of 244 consecutive patients who underwent radical surgery of the primary tumor and systematic lymph node dissection or sampling at the Department of Thoracic Surgery of Kanazawa Medical University from January 2005 to December 2015 were included in this study. Of these, 179 patients (median age: 68.7 years old; range: 37-83 years old) were confirmed to have stage I lung adenocarcinoma by postoperative pathology (referring to the eighth edition tumor node metastasis [TNM] classification for NSCLC), and all had complete clinical data available with none receiving chemotherapy or radiotherapy prior to the operation. The hospital institutional review board of Kanazawa Medical University approved the protocol.

All enrolled patients were suggested to follow up according to our previous study protocol. The postoperative follow-up time points were every three months within the first year and every six months thereafter. During the follow-up, a physical examination, chest radiography, analysis of blood chemistry and carcinoembryonic antigen assay were performed. If any symptoms or signs of recurrence appeared in these examinations, further evaluations to detect the recurrent site were carried out. Follow-up time was terminated in May 2017 (median follow-up: 46 months).

Formalin-fixed, paraffin-embedded, 3-μm-thick sections were obtained from 179 samples stained with hematoxylin and eosin for the histopathologic diagnosis. Of these, 144 cases had their pathological subtype and abundance ratio (over 5%) from the maximal tumor diameter cross section recorded in the pathological report by two pathologists with a single blind method; the remaining cases lacking detailed pathological information were read again by the senior professor (Dr. Yamada) in order to obtain complete pathological data. 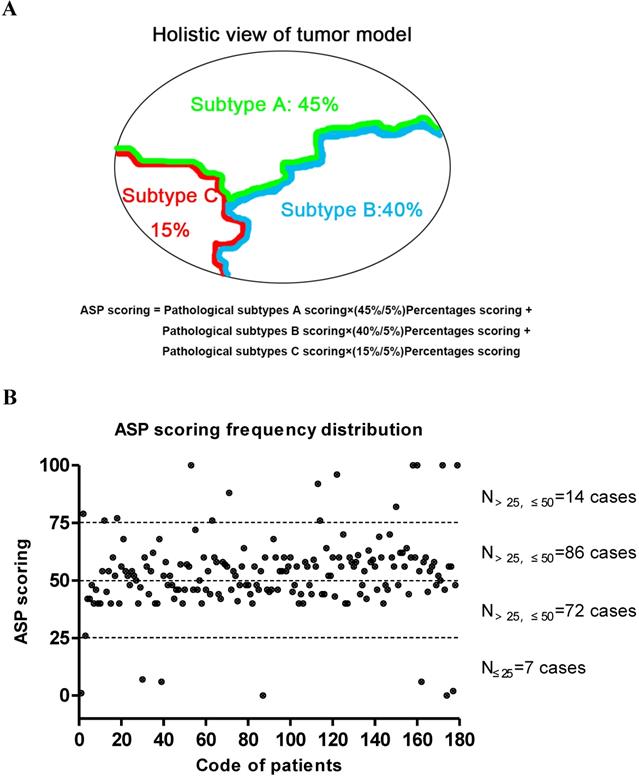 The association between the ASP score distribution interval and clinicopathologic characteristics was assessed by Pearson's chi-squared test. For the correlation analysis of the different ASP score and multiple variables, logistic regression analyses was constructed by the backward selection of multiple variables. Survival curves were calculated using the Kaplan-Meier method. The log-rank test was used to analyze the overall survival time by ASP scores in stage I lung adenocarcinoma. A univariate analysis was performed using the Cox regression model. Data were analyzed using the SPSS 22 software program (SPSS Inc, Chicago, IL, USA). Values of P<0.05 were considered statistically significant.

Correlation between the ASP score distribution and clinicopathologic variables

Patients were divided based on their ASP score into a low-score group (≤50 points; n=79 [44.1%]) and high-score group (>50 points; n=100 [55.9%]) (Table 1). The ASP score distribution was significantly associated with the smoking history (p=0.004), lymphatic vessel invasion (p<0.001), vascular invasion, differentiation (p<0.001) and Ki67 (p<0.001), as seen in Table 2, but not with the gender, age, location or maximum tumor diameter. Furthermore, patients with higher ASP scores tended to have poor differentiation, vascular or lymphatic invasion and abnormally elevated Ki67 expression, which often indicate a poor prognosis. 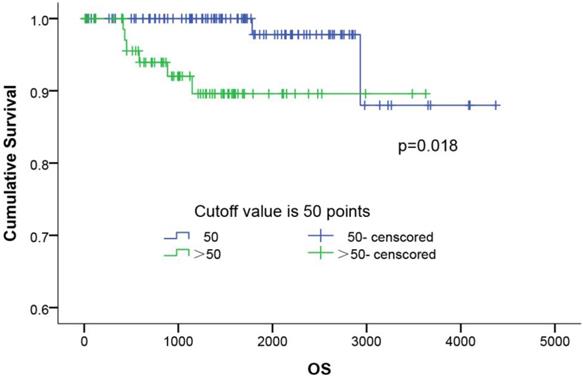 Relationship between the ASP scoring frequency distribution and clinicopathologic characteristics

In the present study, lung adenocarcinoma was frequently encountered in the form of a malignant mixed tumor, including two or more pathological subtypes, and these pathological subtypes showed obvious differences in tumor progression. This phenomenon, known as intra-tumor heterogeneity, may result in different prognoses among similar lung adenocarcinoma patients [21,22,23]. Indeed, Sica et al.[24] and Boland et al. [25] reported that the predominant combinations of pathological subtypes are associated with different prognoses. Although radiotherapy, chemotherapy and molecular-targeted therapy have improved the prognosis of patients with lung adenocarcinoma, 30% of patients with early lung adenocarcinoma still develop tumor metastasis or recurrence after undergoing radical surgery [26]. It has been suggested that the response to adjuvant therapy is unevenly distributed among these patients. Therefore, it is particularly important to distinguish patients at a high risk of recurrence and metastasis from seemingly identical patients who have a lower risk of such outcomes.

Many studies have shown that the assessed differing expression of tumor genes using immunohistochemical staining can effectively predict the prognosis in lung cancer [27, 28], but these bio-markers are only expressed in a certain subgroup of tumor cells and are measured according to pathologists' subjective experience. Furthermore, pathologists from different laboratories can draw opposing conclusions in the same case due to variations in sample processing and experimental techniques. Multilocus detection using second-generation sequencing technology has gradually developed [29, 30], but the costliness of such testing and low device penetration limit its application. In contrast, the approach proposed in the present study has advantages of simple controllability and good practicability. While this process may be time-consuming and laborious, a new additional scoring formula on the pathological features (ASP) reveals crucial information on patients' lesions more comprehensively and accurately, thereby facilitating the differentiation of high-risk patients from lower-risk ones and leading to appropriate early postoperative intervention, and which can be carried out smoothly in most primary-care hospitals. Furthermore, this scoring system also has prognostic implications, as it is capable of stratifying patients into different risk-rank groups for the OS of stage I lung adenocarcinoma and predicting the outcomes of individual patients after an operation. It therefore has potential utility in guiding disease management, similar to what is already being practicing in other organ systems.

Among the total 179 patients with stage I lung adenocarcinoma after complete surgical resection, patients with higher ASP scores tended to have poorly differentiation (p<0.001), vascular or lymphatic invasion (p<0.001) and abnormally elevated Ki67 expression (p<0.001), factors that are closely associated with a poor prognosis. This suggests that the ASP score may be more characteristic in evaluating patients' tumor status. Subsequently, the Kaplan-Meier survival curves also showed that the patients with higher ASP scores (P=0.018) had a shorter OS than those with lower scores. However, cytology or needle aspiration biopsy may not be appropriate for the ASP system that dependent on an adequately sampled resected tumor. While the nuclear morphology and chromatin mitotype usually in estimating of tumor malignant degree were not considered in this scoring system, but ASP was related to vascular invasion and Ki67 expression may indirectly reflect the degree of tumor malignancy to some extent. In the univariate analysis we found the significance of ASP score, but not appeared in the subsequent multivariate analysis (no listed in text). With the increased number of cases and the other clinical features, we expect the ASP system will be applicable not only to phase I lung cancer but also other stages of lung adenocarcinoma in the future. At present, technology supporting an artificial intelligence (AI) diagnosis is developing rapidly; [31, 32] such an approach may reduce the error-bias of supervisor judgment concerning the pathologic diagnosis and save labor costs. However, it may be some time before a mature algorithm and mathematics model can be established. As a short-term solution, the ASP score system for assessing the prognosis of patients can be implemented in basic-level hospitals, although it is admittedly time-consuming and laborious to use. Our method of evaluating whole pathological sections may be used to generate references for an AI prototype algorithm. However, the disease-free survival is more significant than the overall survival we used in predicting the early recurrence and metastasis of lung adenocarcinomas, but we only obtained the cause of death and time of the patients via institutional investigation that was limitation of our study. Therefore, the ASP scoring system needs to be further improved in the follow-up studies, including the acquisition of patients' disease-free survival.

In conclusion, the ASP score can effectively screen high-risk patients for complete surgical resection of stage I lung adenocarcinoma and help inform the early postsurgical management of these patients.

We thank all doctors and staff of the Departments of Pathology and Thoracic Surgery from Kanazawa Medical University for their pathological assistance and direction.

SL.Z. participated in its design, experimentation, analysis and manuscript drafting. X. G., and K. M., collected the clinical data and assisted in making the study design, and T. G., and FZ. L. evaluating the results obtained. S. Y. mainly performed histopathological examinations. H. U. contributed to theoretical organization of the manuscript. CD. G. and H. U. conceived and supervised the study, participated in its design, interpretation, and analysis, including drafting. SL.Z. and FZ. L. contributed equally to this study. All authors contributed to drafting and reviewing the manuscript and approved the submitted and final version.

The study protocol was approved by the research ethics committee at the Kanazawa Medical University (I159). The need for written consent was waved by the Board because of the retrospective nature of the study. The research was conducted in accordance with the 1964 Declaration of Helsinki and its later amendments.

The datasets generated and analyzed during the current study are available from the corresponding author on reasonable request.

This work was supported by Grants-in-Aid for Scientific Research (No: 17K10803) from the Ministry of Education, Culture, Sports, Science and Technology, Tokyo, Japan; the National Natural Science Foundation of China (No: 81803886, 81774078).