Background: The respective and combinatorial roles of surgery, Rituximab and chemotherapy in primary gastric diffuse large B cell lymphoma (PGDLBCL) therapy remained unclear. The purpose of the study was to evaluate present treatment strategies and prognostic factors of PGDLBCL.

Conclusions: Our results suggested that the combinations of chemotherapy and surgery, or chemotherapy and Rituximab, are superior to other treatment strategies for PGDLBCL. IPI and therapy regimens are independent predictors of outcomes. Future prospective trial is warranted.

Primary gastric lymphoma (PGL), following adenocarcinoma,[4] ranked as second most common gastric malignant tumor (2-8%).[5] DLBCL is the main histological subtype of PGL, accounting for 38-59%.[3, 6-8] Gastrectomy used to be the first-line therapy in primary gastric DLBCL (PGDLBCL) two decade ago. However, considering the efficacy and quality of life, more and more non-surgical therapies, such as chemotherapy and radiotherapy, have been used in PGDLBCL patients, especially in the Rituximab era. The optimal treatment for PGDLBCL still remains controversial. We thus conducted a retrospective analysis of 272 cases to evaluate present treatment strategies and prognostic factors of PGDLBCL.

A total of 303 patients with previously untreated PGDLBCL at three centers of CLAP were reviewed between January 1994 and December 2015. Their histopathologic data were identified by the pathology departments according to “the 2008 WHO classification of tumors of hematopoietic and lymphoid tissues”.[9] Imaging and endoscopic examination were used together to define stage and evaluate therapy response. Stage was defined according to the Lugano Staging System for Gastrointestinal Lymphomas.[10] Response criteria were defined according to the International Working Group Recommendation.[11] The analysis was approved by the Medical Ethics Committee of Peking University Cancer Hospital & Institute.

Twenty-four patients did not receive consecutive therapy from each institution, and were excluded from analysis. Among the 279 patients, two patients died as a result of gastrointestinal bleeding before any anti-lymphoma therapy could be administered. Five patients received palliative surgery only (The only goal of palliative surgery was to alleviate obstruction), four of which died as a result of progressive disease within three months after surgery, the fifth patient did not receive other anti-lymphoma therapy after surgery, who was alive as the last follow-up reported (OS 155.9 months). Excepted the seven patients above, the rest 272 patients received either chemotherapy (193 cases) or the combination of chemotherapy and surgery (79 cases). In order to evaluate present treatment strategies, the 272 patients were retrospectively analyzed at last. According to the therapy regimen, patients were further classified into four groups: chemotherapy (C, 80 cases), chemotherapy + surgery (C+S, 50 cases), Rituximab + chemotherapy (R+C, 112 cases), and Rituximab + chemotherapy + surgery (R+C+S, 30 cases). All patients received CHOP-like (the main drugs in CHOP-like regimen was cyclophosphamide + doxorubicin + vincristine ± prednisone) as chemotherapy regimen. The combination of chemotherapy and surgery meant that the patients received a complete resection of gastric tumor first followed by chemotherapy as described above. Radiotherapy was used as palliative therapy only in this study (24 cases).

All patients were followed up from inpatients, outpatients or telephone. Follow up time was defined from the date of diagnosis until death or the last follow-up. Overall survival (OS) was calculated from the date of diagnosis until death as a result of any cause. Progression-free survival (PFS) was measured from the date of diagnosis to the first relapse, progressive disease, or last follow-up. OS and PFS rates were estimated using the Kaplan-Meier method. To identify prognostic variables for OS and PFS, univariate analysis was performed for the baseline clinical features, therapy regimens, and complications. Log-rank tests and Cox regression models were used to analyze the univariate and multivariate impacts of various prognostic factors. All data was analyzed with IBM SPSS Statistics, version 22.0. 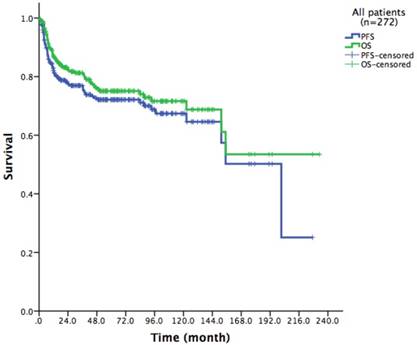 According to the statistics of GLOBOCAN 2018 and GLOBOCAN 2012, both new cases and deaths associated with lymphoid neoplasms increased.[12, 13] While approximately 7.5% of deaths associated with lymphoid neoplasms worldwide occurred in China.[14] This retrospective, multicenter analysis represents the largest sample size so far for PGDLBCL from China. In our study, the 3-year PFS and 3-year OS of the entire cohort were 77.0% and 81.2% respectively. IPI and therapy regimens were highly predictive for both PFS and OS. Because of the special primary site, the treatment strategy of PGDLBCL is not the same as nodal DLBCL. Chemotherapy was the core treatment for PGDLBCL. However, the role of surgery, Rituximab, radiotherapy, and the combinations of several therapies above in PGDLBCL therapy remained unclear. We thus evaluated the role of surgery and Rituximab in PGDLBCL and attempted to determine an optimal therapy combination for these patients.

Patients that underwent surgery had better outcomes than those who only received pharmaceutical intervention, in both PFS and OS (3-year PFS: 82.6% vs. 74.7%, p=0.015; 3-year OS: 87.8% vs. 78.6%, p=0.036). Rituximab could improve OS of PGDLBCL, especially in advanced-stage or high risk (IPI 3-5) patients, while such advantage was not significant in local-stage or low risk (IPI 0-2) cohorts. In previous studies, no difference had been observed between surgery combined with chemotherapy and chemotherapy alone.[15-18] The value of Rituximab remained controversial. Some of studies advocated for Rituximab in PGDLBCL,[19-22] while others held opposing views.[18, 23] All these studies above discussed the value of either surgery or Rituximab in PGDLBCL. While, our study for the first time compared all four commonly adopted regimens: chemotherapy alone, chemotherapy + surgery, chemotherapy + Rituximab, and chemotherapy + surgery + Rituximab. We found that the survival of patients in Group C+S and Group R+C were similar (3-year PFS: 81.4% vs. 81.2%, p=0.551; 3-year OS: 85.4% vs. 87.2%, p=0.948), while patients received both surgery and Rituximab therapy (Group R+C+S) failed to show survival benefit compared to those who underwent either surgery (Group C+S) or Rituximab therapy (Group R+C). These results suggested that chemotherapy alone was not enough for PGDLBCL, and the clinical outcome could not be further improved by adding either rituximab or surgery to the two combinations. Although the effect of surgery and Rituximab were similar. The better therapy choice was varied from different patients. Although we did not observe any post-surgery complications, Koch P reported that surgery increased the risk of bleeding, perforation, and obstruction in perioperative period, leading to postpone of chemotherapy.[24] Furthermore, late complications of surgery, such as malabsorption syndrome, marginal ulcer, and alkaline reflux gastritis, may emerge several years later, which could cause severe nutrition depletion and reduction in the quality of life. In light of these, our team is inclined to choose chemotherapy combined with Rituximab as the first-line therapy for most of PGDLBCL. However, according to our data, treatment-related complications correlated with poorer outcomes (3-year PFS: 50.9% vs. 80.2%, p<0.001; 3-year OS: 52.5% vs. 84.7%, p<0.001). If we predicted that the patients had high risk of bleeding or perforation after receiving pharmaceutical intervention, receiving surgery before chemotherapy maybe reduce treatment-related complications and improve survival. In that case, chemotherapy combined with surgery could be an optimal chooses.

In addition, we provided a little evidence to reveal the role of radiotherapy in PGDLBCL. In our study, all the 24 patients receiving radiotherapy during initial treatment had at least one of the following two situations: 1) existing residual lesion after chemotherapy ± surgery; 2) intolerance to chemotherapy. As a result, the inclusion of radiotherapy failed to show the improvement of survival. Besides using radiotherapy as salvage treatment, three cycles of CHOP followed by involved field radiotherapy was used effectively and well-tolerated in localized PGDLBCL patients.[25, 26] However, in Rituximab era, it remains unclear whether Rituximab can replace radiotherapy as a better choice for local-stage PGDLBCL. For local-stage patients, who achieved complete remission after four cycles of chemotherapy, consolidation radiotherapy could improve local control rate.[27] However, this regimen did not lead to any improvement in PFS and OS. Furthermore, Japanese researchers reported the correlation between PGDLBCL treated by radiotherapy ± chemotherapy and gastric adenocarcinoma.[28] Randomized controlled trial was strongly needed to evaluate the necessity and safety of radiotherapy in PGDLBCL.

Furthermore, immunotherapy has risen to the fifth main therapeutic modality for DLBCL, following chemotherapy, targeted therapy, surgery, and radiotherapy. Monoclonal antibodies targeting programmed death-1 (PD-1), programmed death-ligand 1 (PD-L1) and cytotoxic T-lymphocyte antigen-4 (CTLA-4) had been used alone or in combination with anti-CD20 antibody in a subset of DLBCL.[29] FDA had also approved two chimeric antigen receptor (CAR) T products for relapse and refractory B cell lymphoma. Future administration of immunotherapy regimens will be more dependent upon patients' biomarkers, rather than on histological types and subtypes.[30] As a special type of DLBCL, biomarkers unique to PGDLBCL should be actively explored, which may facilitate the discovery of safer and more effective therapeutics for this disease.

In summary, our results suggested that the combinations of chemotherapy and surgery, or chemotherapy and Rituximab, can raise the survival rate of PGDLBCL patients, compared to chemotherapy alone. However, the clinical outcome could not be further improved by adding either Rituximab or surgery to the two combinations. Rituximab showed clinical benefit in survival, especially in advanced-stage or high risk (IPI 3-5) patients. The inclusion of radiotherapy during initial treatment did not improve survival in our study. IPI and therapy regimens are independent predictors of outcomes. The future prospective trial is warranted.

Jun Zhu, Xinan Cen, and Haiyan Yang designed the research; Meng Wu and Jun Zhu wrote the article; and all authors provided study materials or patients and approved the article. We would like to thank Medpion (Beijing) Medical Technology Co., Ltd. for their help in data collection and statistical analysis.

2. Castillo JJ, Winer ES, Olszewski AJ. Sites of extranodal involvement are prognostic in patients with diffuse large B-cell lymphoma in the Rituximab era: an analysis of the Surveillance, Epidemiology and End Results database. Am J Hematol. 2014;89:310-4