Objective: The goal of this study was to characterize the disease-causing mutations in a Chinese family with congenital nuclear and posterior polar cataracts. Methods: Clinical data of patients in the family were recorded using slit-lamp photography and high definition video. Genomic DNA samples were extracted from the peripheral blood of the pedigree members and 100 healthy controls. Mutation screening was performed in the candidate genes by bi-directional sequencing of the amplified products. Results: The congenital cataract phenotype of the pedigree was identified by slit-lamp examinations and observation during surgery as nuclear and posterior polar cataracts. Through the sequencing of the candidate genes, a heterozygous c. 418C>T change was detected in the coding region of the γD-crystallin gene (CRYGD). As a result of this change, a highly conserved arginine residue was replaced by a stop codon (p. R140X). This change was discovered among all of the affected individuals with cataracts, but not among the unaffected family members or the 100 ethnically matched controls. Conclusions: This study identified a novel congenital nuclear and posterior polar cataract phenotype caused by the recurrent mutation p. R140X in CRYGD.

Cataracts can be defined as complete or partial lens opacification, either congenital or acquired. A congenital cataract is especially severe, as it potentially impairs visual development, and is one of the leading causes of childhood blindness. The prevalence of congenital cataracts is approximately 6.31/100,000 [1], 27-39% of which are believed to be inherited [2]. Autosomal dominant (AD) inheritance is commonly observed among hereditary cataracts, while autosomal recessive and X-linked patterns have also been reported [3].

To date, scientists have identified more than 35 loci, including over 20 genes which are associated with isolated congenital cataracts [4]. Among the congenital cataract causative mutations discovered thus far, approximately half of the mutations are in the crystallin family genes, and one quarter of them are in gap junction genes. Other mutations have been identified in heat shock transcription factor-4 (HSF4), aquaporin-0 (AQP0, MIP), v-maf avian musculoaponeurotic fibrosarcoma oncogene homolog (MAF), and beaded filament structural protein-2 (BFSP2), as well as other genes [5].

In this study, we investigated a three-generation family with congenital nuclear and posterior polar cataracts, and detected a R140X nonsense mutation in γD-crystallin, which cosegregated with the disease in this family.

The research protocols of this study adhered to the guidelines of the Declaration of Helsinki and were approved by the Medical Ethics Committees of the Second Affiliated Hospital, College of Medicine, Zhejiang University (Hangzhou, China). Appropriate informed consent from each participant was obtained.

A three-generation Chinese pedigree consisting of eleven individuals, including two affected individuals, formed the basis for this study. All eleven family members participated in the study (two affected and nine unaffected individuals; Figure 1). The proband (III:1) was a 1 year-old girl who visited our eye center in June of 2013 for a cataract extraction surgery. Her father (II:1), diagnosed with congenital cataracts 30 years previously (at birth), had his cataract extraction and intraocular lens implantation 16 years previously at our eye center as well. All of the patients and family members underwent ophthalmic examinations that included visual function, slit-lamp examination, intraocular pressure measurement, and fundus evaluation with dilated pupils. In addition, 100 unrelated healthy subjects were recruited as a control group.

Pedigree of Chinese family with congenital cataracts. The proband is marked with an arrow. Squares and circles indicate males and females, respectively. Black and white symbols represent affected and unaffected individuals, respectively.

We identified isolated bilateral congenital nuclear and posterior polar cataracts in the Chinese family, and the two patients showed the same clinical symptoms: lens opacification, horizontal nystagmus and amblyopia. Individual II:2 was diagnosed with congenital cataracts 30 years previously, at his birth, and had phacoemulsification and intraocular lens implantation 16 years previously. According to his medical records, his lens opacities were located mainly at the lens nuclei and posterior poles. Individual III:1 was diagnosed with congenital cataracts at the age of 3 months. Slit-lamp examination revealed that III:1 had nuclear and posterior polar opacities with posterior lenticonus. Individual III:1 underwent surgeries for both eyes at one year of age. According to our observation, during the surgeries, both eyes of individual III:1 had nuclear and posterior polar opacities, with a posterior capsular thinning or defect, which are secondary complications to the posterior lenticonus [8]. However, each eye had a different appearance. Her right nuclear opacities had been reabsorbed, which made the remnants drop into the vitreous body through the posterior capsular defect. Her left eye had intact nuclear cataracts and posterior lenticonus with round posterior capsular thinning (Figure 2). We performed irrigation-aspiration combined with anterior vitrectomy on the right eye, and standard phacoemulsification on the left (high-definition video can be provided upon request). The postoperative best-corrected visual acuity (BCVA) of affected member II:2 was 0.1/0.1 due to amblyopia, and he still exhibited severe horizontal nystagmus. Individual III:1's BCVA was unable to be measured since she was still preverbal; however, the postoperative visual stimuli could be fixed, centered and followed. Intraocular lenses will be implanted when she is two years of age.

Primers used in PCR of CRYGD. 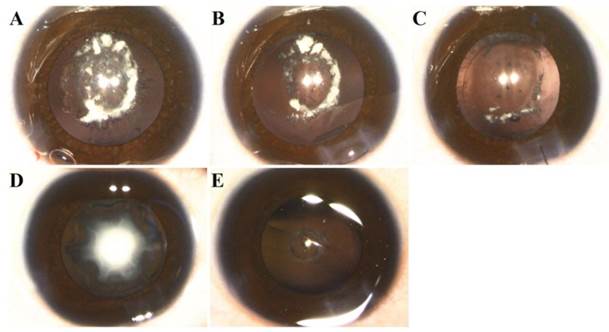 Mutation screenings were performed for all candidate genes, and a heterozygous change C>T at position 418 (c. 418C>T) was identified in exon 3 of the CRYGD gene (Figure 3). This mutation resulted in the substitution of a stop codon for a phylogenetically conserved arginine residue (p. R140X), and was only identified in the patients. It was not found in either the healthy family members or the 100 controls with same ethnic background. Moreover, this mutation was not present in either the 1000 Genomes Project database (http://browser.1000genomes.org/index.html) or the NHLBI Exome Variant Server (EVS, http://evs.gs.washington.edu/EVS/). With the exception of several nonpathogenic single nucleotide polymorphisms, no other mutations were detected.

The mutant protein is 35 amino acids shorter than the wild-type one, and the fourth Greek key motif (GKM) at the C-terminus was partially absent (Figure 4). The BEST/COREX generated a coarse-grained energy evaluation at the residue level by calculating the structural thermodynamic ensembles from native and mutant γD-crystallin (Table 2). Compared to the mutant, the native γD-crystallin has a positive delta G for unfolding, while the mutant favors the C-terminal domain in the unfolded state by a negative delta G [9]. Moreover, the stability constant at the per residue level showed that the C-terminal domain of the mutant protein favors the unfolded states (Figure 5).

Forward sequence analysis of the affected and unaffected individuals with congenital cataracts in this Chinese family, showing a heterozygous mutation (c. 418C>T) in exon 3 of CRYGD (black triangles). 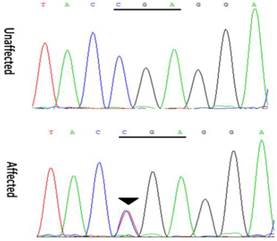 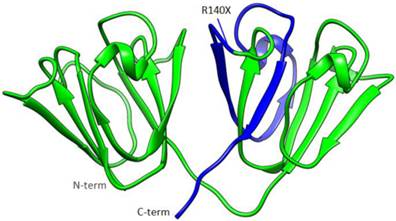 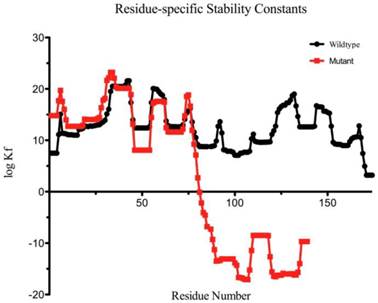 In this study, we report a nonsense mutation (c. 418C>T) in exon 3 of the CRYGD gene which caused congenital nuclear and posterior polar cataracts in a Chinese family. This mutation cosegregated with affected individuals, and was not detected in either the healthy family members or 100 ethnically matched controls.

Crystallins are structural proteins that play essential roles in lens development and the maintenance of transparency. Mammalian lens crystallins have a core set of three protein classes, the α-, β- and γ-crystallins, which are defined by the sizes of the oligomers that they form [10]. With the lowest molecular mass (20 kDa), the γ-crystallin family proteins are strictly monomeric [11]. The cDNA analyses show that most of the transcripts arising from this family among humans come from γC-crystallin and γD-crystallin, with the latter being the predominantly expressed species [12].

γD-crystallin is a member of the β/γ-crystallins super family, which shares the common feature of antiparallel β-sheets in the protein, called the ''Greek key motif'' [11]. In the γD-crystallin, the N-terminal and C-terminal halves of the sequence comprise two individual domains that each consist of two GKMs, which interact via the GKM2 and GKM4 [13]. Each GKM is composed of four antiparallel β-strands, and the R140X mutation in the present study is located in GKM4.

The transition of C>T at c. 418 in exon 3 of CRYGD is predicted to cause a premature stop codon, which leads to the deletion of the C-terminal residues 140-174. The overall γD-crystallin structure is depicted where the truncated portion from the R140X mutation is colored in blue (Figure 4).

As shown in the diagram, this deletion mutant loses its two β-strands of the fourth GKM, which destabilizes the C-terminal domain. Additionally, the missing residues may not only influence the folding of the domain, but also affect the aggregation state of the protein. A previous mutant investigation indicated that the R140X mutant exposed several buried residues to the surface, and displayed lower solubility and structural stability [14]. Venu Talla and co-workers reported that the loss of the C-terminal fragment in human γD-crystallin would lead to substantial intermolecular aggregates, which was expected to generate light-scattering particles, compromising the transparency of the cells and their assemblies [15]. The other two previously reported nonsense mutations in CRYGD, Y134X and W157X, also affected the fourth GKM and caused congenital cataracts.

Since γD-crystallin expression remains at a relatively high level in the human lens throughout one's lifetime, the CRYGD gene mutation has been associated with not only congenital cataracts, but also juvenile-onset cataracts. Mutations in the human CRYGD gene that cause childhood cataracts have been identified in more than 23 families thus far (Table 3) [16-37]. The R140X mutation was observed in our study as well as in another previously described family with congenital cataracts [35]. Our study indicates that the R140X is the actual causative mutation, and although the two studies revealed the same R140X amino acid alternation, the phenotypes were different. The previous study presented an exclusively nuclear congenital cataract family, and did not provide photographs of the affected individuals. Our study, however, suggests that the R140X mutation could present a novel nuclear and posterior polar cataract phenotype, and provides the photographic records of the patients.