Material and methods We conducted a retrospective analysis of 63 patients with tubal pregnancy who underwent SPLS and 71 patients who underwent conventional MPLS between January 2008 and December 2010. All patients in the SPLS group had a drainage tube placed through the umbilicus, and, in the MPLS group, through a 5-mm trocar site in one side of the lower abdomen.

Results No significance difference was discovered between the groups with regard to adjusted hemoglobin values (SPLS, 1.9 ± 1.0 g/dL versus MPLS, 1.7 ± 1.0 g/dL, P = 0.335). Additionally, there was also no significant difference in clinical characteristics, intraoperative findings, or operative outcomes.

Conclusions Our study demonstrated that transumbilical SPLS using conventional laparoscopic instruments has operative outcomes comparable to MPLS for the surgical treatment of tubal pregnancy. Transumbilical SPLS may therefore be offered as a feasible alternative to MPLS.

Ectopic pregnancy is the implantation of an embryo at an extrauterine site. The conventional treatment for tubal pregnancy involves surgical removal of the gestational sac. Classically, the surgical approach has been open laparotomy; however, a laparoscopic approach has been favored since the 1980s (1, 2). The Royal College of Obstetricians and Gynecologists Green-top Guidelines recommend laparoscopic surgery as the preferred approach (3).

The development of laparoscopic techniques has enabled surgeons to perform minimally invasive surgery, which aims to provide effective treatment of surgical diseases, while decreasing access-related morbidity and reducing the invasiveness of the procedure.

In the last several years, many gynecologic surgeons have attempted to improve cosmetic results and reduce postoperative hospital stays following laparoscopic surgery. Transumbilical single-port access laparoscopic surgery is carried out through a small incision in the umbilicus, resulting in a virtually invisible scar. That kind of single-port system made many gynecological surgeries feasible.

We reviewed medical records of 134 patients with tubal pregnancy, of whom 63 underwent SPLS and 71 underwent MPLS by the same medical team at our institution from January 2008 to December 2010. The study was approved by the Institutional Review Board of the Catholic University of Korea, Incheon St. Mary's Hospital. In all patients, a full history was obtained and physical examination was performed, including pelvic examination and pelvic ultrasonography. The initial diagnosis of tubal pregnancy was made through a combination of clinical examination, ß-hCG (human chorionic gonadotrophin) assay, and transvaginal ultrasonography.

We excluded patients who exhibited severe obesity (i.e., body mass index (BMI) > 35), those who were found to have fimbrial, cornual, or other non-tubal ectopic pregnancies intraoperatively, and those who were at high risk for general anesthesia. We also excluded patients who underwent salpingostomy, salpingotomy, or partial salpingectomy. All surgical procedures were performed by skilled laparoscopic surgeons with over ten years and more than one thousand cases of experience with conventional gynecologic laparoscopic operations.

The surgical procedure of conventional laparoscopic salpingectomy was performed as follows. Patients were administered general anesthesia through an endotracheal tube and placed in the lithotomy position. After sterile draping to provide adequate exposure of the pelvis, a uterine manipulator was inserted into the uterine cavity. A small vertical umbilical incision was performed for placement of the Veres needle. After the abdomen was insufflated with carbon dioxide to a maximum pressure of 12 mm Hg, a 10 mm trocar was inserted through the incised umbilicus to hold the optic camera. Subsequently, two 5 mm trocars were inserted into the left and right lower quadrants.

After removal of the collected blood and blood clot from the pelvic cavity and examination of the contralateral fallopian tube and other organs, total salpingectomy was performed by stepwise dissection of the mesosalpinx and fallopian tube with bipolar electrocautery forceps and monopolar scissors. The pelvic cavity was irrigated, and the specimen was extracted through the 10 mm umbilical trocar sleeve using the specimen retrieval bag. After inspecting the salpingectomy site for bleeding, a drainage tube was inserted through one of the lower abdominal 5-mm trocar sites.

A surgical glove and a small wound retractor (Alexis®, X-Small; Applied Medical Resources Corp., Rancho Santa Margarita, CA, USA) were adapted for use in the single-port system. After a single 1.5- to 2.0-cm vertical umbilical incision, a rectus fasciotomy was made, and the peritoneal cavity was identified. The wound retractor was then introduced through the umbilical incision for use as a fascial retractor. Next, the single-port apparatus, made up of a surgical glove with three cannulas attached, was fixed to the outer ring of the wound retractor (Fig. 1A).

The cannula used were of different sizes: two were 5 mm in diameter, and the other was either 10 or 12 mm in diameter, depending on the diameter of the instrument shafts (10 or 12 mm). After installation of the single-port system into the umbilical incision, the abdomen was insufflated with carbon dioxide to a maximum pressure of 12 mm Hg.

(A) External view of the single-port system using a wound retractor and a surgical glove. (B) The affected fallopian tube (arrow) was grasped by conventional laparoscopic instruments.

Removal of the specimen. The specimen was extracted into a fingertip of a surgical glove. Arrows indicate the removed specimens. 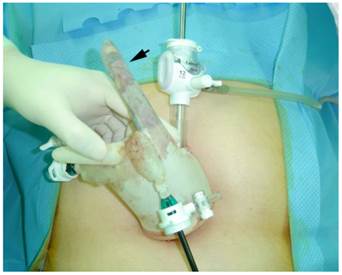 We conducted an comparative analysis between the two groups based on several factors, namely, duration of amenorrhea, previous abdominal surgery, operating time, change in hemoglobin level between preoperative phase and postoperative day 1, number of patients requiring blood transfusion, amount of blood transfused per patient, perioperative complications, incidence of conversion to laparotomy, and duration of hospital stay.

Fever was defined as a postoperative body temperature of > 38°C. We measured the duration of operation from the first skin incision to the last suture of skin closure.

All data were analyzed using the chi-square test for categorical variables and Student's t-test for continuous variables. P-values < 0.05 were considered statistically significant.

The clinical characteristics of the patients and a comparison between the groups are given in Table 1. The mean ages of the patients were 31.2 ± 5.2 years (SPLS) and 30.4 ± 5.0 years (MPLS). Both groups were similar with respect to mean age, BMI, number of nulliparous patients, and previous history of abdominal surgery. The mean gestation times at presentation for the SPLS and MPLS groups were 53.3 ± 11.5 and 50.4 ± 10.3 days, respectively, and there was no statistically significant difference between the two groups.

The intraoperative findings of the SPLS and MPLS group are presented in Table 2. In most cases, tubal pregnancy was detected in a ruptured state and was located in the ampullar portion of the uterus. When both groups were compared, there was no significant difference regarding the state of fallopian tube or the location or size of the tubal pregnancy.

a Values are given as number (percentage), mean ± SD. n, numbers.

The clinical outcomes of both groups are shown in Table 3. There was no significant difference in the changes in hemoglobin values between the groups. When a transfusion was performed between the preoperative phase and postoperative day 1, the hemoglobin value was adjusted and the resulting value was used in the comparison of adjusted hemoglobin values between the groups. There was no significance difference between groups in adjusted hemoglobin value (SPLS, 1.9 ± 1.0 g/dL versus MPLS, 1.7 ± 1.0 g/dL, P = 0.335). Although not detailed in Table 3, no significant differences were observed in procedure-related rates of bleeding or status of peritoneal blood collection between the two groups. Furthermore, there were no cases of bleeding or blood transfusion secondary to procedure-associated complications, such as trocar-related vessel injury.

Similarly, no significant differences were observed between the two groups in regards to the duration of operation, the number of patients requiring blood transfusion or the amount of blood transfused per patient, the incidence of bowel injury, rates of postoperative fever, the number of wound infection, and the duration of hospital stay. No complications, including wound-related problems, were observed at postoperative follow-up (Fig. 4). 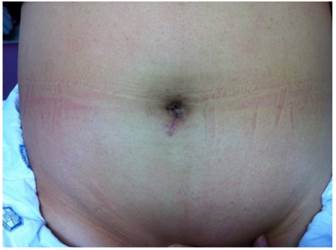 More than 95% of ectopic pregnancies occur at the fallopian tube. The reported incidence is approximately 8-10 per 1000 maternities (4). Ectopic pregnancy remains a serious cause of maternal morbidity and mortality (5). Dubboisson et al. have advocated laparoscopic salpingectomy as the procedure of choice for tubal ectopic pregnancy (6). Salpingectomy is simple and effective as it avoids the risk of persistent ectopic pregnancy and obviates the need for postoperative β-hCG monitoring.

Initially, laparoscopic surgery required a longer intraoperative time than traditional open approaches, but as surgeons have gained experience, the necessary operative time has become comparable to that of laparotomy. Laparoscopy is not only suitable for early ectopic pregnancy, but it is also safe and efficacious in instances where there is tubal rupture and hemoperitoneum, provided that the patient is not hemodynamically unstable (7-9). Additionally, the evolution of both laparoscopic surgical techniques and surgical instruments has allowed a reduction in the size and number of visible postsurgical scars.

The single-port system described previously has several functions and advantages. Single-port laparoscopic surgery requires few specialized instruments, unlike NOTES, and it can easily be converted to a multi-port access procedure if necessary. The wound retractor widens the umbilical incision site and makes possible the simultaneous transit of conventional laparoscopic instruments through a small umbilical incision only 1.5 to 2.0 cm in size.

Although trocar-related injury is uncommon, it is enough of a problem that various methods of prevention and treatment are still being investigated (10, 11). When ancillary ports are inserted, it increases the risk of injury to the inferior epigastric vessels (12). In contrast, access through the umbilicus as a single pathway minimizes injury to the abdominal wall and eliminates the risk of injury to abdominal wall vessels (e.g., the inferior epigastric vessels) during insertion of the trocars. In addition, because fewer trocars are inserted, the risk of injury to visceral organs (e.g., bladder, mesentery, and bowel) is also reduced.

Although there were no differences in total operating time, the time of operation could be reduced by using the fingertip of the surgical glove to collect the specimen compared with manipulating and handling the retrieval bag during the operation. Moreover, our method reduced the costs associated with retrieval bags. We have also used this method for the extraction of other benign, uninfected gynecologic masses such as ovarian cysts and small myomas.

This study is inherently limited in its design as a retrospective study. We were also limited by using inclusion criteria that were restricted to cases of tubal pregnancy and the operation method of total salpingectomy. Since patients requiring other types of surgery for ectopic pregnancy are relatively rare, future studies with longer study periods are needed for a more viable comparison.

In conclusion, our study demonstrates that there were no significant differences in operating time or complication rates between SPLS and MPLS. In addition, the technique offers a nearly scar-free surgery and reduces incision-related morbidity. Although single-port access laparoscopic surgery has limitations and requires additional time and effort on the part of surgeons to acquire the requisite skills, SPLS can be an effective alternative to MPLS with the addition of improved equipment and operator training.

The authors have no potential conflicts of interest or financial ties to disclose.