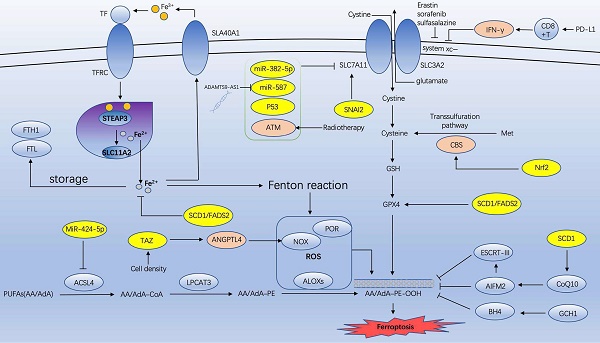 Ovarian cancer (OC) is the primary cause of mortality from female reproductive cancers around the world [1]. Moreover, because ovarian cancer is frequently diagnosed at an advanced stage, it presents a significant clinical challenge [2]. Although overall survival at all stages of ovarian cancer has improved with advances in surgery, chemotherapy, and new immunotherapies, the 5-year overall survival rate for these patients remains at about 30% [3]. Additionally, reliable biomarkers and therapeutic targets for the diagnosis of ovarian cancer are still lacking.

Ferroptosis is a recently identified form of regulated cell death driven by the iron-caused accumulation of lipid peroxide, and distinct from autophagy, apoptosis, and necrosis in morphology, biochemistry [4]. Recent evidence demonstrates that ferroptosis modulates tumor genesis, development, and metastasis; thus, targeting ferroptosis may be a viable method for the treatment of ovarian cancer [5]. In addition, several studies have revealed that ferroptosis has synergistic effects with chemotherapy, radiotherapy, and immunotherapy in inhibiting the growth of ovarian cancer cells. Chemotherapy is one of the standard treatments for ovarian cancer, which can effectively reduce the number of cancer cells and improve the prognosis of patients. However, some patients present with drug resistance or produce many side effects after treatment. At present, many studies have found that ferroptosis can synergize with chemotherapy to enhance the anticancer effect [6]. Radiotherapy is a useful strategy for recurrent or refractory ovarian cancer. At present, many studies have found that ferroptosis can synergize with radiotherapy to enhance the anticancer effect [7]. Immunotherapy's effectiveness in treating cancer has been widely recognized. However, immunotherapy is restricted since only one-third of ovarian cancer patients react to these agents. Recently, more than one kind of cell death mechanism has been shown to communicate with antitumor immunity. Wang et al. [8] found that the combination of ferroptosis induction and immunotherapy increased anticancer efficacy synergistically. Mechanistically, CD8+ T cells stimulated by immunotherapy induce ferroptosis in tumor cells. Ferroptotic cancer cells release high-mobility group box-1 (HMGB1) in an autophagy-dependent manner [9]. As a significant damage-associated molecular pattern (DAMP), HMGB1 is an essential protein for the immunogenic cell death (ICD) of cancer cells [10]. Ferroptotic cancer cells may trigger potent immune responses and enhance antitumor immunity through ICD. Therefore, ferroptosis plays an important role in the treatment of ovarian cancer. Further understanding of the related mechanism and clarifying the target of action are expected to provide a new method for the treatment of ovarian cancer.

In this review, we summarize the features of ferroptosis based on its underlying basis and function in ovarian cancer, as well as its potential applications in the treatment of ovarian cancer. Consequently, targeting ferroptosis might be a novel and promising method for eliminating ovarian cancer.

The characteristics of ferroptosis

The Mechanism of Ferroptosis

Iron is usually found as ferrous (Fe2+) and ferric (Fe3+). Food iron primarily exists as Fe3+, which is insoluble and needs to be converted to Fe2+ for absorption. Fe3+ binds to transferrin (TF) in the serum and then is subsequently identified by the transferrin receptor (TFRC) in the cell membrane, which facilitates Fe3+ entrance into the endosome. The STEAP3 metalloreductase is an endosomal enzyme that reduces Fe3+ to Fe2+. Finally, Fe2+ is released from the endosomes to the cytosol and stored in the labile iron pool by solute carrier family 11 member 2 (SLC11A2/DMT1). Excess Fe2+ can be stored in the iron-storage protein ferritin, including ferritin light chain (FTL) and ferritin heavy chain 1 (FTH1), or excreted from the cell via the solute carrier family 40 member 1 (SLC40A1/ferroportin1/FPN) [13]. In addition, excess iron can activate iron-containing enzymes (such as lipoxygenase) and produce reactive oxygen species (ROS) via the Fenton reaction, thereby promoting lipid peroxidation and ferroptosis [14]. Therefore, intracellular iron plays a crucial role in the maintenance of cellular homeostasis.

System Xc- is an amino acid antiporter formed by the functional subunit SLC7A11 and the regulatory subunit SLC3A2. It is an essential antioxidant system in cells and maintains the production of glutathione (GSH) by exchanging extracellular cystine with intracellular glutamate [4]. Some small molecule compounds or drugs (such as erastin, sorafenib, and glutamate) can inhibit SLC7A11, leading to GSH depletion and triggering ferroptosis [19]. In addition, some cells can promote the synthesis of GSH through the transsulfuration pathway (a pathway that bypasses the system Xc- and produces cysteine via methionine). Consequently, system Xc- inhibitors could not cause ferroptosis in these cells [20].

GSH is a necessary cofactor of the glutathione peroxidase 4(GPX4) antioxidant response and can cycle between oxidized (GSSG) and reduced (GSH) forms, allowing it to engage in redox biochemical reactions [21]. Consequently, the targeted regulation of GSH is an essential mechanism of ferroptosis.

GPX4 can eliminate phospholipid peroxides and exerts a critical role in preventing the accumulation of ROS and maintaining lipid homeostasis, ultimately blocking ferroptosis [4]. Consequently, the targeted regulation of GPX4 is an essential mechanism of ferroptosis.

MiRNA is a non-coding RNA that plays a crucial role in posttranscriptional gene regulation [26]. Emerging evidence indicates that alternations in miRNAs are identified to be related to various human cancers and regulation of miRNAs can render cancer cells vulnerable to ferroptosis [27].

Hippo is an evolutionarily conserved pathway that can sense and regulate the density-dependent phenotypes of cancer cells. It converges into two transcriptional co-activators, YAP (Yes-associated protein 1) and TAZ (transcriptional coactivator with PDZ-binding motif) [35]. Yang et al. [36] found that cell density in ovarian cancer cells controls how sensitive they are to ferroptosis. They then looked into how YAP and TAZ affect ferroptosis in ovarian cancer cells.

SCD1 is a rate-limiting enzyme that catalyzes the conversion of saturated fatty acids (SFAs) to monounsaturated fatty acids (MUFAs) and that is upregulated in numerous malignancies, including prostate, liver, and breast cancer [39]. It has been shown that lipid metabolism is a crucial mediator of ferroptosis. Specifically, to trigger ferroptosis, increased amounts of phosphatidylethanolamine (PE) containing oxidized PUFAs are required [16]. Given how important lipid peroxidation is to ferroptosis, regulating the lipid composition of cells is likely to perturb ferroptosis.

Xuan et al [42] reported a novel cellular antioxidant system that SCD1/FADS2 could regulate GPX4 and the GSH/GSSG ratio to prevent excess ROS-mediated oxidative stress and ferroptosis. SCD1/FADS2 are the key iron-containing enzymes whose enzymatic activities are executed by binding to iron[43]. When SCD1/FADS2 is inhibited, its iron-binding capacity declines, leading to an accumulation of cellular iron. Experiments also revealed that inhibition of SCD1/FADS2 activities led to an increase in Fe2+ levels, which in turn resulted in ROS buildup and lipid peroxidation [42].

Kato et al. found [44] that MI-463(a Menin‑mixed‑lineage leukemia inhibitor) induces ovarian cancer cell line death through the induction of ferroptosis, which may be due at least in part to the inhibition of SCD1 activity. Liu et al [40] reported that Agrimonolide (the main bioactive polyphenol isolated from Agrimonia pilosa Ledeb) inhibits cancer progression and induces apoptosis and ferroptosis by targeting inhibition of SCD1 in A2780 and SKOV-3 ovarian cancer cell lines.

SNAI2 plays a multifunctional role in cancer progression, including the induction of tumorigenesis, invasion, and metastasis [49]. Previous studies have found that SNAI2 is activated in ovarian cancer cells and has the potential to promote lymphovascular diffusion [50]. However, the potential mechanism between ferroptosis and SNAI2 in ovarian cancer remains unclear.

Overexpression of Nrf2 has been linked to decreased response to anticancer treatments and a worse prognosis for patients [52]. Recently, Nrf2 has been shown to be an antioxidant transcription factor that protects tumor cells against ferroptosis [53]. However, further research is required to determine whether ferroptosis is involved in Nrf2-induced resistance to anticancer therapies and a worse prognosis.

When it comes to female gynecological cancers, ovarian cancer is by far the most lethal. Although chemotherapy can effectively reduce the number of cancer cells, residual tumors still persist [57]. Importantly, residual tumors are accompanied by decreased apoptotic response, enhanced antioxidant defence, and enhanced efflux mechanisms, which result in the development of drug resistance [58, 59]. Due to the shortcomings of chemotherapy, other regulatory death pathways, such as ferroptosis, have been investigated to improve cancer treatments. It has been shown that ferroptosis plays a crucial role in the chemotherapy of ovarian cancer and enhances the anticancer impact of cisplatin in the treatment of ovarian cancer.

Multidrug resistance (MDR) is connected with overexpression of drug efflux transport ATP-binding cassette subfamily B member 1 (ABCB1) in cancer cells [61]. In the study of ovarian cancer, Zhou et al. [62] found that erastin can overcome docetaxel resistance and enhance docetaxel's antitumor efficacy by inhibiting ABCB1. Whether ferroptosis is involved in erastin's enhancement of docetaxel's efficacy in ovarian cancer remains to be determined.

Previous research has demonstrated that glycolysis is up-regulated in numerous types of tumor cells while oxidative phosphorylation (OXPHOS) is down-regulated (OXPHOS) [63]. Gentric et al. [64] found that high-OXPHOS metabolism can enhance the sensitivity of chemotherapy for ovarian cancer and improve the prognosis of patients by upregulating PML expression and reducing PGC-1 transcriptional activity to promote oxidative stress (including increased ROS and lipid peroxidation). Increased ROS content and lipid peroxidation are characteristics of ferroptosis [4]. Ferroptosis may be involved in the enhanced sensitivity of chemotherapy by high-OXPHOS. Therefore, targeting high-OXPHOS and promoting ferroptosis may be a promising anti-tumor strategy.

T cells, a crucial component of the adaptive immune system, can selectively eliminate pathogens and tumor cells and play an important role in cancer immunotherapy [69]. Immunotherapy can boost anticancer effects by restoring and enhancing CD8+ T cell activity [70]. Previous studies have revealed that immunotherapy can promote ferroptosis in ovarian cancer cells. Wang et al. [8] found that immunotherapy-activated CD8+ T cells can enhance the antitumor efficacy of immunotherapy by inducing ferroptosis in ovarian cancer cells. Mechanistically, activated CD8+ T cells could release interferon-gamma (IFN-γ), which inhibited cystine uptake by downregulating the expression of system Xc-, as a result, promoting lipid peroxidation accumulation and ferroptosis in ovarian cancer cells. Cyst(e)inase is an engineered synthetic therapeutic enzyme that can induce ferroptosis by degrading cysteine and cysteine [71, 72]. Wang et al. [8] show that Cyst(e)inase in combination with PD-L1 blockade (an immune checkpoint inhibitor agent) can effectively inhibit the growth of the ID8 ovarian cancer cell line. This combination of drugs promotes lipid peroxidation and ferroptosis to a greater degree than Cyst(e)inase or PD-L1 blocker treatment alone. This might be a way to overcome immunotherapy resistance. In addition, Jiang et al. [73] found that Fe3O4-SAS@PLT (a biomimetic magnetic nanoparticle) can induce ferroptosis in the metastatic tumor, which significantly enhanced the immune efficacy of PD-1 inhibitors. Therefore, immunotherapy-induced ferroptosis in tumor cells is a unique anticancer mechanism that is anticipated to become a new form of cancer treatment.

Ferroptosis is a novel kind of regulated cell death distinct from autophagy, apoptosis, and necrosis. The precise mechanism of ferroptosis is still unknown. In its research, accumulating evidence shows that it involves many signal pathways and is closely related to the genesis, development, and metastasis of tumors. Its importance in tumor treatment has attracted extensive attention.

Presently, an increasing number of studies have demonstrated that ferroptosis can inhibit the progression of ovarian cancer cells, and ferroptosis in combination with chemotherapy, radiotherapy, and immunotherapy can enhance the tumor-inhibiting effect. In the future, targeting ferroptosis may become a novel treatment for ovarian cancer.

The mechanism of ferroptosis in various ovarian cancer cell lines. 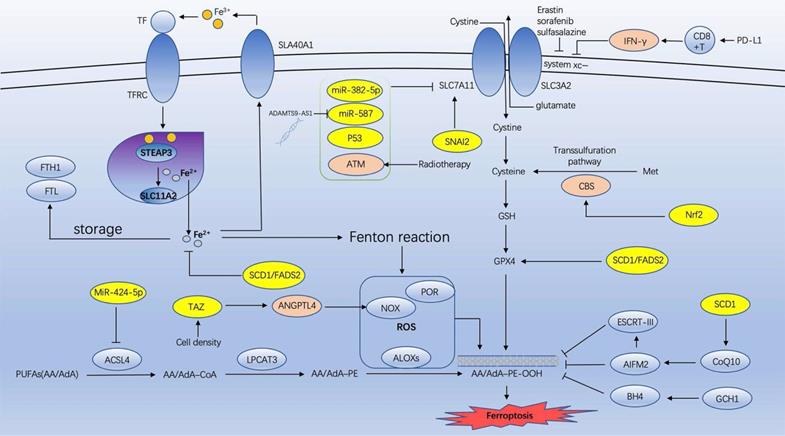 The authors declare that no funds, grants, or other support were received during the preparation of this manuscript.