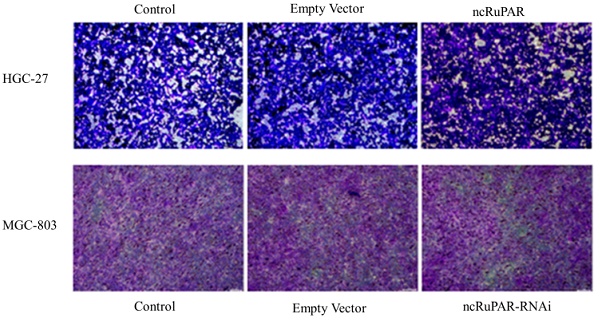 Results: ncRuPAR inhibited human gastric cancer cell proliferation and induced G1/S phase arrest and apoptosis, but did not affect migration or invasion in vitro. Overexpression of ncRuPAR in vitro was found to inhibit its known target PAR-1, as well as PI3K/Akt signaling. The downstream targets of PI3K/Akt, cyclin D1 was downregulated, but there was no change in expression level of B-cell lymphoma 2 (Bcl-2).

Gastric cancer is prevalent worldwide and has a higher incidence in males than females [1]. Although there is no lack of treatment options including a combination of surgery, chemotherapy, radiotherapy, immunotherapy and/or adjuvant therapy [2], treatment efficacy and patient survival rates depend on tumor staging, occurrence of metastasis, drug resistance and tumor recurrence [1-3]. Disease prognosis has vastly improved with a better understanding of disease etiology and advancements in early diagnostics and treatment methods [1,4]. The risk of gastric cancer can be reduced by effective prevention measures against Helicobacter pylori infection, and adopting a healthy diet and lifestyle [1]. However, due to inherent tumor heterogeneity and late diagnoses, gastric cancer remains one of the top causes of cancer-related deaths globally [5,6]. Deeper insight into the mechanisms underlying its pathogenesis could facilitate early diagnosis and development of improved interventions.

Long non-coding RNAs (lncRNA) of more than 200 nucleotides in length have well-reported roles in regulating the tumorigenesis and progression of many cancers, including gastric cancer [7,8]. In addition, they can modulate drug resistance and have been proposed as potential prognostic markers and therapeutic targets [7-11]. The lncRNA ncRuPAR (non-protein coding RNA, upstream of coagulation factor II thrombin receptor [F2R]/protease-activated receptor-1 [PAR-1]) located on chromosome 5 has been shown to regulate gastric cancer malignancy, wherein its downregulation can promote angiogenesis, invasion, metastasis and progression [7,12]. The high levels of the G-protein coupled receptor PAR-1, but low levels of ncRuPAR, observed in gastric cancer suggests the inhibition of PAR-1 by ncRuPAR12. Suppression of ncRuPAR expression has also been shown to contribute to hepatocellular carcinoma pathogenesis and progression. Given that the molecular mechanism of ncRuPAR is poorly characterized, this study was conducted to elucidate its regulatory effects in gastric cancer.

A cell monolayer in the logarithmic growth phase was digested with 0.25% trypsin and sorted into individual cells in RPMI 1640 medium containing 10% FBS. The cell suspension (200 cells/well) was then inoculated into 12-well plates and gently rotated to ensure uniform spreading of the cells. The cells were cultured at 37 ºC, with 5% CO2 and 100% saturated air for two weeks. Upon the appearance of colonies, the culture was halted. The supernatant was discarded, and the cells were washed twice with phosphate buffered saline (PBS). The colonies were fixed in 5 mL pure methanol or 1:3 acetic acid for 15 min before staining with Giemsa solution for 10 min. Giemsa solution was then slowly rinsed off with running water and colonies were left to air-dry. Colonies were counted under a microscope (Olympus, Japan) at a low magnification (4x). Only colonies larger than 10 cells were counted. Triplicates were performed.

Flow cytometry was performed to determine the effect of ncRuPAR on apoptosis and the cell cycle of human gastric cancer HGC-27 and MGC-803 cell lines. Cells (1×105 cells/well) were seeded in six-well plates with annexin-binding buffer and were double-stained using 5 µL annexin V-FITC and 1 µL propidium iodide (PI) (BD Biosciences, USA). Next, flow cytometric analysis was performed (FACS Calibur, BD Biosciences) to detect apoptotic cells. For cell cycle analysis, cells were fixed with 70% ethanol overnight and stained with PI (0.1 mg/mL) in the presence of ribonuclease A (Takara) for 30 min at room temperature. The cell cycle distribution was examined by flow cytometry, and results were analyzed using FlowJo software (Tree Star Corp., USA).

Scratch assay was performed to assess cell migration. HGC-27 and MGC-803 cell lines were inoculated into a six-well plate (1×105 cells/well) and cultured at 37 ºC under 5% CO2 overnight. A straight line was draw on the bottom of the six-well plate using a marker and a ruler. When cell concentration reached 100%, a 10 µL pipette tip was used to scratch horizontal lines into the cell monolayers (perpendicular to the line drawn on the bottom). Cells were carefully rinsed with PBS for three times to remove dislodged cells, and then serum-free medium was added to the well. Cell culture was continued at 37 ºC under 5% CO2 and the cells were continuously monitored. Images were captured after 72 h using an inverted microscope (Olympus, Japan).

Matrigel transwell assay was performed to assess the effect of ncRuPAR on human gastric cancer cell invasion. Serum-free culture media was added to the upper chambers and culture media containing 600 μg fibronectin and 10% FBS was added to the lower chambers of a 24-well Transwell plate (Corning, USA). HGC-27 and MGC-803 cell suspensions (4×105 cells/mL; 150 μg/well) in RPMI-1640 medium were inoculated in the upper chambers after removal of the serum-free culture media. After 24 hours, the chambers were removed. The non-invasive cells in the upper chamber were gently removed with a cotton swab, and the chamber was rinsed several times with PBS. The membrane was fixed with 95% ethanol for 10 min and then stained with crystal violet for 20 min to stain the cells that had invaded. Images of each chamber, with three random visual fields of view, were captured using an inverted microscope. Triplicates were performed.

Total RNA was extracted from HGC-27-ncRuPAR and HGC-27-empty vector human gastric cancer cell lines with TRIzol reagent for microarray analysis using an Affymetrix GeneChip and Gene Array Scanner (Thermo Fisher Scientific, USA). Supplementary material 1 shows a flowchart for microarray data processing and analysis. Data analysis was performed using IPA (Ingenuity Pathway Analysis) software. Genes with fold change absolute values >1.5 and FDR < 0.05 were deemed to be differentially expressed. Hierarchical clustering of differentially expressed genes was presented in a heatmap. These differentially expressed genes were then further analyzed by IPA analysis to identify the possible target genes and signaling pathways of ncRuPAR that may regulate human gastric cancer cell proliferation and apoptosis. The microarray results were uploaded into Qiagen's IPA system and were compared with the ingenuity pathway knowledge base. The differentially expressed genes were categorized according to their respective canonical pathways, diseases and functions, and gene interaction networks. The signaling pathways underwent retrograde sorting by -log(P-value), with more significantly enriched pathways having lower P values. The z scores, which indicate the degree of pathway activation or inhibition, were calculated. Scores of z > 2 indicate pathway activation while z < -2 indicate pathway inhibition. The ratio of the number of differentially expressed genes with respect to the total number of genes in a particular signaling pathway was also calculated. 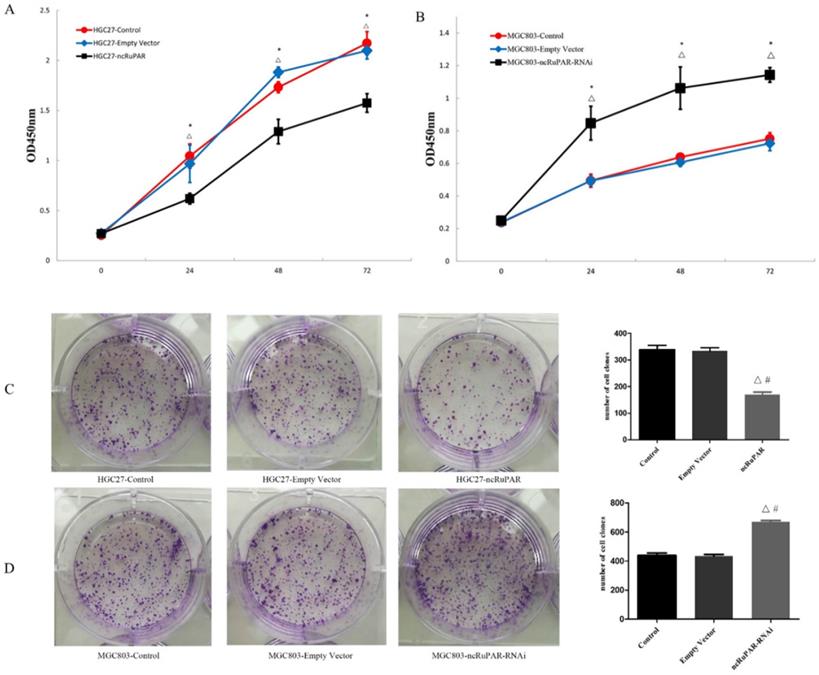 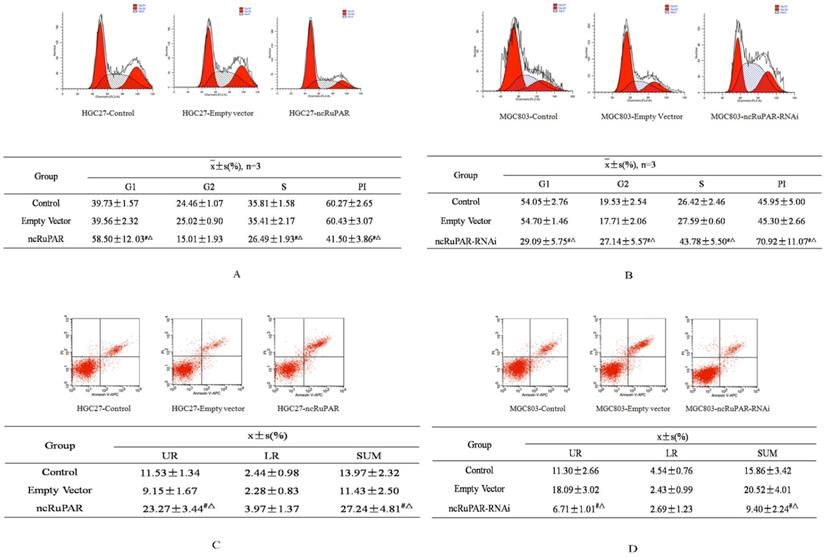 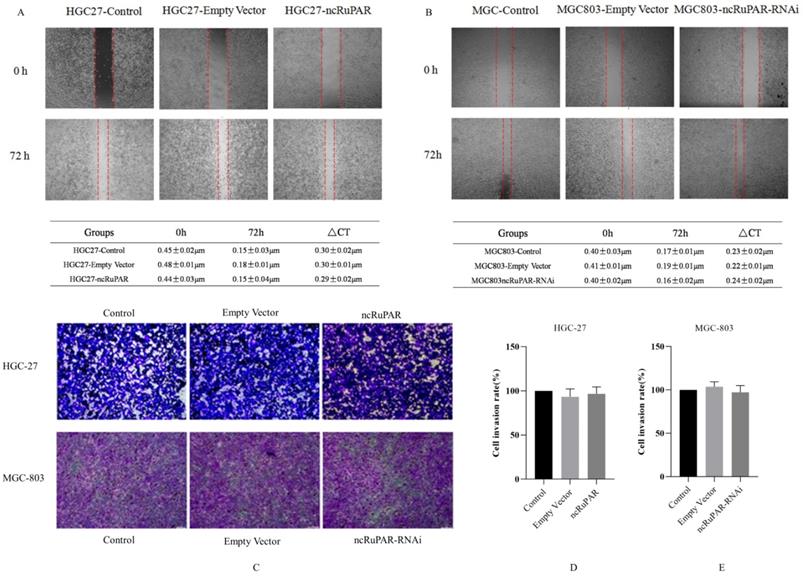 The fold-change values from both microarray and qPCR validation 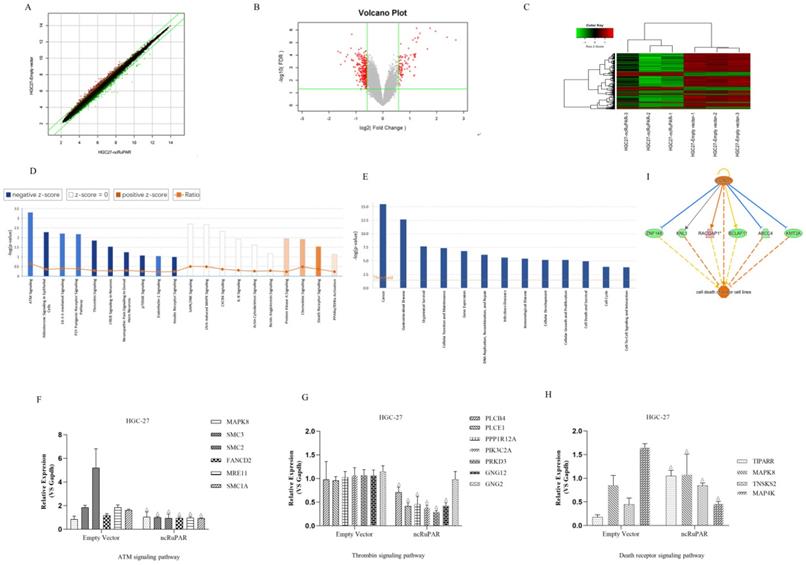 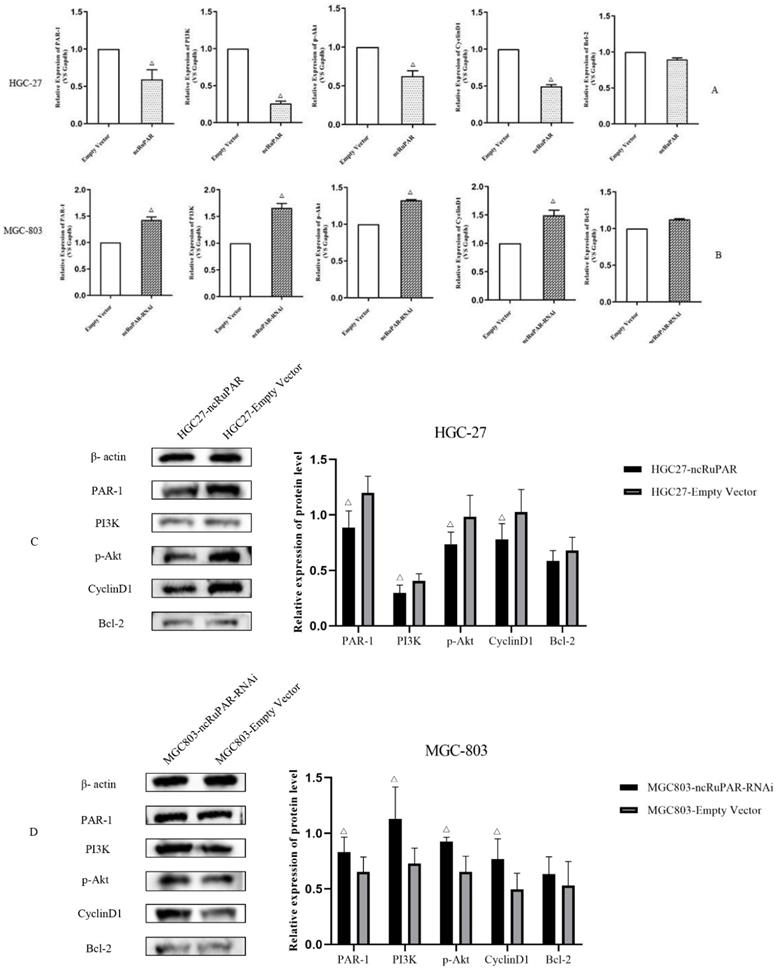 PAR-1 is a seven-transmembrane G-protein coupled receptor protein that can activate the PI3K/Akt signaling pathway [13,14,16]. PAR-1 inhibition was found to inhibit cell death via PI3K/Akt pathway activation [14,15]. In addition, both PAR-1 and PI3K/Akt signaling have been implicated in tumorigenesis in triple negative breast cancer17and pancreatic cancer [18]. Thus, their potential roles in regulating human gastric cancer cell proliferation and apoptosis were examined in this study. Given the previously reported regulation of PAR-1 protein by the lncRNA ncRuPAR during embryonic development [30], it was speculated that they may be similarly associated in gastric cancer. Consistent with a prior study [12], an inverse correlation between ncRuPAR and PAR-1 expression was noted in human gastric cancer by qPCR and western blotting in the current study. Moreover, upregulation of ncRuPAR was also found to inhibit PI3K/Akt signaling, as evidenced by the reduced levels of PI3K and p-Akt from western blotting.

The microarray data can be accessed from GEO (Gene Expression Omnibus) database with accession number GSE211598.