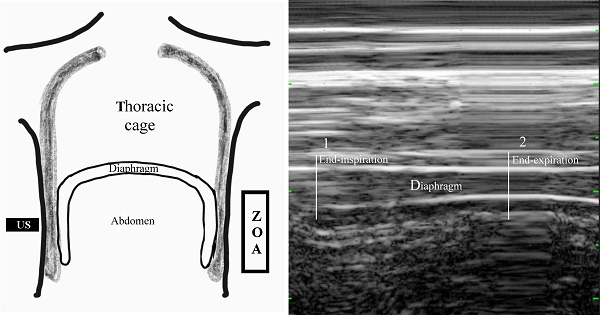 Background: Diaphragm movement is well correlated with inspired volume of the lung. Dexmedetomidine (DEX) has less effect on respiratory functions than other sedatives. The objective of this study was to investigate diaphragmatic movement using ultrasound (US) during DEX infusion for sedation in spontaneously breathing patients undergoing unilateral upper limb surgery.

Results: TEI and TEE showed no significant changes during the study period (P = 0.394 and P = 0.205, respectively). DTF was maintained at both T0 and T1 (P = 1.000). At recovery after DEX infusion discontinued, DTF was increased by 3.85%, although such increase was not statistically significant (T0 vs. T2, P = 0.525). SpO2 remained above 99% and EtCO2 remained below 36 mmHg. Desaturation episodes were not observed during the study period.

Conclusions: Results of this study showed that DEX sedation did not affect the diaphragmatic movement in situation of decreased RR induced by DEX. This finding implies that DEX-induced sedation does not result in clinically significant respiratory depression.

Several tools for assessing diaphragmatic movement are available, including radiology and electromyography. Transitional plain radiography is relatively insensitive due to wide normal variability of diaphragm position. Fluoroscopy also has limitation to quantitate, including paradoxical movement on sniffing. In addition, fluoroscopy has a risk to exposures to significant radiation like computed tomography. Transportation is also needed for taking the patient to the room equipped for applying radiology. Magnetic resonance imaging also needs to transport the patient to the room equipped. It also has a high cost. Electromyography as a non-imaging test is technically challenging to perform including the risk of pneumothorax [3]. Magnetic phrenic stimulation is considered as an evoked maneuver. It has an advantage as a reference method. However, it is only available in expert centers that can afford to use recent techniques [4, 5]. On the other hand, neuromuscular ultrasound (US) is a simple, portable, non-invasive technique without any radiation risk to evaluate diaphragmatic structure and activity. It was first introduced by Cohen et al. [6] in 1969. It has advanced recently to allow high resolution images. US has been shown to have an accuracy similar to most other imaging modalities for assessing diaphragmatic activity [3, 7, 8].

Sedation for procedures is a rising demand both inside and outside the operating room. This in turn has led to concern over potential life-threatening complications such as respiratory depression caused by sedatives [9]. Dexmedetomidine (DEX) as an α2-adeonoceptor agonist is an alternative drug of choice for sedation to achieve effective sedation while avoiding respiratory complications. In addition, DEX has stable hemodynamics by vagomimetic actions of peripheral postsynaptic α2b-receptors in the vascular smooth cells of resistant vessels [10]. However, studies evaluating the effect of DEX on the diaphragmatic activity especially using US as a non-invasive assessment method are lacking, although effects of some other sedatives on diaphragmatic activity have been evaluated [11-13].

In this respect, the aim of this observational prospective study was to investigate the effect of DEX on respiratory muscles, especially hemi-diaphragmatic activity, by US in spontaneously breathing patients under deep DEX sedation undergoing elective upper limb surgery with ipsilateral axillary brachial plexus nerve block.

This study was approved by the Institutional Review Board (IRB) of our institution (PC19OISI0134). All enrolled patients provided written informed consent. A total of 34 consecutive patients between May 2020 and October 2021 were enrolled in this study. All patients underwent unilateral elective limb surgery with ipsilateral axillary brachial nerve plexus block under deep dexmedetomidine sedation. Inclusive criteria were American Society of Anesthesiologists physical status classification (ASA) grades I and II, age ≥ 19 yrs, and normal cardiac and pulmonary function. Exclusion criteria were: neurologic or muscular diseases including peripheral neuropathy and central nervous system disorders, receiving anticholinergic drugs, diaphragm palsy on chest X-rays, and lack of informed consent.

The block was performed at ipsilateral axillary brachial nerve plexus using US. The patient's limb of ipsilateral side for surgery was abducted to 90 degrees, with the elbow flexed to 90 degrees. An 8 to 14 MHz linear transducer was placed in a transverse plane at the lateral border of the pectoralis major muscle and the pulsating axillary artery was visualized. A 22-gauge needle (UniPlex®NanoLine®, PAJUNK® Holding GmBH, Geisingen, Germany) was used to administer local anesthetic to axillary nerves including radial, median, ulnar, and mulsculocutaneous nerves surrounding the axillary artery. For local anesthetic, a total 35 ml of 0.5 % ropivacaine hydrochloride (Naropin 0.75%, Mitsubishi Tanabe Pharma Co., Osaka, Japan) was used to perform axillary brachial plexus block. An axillary brachial plexus block was performed on the patient's left side for ipsilateral upper limb surgery.

Sedation was provided using intravenously continuous infusion of DEX (dexmedetomidine hydrochloride 200mcg/50ml, Precedex premix injection, Pfizer, NY, USA) along with a loading dose by anesthesiologist under guidance of the Oberver's Assessment of Alertness/Sedation (OAA/S) scale and bispectral index (BIS) [14]. DEX was administered at 1mcg/kg for 10 mins as a loading dose, followed by continuous infusion of DEX at a dose of 0.3 to 0.8 mcg/kg/hr to maintain level 1 according to the OAA/S scale.

Supplementary oxygen was applied at a rate of 5 L/min via a simple mask. Peripheral oxygen saturation (SpO2), end tidal CO2 (EtCO2), and respiratory rate (RR) were monitored. All hypoventilation episodes were recorded. Ultrasonographic hemi-diaphragmatic measurement was performed by a single anesthesiologist who was well trained in using LOGIQ Ultrasound (LOGIQ E10, GE medical systems ultrasound and Primary care diagnostic, LLC., Wauwatosa, WI, USA). All diaphragmatic measurements were obtained using millimeters as a unit in a supine position on the patient's right side which was the contralateral side of axillary block and surgery.

The primary endpoint was the change in diaphragmatic activity from sedation with DEX in patients with spontaneously breathing. Secondary endpoints were changes in respiration related parameters including incidence of hypoventilation episodes.

Based on preliminary results in a pilot study, a sample size of 34 patients would have 80 % power to detect to minimum 0.08 mm of TEE difference and a maximum SD difference of 0.15 considering an alpha error < 0.05 and a dropout rate of 10%. Shapiro-Wilk's test was performed to assess normal data distribution. Time-sequential change according to the three time points was subjected to repeated measures analysis of variance (ANOVA). Post-hoc test was performed by Bonferroni correction. Data are expressed as mean ± standard deviation (SD) or numbers (percentage) as appropriate. All tests were two-sided, and P < .05 was deemed statistically significant. All statistical analyses were performed using R version 4.1.2 (R Foundation for Statistical Computing, Vienna, Austria).

A total of 34 patients were enrolled for the present study, excluding 1 case due to conversion to general anesthesia as consequence of incomplete axillary brachial plexus block (Figure 1). The mean age of these patients was 39 ± 14 years. Males were predominant (57.6 %). The mean body mass index (BMI) of all patients was 24.4 ± 3.8. ASA grades I and II accounted for 78.8 % and 21.2 %, respectively. With respect to underlying diseases, three patients had hypertension and one patient had diabetes mellitus. Mean total operation time and recovery time for level 5 from level 1 of OAA/S scale after DEX infusion was stopped were 48.1 ± 25.4 mins and 82.9 ± 13.3 mins, respectively (Table 1).

CONSORT flowchart of this study. 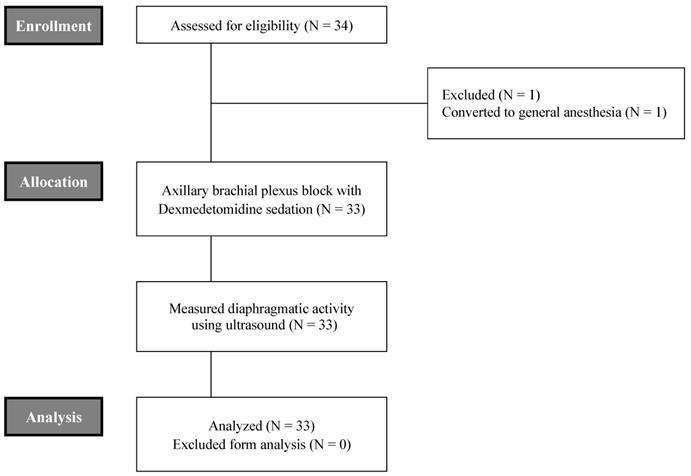 Measuring diaphragmatic thickening using M-mode in the zone of apposition (ZOA) to the rib cage from 8th to 9th intercostal space. (a) Frontal section of the chest wall illustrating the functional anatomy of the diaphragm. A, abdomen; D, diaphragm; T, thoracic cage; US, ultrasound probe; ZOA, zone of apposition. (b) Recording of changes in diaphragm thickening during spontaneous breathing using M-mode tracing. 1, end-inspiration; 2, end-expiration; D, diaphragm.

Demographic data of the study population.

Data are presented as mean ± standard deviation or numbers (proportion).

aTime to level 5 form level 1 of OAA/S scale after dexmedetomidine infusion was stopped.

Changes in variables according to the three time points.

DEX is a selective and potent α2-adrenoreceiptor agonist that has anxiolytic, sedating, and analgesic effects [15]. An outstanding feature of DEX-based sedation is that it has minimal influences on patient's respiration functions. This property of DEX regarding respiration functions makes DEX an interesting alternative sedative in many procedures including sedation for regional anesthesia. Side effects for DEX are mainly restricted to hemodynamic changes, including hypertension, bradycardia, and hypotension owing to pre- and post-synaptic α2-receptor activation known to cause vasoconstriction, vasodilatation, and reflex bradycardia [16, 17].

Regarding respiratory effects of DEX, it has little respiratory depression as the consensus under debated previous study [15]. Results of this study confirmed that DEX did not cause respiratory depression based on diaphragmatic activity measured by US, although RR was decreased after infusion of DEX. The decrease of RR was suspended after recovery from DEX sedation. In terms of DTF, it was slightly increased at T2 then that at both T0 and T1. However, such increase was not statistically significant. It was assumed the patients could enforce their respiration after awakening from DEX sedation. The EtCO2 was below 36 mmHg during the study period. The value of EtCO2 is lower than normal range. This might be due to the use of open oxygen delivery system for oxygen supply with a simple mask. Therefore, trends of EtCO2 are more valuable than absolute values of EtCO2 in this study. Trends of EtCO2 were maintained in enrolled patients during the study period, indicating that their respiratory functions were maintained during the study period. Moreover, the SpO2 maintained above 99 % during the study period. Thus, DEX is a safe sedative in both inside and outside the operating room in terms of respiration depression which is the most prominent adverse effect of any sedatives.

This study has some limitations. First, we did not use conventional methods to investigate diaphragmatic function, including transdiaphragmatic pressure (Pdi) measurement, phrenic nerve stimulation, or fluoroscopy [26]. These methods are uncomfortable and cumbersome due to their invasiveness. In addition, they require specific technique and equipment [4]. Second, we did not investigate inter-observer reproducibility of diaphragmatic US in measuring thickness as several other studies have already studied this parameter [19, 27]. In this study, placement of the patients in the supine studied using the right diaphragm because some studies have shown that the right hemi-diaphragm is the easiest one to assess this muscle [20, 28]. However, a supine position would be a less inherent resolution for ultrasound than a semi-recumbent position which is a usual position used for diaphragmatic ultrasound. A semi-recumbent position could obtain better diaphragm thickness by reducing abdominal pressure to diaphragm than a supine position [29]. To overcome these limitations, a single well-trained anesthesiologist assessed the right side of the hemidiaphragm to improve accuracy and minimize an operator-dependent bias. Third, we only studied ASA I and II patients with normal respiratory functions. Further studies are needed to evaluate effects of these complex physiological changes on patients with pre-existing respiratory complications. Finally, the potential effect of airway obstruction on diaphragmatic motion has been raised as a concern [30]. Although dexmedetomidine may cause airway obstruction during deep sedation, we did not observe snoring in any of our patients during the procedure. In addition, spontaneous breathing was always maintained. De-saturation episodes were not observed in this study. Mean values of EtCO2 were always below 36 mmHg. Such trends were maintained during DEX infusion [31].

In conclusion, this study confirmed that the diaphragmatic movement assessed using US was maintained during sedation with DEX regardless of RR change. This finding implies that DEX-induced sedation does not result in clinically significant respiratory depression, although DEX affects respiratory functions by decreasing RR and minute ventilation. Thus, DEX is a safe and useful drug for sedation without causing significant respiratory depression as evidenced by diaphragmatic US.

The authors wish to acknowledge the financial support of the Catholic Medical Center Research Foundation made in the program year of 2016.

The datasets generated and/or analyzed during the current study are not publicly available because disclosing patients' personal information is against the law. However, de-identified datasets are available from the corresponding author upon reasonable request.