The role of PTEN in puromycin aminonucleoside-induced podocyte injury 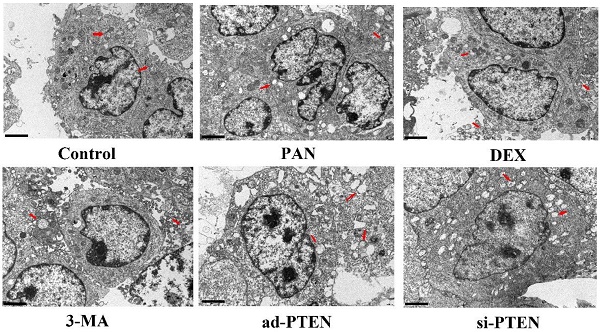 Podocytes are specialized cells of the glomerulus that play important structural and functional roles in maintaining the filtration barrier. Loss and injury of podocytes are leading factors of glomerular disease and kidney failure. Recent studies found that phosphatase and tensin homolog (PTEN) may play a critical role in maintaining the normal structure and function in podocytes. However, we still understand very little about how PTEN is regulated under podocyte injury conditions. In this study, We therefore investigated whether PTEN could play a role in podocyte injury induced by puromycin aminonucleoside (PAN), and whether dexamethasone (DEX) alleviates podocyte injury by PTEN/PI3K/Akt signaling. Our results showed that PI3K/Akt pathway was activated in podocytes exposed to PAN conditions, accompanied by down-regulation of the PTEN and microtubule-associated light chain 3 (LC3) expression.podocyte-specific knockout of PTEN significantly promoted podocyte injury, The potential renoprotection of overexpressed PTEN in podocytes was partly attributed with an improvement in autophagy and the inhibition of apoptosis.These novel findings also suggest that targeting PTEN might be a novel and promising therapeutic strategy against podocyte injury.

Immortalized mouse podocytes were cultured as previously described [9]. Briefly, the podocytes were cultured in 10% Roswell Park Memorial Institute medium 1640 (RPMI 1640, Gibco) at 33°C for proliferation. Podocytes were cultured at 37°C without interferon-gamma for 14 days to induce differentiation. To knock down PTEN, differentiated podocytes were transfected with Lipofectamine 2000 transfection reagent (Life Technologies, USA). The adenovirus (Biowit Technologies, ShenZhen, China) infected podocytes were performed for PTEN overexpress. Adenovirus generation, amplification, and titer were performed according topreviously described procedures [10-11], Infection with adenoviruses was performedata multiplicity of infection (MOI) of 100. Briefly, the podocytes were transfected with 2.0 mg vector DNA with 10ml Lipofectamine2000 in 2 ml serum-free Dulbecco's modified Eagle's medium (DMEM, Gibco) medium. At 6 h after transfection, the medium was replaced with normal DMEM/F12 medium with 10% foetal bovine serum (FBS,Gibco) for 24 h. To knock down PTEN, gene silencing of podocytes with PTEN was performed with Lipofectamine 2000 according to the manufacturers protocol, differentiated podocytes were transfected with 6 μl of PTEN siRNA mixed with 100 μl of siRNA transfection media (LifeTechnologies) for 30 min at room temperature.Subsequently, transfected podocytes were incubated for 48 h at 37℃.The sequences of three PTEN targeting siRNAs were as follows: PTEN siRNA-1, AGCTAAAGGTGAAGATATA; PTEN siRNA-2, AGTAAGGACCAGAGACAAA; PTEN siRNA-3, AGAAAGACTTGAAGGTGTA. The PCR primers used for real time PCR were PTEN-forward: CCAGTCAGAGGCGCTATGTAT. PTEN-reverse: GGCAGACCACAAACTGAGGAT.GAPDH-forward: AACAGCCTCAAGATCATCAGCA. GAPDH-reverse: ATGAGTCCTTCCACGATACCA. The relative expression levels of PTEN mRNA were determined bythe Ct(2-ΔΔCt) method. GAPDH was used for normalization.PTEN protein levelwas confired by immunoblot.

Podocytes exposed to growth restrictive conditions for > 14 days were allowed to attach to tissue culture plates for 24 h. Cells were then incubated with medium containing 10% fetal bovine serum in the presence or absence of DEX (Sigma, Co.). PAN was added to the medium after 1 h. The percentage of apoptotic elements was assessed for protein expression among cells harvested at 8 h, 24 h, and 48 h. Apoptosis was measured by staining 500 µL of cell suspension with fluorescein isothiocyanate (FITC)-conjugated Annexin V (Annexin V-FITC) (5 µL) and propidium iodide (PI) (5 µL) (Sigma, Co.) at 4°C for 10 min avoiding light. The apoptosis rates were examined by Fluorescence-activated cell sorting (FACS) Calibur flow cytometer (Becton Dickinson, USA).

The expression of PTEN in podocytes was detected using immunofluorescence, as described in a previous study [9]. Briefly, the coverslips were incubated with anti-PTEN antibody (Abcam), and then incubated with goat anti-rabbit IgG horseradish peroxidase-conjugated secondary antibody for 1 h at room temperature (Life Technologies). Finally, coverslips were mounted and images were taken using an immunofluorescence microscope (Zeiss, Germany). We counted at least 200 nuclei in triplicate in each experiment.

Western blotting was performed to measure the protein levels that were exposed to PAN in the presence and absence of DEX. Podocytes were harvested by trypsin digestion at 37°C for 3 min. Proteins were extracted for western blotting, which was performed using standard procedures. The protein concentration was determined by the bicinchoninic acid (BCA) protein assay kit (Pierce, Rockford, IL) according to the manufacturer's protocol. The blots were finally visualized using an enhanced chemiluminescence detection system (Tanon-5200Muilti, China). Quantitative analysis was performed using ImageJ Software.

Statistical analysis was performed by means of IBM SPSS 22 (IBM Corp., Armonk, NY, USA). and GraphPad Prism version 7.0 was used for the figures. Normally distributed data were represented by means±standard deviation (SD). Independent samples t-tests were used to compare differences between groups. Data among multiple groups were analyzed with one-way analysis of variance (ANOVA) followed by Tukey's multiple comparisons test, Differences with p < 0.05 were considered to be statistically significant.Each experiment was repeated independently at least three times with similar results.

We first tested the hypothesis that DEX exerted an inhibitory effect on PAN-induced podocyte injury. To this end, we measured the number of viable cells among cultured immortalized podocytes grown under restrictive conditions for 12 days and then injured by exposure to PAN. We first measured the percentage of apoptotic cells. PAN-treated podocytes showed greatly enhanced apoptosis 8 h after treatment compared to control. Apoptosis was even higher after 24 h of PAN treatment, and most podocytes were apoptotic by 48 h. The DEX group showed significantly lower rates of apoptosis than the PAN-treated group at all time points. Therefore, DEX significantly decreased PAN-induced podocyte apoptosis (P < 0.05 vs. control). As shown in Fig. 2, these results supported the notion that DEX exerts anti-apoptotic effects on cells exposed to PAN.

Analysis of apoptosis was carried out by flow cytometry at the indicated time points. (A) Representative podocyte apoptosis from each group as indicated. (B) The percentage of podocyte apoptosis in each group is indicated in the diagram as mean ± SD from three independent experiments.The percentage of apoptotic cells increased after 24 h in cells that were exposed to PAN without DEX, whereas cells that were treated with DEX were resistant to PAN-induced apoptosis. P < 0.05 versus PAN. 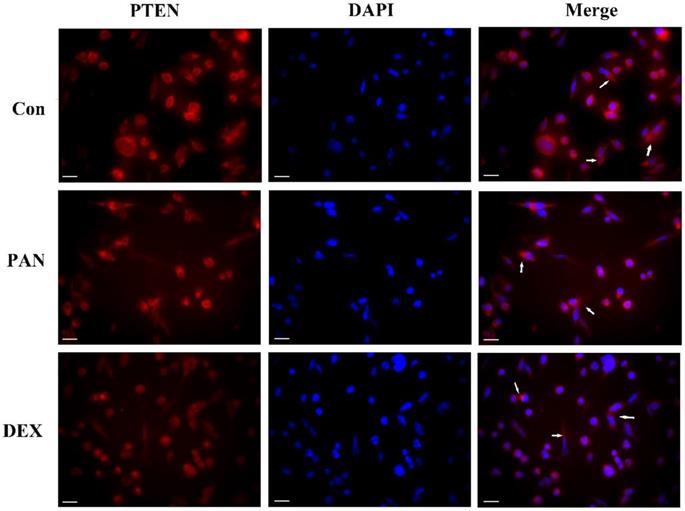 Effect of DEX on PAN-induced PTEN distribution changes in podocytes

To investigate the role of PTEN in podocyte injury, we first determined the expression of PTEN in the podocytes treated with PAN and control. The PAN-injured podocytes showed decreased PTEN expression compared to the control group. In contrast, after DEX treatment, PTEN, which significantly improved, was more homogeneously distributed in the plasma membrane. Our data indicated that PTEN contributed to podocyte injury, as evidenced by its downregulated expression in podocytes (Fig. 3).

To elucidate the mechanisms of PAN-induced podocyte injury and the potential effects of DEX on specific pathways, we performed western blotting to measure the protein expression of PTEN. Western blotting showed that PTEN expression was significantly decreased in the PAN group (P < 0.01) compared to the control. In contrast, DEX completely prevented the PAN-induced decrease in PTEN. These results demonstrated that the incubation of cultured podocytes with PAN decreased PTEN protein levels, which was prevented by the addition of DEX (P < 0.05 versus PAN) (Fig. 4).

Western blot analysis of PTEN in podocytes from the different groups. (A) Representative pictures of PTEN protein expression in the podocytes from each group as indicated. (B)Bar graphs indicated relative levels of PTEN normalized to GAPDH.

Western Blot analysis of PI3K p85 and GAPDH at different time points. (A) Representative pictures of PI3K p85 protein expression in the podocytes from each group as indicated. (B)Bar graphs indicated relative levels of PI3K p85 normalized to GAPDH.

The protein expression of the autophagy markers LC3B

To evaluate the role of autophagy on PAN-induced podocyte damage, western blot was performed to analyze the protein expressions in podocytes treated with PAN, DEX, and 3-MA (Autophagy inhibitor 3-methyladenine). The results showed that 3-MA and PAN could significantly inhibit podocyte autophagy, as evidenced by the decreased expression of LC3B protein (P < 0.05). After DEX treatment, autophagy was activated in podocytes, and the expression of LC3B significantly increased (Fig. 8).

Assessment of podocyte injury by TEM 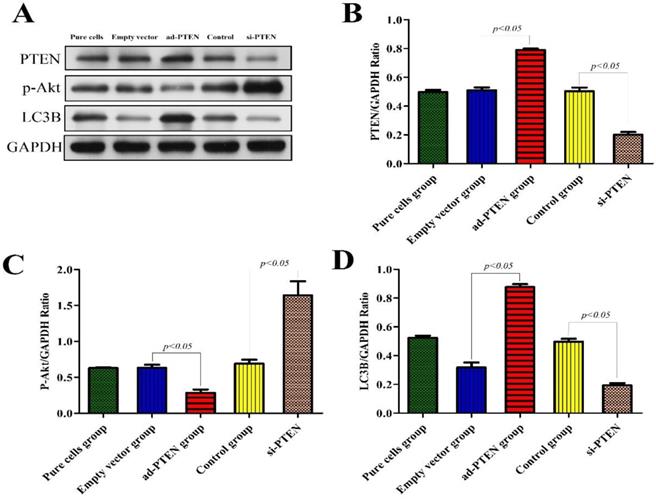 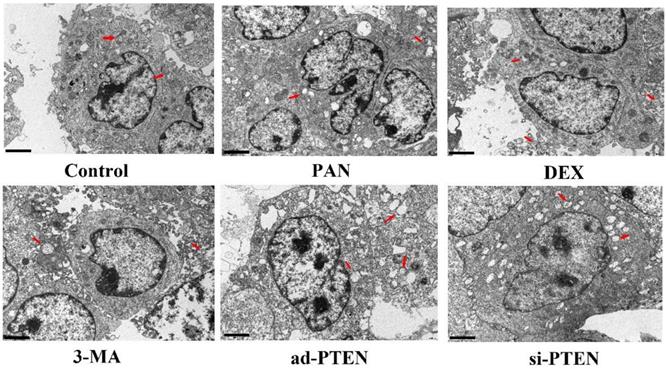 Podocytes are an important structural and functional component of the glomerular filtration membrane and the final protective barrier against protein leakage. Podocyte impairment is the main reason for proteinuria. Recent studies have revealed that podocyte injury can be induced by PAN, angiotensin II (Ang II), cyclosporine A, and stretching. However, the mechanism underlying podocyte injury and the development of proteinuria has not yet been elucidated. Glucocorticoids are widely used to treat podocyte diseases and proteinuria, and many studies have suggested that podocytes contain functional glucocorticoid receptors; therefore, DEX may exert a direct effect on podocytes contributing to their survival. We reasoned that abnormal PTEN expression produces an imbalance in podocyte function, changing the filtration rate and causing proteinuria. DEX reduced podocyte injury by increasing the expression of PTEN, thus playing a protective role against the development of proteinuria.

The current study demonstrated that PTEN was downregulated following podocyte injury in vitro. Furthermore, the underlying renoprotection mechanism of PTEN was partly associated with the improvement of autophagy and motility, and the inhibition of apoptosis in podocyte injury. PTEN is a dual-specificity lipid and protein phosphatase that inhibits cell growth, cytoskeletal remodeling, and phagocytosis [4]. As an upstream inhibitor of the PI3K/Akt signal transduction pathway, the most important substrate of PTEN is phosphatidylinositol (3, 4, 5)-triphosphate (PIP3). PIP3 is the product of phosphatidylinositol-3' kinase (PI3K) and mediates the activation of AKT. PTEN dephosphorylates PIP3 to maintain a low level of PIP3, thereby inhibiting the PI3K/AKT pathway. Therefore, some scholars refer to this pathway as the PTEN/PI3K/AKT signal pathway. Several studies have shown that PTEN is involved in the progression of kidney disease [12-14]. Moreover, in animal models of diabetic nephropathy, the expression of PTEN in glomerular mesangial cells and podocytes is significantly downregulated, suggesting that PTEN may play an important role in glomerular sclerosis. In addition, as the expression of PTEN in the kidney is downregulated, podocytes are damaged, and urine protein levels gradually increase [15-17], suggesting that PTEN may be a protective gene in the kidney. The PI3K/Akt signaling pathway is widely present in eukaryotic cells and participates in many physiological and pathological processes, such as cell growth, differentiation, and proliferation. Studies have shown that in some disease states, stabilizing the PI3K/Akt signaling pathway can effectively alleviate damage to podocytes and reduce the incidence of proteinuria [18-19]. Recently, studies have found that podocytes possess functional receptors for glucocorticoids, and that glucocorticoids can act directly on podocytes to protect them [20-23]. Glucocorticoids can mediate the activation of the PI3K/Akt pathway, inhibit cell apoptosis through a variety of mechanisms, and promote cell survival. Huber et al. showed that CD2AP can bind to PI3K p85 in podocytes and activate the PI3K/Akt signaling pathway [24-25]. A previous study also found that DEX can reverse PAN-induced podocyte apoptosis by regulating the PI3K/Akt signaling pathway [8].

In summary, this study has clarified the role and significance of PTEN in podocyte impairment and repair, shedding further light on the signaling mechanisms by which DEX inhibits PAN-induced podocyte injury. These novel findings also suggest that targeting PTEN might be a novel and promising therapeutic strategy against podocyte injury.