The ginger rhizomes (Zingiber officinale) are among the most frequently used medicinal herbs [7]. The anti-inflammatory, anti-obesity, antiemetic, antioxidant, antibacterial, and anticancer effects of ginger have been studied [8,9]. Ginger contains [6]-gingerol ([6]-GIN), [6]-shogaol, [6]-paradol, and zingerones [10]. Among these components, [6]-GIN (1-[49-hydroxy-39-methoxyphenyl]-5-hydroxy-3-decanone) has been known to exhibit anticancer efficacy in various cancer cell lines [11-15].

Apoptosis is the cell's natural mechanism for programmed cell death and is a promising target for anticancer therapy [16]. Hence, the prevention of cancer is one of the main functions of apoptosis [17]. However, the anti-cancer efficacy and related mechanisms of [6]-GIN in bladder cancer are not well understod. In the present study, we investigated the anticancer mechanisms of [6]-GIN in the human bladder cancer cell line 5637.

Cell viability was determined using an MTT (3-[4,5-dimethylthiazol-2-yl]-2,5-diphenyltetrazolium bromide) assay kit (Sigma-Aldrich). 5637 cells were treated with MTT solution and incubated for 2 h at 37 °C, following which, absorbance was measured at 570 nm.

Caspase-3 and caspase-9 assay kits (Cellular Activity Assay Kit Plus; BioMol, Plymouth, PA, USA) were used. After resuspending the cells in ice‑cold cell lysis buffer, the supernatant samples were incubated with a caspase substrate (400‑lM Ac‑DEVD‑pNA; 50 μL) at 37 °C. The fluorescence of each sample was measured at 405 nm at several time‑points.

Cells were treated with 20 μL DCF‑DA (2′,7′-dichlorodihydrofluorescein diacetate; Molecular Probes, Eugene, OR, USA) at 37 °C for 30 min and washed with PBS. Fluorescence was measured using FACS (Becton-Dickinson, Mountain View, CA, USA), at excitation and emission wavelengths of 488 and 525 nm, respectively. 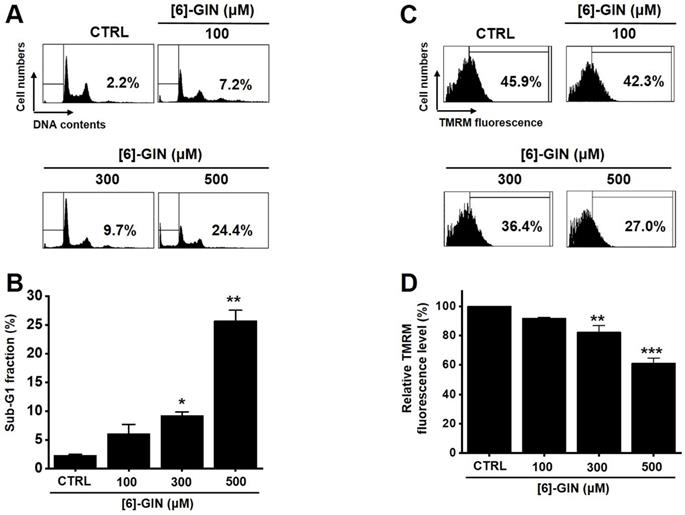 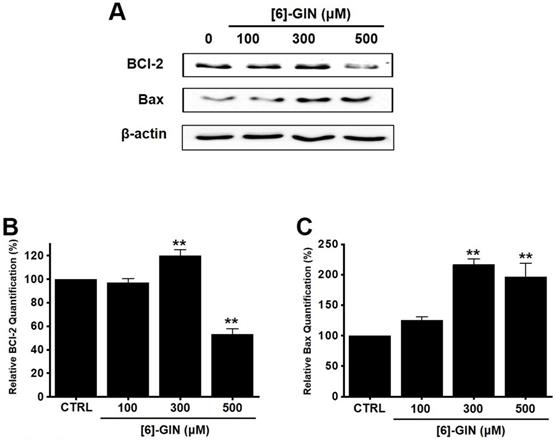 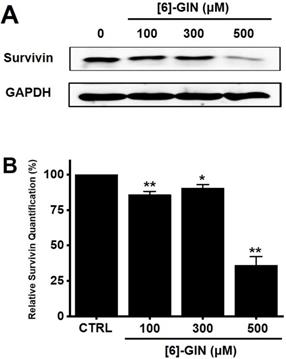 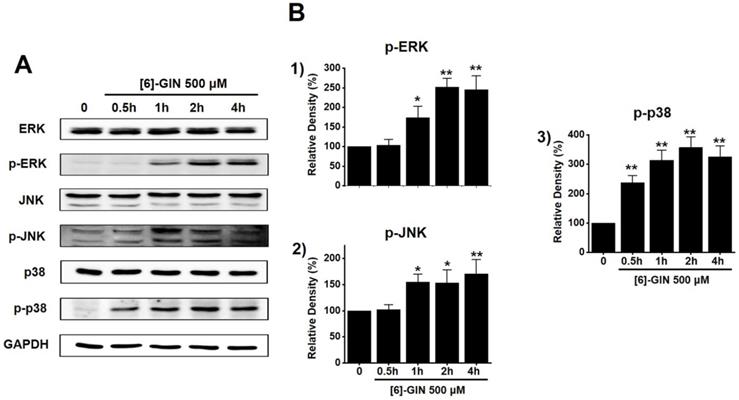 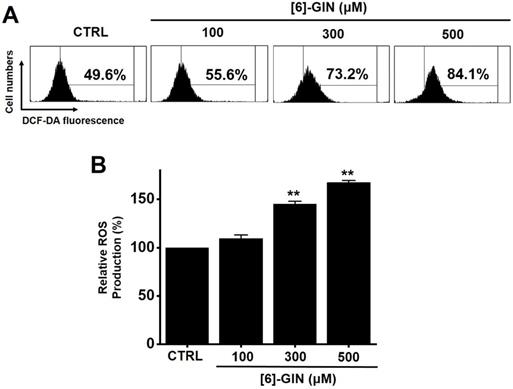 Ginger (Zingiber officinale) is one of the most frequently used herbs in traditional Asian medicine [7]. It contains pungent phenolic substances such as [6]-GIN, [6]-shogaol, [6]-paradol, and zingerone [10]. Among these, [6]-GIN is the main active polyphenol of ginger and has been reported to exhibit antioxidant, anti-inflammatory, anticancer, neuroprotective, anti-obesity, and anti-hepatic steatosis effects [26-32]. It is also known to have anticancer effects on various cancer cells [11-15, 33-35]. [6]-GIN has been shown to cause apoptosis in the cervical cancer cell line HeLa by activating the caspase-3-dependent pathway [11]. In previous studies, it inhibited the metastasis of the breast cancer cell line MDA-MB-231 and caused the apoptosis of the prostate cancer cell line LNCaP [12,13]. [6]-GIN also inhibits the growth of several types of murine tumors such as melanomas, renal cell carcinomas, and colon carcinomas [14,15]. The present study demonstrates that [6]-GIN induces the apoptosis of the bladder cancer cell line 5637.

Apoptosis is a cell's natural mechanism for inducing programmed cell death and is a promising target for anticancer therapy [16]. It is caused by caspases which are a class of cysteine proteins that cleave target proteins, and this caspase protease activation is essential for apoptosis to occur [36,37]. Four initiator caspases (caspase-2, -8, -9, -10) and three executioner caspases (caspase-3, -6, -7) are known to be involved [37]. The intrinsic mechanism of apoptosis requires mitochondria and mitochondrial proteins. We conducted the MTT experiment at various time changes. In the text, cell death can be known according to the concentration at 24 hours (Fig. 1). After 48 hours or 72 hours, it was found that at 100-300 μM, there was less death or no significant change than at 24 hours, and almost all cell death was confirmed at 500 μM. Therefore, it can be seen that 24 hours in the text is the time to confirm the most ideal cell death in a concentration-dependent manner. The overall intrinsic pathway is regulated by the BCL-2 protein family. The anti-apoptotic BCL-2 protein inhibits apoptosis by inhibiting the proapoptotic proteins Bax and BCL-2 homologous antagonist killer [37]. In addition, the extrinsic pathway uses extracellular signals to induce apoptosis. Cell death signals bind to death receptors from the tumor necrosis factor (TNF) family [37]. In the present study, BCL-2 and survivin levels decreased, while Bax expression was increased by the addition of [6]-GIN in 5637 cells (Fig. 3 and 4). The results of [6]-GIN-induced BCL downregulation show that [6]-GIN can cause apoptosis (Fig. 3). The change in survivin levels further supported this result (Fig. 4). Survivin is known to inhibit apoptosis and combines with the effective caspases of the apoptotic pathway, namely caspase-3 and -7 [38,39]. [6]-GIN increased the relative caspase-3 and caspase-9 activities, and their activities were suppressed by zVAD-fmk (Fig. 5). Moreover, [6]-GIN gradually downregulated pro-caspase-3 and -9 and upregulated the active caspases-3 and -9, and PARP cleavage protein expression. These results suggest that [6]-GIN induced apoptosis via caspase-dependent death receptor signaling and mitochondrial pathways. Also, we conducted experiments on autophagy. As a result of the experiment, there was no change in the expression of LC3-II. Therefore, it is thought that the autophagy process is not involved in the induction of apoptosis.

MAPKs are a family of kinases that are known to modulate gene expression, mitosis, proliferation, motility, metabolism, and apoptosis [40-44]. Particularly, they are involved in the survival and proliferation of various cancer cells, making them potential targets for cancer therapies [45]. Similarly, ROS are also essential for cell cycle regulation, differentiation, and migration [46]. ROS are important cell signaling molecules involved in the main mechanisms of apoptosis caused by mitochondria [46]. ROS are also involved in autophagy and necroptosis [46]. In this study, co-administration of [6]-GIN and PD98059 or SP600125 increased cell viability (Fig. 6) and the phosphorylation of MAPKs (Fig. 7). Furthermore, [6]-GIN increased ROS production levels (Fig. 8). These results suggest that MAPK and ROS signaling pathways are involved in the [6]-GIN-induced apoptosis mechanism.

TRP ion channels contribute to regulating various physiological and pathological responses of cells by controlling intracellular signaling and responses [47]. Among these, TRPM7 is known to be involved in important physiological processes such as intracellular Mg2+ regulation [48], cell viability [49], anoxic neuronal cell death [50], and gastrointestinal motility [51]. Recent studies have shown a link between TRPM7 and several cancers such as breast, ovarian, prostate, gastric, bladder, pancreatic cancers, and glioblastomas [52-57]. Other TRP ion channels called TRPV channels are critical for normal pain and temperature control [58]. TRPV2 channels have many functions, and they may be related to cancer [59,60], particularly urinary tract tumors [61,62]. TRPV2 activation induced apoptotic cell death in the T24 bladder cancer cell line [63]. In the present study, cell viability was measured after [6]-GIN and TG100-115 (TRPM7 inhibitor) or tranilast (TRPV2 inhibitor) were administered together. Co-administration of [6]-GIN and TG100-115 or tranilast decreased the cell viability (Fig. 9). These results suggest that TRPM7 or TRPV2 cation channels are involved in [6]-GIN-induced apoptosis. However, a potent and dual selective phosphoinositide 3-kinase (PI3K) inhibitor is well known in TG100-115 [64] and is also found to be effective as a TRPM7 inhibitor [24]. Tranilast is known for its efficacy in antiallergic function and inhibitor of angiogenesis [65,66] and its function as a TRPV2 inhibitor has also been revealed [25]. There are always various effects when researching using inhibitors, so be careful when you think about the results. Therefore, we think that more in-depth research is needed such as using various inhibitors to compare results with each other. TG100-115 also has the function of PI3Kγ/δ inhibitor [67]. Therefore, we checked the relevance of this function. We used GDC-0032 with the function of PI3Kγ/δ inhibitor [68]. As a result of the experiment, some apoptosis was observed in the presence of GDC-0032, but no apoptosis to the extent of TG100-115. Therefore, the reaction by TG100-115 is considered to be the result obtained by inhibiting TRPM7 rather than the reaction by PI3Kγ/δ inhibition. Several TRP ion channels are associated with cancer apoptosis and are potential therapeutic targets [69]. The most representative TRP ion channel is TRPM8. TRPM8 is overexpressed in prostate cancer and its expression level is associated with cancer cell death [70]. At the same time, menthol, a TRPM8 activator, inhibits the proliferation of prostate cancer cell lines. Because patients with chronic prostatic hyperplasia often develop prostate cancer, they may benefit from TRPM8 activator therapy [71]. Therefore, in this study, the relevance of TRPM7 or TRPV2 was mentioned. In the future, the possibility of other ion channels such as TRPM8 will be further studied.

In conclusion, the present study shows that [6]-GIN inhibits cell proliferation, increases sub‑G1 phase ratios, and depolarizes mitochondrial membrane potential in 5637 bladder cancer cells. [6]-GIN‑induced apoptosis of cancer cells was associated with proteins such as BCL‑2, survivin, Bax, caspase‑3 and caspase-9, and MAPK. Intracellular ROS levels regulate the [6]-GIN‑induced cell death and TG100-115 or tranilast had an effect of enhancing the [6]-GIN‑induced cell death. We believe that the results of this study could serve as a basis for the future development of new drugs for bladder cancer treatment.

This study was supported by Basic Science Research Program through the National Research Foundation of Korea (NRF) funded by the Ministry of Education (2021R1I1A3042479) and the Dongguk University Research Program of 2021.

28. Poltronieri J, Becceneri AB, Fuzer AM. et al. [6]-gingerol as a cancer chemopreventive agent: a review of its activity on different steps of the metastatic process. Mini Rev Med Chem. 2014;14:313-21