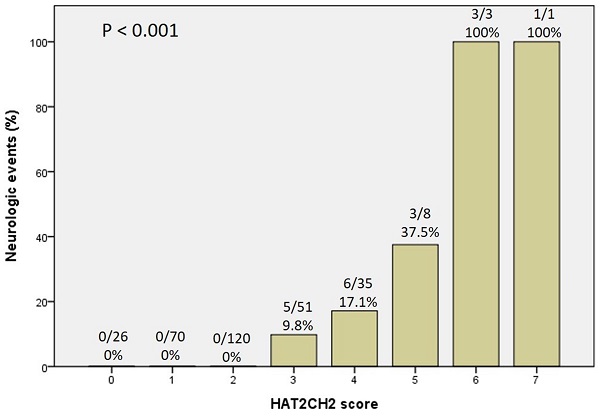 Conclusion: The HAT2CH2 score and episodes of AHRE lasting ≥ 1 minute are independent risk factors for NE in patients with CIED.

The latest European Society of Cardiology (ESC) guidelines regarding non-valvular AF [9] state that AHRE > 5-6 minutes and > 180 bpm detected by CIED increase the risk for NE and clearly recommend that AHRE should be closely monitored and treated. The CHA2DS2-VASc score is also recommended for risk stratification of NE [10]. However, the utility of CHA2DS2-VASc in non-valvular AF patients is debated and controversial, primarily because it is a vascular scoring system, which does not incorporate AF-related parameters [10]. Meta-analysis showed that the discriminative power of the CHA2DS2-VASc score was only modest in predicting NE, and results were similar in the presence or absence of non-valvular AF [10]. HASBLED score is recommended to use as a bleeding risk score [9], however, never to be used to predict NE. Also, the performance of several scoring systems (CHA2DS2-VASc score, HAT2CH2 score, C2HEST score and mCHEST score) and the optimal cutoff for AHRE duration to predict subsequent NE in patients with CIED have not been well studied previously. Therefore, more accurate NE prediction models are still needed for the non-valvular AF population and patients with CIED.

The present study aimed to investigate the performance of the HAT2CH2 score in predicting NE compared to AHRE in minutes and other scoring systems (CHA2DS2-VASc score, HASBLED score, C2HEST score and mCHEST score) in patients with CIED and without a history of AF.

The protocol for this cohort study was reviewed and approved by the ethics committee of National Cheng Kung University Hospital and was conducted according to guidelines of the International Conference on Harmonization for Good Clinical Practice (B-ER-108-278). All included patients provided signed informed consent at the time of their implantation procedures for data to be recorded for later publication in accordance with the ethical standards laid down in the 1964 Declaration of Helsinki and its later amendments.

Patients and the public did not involve in the design, or conduct, or reporting, or dissemination plans of the research.

AHRE were extracted from the devices via telemetry performed at each office visit (3~6 months). AHRE electrograms were reviewed by at least one experienced electrophysiologist, who carefully considered the possibility that AHRE included lead noise or artifacts, far-field R-waves, paroxysmal supraventricular tachycardia and visually confirmed AF in the detected AHRE. Atrial sensitivity was programmed to 0.3 mV with bipolar sensing of Medtronic devices. AHRE was defined as heart rate >175 bpm and at least 30 seconds of atrial tachyarrhythmia recorded by the devices on any day during the study period. If patients had multiple AHRE, the longest AHRE duration was recorded. The duration between data extraction and device implantation was similar in every subject. No consistent increase of AHRE in different extraction after device implantation was found.

Categorical variables are presented as percentages and continuous variables as means and standard deviations (mean ± SD) for normally distributed values or medians and interquartile interval (IQI) for non-normally distributed values. The normal distribution for continuous variables was assessed using the Kolmogorov-Smirnov method. Pearson's chi-square test or Fisher's exact test was used to determine differences in baseline characteristics for categorical variables, and a two-sample student's t-test or Mann-Whitney U-test was used to analyze continuous variables. Survival was estimated by the Kaplan-Meier method, and differences in survival were evaluated with the log-rank test. Multivariable Cox regression analysis was used to identify variables associated with NE occurrence, reported as hazard ratios (HR) with 95% confidence intervals (CI). If the p value for any factor in univariable analysis was < 0.05, the parameter was entered into multivariable analysis. Because CHA2DS2-VASc scores, HASBLED scores, and HAT2CH2 scores overlapped many factors in univariate analysis, they were used as independent factors in multivariable Cox regression analysis. We assured that the proportional hazard equation was met in each variables using log minus log plot, which each curve did not meet during the observation periods. Indicators of CHA2DS2-VASc scores, HASBLED scores, and HAT2CH2 scores were used separately as time-dependent covariates in Cox proportional hazards regression, to compute hazard ratios (HR) and adjusted HR in multivariable models including clinical variables, such as prior stroke, diabetes, hyperlipidemia, and AHRE ≥ 1 minute. We used the linear regression analysis to address the multicollinearity. A tolerance of less than 0.20 or 0.10 and/or a VIF (variance inflation factor) of 5 or 10 and above indicates a multicollinearity problem. We assured that each variable selection had no multicollinearity problem. The receiver-operating characteristic (ROC) area under the curve (AUC) for AHRE and the HAT2CH2 score and the associated 95% confidence intervals (CI) were evaluated for associations with future NE after CIED implantation. The optimal cutoff values with the highest Youden index were chosen based on the results of ROC curve analysis and used to evaluate the associated values of AHRE in minutes and HAT2CH2 score for determining NE. For all comparisons, p < 0.05 was considered statistically significant. All data were analyzed using SPSS statistical package version 23.0 (SPSS Inc. Chicago, IL, USA).

Between January 1, 2014 and April, 2021, a total of 453 consecutive patients receiving Medtronic CIED transplantation at National Cheng Kung University Hospital were recruited initially. Patients with previous AF (n=139) were excluded. The final analysis included data of 314 patients, of whom 18 had experienced NE.

Data are presented as medians (interquartile interval) or n (%). Non-parametric continuous variables, as assessed using the Kolmogorov-Smirnov method, were analyzed using the Mann-Whitney U test. Statistical significance is set at p < 0.05.

oHASBLED score = Range from 0 to 9. Point score is calculated as 1 point each for hypertension, abnormal kidney function, abnormal liver function, prior stroke, prior bleeding or bleeding predisposition, labile international normalized ratio (INR), older than 65 years, medication usage predisposing to bleeding, and alcohol use.

Types and incidences of neurologic events

The leading scoring systems for predicting subsequent NE after CIED implantation include the CHA2DS2-VASc score, HAT2CH2 score, C2HEST score and mCHEST score, often used in conjunction with the optimal cutoff for AHRE duration. Of these, the CHA2DS2-VASc score is a well-known and guideline-recommended measure (9) for NE risk prediction. However, recent studies [10,11] have reported that the CHA2DS2-VASc score has insufficient discriminative power for NE prediction. The meta-analysis of Siddiqi et al. [10] reviewed and analyzed 9 studies of patients (n = 453747) with non-valvular AF and 10 studies of patients (n = 138262) without non-valvular AF and found only a modest discriminative power using C-statistics. Similarly, Hu et al. [11] used the Taiwan Health Insurance Research Database to select and evaluate a large group of patients with venous thromboembolism (n= 56996), finding that the area under the curve of ROC of CHA2DS2-VASc score for predicting NE was 0.66, which was also modest. 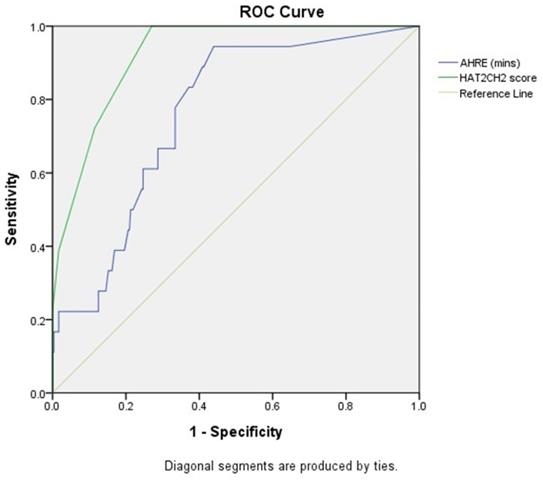 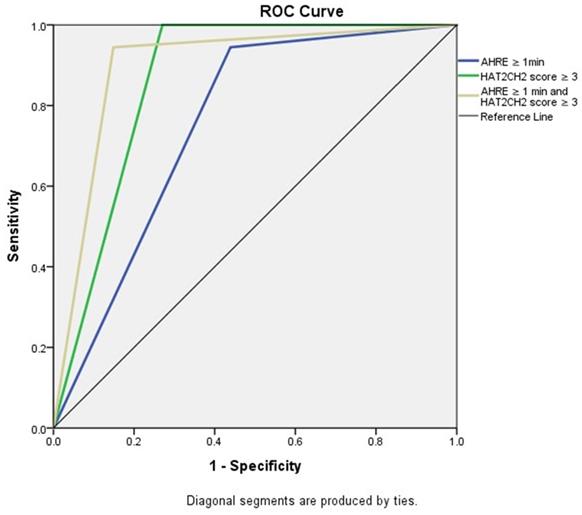 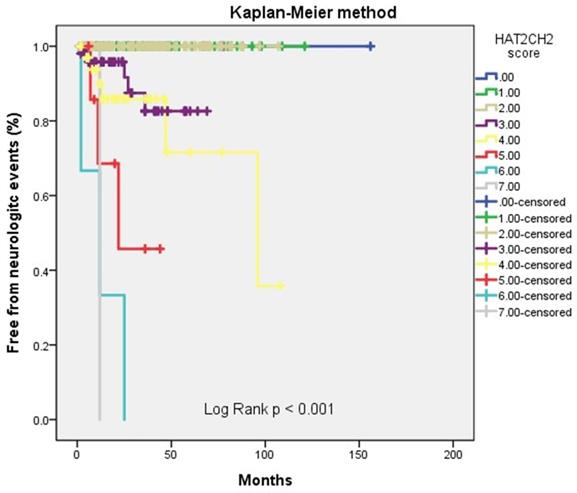 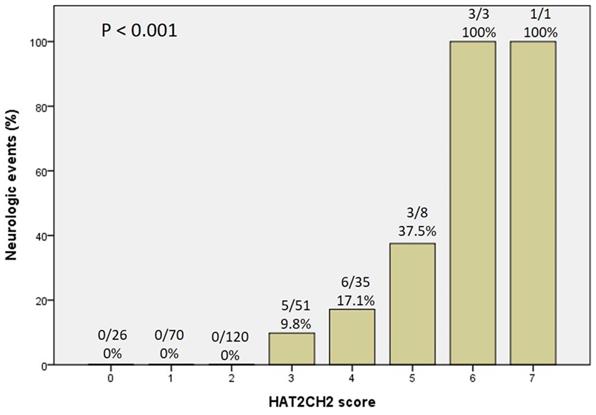 Results of the present study also demonstrated that the HAT2CH2 score (AUC of ROC 0.65) independently predicts new onset AF in this study population (data not shown). The HAT2CH2 score includes COPD as one point, rather than diabetes or vascular disease as one point in the CHA2DS2-VASc score, which highlights the varied impact of different diseases in NE in patients with CIED based on our study results. COPD-related systemic inflammation and oxidative stress may promote platelet hyperactivity and cerebral vascular dysfunction [12], and COPD increases the risk of NE, independent of other shared risk factors of cardiovascular disease [13]. Smoking has been recognized as a major causative factor for COPD [14] and also a leading cause of NE [15]. Additional prospective studies are required to elucidate the possible mechanisms underlying COPD-related NE risk, and then to identify effective preventive interventions.

Different cutoff values of AHRE have been proposed previously. One Japanese study even demonstrated that AHRE lasting ≥ 30 seconds was associated with increased risk of stroke [16]. That study enrolled 348 patients who received CIED from Medtronic (atrial rate > 175 beats/minutes), Abbott (atrial rate > 190 beats/minutes), and Biotronik (atrial rate > 200 beats/minutes). Atrial sensitivity was programmed to 0.5 mV with bipolar sensing. Another study [17] enrolled 355 patients who received dual chamber pacemakers from Medtronic (atrial rate > 175 beats/minutes) and Biotronik (atrial rate > 200 beats/minutes) and atrial sensitivity was programmed to 0.3 mV with Medtronic bipolar sensing and 0.2 mV with Bieotronic bipolar sensing. That study also revealed that AHRE ≥ 2 minutes increased risk of NE. In the present study, all 314 patients included had been implanted with Medtronic CIED to prevent the different default settings for AHRE detection from affecting multivariate analysis; we also did the multivariate analysis using AHRE ≥ 2 minutes but the HR was lower than AHRE ≥ 1 minute (data not shown), so we concluded that the optimal AHRE cutoff was 1 minute for subsequent NE after CIED implantation. Even though the latest guidelines [9] recommend that AHRE > 5-6 minutes and > 180 bpm detected by CIED increase the risk for NE, we still suggest that physicians should confirm the default setting of AHRE after patients have undergone CIED implantation.

The present study has several limitations. First, this was an observational study with a relatively small number of patients with CIED in a hospital setting, and all patients were Taiwanese. As a result, causality cannot be inferred between AHRE and NE, and the presence of confounding factors cannot be denied. Also, the results may not be generalizable to other populations or locations. Second, this study did not investigate heart rhythms at the time of NE onset, which may not give a complete picture of individual patient conditions. Third, in this retrospective analysis of patient data, we could not confirm that patients had started anticoagulants due to CIED-detected AHRE, although these patients were not excluded because no significant differences were found between anticoagulants use and presence (1, 5.6%) or absence (29, 9.8%) of NE (p = 1.000), as shown in Table 1. Prospective multicenter studies with larger samples are required to confirm results of the present study. Fourth, we did not evaluate the bleeding events after the patients receiving anti-thrombotic therapy for index NE. Every physician should measure the HASBLED score to know the bleeding risk. Fifth, we did not analyze the possible competing hazards (such as death) in this study. Sixth, we did not record the history of the anti-thrombotic drugs during follow-up periods, which may be a bias in such as a retrospective study. Finally, the major limitation was retrospective, relative small case numbers, and low rates of outcome (only 18 events). The fact is that the study could not make definite conclusions.

The authors would like to thank Convergence CT for assistance with English editing of the manuscript.

Approved by the Institutional Review Board of National Cheng Kung University Hospital (B-ER-108-278).