Background: About 10% of gastric cancer (GC) has been described to be Epstein-Barr virus (EBV) positive. Previous researches have described the association between EBV and GC. However, the association of EBV with atrophic gastritis (AG) is underrecognized. Our study aimed to investigate the relationship between EBV and AG and assess the influence of EBV on gastric function.

Conclusion: EBV infection significantly increased the risk of AG, especially in H. pylori-negative patients. The circulating EBV DNA had a potential in predicting the risk of atrophic gastritis.

Gastric cancer (GC) is one of the most common malignancies worldwide, and it is the fourth leading cause of cancer-related death [1]. According to Lauren's classification, two histological subtypes of GC can be distinguished: intestinal and diffuse [2]. About 90% of GC belong to intestinal-type GC, which represents the outcome of the inflammation-atrophic-metaplasia-dysplasia-carcinoma sequence, known as the Correa cascade [3]. GC is a multifactorial disease, where many factors can influence its occurrence and development, include environmental, genetic, and infective factors [4]. Regarding infective factors, Helicobacter pylori (H. pylori) and Epstein-Barr virus (EBV) have been well accepted as class I carcinogens and associated with GC occurrence and development [5].

EBV is a herpesvirus that favors human B lymphocytes [6]. More than 90% of adults have been infected by EBV, and it is asymptomatic in the majority of carriers. EBV is closely associated with a variety of human malignant tumors, such as Burkitt's lymphoma, nasopharyngeal cancer, Hodgkin's disease, and GC, et al. [7] About 10% of GC has been described to be EBV-positive[8]. Many researches have described the association between EBV and GC [9]. Atrophic gastritis (AG) is considered to be gastric precancerous diseases, which are independent risk factors of GC and provide background for the possible development of GC [10]. Previous literature mentioned that the virus is localized in the atrophic epithelium in EBV-positive GC patients [11], and the lesions of EBV-related GC occur in the middle area near the atrophic boundary [12]. EBV infection is also associated with an increased risk of GC and its precursor AG. Most patients who were EBV-positive had moderate AG [13, 14]. These results suggested that EBV plays an important role in the development of GC. However, the association of EBV with AG is underrecognized. Thus, it would be greatly essential to identify the relationship between EBV and gastric precancerous diseases, and be beneficial for GC prevention, treatment, and block the progression of precancerous diseases.

The EBV detection methods include serological tests (anti-VCA IgM, anti-VCA IgG, anti-EBNA 1 IgG, and anti-EA(D) IgG) and circulating EBV DNA [15]. EBV DNA and viral load can be detected by PCR, which has been already applied to examine the association between the EBV DNA and clinical courses of EBV-associated diseases using peripheral blood [16-18]. EBV DNA is more sensitive and specific than serological methods [19]. Based on this background, we applied real-time Q-PCR (RT-qPCR) to detect the copy number of EBV DNA using peripheral blood.

This study aimed to investigate the relationship between EBV with AG and to assess the influence of EBV on gastric function.

This study enrolled 468 patients who underwent upper digestive endoscopy in the department of Gastroenterology of Tongji Hospital (Wuhan, China) from 2016 to 2021. The symptoms include epigastric pain, abdominal distension, heart burn, regurgitation, and nausea. Inclusion criteria for this study: 1) age from 18-80 years; 2) non-atrophic gastritis (NAG) and AG; 3) complete 13C urease breath test (13C-UBT), circulating EBV DNA and gastric function indicators such as pepsinogen I (PG I), pepsinogen II (PG II) and calculate the ratio of pepsinogen I and II (PGR). Exclusion criteria were as follows: 1) the history of gastric dysplasia or cancer, nasopharyngeal carcinoma or other malignant tumors; 2) autoimmune atrophic gastritis; 3) other types of chronic gastritis: such as NSAIDS-related gastritis, Eosinophilic gastritis, Menetrier disease, et al. The study was conducted in accordance with the Declaration of Helsinki (as revised in 2013). The study was approved by the Ethical Committees of Tongji Hospital (TJ-IRB20220534).

All subjects underwent gastroscopy with two biopsies taken from the gastric antrum and two biopsies taken from the gastric corpus. The gastroscopy of all patients was performed by experienced endoscopists using an Olympus endoscopy (XQ260, XQ290, Tokyo, Japan). Histopathological diagnosis was performed by experienced digestive pathologists, who observed the changes of atrophic. Gastric inflammation and atrophy were diagnosed according to the Chinese Consensus on Chronic Gastritis (2017, Shanghai, China). Subjects with multiple lesions were diagnosed based on the most severe lesion.

H. pylori infection was detected by 13C-UBT, which is widely considered as one of the most accurate tests for H. pylori infection detection. Proton pump inhibitors, acid-suppressive drugs, and antibiotics were not permitted for 2 weeks prior to the 13C-UBT. The 13C-UBT was detected using a urea 13C capsule breath test kit (KEADWAY, Shenzhen, China). After fasting 2 hours, the subjects were given a tablet with 13C and collected the breath samples were at 0 min and 30 min. A 13C-Breath Test Analyzer (HeliFANplus, Germany) aided in data analysis. Positivity was defined as a value >4.0, indicating the presence of H. pylori infection.

Peripheral venous blood sample (5ml) was collected into EDTA-containing tubes from all subjects. The RT-qPCR system was developed to detect EBV DNA. This was used to identify the Bam HI-W region of the EBV genome. The Bam HI-W consisted of the amplification primers W-44F (5′-CCCAACACTCCACCA CACC-3′) and W-119R (5′-TCTTAGGAGCTGTCCGAGGG-3′) and the dual-labeled fluorescent probe W-67T (5′-[FAM] CACACACTACACACACCCACCCGTCTC [TAMRA]-3′).

Fluorogenic PCR reactions were set up in a reaction volume of 50ul using the TaqMan PCR core Reagent Kit (TGFQ01-001, Targene, Guangzhou, China). Thermal cycling was initiated with a 2-minute denaturation step at 93 °C, followed by 10 cycles at 93 °C for 45 seconds and 55 °C for 1 minute, and 30 cycles at 93 °C for 30 seconds and at 55 °C for 45 seconds. Duplicate samples were analyzed, and the mean quantity of each duplicate was used for further concentration calculations. Multiple negative blanks were included in every analysis. In our study center, a cutoff value of 500 copies/ml was set according to the lower limit of detection. EBV DNA ≥ 500 copies /ml was defined as EBV-positive.

Detection of serum PG I and PG II

SPSS 26.0 was used for the statistical analysis (SPSS, Chicago, IL, USA). Descriptive statistics were based on the total number (%) and expressed as mean ± standard deviation. Chi-squared or Fisher tests were used for quantitative data analysis. To evaluate the risk provided by EBV and H. pylori to AG, the odd rates (ORs) were estimated. The group of EBV and H. pylori double-positive patients was compared with the group infected with only H. pylori or EBV, A two-sided P-value of <0.05 was considered statically significant.

Baseline Characteristics of the Subjects

The baseline characteristics of patients with NAG and AG

Distribution Characteristics of Circulating EBV DNA of the Subjects

We analyzed the distribution of circulating EBV DNA based on age, smoking, drinking, gender, H. pylori infection status, and gastritis classification (Table 2). We found that the EBV DNA-positive were correlated with the older group (≥50 years) and AG group (P<0.05). No significant difference was found between EBV and gender, smoking, drinking and H. pylori infection status (P>0.05).

The characteristics on quantitative of circulating EBV DNA 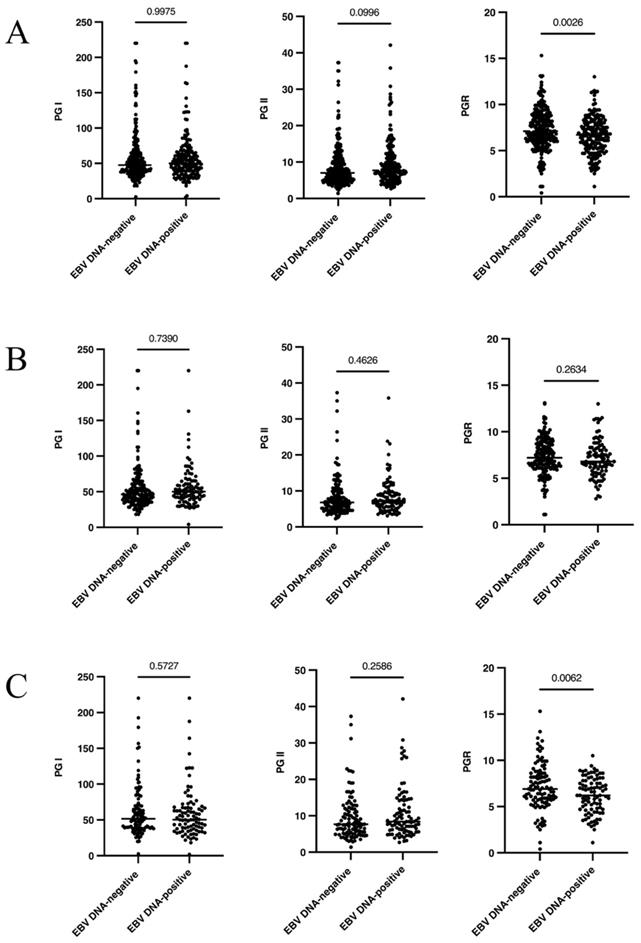 To explore the interaction among AG related infective factors, the relationship between circulating EBV DNA and H. pylori was analyzed. There was no difference between EBV DNA and H. pylori, regardless of whether the overall population or the subgroups (P>0.05) (Table 4). However, we found that EBV DNA-positive increased the risk of AG by 1.619-fold in the H. pylori-negative subgroup (Table 3) and the serum PGR also significantly decreased in EBV DNA-positive patients of the AG subgroup (Figure 1C).

The association between circulating EBV-DNA with H. pylori infection status

Long lasting inflammation triggers serious damage to the gastric epithelium, increasing the risk to develop precancerous lesions, which in turn increase the risk to end up with a life-threatening GC. More than 90% of GC is related to persistent inflammation. EBV and H. pylori are both considered the main risk factors for chronic inflammatory responses triggering tissue damage [23]. Previous literature mentioned that in EBV-positive gastric carcinoma, the virus was localized in the atrophic epithelium [12]. Nevertheless, Hungermann et al. [24] found evidence that EBV infected epithelial cells of AG mucosa with a relatively low frequency, which is not an early event in GC. Cárdenas-Mondragón et al. [20] study showed that EBV-positive conferred 3.5-fold increased AG risk. Wang et al. [10] found that EBV infection could increase AG risk, especially in the younger and female subgroups. In our study, we found that EBV positive increased the risk of AG by 1.509-fold (P=0.031, 95% CI 1.037-2.194).

H. pylori infection was considered to be the prominent cause of GC, which spreads from contaminated food. H. pylori was mainly spread transmitted orally and adhered to the gastric epithelial cells, leading to oxidative stress, toxin, and necrosis of cells, which further lead to chronic inflammation epigenetic modification, and mutation [28]. However, EBV spreads mainly by the oral route through contact with saliva. More than 90% of adults have EBV in the latent stage in B cells [31]. The infected B cells sometimes enter the lytic cycle, producing virus particles that can spread to other hosts. Stable EBV infection and latent EBV gene expression are favorable for promoting the transformation of pre-invasive nasopharyngeal epithelial cells into carcinoma [32]. Moreover, similar to the mechanism of H. pylori induced GC, EBV may indirectly induce chronic inflammation during its viral reactivation cycle by recruiting high levels of immune cell infiltration and thereby promoting tissue damage [33]. Several researched have shown that the cooperation of infectious agents may exacerbate their effect. EBV DNA load in H. pylori-positive individuals was significantly increased, which suggested that H. pylori might play a role in regulating the transformation of EBV to the cleavage stage [34]. H. pylori Cag A was demonstrated associated with the development of GC. Saju et al. [35] discovered that host protein SHP 1 interacts with H. pylori Cag A protein and dephosphorylates Cag A, which antagonized the Cag A oncogenic activity. However, EBV co-infection results in methylation of the host SHP 1 and keeps Cag A phosphorylation and thus may increase the oncogenic potential of Cag A. Fekadu et al. [36] found that H. pylori was exposed to the principal EBV receptor, CD21, in negative gastric epithelial cells, which could induce the expression of EBV receptors EphA2 and NMHC-IIA, and promote the EBV infection. And EphA2 or NMHC-IIA siRNA knockdown, EBV infection was significantly decreased. These results suggest that EBV and H. pylori may have some synergistic effects on the development of GC. In the future, there should be some studies and experiments with a more rigorous design, to confirm the mechanism of how EBV and/or H. pylori infection interacts.

There were also some research limitations in this study. Firstly, geographical differences in EBV positive had been observed. Our study was a single-center study, we should enroll more patients from different hospitals and regions for research in the future. Second, we enrolled every patient with NAG or AG who came to the institute for diagnosis in a convenient sample instead of paired selection. Lastly, in situ hybridization (ISH) of tissue, a gold benchmark in the determination of EBV infection, was lacking in this study. We should comprehensively evaluate EBV infection, include circulating EBV DNA, multiple specific antibodies for EBV antigens, and ISH, et al.