The role of circular RNA in Diabetic Nephropathy 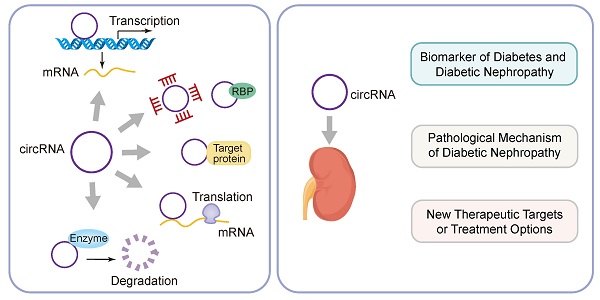 Diabetic nephropathy (DKD) is the most common chronic microvascular complication of diabetes. About 20%-40% of diabetics develop DKD, which eventually leads to chronic kidney failure. Although progress has been made in diagnosis and treatment tools, diabetic nephropathy is still a major clinical problem. In recent years, circular RNA (CircRNA) has become a research hotspot. CircRNA is a non-coding RNA formed by covalently closing the 5 'and 3' ends of the precursor RNA. CircRNA has powerful biological functions. CircRNA can regulate the expression of target genes through competitive binding with microRNA, thus playing the biological role of endogenous RNA (CeRNA). Many studies have shown that circRNAs plays an important role in malignant tumors, autoimmune system diseases, coronary heart disease and other diseases. More and more studies have shown that it can also be used as a biomarker of diabetes and diabetic nephropathy. This review summarizes the origin, classification, biogenesis and regulatory mechanisms of circRNAs. In addition, the pathogenesis and clinical significance of circRNAs as competing endogenous RNAs involved in diabetic nephropathy were also introduced. This will help us fully understand the pathological mechanism of diabetic nephropathy and develop new therapeutic targets or treatment options to improve the prognosis of patients with diabetic nephropathy.