Comparison of the effects of dexmedetomidine and propofol on hypothermia in patients under spinal anesthesia: a prospective, randomized, and controlled trial 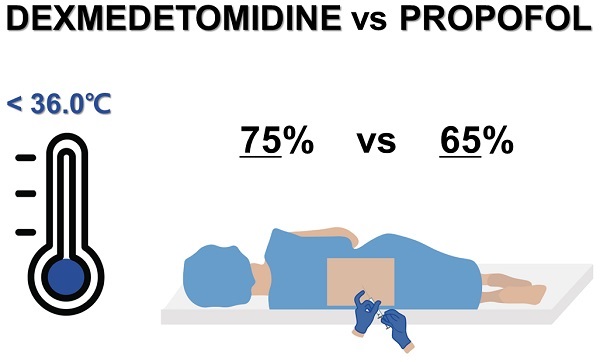 Background: Redistribution hypothermia caused by vasodilation during anesthesia is the primary cause of perioperative hypothermia. Propofol exerts a dose-dependent vasodilatory effect, whereas dexmedetomidine induces peripheral vasoconstriction at high plasma concentrations. This study compared the effects of dexmedetomidine and propofol on core temperature in patients undergoing surgery under spinal anesthesia.

Conclusions: In patients undergoing spinal anesthesia with moderate sedation, the effect of dexmedetomidine on patients' core temperature was similar to that of propofol.

Dexmedetomidine is a potent and highly selective α2-adrenoceptor agonist; at high plasma concentrations or after rapid intravenous administration, dexmedetomidine acts directly on postsynaptic vascular smooth muscle, resulting in vasoconstriction [10,11]. In previous studies, dexmedetomidine increased systemic vascular resistance at plasma concentrations of 0.7-14.7 ng/mL [12], while propofol caused vasodilation in a dose-dependent manner [13]. Therefore, we hypothesized that dexmedetomidine would be more advantageous than propofol in maintaining normal core temperature, because core-to-peripheral redistribution of body heat due to vasodilation at 30 min to 1 h after induction of general or neuraxial anesthesia is the primary cause of hypothermia [1]. Previous studies have mainly evaluated differences in the efficacy of sedatives used during spinal anesthesia in terms of sedation, cardio-respiratory profile, and psychomotor performance [8,9]. However, to date the effects of intraoperative administration of propofol and dexmedetomidine on thermoregulation in patients undergoing spinal anesthesia have not been compared. Therefore, we compared the core temperatures of patients who received dexmedetomidine or propofol for moderate sedation during orthopedic lower extremity surgery under spinal anesthesia.

This prospective, randomized, controlled study was approved by Institutional Review Board (approval number: 2020-07-024) and registered at the Korea Clinical Research Information Service. Written informed consent was obtained from patients and/or their representative. The study protocol adhered to the Consolidated Standards of Reporting Trials (CONSORT) guidelines.

In accordance with our institutional protocol for general anesthesia, patients fasted for at least 8 hours preoperatively. The baseline core temperature was measured in the preoperative holding area using an infrared tympanic thermometer (Thermoscan IRT 4020; Braun GmbH, Kronberg, Germany), which was accurate to ± 0.2°C at temperatures of 35.5-42°C and ± 0.3°C at temperatures < 35.5°C.

In the operating room, before and during the spinal anesthesia, electrocardiogram, noninvasive blood pressure, and pulse oximetry were monitored. Spinal anesthesia was administered in the lateral decubitus position with the surgical site down. After the skin had been prepared and lidocaine injected, the dura was punctured at the L3-4 or L4-5 level using a 25-gauge Quincke needle. Once the clear cerebrospinal fluid was observed, 0.5% hyperbaric bupivacaine (10-12 mg) and fentanyl (10 μg) were injected. Anesthesia was considered adequate if the sensory block level was higher than T12 on pinprick test at 5 min after spinal anesthesia.

In the post-anesthesia care unit (PACU), the thermal comfort score (0 = completely uncomfortable; 10 = completely comfortable) was evaluated and the core temperature was measured every 15 min. Patients who complained of feeling cold or had a core temperature < 36°C received forced-air warming. The forced-air warmer was set at 43°C (“high” setting) but lowered to 38°C (“medium” setting) in the event of patient discomfort. Pain was treated with 0.5 μg/kg of fentanyl, shivering grade ≥ 2 (0 = no shivering; 1 = shivering localized to neck and thorax; 2 = shivering involving the upper extremities with or without shivering in the thorax; and 3 = shivering involving the entire body) was treated with 25 mg of meperidine, and nausea or vomiting was treated with 10 mg of metoclopramide.

The minimum difference required to detect perioperative temperature-related adverse outcomes is 0.5°C [3,6]. To detect a 0.5°C (± 0.5°C) difference in core temperature at the end of surgery between two groups, with a power of 0.8 and an α-value of 0.05 (two-sided), 16 patients per group was required. Considering a dropout rate of 20%, 20 patients per group were recruited.

Table 2 lists perioperative body temperatures and outcomes. The preoperative baseline temperatures of the two groups were comparable. The primary outcome variable, i.e., core temperature at the end of surgery, did not differ significantly between the two groups (36.1 ± 0.7°C and 36.4 ± 0.4°C in the propofol and dexmedetomidine groups, respectively; mean difference -0.29; 95% confidence interval [CI] -0.65 to 0.08; P = 0.118). The lowest perioperative body temperature (P = 0.424), incidence and severity of perioperative hypothermia (P = 0.490 and P = 0.298, respectively), thermal comfort score at arrival in the PACU (P = 0.640), and grade of shivering (P > 0.999) also did not differ significantly between the groups. 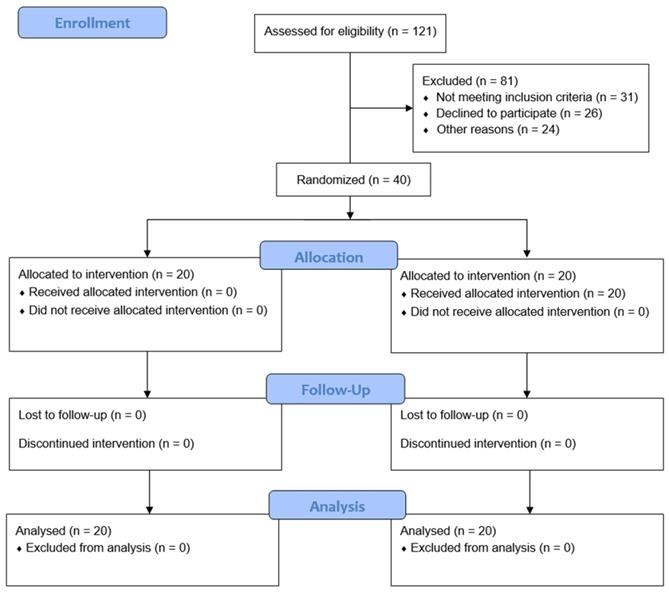 Changes in core temperature during the perioperative period. Values are presented as mean ± standard deviation. Baseline, arrival in the preoperative holding area; T0-45, immediately to 45 min after induction of spinal anesthesia (checked every 15 minutes); Tend, at the end of surgery; P0-60, immediately to 60 min after arrival to the post-anesthetic care unit (checked every 15 minutes). *P < 0.05, vs. baseline in each group (Bonferroni corrected). Core temperatures did not differ between groups at any time point (all P > 0.05, Bonferroni corrected) 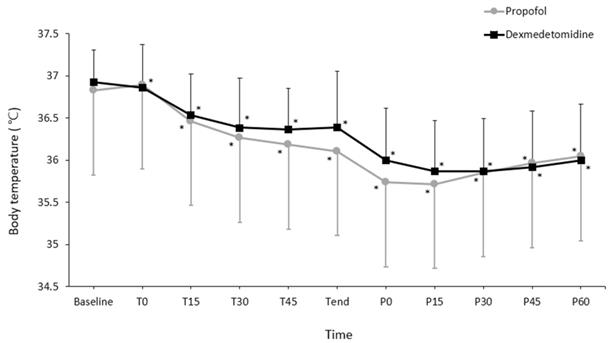 Changes in the Observer's Assessment of Alertness/Sedation (OAA/S) scale during the anesthesia. Values are presented as means. T0-45, immediately to 45 min after induction of spinal anesthesia (checked every 15 minutes); Tend, at the end of surgery. *P < 0.05, vs. baseline in each group (Bonferroni corrected). 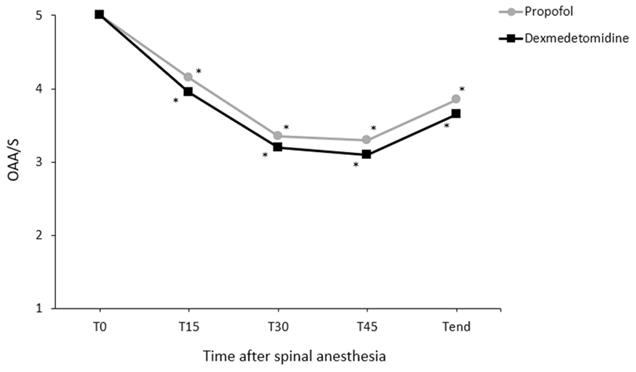 The objective of this study was to investigate the effects of dexmedetomidine and propofol on hypothermia during spinal anesthesia with moderate sedation. Core temperature at the end of surgery (the primary outcome), as well as the lowest perioperative body temperature, incidence and severity of perioperative hypothermia, thermal comfort score, and shivering grade (secondary outcomes), did not differ significantly between the two groups. Also, although changes in core temperature during the perioperative period showed a difference between the two groups, pairwise comparisons showed no intergroup difference at any measurement time point. These results imply that the effect of dexmedetomidine is similar to propofol in the prevention of hypothermia in patients receiving spinal anesthesia under moderate sedation.

Similar to general anesthesia, spinal anesthesia inhibits central thermoregulation. Additionally, spinal anesthesia prevents vasoconstriction in anesthetized regions by inhibiting the peripheral sympathetic motor nerves [6]. Spinal-anesthesia-induced blockade of the preganglionic sympathetic fibers in anesthetized regions leads to vasodilation [15]. Consequently, the vasoconstriction threshold of patients who receive spinal anesthesia decreases by approximately 0.6°C, and unwarmed anesthetized patients typically experience a decrease in core temperature of 1-2°C [5,6]. Consistent with these reports, the lowest perioperative body temperature decreased by a mean of more than 1°C in both groups compared to the preoperative temperature. Additionally, the incidences of perioperative hypothermia were 75% and 65% in the propofol and dexmedetomidine groups, respectively, despite the intraoperative use of forced-air warming.

Another important factor affecting the incidence of hypothermia is intrathecal use of fentanyl and bupivacaine. Fentanyl is a highly ionized, lipophilic µ-receptor agonist that inhibits shivering by acting on the central thermoregulator and afferent thermal inputs in the spinal cord [18]. Shivering is an unpleasant symptom that increases oxygen consumption, lactic acidosis, carbon dioxide production, and postoperative pain [1]. Prevention of shivering with fentanyl improves symptoms but increases the risk of hypothermia due to inhibition of the thermoregulatory defense against cold [5,6,18]. Therefore, the use of fentanyl may mask the direct and singular effects of drugs on hypothermia.

This study had several limitations. First, we used an infrared tympanic thermometer to estimate the core temperature. An infrared tympanic thermometer is easy to use in awake patients and is therefore commonly used in patients receiving regional anesthesia [4]. However, the reliability of infrared tympanic thermometers is not clear [19]. Standard core temperature can also be measured at the pulmonary artery, esophagus, or nasopharynx using a thermistor or thermocouple probe [6]. However, these modalities are difficult to use in patients receiving regional anesthesia [20]. Importantly, the measurement site has more influence on the precision and accuracy of temperature measurement than the measurement device [5]. Additionally, measurements collected using an infrared tympanic thermometer have similar accuracy to those collected using pulmonary artery catheterization [21]. Second, the doses of dexmedetomidine and propofol used in the present study were adjusted to provide moderate sedation. The sedative effect of dexmedetomidine is concentration-dependent: a plasma concentration of 0.2-2.0 ng/mL causes minimal or moderate sedation, whereas a plasma concentration > 2.0 ng/mL causes deep sedation [11,22]. The hypotensive effect of dexmedetomidine is overwhelmed by the hypertensive effect of dexmedetomidine due to peripheral vasoconstriction at concentrations of 1.9-3.2 ng/mL [22]. If the doses of the drugs were adjusted to achieve deep sedation, the doses of dexmedetomidine and propofol would be higher than those used in the present study, leading to different results. These limitations should be addressed in future studies. Third, dexmedetomidine generally showed a more favorable trend than propofol in maintaining normal body temperature, but there was no statistical difference between the groups. Future studies with large sample sizes may show the benefits of dexmedetomidine over propofol.

In conclusion, dexmedetomidine titrated to provide moderate sedation did not differ in terms of thermoregulatory end points, including core temperature at the end of surgery, incidence and severity of perioperative hypothermia, thermal comfort, and shivering severity, compared to propofol used to achieve a similar level of sedation in patients undergoing orthopedic lower limb surgery under spinal anesthesia. Therefore, in terms of prevention of perioperative hypothermia in patients undergoing surgery under spinal anesthesia with moderate sedation, dexmedetomidine and propofol use are associated with similar outcomes.

All of the listed authors were involved in the drafting of the work, approved the final manuscript, and agreed to be accountable for all aspects of this work.

This author helped writing the manuscript, analyzing and interpretation of data.

These authors helped the acquisition, analysis, and interpretation of data.

This author helped the conception and design of the study, statistical analysis and writing the manuscript.

8. Arain SR, Ebert TJ. The efficacy, side effects, and recovery characteristics of dexmedetomidine versus propofol when used for intraoperative sedation. Anesth Analg. 2002;95(2):461-6