Top
Introduction
1. Neuroanatomy of the breast
2. Criteria for evaluating the...
3. The effect of surgery of...
4. The effect of different...
5. Effect of radiotherapy on...
6. Summary and outlook
Acknowledgements
Abbreviation
References

The altering in sensory sensitivity: a current issue of female breast surgery 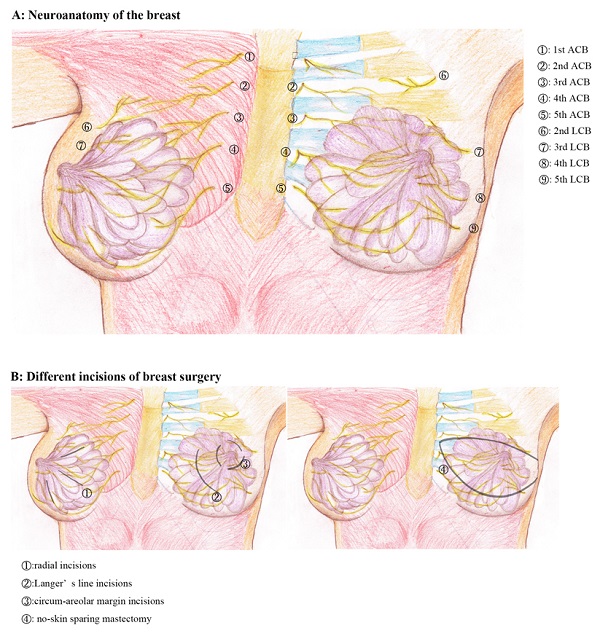 The incidence of breast diseases in women is increasing daily. Among female malignant tumors, breast tumors have the highest incidence and endanger women's health. Surgery is the main treatment for breast disease. Meanwhile, with the advances in medical treatment of tumors, the postoperative survival time of malignant breast tumors has improved, and the 5-year survival rate is up to 90% [1]. This survival prolongation has led to an increase in the requirements to maintain the patients' quality of life postoperatively. Apart from protection of the breasts' beautiful appearance, an increasing number of women pay attention to the physiological function of the breast during the treatment of benign and malignant breast diseases. The sensitivity of the breast skin is fundamental to the physiological function of the breast, not only to avoid accidents such as burns, but also to give women a “real” breast sensation. However, different breast surgeries have different effects on breast sensation, and the recovery of breast sensation after surgery varies. In this review, we aim to discuss the research progress on recovery of breast skin sensitivity after different treatment modalities for breast disease.

1. Neuroanatomy of the breast

2. Criteria for evaluating the neurologic function of the breast

The evaluation and testing criteria for breast nerve function are divided into subjective or objective. Subjective evaluation is based on patients' self-evaluations after breast surgery. Generally, the BREAST-Q scale is used in clinical settings and may be adjusted [10, 11]. Objective physical stimulation tests are used for the objective sensory evaluation system; these tests are based on the patients' responses. For example, the acupuncture is used to measure pain sensitivity, the cotton is used to measure the sensitivity of touch and pressure, heat and cold are used to measure temperature sensitivity, and the tuning fork is used to measure vibration sensitivity. Common objective sensory evaluation methods include the Semmes-Weinstein monofilament examination and von Frey test for quantifying the skin pressure threshold [12], probabilistic species sensitivity distribution (PSSD) method for continuously measuring pressure sensitivity in the skin using a computerized system; the less commonly methods, such as Weber static two-point discrimination test, Dellon dynamic two-point discrimination test [13-15]. Relevant studies that used common objective measures as well as subjective measures are organized in Table 1.

3. The effect of surgery of different benign breast diseases on breast skin sensitivity

Benign breast tumors are the commonest breast diseases in women, especially young ones. Surgery is the main treatment [63]. Currently, radial incisions, Langer's line incisions, circum-areolar margin incisions and intra-areolar incisions are surgical incisions used during benign breast tumor surgeries. When choosing incisions, clinicians mainly consider whether the tumor can be removed easily and completely, the incision is concealed, and the incision ensures esthetics after healing. However, little consideration is given to sensitivity loss after local skin injury as it is of less concern to some young women. This suggests that attention should be paid not only to the above factors, but also to the orientation of the cutaneous sensory nerves at the incision site of the breast. Furthermore, sensory abnormalities of the breast skin should be minimized by avoiding nerve damage. A researcher compared the areolar edge incision with the intra-areolar incision used for breast fibroadenoma resection. They observed that patients who chose the intra-areolar incision had a good sensory recovery of the areolar skin [64]. Other studies have shown that the medial incision of the areola has a significantly lower impact on the nerves than the lower incision of the areola [65]. Several researchers had controversial findings: they observed that even with a circum-areolar incision at the 4 o'clock position of the left breast or the 8 o'clock position of the right breast, which is most likely to favor an injury of the lateral cutaneous branch of the 4th intercostal nerve, there was no significant difference in the recovery time of the nipple and areola when compared with other incisions. The location and length of the circumferential incision did not affect the recovery time of the nipple and areola [66].

3.2 Effect of breast reduction and plasty on breast skin sensitivity

Breast reduction surgery can relieve the pain of patients with breast hypertrophy. It can also be used for patients with breast cancer undergoing breast symmetry surgery. Breast-conserving surgery may be used in the middle of breast reduction surgery for some patients with chronic mastitis and breast cancer. The sensitivity of the nipple areola and breast skin decreases within 3 months postoperatively, but the tactile sensitivity of the breast is similar to that 1 year before the surgery [67, 68]. Sensitivity returns faster in the nipple than in the areola, and faster in the upper quadrant faster than in the lower quadrant [69]. Sensitivity to touch returns 2 weeks postoperatively and continues to increase within 1 year. Moreover, nipple erection is not affected [70]. Using the nipple-free vertical technique, some researchers observed that breast skin sensitivity changed a little after surgery and recovered earlier. Compared with the sensitivity after use of the lower pedicle technique [71], sensitivity decreased significantly. Other studies have shown that in patients with a modified double-loop reduction of large breasts, the sensory recovery of the nipple areola was good, and the lactation function was retained [72]. In addition, the volume of excised tissue is also an important factor for skin sensory function. Most scholars believe that there is a positive correlation of amount of excised tissue with the number of severed nerves and risk of papillary and areolar sensory injury [73].

Breast augmentation is performed by the implantation or self-fat tissue. It helps to increase breast volume and improve women's body shape. It is good procedure for women with the poor development of breast. Implantation is the most common method. Studies have shown that skin sensitivity in the breasts after implants is lost for a short period, but it returns to its pre-operative state approximately 12 weeks postoperatively. The area of decreased sensitivity after implantation is directly related to the surgical approach. The sensitivity of the lower outer quadrant of the breast decreases with the use of a submammary incision[6], and the sensitivity of the nipple-areola complex decreases significantly with the use of a periareolar incision [6, 74]. The larger the implant size, the less sensitive the nipple-areola complex [75].

Modified radical mastectomy is one of the most widely used surgical methods for breast cancer because of the total removal of breast tissue and glands, absence of the breast skin, and complete loss of breast sensitivity. After no-skin sparing mastectomy, breast sensitivity, including sexual sensitivity is almost completely lost. Importantly, the ability of the breast skin to protect sexual sensitivity is lost, and patients can not feel the stimulation of skin lesions in the primary breast area, which greatly affects their quality of life postoperatively [6, 21, 76].

4.2 Effect of nipple and areola-sparing surgery on breast skin sensitivity

Nipple and areola‐sparing mastectomy (NSM) are the basis of breast reconstruction for breast cancer. The breast skin is well-preserved, which provides the basic condition for the recovery of the breast nerve function. The selection of the incision position is the main factor for postoperative sensory recovery after NSM. The objective sensitivity of the nipple and areola decreases significantly after surgery with the use of areolar and sub-mammary incisions; it is possibly due to the destruction of the cutaneous branch of the 4th intercostal nerve [77, 78]. In addition, a small and short incision during NSM to protect the breast innervation system contributes to postoperative breast sensitivity, and these patients with breast cancer can regain papillary erection 6-12 months postoperatively [44]. Other studies have shown that using an endoscopic surgery for breast cancer with sparing the nipple and areola avoids incisions around the nipple and areola complex, which greatly reduces the likelihood of sensory impairment of the nipple and areola complex. Compared to patients who undergo NSM, there is a significant reduction or impairment in pressure, temperature, and vibration perception in patients who undergo endoscopic surgery [79].

Breast reconstruction with breast autografts gives a natural feeling, is long-lasting, and patient satisfaction is high. Currently, the most used autologous tissue flaps for breast reconstruction are deep inferior epigastric perforator (DIEP), the latissimus dorsi (LD) flap and transverse rectus abdominis muscle (TRAM) flap. Breast skin sensitivity is best after the use of DIEP, followed by LD and TRAM [33]. Table 2 summarizes some studies that compared results with and without nerve grafts.

The DIEP flap is the gold standard for autologous breast reconstruction because of its good shaping ability and minimal donor site damage. The DIEP flap is constituted of the abdominal wall skin and subcutaneous fat flap. The neurotized flap contains sensory nerves. Even without nerve, approximately 70% of patients show signs of reinnervation after reconstruction. The degree of skin sensitivity recovery 6-12 months postoperatively and the recovery time are proportional to the degree of recovery [22, 53, 82, 83]. Most scholars believe that the sensitivity of the lower part of the breast recovers better than that of the nipple area and upper part of the breast, and that tactile sensitivity recovers better than other sensitivities. Regarding DIEP reconstruction with nerve anastomosis, breast sensitivity is recovered early and good, and 30% of patients have sexual sensitivity after DIEP reconstruction, which greatly improves their quality of life and satisfaction [17, 29, 84].

4.3.3 Effects of immediate and delayed reconstruction on breast skin sensitivity

Radiotherapy plays an important role in the comprehensive treatment of breast cancer. For high-risk breast cancer patients with positive lymph nodes, whether they choose mastectomy or breast reconstruction, postoperative adjuvant radiotherapy not only improves local control of the tumor, but also benefits long-term survival [90]. However, radiotherapy can cause numerous adverse effects such as skin irritation, radiation dermatitis, and chest wall tenderness. Almost all (99.8%) nipple-areola preserving mastectomies (NSM) have side effects after radiotherapy, with skin irritation and thickening and chest wall tenderness being the most common; about 94.3% of mastectomy patients (CM) experience complications such as loss or alteration of nipple or breast sensation and chest wall tenderness, but rarely do they experience persistent pain for longer than 6 months[91]. Moreover, pain associated with breast radiotherapy generally peaks 1 week after the completion of radiotherapy [92]. Moreover, with irradiation, non-neurotized DIEP flap skin had better sensation recovery than did skin over implants. However, without irradiation, skin overlying implants is associated with better sensation recovery than non-neurotized DIEP flap skin [62]. Another study further verified that intraoperative radiotherapy does not have a greater improvement in the occurrence of pain compared to external breast radiotherapy [93]. In conclusion, radiotherapy can cause many adverse effects, the most severe of which is pain in terms of skin sensation.

The breast is a key organ for women, and the recovery of breast sensitivity after breast surgery is of growing interest. This has led to increasing research in the protection of breast skin sensitivity, breast neuroanatomy, and the characteristics of different treatment modalities for breast disease. Currently, there is no unified system for evaluating all breast sensitivity functions after breast surgery. The recovery of breast skin sensation varies with different treatment modalities for breast disease and is influenced by the choice of surgical incision, extent of excision, surgical procedure, etc. The mechanisms of sensory self-repair and nerve regeneration in the breast skin after breast surgery are unclear. Nerve anastomosis in breast reconstruction can effectively improve breast skin sensitivity, but the methods of nerve reconstruction still require further research. With the development of medical technology, it is anticipated that women with breast diseases can be provided the “perfect” breasts, which have both esthetics and good functions.

This research was supported by Natural Science Foundation of Liaoning Province (2020-MS-178).

74. Sensitivity of the nipple-areola complex and areolar pain following aesthetic breast augmentation in a retrospective series of 1200 patients. periareolar versus submammary incision - PubMed. Available at https://pubmed.ncbi.nlm.nih.gov/21921773/.