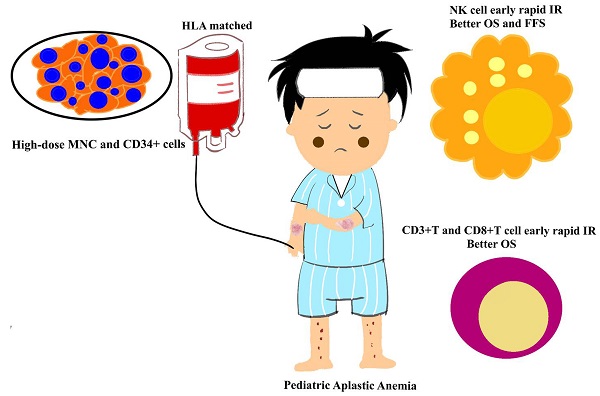 Background: Previous studies had revealed that immune reconstitution (IR) after allogeneic hematopoietic stem-cell transplantation (allo-HSCT) affected the clinical prognosis of patients. However, few studies were based on pediatric patients and patients with aplastic anemia (AA). The purpose of this research was to analyze IR of pediatric AA after HSCT and further explore its clinical prognostic value.

Conclusion: Early rapid IR after HSCT is a good predictor of clinical prognosis in children with AA. This study provides a reasonable prediction for early rapid IR, which may improve clinical outcomes of children.

For aplastic anemia (AA), especially severe AA (SAA), allogeneic hematopoietic stem-cell transplantation (allo-HSCT) is a potentially curative therapy to save the life of patients by reconstituting hematopoietic and immunologic systems. However, allo-HSCT is accompanied by certain risks, such as infection, acute and chronic graft-versus-host disease (GVHD). Several studies had shown that the rapidity and degree of immune reconstitution (IR) were closely related to the occurrence, development and outcome of transplantation complications, and ultimately affected the overall survival (OS) [1, 2].

We retrospectively analyzed the clinical data of 61 AA children who underwent HSCT in Beijing Children's Hospital from February 2008 to October 2020. The diagnosis and typing of AA would have to be based on international standardization of guidelines for the diagnosis and treatment [4]. All results of the chromosome breakage assay were negative. No dyskeratosis congenital was included. Patients with clonal evolution were excluded from this study. Signed informed consent forms were obtained from all guardians of children, the diagnosis and treatment plans were also approved by the Ethics Committee of Beijing Children's hospital. These patients were aged at 1 year 2 months to 16 years 9 months with a median age of 7 years 6 months (90 months). Of these patients, 29 were boys, 32 were girls. There were 21 cases of matched related donor HSCT (MRD-HSCT), 10 cases of matched unrelated donor HSCT (MUD-HSCT), and 30 cases of haploidentical HSCT (Haplo-HSCT). Most patients had received multiple infusions of blood products and 7 children had been treated with anti-thymocyte globulin (ATG). The general clinical characteristics are shown in Table 1.

The basic regimen of 50 mg/kg/d cyclophosphamide (Cy) and 3 mg/kg ATG or Cy and 5 mg/kg antilymphocyte globulin (ALG) was used to treat 9 patients at -5 to -2 days before transplantation (CA). Besides the basic regimen, 36 patients were also treated with 25 mg/m2/d fludarabine (Flu) at -6 to -2 days to enhance the immunosuppressive effect (FCA). Based on the FCA conditioning regimen, 6 patients were given 3 Gy TBI (TBI+FCA) and 9 patients were added with 0.8 mg/kg busulfan (Bu) every 6 hours at -7 and -6 days (Bu+FCA) to eliminate the residual hematopoiesis. There was 1 patient with chromosomal abnormalities, who was treated with 2 g/m2 arabinoside (Ara-C) every 12 hours at -6 and -5 days (Ara-C+FCA).

To mobilize donor stem cells, we used 5~10 μg/kg of granulocyte colony-stimulating factor (G-CSF) continuously for 5 days. Donor bone marrow (BM) was collected on day 4 and peripheral blood stem cells (PBSC) on day 5. If neither the total number of mononuclear cells (MNC) nor the number of CD34+ cells was meeting the standard of transplantation on day 5, the collection was repeated on day 6. Red blood cells were removed using hydroxyethyl starch if the donor and recipient had incompatible major ABO blood types, and plasma was removed using density gradient centrifugation if the donor and recipient had incompatible minor ABO blood types.

Acute and chronic GVHD were evaluated by modified Glucksberg grading system [5] and Chinese consensus on the diagnosis and management of chronic graft-versus-host disease (2021) [6] respectively. The basic GVHD prophylaxis regimens consist of cyclosporin A (CsA) or CsA+short-term methotrexate (stMTX) or CsA+stMTX+mycophenolate mofetil (MMF). We treated 15 cases of MRD and 2 cases of Haplo with CsA only. We used CsA+stMTX to prevent GVHD in 6 cases of MRD, 1 case of MUD and 9 cases of Haplo. We treated 9 cases of MUD and 19 cases of Haplo with CsA+stMTX+MMF to enhance inhibition of T and B cell proliferation. Patients who developed Ⅱ~Ⅳ° aGVHD received methylprednisolone (a total of 1~2 mg/kg) or anti-CD25 monoclonal antibody. If patients had stable donor chimerism and no obvious GVHD, CsA and MMF were tapered during 6 months. After HSCT, 24 children received mesenchymal stem cells (MSCs) infusion to prevent GVHD.

The recovery of immunoglobulin also had its characteristics. The concentrations of IgE (Figure 1G), IgG (Figure 1H) and IgM (Figure 1I) showed a certain degree of fluctuation, while, within the normal range. In contrast, the concentration of IgA (Figure 1J) kept a low level in the first 12 months and returned to normal in the 2nd year after HSCT.

IR after HSCT is a complex step-by-step process. The recovery of immune cells and the reconstitution of immune system have a close relationship with the patient's post-transplantation complications, such as infection and GVHD, finally affecting the patient's outcome [1, 2]. In this study, we retrospectively analyzed the IR of 61 pediatric patients with AA at different time points after transplantation. 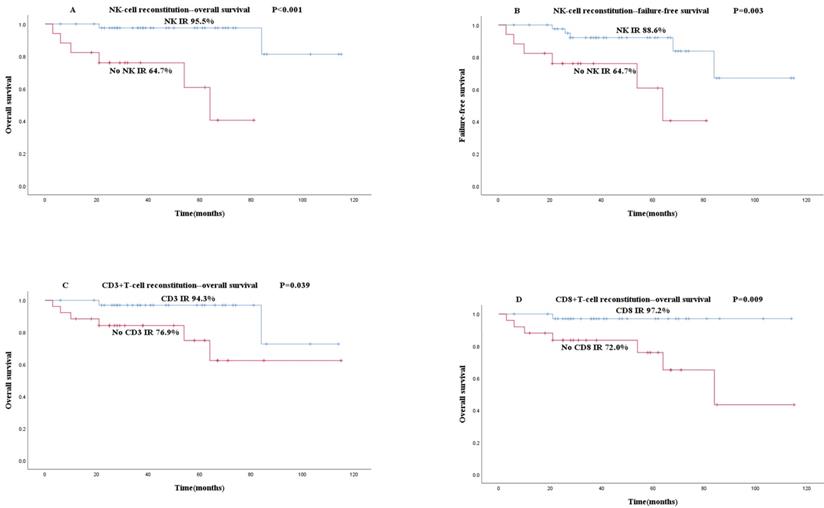 Our results indicated that innate immune CD56+ NK cells, adaptive immune CD3+ T cells and CD19+ B cells were reconstituted sequentially. Among the CD3+ T cell subsets, CD8+ T cells recovered rapidly and reached the normal level in the 2nd month after transplantation, while the lack of CD4+ T cells would exceed 12 months. The CD4+/CD8+ T cell ratio was inverted in the first two years after transplantation, which shared same points with previous AA reports [9-11], and may be closely related to the ATG therapy before transplantation [12]. In the current study, the reconstitution of immune cells was faster in patients with AA than in previous studies of transplant patients excluding AA [7]. However, due to the diversity of graft types, stem cell sources and conditioning regimens in different centers, IR patterns are of individual features to some extent.

Previous researches were focused on the IR of malignant hematological diseases, and few studies were focused on the IR of AA. More importantly, no pediatric data had been reported separately. Next, we tried to analyze the factors affecting early rapid IR and evaluate the predictive value of IR. As we know, thymus is crucial for the reconstitution of T cells [15]. The function of thymus in children is better than that in adults. The study reported that younger recipient age was associated with better reconstitution of B cells owing to a potential role of non-hematopoietic/microenvironmental factors [16]. It is necessary to explore early rapid IR in children with AA. Although the thresholds of early rapid IR used in this study were from the data of malignant hematological diseases [7], we found that they were also reasonable in patients with AA.

In the process of IR, different from the thymus-dependent and non-thymus-dependent pathways of T cells, the reconstitution of B cells usually comes from the differentiation of donor HPC from native to mature [23]. GVHD is predominantly mediated by alloreactive donor T cells, but it is associated with significantly poorer B cell reconstitution in both function and number [24]. Studies had showed that B cell reconstitution was delayed in patients who underwent aGVHD with donor T cell infiltration and destruction of bone marrow [25, 26]. The risk factor of GVHD is the degree of HLA compatibility [14]. However, in our univariate analysis, the occurrence of aGVHD was found to affect the early rapid IR of CD19+ B cells, but in multivariate analysis, it was HLA-matched that significantly affected the early rapid IR of CD19+ B cells. This enables us to predict IR before transplantation without waiting for the occurrence of GVHD, and prevent infection caused by delayed B-cell IR by giving more gamma globulin infusion to HLA-incompatible recipients in advance.

NK cells are the first quantitatively reconstituted population of donor-derived lymphocytes after HSCT, mainly derive from the differentiation and maturation of progenitor cells, and are predominantly immature in the early stage [27]. NK cells play an important role in immune response to viral infection before the recovery of adaptive immunity [28]. Patients with low NK cell counts on days 30 and 90 after HSCT had poorer OS [29]. In the study of children using various hematopoietic stem cell sources, rapid NK IR showed a trend towards decreased mortality [30]. Ando et al. [31] studied the IR of 358 adult patients with hematological malignancies. They found that NK cell was an independent predictor of OS and that patients with rapid NK cell reconstitution on day 100 after transplantation had relatively better OS and DFS. NK cells served as the major circulating lymphocytes in the first 3 months after transplantation. Rapid and stable “mature” NK cell reconstitution will lead to better transplant outcomes [32]. In our study, we focused on pediatric patients with AA rather than malignant hematological diseases and found that both OS and FFS in CD56+ NK cell early rapid IR group were higher than those in non-IR group. Our results provided preliminary confirmation that the predictive value of early rapid IR of NK cells was also applicable to benign hematologic diseases. The reconstituted NK cells have functional defects for more than 6 months after transplantation [33]. It is essential to improve the patients' immunity to viral infection and thus improve the patients' OS and FFS.

A study by van Roessel et al. [36] included 315 transplant patients and found that early CD4+ T cell IR was an independent predictor of OS, EFS and NRM, and that patients with CD4+ T cell IR had higher OS than the non-IR group. Kim et al. [7] studied 69 transplant patients and found that the 2-year OS rate of patients with absolute CD4+ T cell count >200/uL in the 3rd month after transplantation was better than that of patients with absolute count <200/uL. Chang et al. [37] studied patients with hematological diseases after Haplo-HSCT and found no association between CD4+ T cells on day 30 or 90 and survival. No positive results in our study were obtained in the prognostic impact of CD4+ T cell IR. We do not think this should be because our definition and assessment of CD4+ T cell early rapid IR are different, considering that it may be different because our patient population is children with AA. Apparently, only 26.2% of children recovered more than 200/uL in the 3rd month after transplantation, but 74% of patients in Kim's study [7] reached IR under the same standard. It may be that our underestimation of CD4+ T cell IR biased the conclusions.

Compared with other studies, we demonstrated the IR of AA in children after allo-HSCT and its clinical prognostic value. The main limitation of this study is the small sample size of AA children and further studies with larger sample size are necessary to verify. The time points and thresholds to evaluate whether immune cell subsets can be early rapidly reconstituted vary between studies, so further researches are still needed to draw the final conclusions on the predictive value of IR after HSCT. However, our study and several previous studies had demonstrated that the rapidity and degree of IR after transplantation affected the prognosis of patients. Future researches should also focus on the factors affecting IR and search for strategies that will predict or improve IR to further improve the survival rate of patients and transplant efficacy.

This work was supported by grants from the Beijing Municipal Natural Science Foundation (No.7192065) and Capital Medical University “Undergraduate Research Innovation” project (No.XSKY2021340).