Endometriosis is a common gynecological disease, accounting for an incidence of 10% in women of reproductive age, and up to 50% of infertile women, with the main clinical manifestations being pain and infertility. Endometriomas are one of the most common forms of endometriosis, with a prevalence as high as 17%-44% in patients with endometriosis and approximately 35% in those with benign ovarian tumors [1]. Although the most effective and widely used treatment method is laparoscopic endometrioma cystectomy because of a treatment goal of pain relief, the increased likelihood of spontaneous pregnancy and reduced progression and recurrence of the disease [2-5], this surgical intervention causes loss of follicles thereby affecting ovarian reserve and fertility [6-8]. Therefore, the surgical solution is still a controversial treatment for endometriomas.

There are several tests used to evaluate ovarian reserve. However, until now, anti-Mullerian hormone (AMH) and antral follicle count (AFC) are proposed as the two most valuable, of which AMH is considered more advantageous than AFC. AMH has the earliest predictive value, is independent of the menstrual cycle, and is not affected by oral contraceptives, gonadotrophin-releasing hormone agonists, endometriosis, or a history of ovarian surgery [9, 10]. Therefore, AMH is often the preferred choice to evaluate ovarian reserve after endometrioma cystectomy.

Several studies of the change in ovarian reserve by AMH after laparoscopic endometrioma cystectomy have been published [11-20]. The systematic review and meta-analysis by Raffi F et al. indicated a significant reduction in AMH levels after surgery [11]. However, the studies had small sample sizes, short follow-up times, and unclear related factors, thus more definitive studies are needed to determine the change in longitudinal AMH levels [10]. Recent longer follow-up studies showed different results, some of which observed AMH levels are unchanged six months after surgery [12-15], other studies indicated that AMH could recover one year after surgery [16-20].

The current study aimed to evaluate long-term ovarian reserve change by serum AMH levels to understand whether the decrease of AMH levels is persistent or recovered after surgery and to determine pre- and intra-operatory factors that affect the changes after laparoscopic endometrioma cystectomy.

This prospective study was carried out from 2015-2017 at Hanoi Obstetrics and Gynecology hospital, Hanoi, Vietnam and was approved by the Ethics Committee of the Hospital. Inclusion criteria were as follows: reproductive age 18 to 40 years with regular menstrual cycles, and had unilateral or bilateral endometrial cysts with no suspected malignancy on ultrasound. Exclusion criteria were endometrioma with another ovarian cyst, history of previous ovarian surgery, unconfirmed endometriosis or suspected malignancy on histology, hormone therapy used within three months before surgery, or any endocrine disorder including polycystic ovarian syndrome, hyperprolactinemia, thyroid dysfunction, and Cushing's syndrome.

Eligible women were informed about the study by gynecologists and written informed consent were received from all participants before enrolling in this study. Before surgery, baseline obstetric and medical histories were recorded. Cyst size was measured through transvaginal ultrasound by calculating the average of 2 diameters: a large diameter and a small diameter perpendicular to the large diameter. The mean size of endometriomas was calculated as the size of the total cyst divided by the number of endometriomas. Pain score was assessed by the Numerical Rating Scale (NRS). CA125 levels were measured in all participants by the Cobas E602 Immunology Analyzer (Roche, Basel, Switzerland) based on the electro-chemiluminescence immunoassay.

The surgical technique was stripping technique with the main procedure consisting of scissors or unipolar coagulation to open the capsule. The endometrioma was removed from the normal ovarian tissue attempting to avoid rupture. Hemostasis of normal ovarian tissue was controlled by bipolar coagulation using water to find bleeding points and stop them. The operation duration was calculated from when the surgeon started to fully insert the laparoscopic instruments into the abdomen to when the trocars began to be withdrawn. The revised American Society for Reproductive Medicine (rASRM) classification was used to determine the score and endometriosis stage [21]. All resected specimens were diagnosed by histology.

Immediately after surgery, a 3-month course of Gonadotrophin-releasing hormone agonists (GnRHa) or a 6-month course of combined oral contraceptives (COCs) were administered to 10 and 37 patients, respectively. The selection of patients was based on the grade of endometriosis and the desire for pregnancy. No medications were used in 57 patients for postoperation medical treatment. Serum AMH levels were measured at 1, 3, 6, and 12 months after surgery. No pregnancy was recorded within the first 6 months. Nineteen (n=19) patients conceived spontaneously from 6 to 12 months who were without measured serum AMH levels at 12 months.

Quantitative variables were tested for normal distribution by Skewness and Kurtosis tests. With non-normally distributed variables, mediant and interquartile ranges were used in descriptive statistics. The Mann-Whitney test was applied to compare the groups. The Wilcoxon signed-rank paired test was used to determine the differences in serum AMH levels between each sampling point and the rate of decrease in the AMH levels. The relationship between two quantitative variables was established by Spearman's test. Multivariant linear regression analysis was used to explore the factors affecting post-operative AMH levels. The Stata (version 14.0) software was for analysis. Statistical significance was set to a P-value of <0.05.

Baseline characteristics of the study subjects

The secondary outcome of the study was to determine the factors that may affect the changes after laparoscopic endometrioma cystectomy. Several factors were associated with AMH levels postoperatively. Those factors included age, pain score, laterality, size of the cyst, pre-operative AMH level, duration of operation, score, and stage of endometriosis (Table 3). Multivariant linear regression analysis showed that only three factors were associated with AMH levels, those being bilateral endometriomas, endometrioma size, and pre-operative AMH level (Table 4). In addition, this study recorded 19 patients with spontaneous pregnancy within 6 to 12 months postoperative, of which 14 patients were infertility (29.2% infertility patients) and five patients desired to have more baby.

Serum AMH levels in patients with unilateral and bilateral endometriomas

Pre-operative AMH level cut-off to predict diminished ovarian reserve after surgery. The cut-off values of AMH levels before surgery to predict diminished ovarian reserve (DOR) 1 month (A), 3 months (B), 6 months (C) and 12 months (D) after surgery in patients with unilateral endometriomas. Cut-off values, sensitivity, specificity, area under the curve (AUC) and 95%CI are presented on the figures. 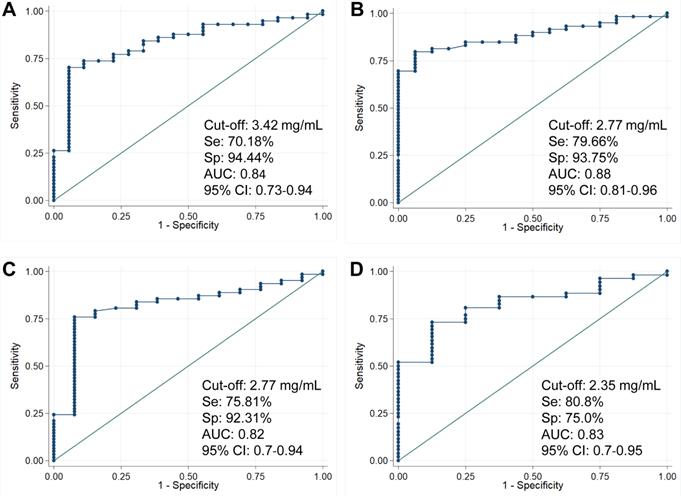 Laparoscopic endometrioma cystectomy is a recommended and widely used method because it meets the treatment goals of endometriosis, which is to reduce pain, increase the chance of spontaneous pregnancy, and reduce disease progression and recurrence [2-5]. However, haemostasis of the cyst bed during surgery can cause follicle loss, which can affect ovarian reserve. Thus, coagulation should be kept to a minimum, especially for patients with reproductive goals [2-5]. A significant decrease in serum AMH levels after laparoscopic endometrioma cystectomy has been documented [12, 14, 16-19]. A systematic review and meta-analysis study showed that the median AMH level before surgery was 3.1 ng/mL and significantly decreased to 1.51 ng/mL within one to nine months postoperative [11]. Some studies with 30 patients (six-month follow-up) [23] and with 25 patients (three-month follow-up) [24] showed no difference in serum AMH levels between pre and post-operation. Our study with 104 patients showed that preoperative AMH levels significantly declined from 1, 3, 6, and 12 months postoperatively, respectively. The decrease in serum AMH levels was higher in the bilateral endometriomas group compared with the unilateral endometrioma group. These results were similar to those found in a systematic review and meta-analysis [25]. Serum AMH levels were persistent or recovered after surgery, and long-term ovarian reserve changes by serum AMH levels were evaluated. The time point and duration of follow-up was different amongst studies. Most of the studies involved follow-up to six months after surgery [12, 13, 23] while Alborzi S et al. followed up at 9 months after surgery [14]. To the best of our knowledge, our present study is one of the longest follow-up studies with a duration of 12 months after surgery [16-19, 26].

Our result indicated that preoperative AMH levels could be a biomarker to predict diminished ovarian reserve (DOR) after surgery. Based on Bologna criteria [22], women with a diagnosis of poor ovarian response after laparoscopic cystectomy endometriomas have significantly lower pregnancy and live birth rates compared to those with primary poor response [27]. Therefore, finding out the biomarker such as preoperative AMH levels that could predict diminished ovarian reserve (DOR) after surgery is important to choose appropriate treatments to preserve fertility in infertile patients with ovarian endometriomas. The hypotheses presented to explain the recovery of AMH after surgery have been documented [16, 28]. After surgery, the blood damaged vessels of the ovary will regenerate to nourish the ovary restoring AMH levels. The function of granulosa cells in the remaining follicles is stimulated so that although the number of follicles is reduced, the amount of AMH produced may increase. The remaining follicles can be recovered from "silent follicles" to "active follicles" thus the ovarian reserve is partially restored: laparoscopic surgery with partial burning of ovarian tissue can stimulate follicular differentiation from the surface epithelium or myeloid cells, however, this hypothesis is controversial. In addition, the delay in the recovery of AMH levels might be explained by the approximate 180-day duration of folliculogenesis.

Increasing the chance of spontaneous pregnancy is one of the advantages of laparoscopic endometrioma cystectomy [2-5]. In this study, among 48 patients who did not use any additional fertility treatments within 12 months after surgery, 14 (29.2%) infertile patients reported having spontaneous pregnancy. Also, our data are important for preoperative counselling, regarding individual reproductive plans for women with endometriomas. Although the current study has some advantages such as a larger number of patients, longer follow-up period, and performing multivariate analysis to find predictors of post-operative AMH levels, limitations are remaining. The most important limitation is that the control group was not included. More studies on surgical techniques and hemostasis methods as well as longer follow-up time should be conducted in the laparoscopic endometrioma cystectomy method.

We would like to thank all staffs of the Gynecology Departments of Hanoi Obstetrics and Gynecology Hospital who were on duty during the study, as well as all patients who voluntarily participated in the study.

11. Raffi F, Metwally M, Amer S. The impact of excision of ovarian endometrioma on ovarian reserve: a systematic review and meta-analysis. The Journal of clinical endocrinology and metabolism. 2012;97:3146-54

23. Uncu G, Kasapoglu I, Ozerkan K, Seyhan A, Oral Yilmaztepe A, Ata B. Prospective assessment of the impact of endometriomas and their removal on ovarian reserve and determinants of the rate of decline in ovarian reserve. Human reproduction. 2013;28:2140-5