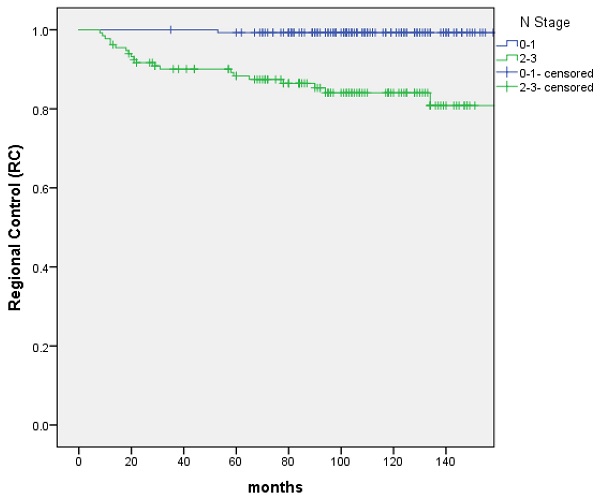 Radiotherapy (RT) is the main definitive therapy for non-metastatic nasopharyngeal carcinoma (NPC) due to its relative high radiosensitivity and anatomic constraints. The 5-year survival rate for stage I-IV NPC after 2-dimensional radiotherapy (2DRT) was 59-75% [1-3]. New radiotherapy technique, intensity-modulated radiotherapy (IMRT) has improved dose delivery to NPC and reduced dose to normal tissues, the 5-year survival rate reached 80-86% with lower toxicities [4-6]. Since little research was reported on long-term outcomes of NPC patients [7-9] and different subgroups have their own characteristics [10-12], a retrospective analysis of 276 patients with T1-2N0-3 NPC has been conducted. Moreover, this study aimed to analyze the long-term outcome and late toxicities to further develop the stratification of T1-2N0-3 disease.

All patients were treated with IMRT. The gross tumor volume (GTV) included primary nasopharyngeal tumor and positive lymph nodes. The clinical target volume (CTV) included the nasopharynx, parapharyngeal space, retropharyngeal lymph node, posterior one‐third of the nasal cavity and maxillary sinus, anterior clivus, pterygoid plates, inferior sphenoid sinus, and drainage of the neck (levels II, III, and Va in patients with N0 stage and levels II‐Vb in patients with N1‐3 stage). The prescribed dose given to primary tumor and the lymph nodes were 66Gy in 30 fractions (PTV-NX: GTV-NX +3-5 mm; PTV-LN: GTV-LN +3-5 mm). The PTV-60 covering the high-risk CTV and a 5-mm margin was prescribed 60Gy/30F. The PTV-54 covering the low-risk CTV and a 5-mm margin was prescribed 54Gy/30F. Radiotherapy was given once daily, 5 fractions per week.

Radiotherapy-related toxicities were graded by to the Radiation Therapy Oncology Group (RTOG). It was assessed every week during the radiotherapy. After treatment completion, follow-ups occurred every 3 months for the first 2 years, every 6 months from the third through the fifth year and annually thereafter. Routine follow-up included medical history, nasopharyngoscopy and physical examination. Enhanced MRI of the nasopharynx was performed every 6 to 12 months. Chest CT and ultrasonography of the abdomen were conducted once yearly. Bone emission CT was performed when there were clinical indications.

The RC rate between patients with N0-1 and N2-3 stage, respectively 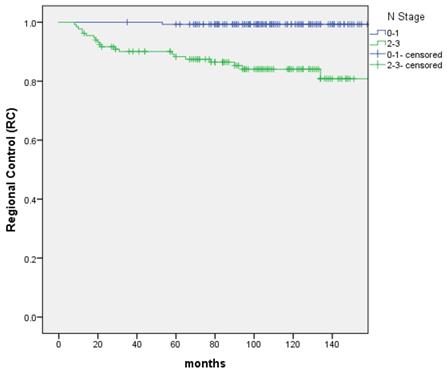 The distant metastasis-free survival (DMFS) between patients with N0-1 and N2-3 stage, respectively 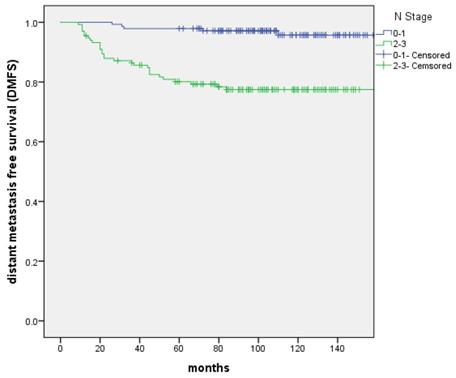 The overall survival (OS) between patients with N0-1 and N2-3 stage, respectively 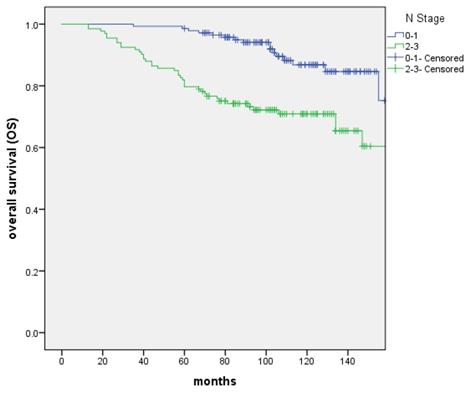 Overall, most late toxicities were assessed as grades 0 to 2. Seven patients had asymptomatic temporal necrosis detected by MRI scans, one of whom was recurrence and re-radiotherapy. Seven patients had cranial nerve palsy, and the possibility of recurrent disease was excluded by a series of MRI scans and physical examination. Single nerve palsy developed in six patients, including four patients with palsy of the hypoglossal nerve and one patient with recurrent laryngeal palsy, abducens nerve, respectively. One patient had two nerve palsies. One case of cranial nerve palsy occurred in the recurrence and after re-radiotherapy. Two patients were pathologically confirmed with osteonecrosis of mandible 8 years after the end of RT and 4 years after the end of re-radiotherapy. Eighteen patients had the second primary tumor, of whom eight were lung cancer, six were head and neck cancer, four were others (Table 4).

In this study, we retrospectively evaluated long-term outcomes and late toxicities of 276 T1-2N0-3M0 NPC, stage based on MRI and treatment with IMRT. We have published local control and acute toxicity in patients with T1-2 NPC. [13] This study was emphasis on long-term efficacy and late toxicity with more cases.

N-stages were part of different clinical stages which were known to be of prognostic value especially as a poor predictor of DMFS. The DMFS for N0-1 was significantly higher than that of N2-3 disease. [22-23] Yao et al. [22] compared clinical features and survival outcomes in patients with ascending type (type A:T3-4N0-1) and descending type (type D:T1-2N2-3) NPC in the IMRT era. Type D had a more aggressive clinical course of distant metastasis, regional recurrence, disease recurrence, and death (P < 0.001 for all) than type A. A retrospective study [23] from Sun Yat-Sen University Cancer Center analyzed 959 patients with N2-3 NPC. All patients received neoadjuvant chemotherapy of ≥3 cycles followed by IMRT. A propensity score matching was made between patients treated with/without concurrent chemotherapy (CCT). The 5-year OS, RFS (recurrence‐free survival) and DMFS for non-CCT and CCT were 77.7%, 87.4%, 78.9% and 73.4%, 86.0% , 73.8% (P=0.083, 0.225 and 0.248), respectively. Although neoadjuvant chemotherapy and CCT were added to IMRT, the distant metastasis was also the most important cause of death. In our study, most N1 stage (the diameter of lymph node ≥3 cm) and N2-3 stage patients received platinum‐based chemotherapy, patients with N0‐1 stage showed improved 5‐year and 10-year DMFS compared with N2-3 patients (97.9% vs. 80.1% and 95.7% vs. 77.5% (P=0.000)).

NPC patients in Stage II of different subgroups have heterogeneity and controversies exist around the management of chemotherapy. [24-28] Huang et al. [24] conducted a Phase 2 multicenter clinical trial in two groups (IMRT alone or CCRT) with stage II (2010 UICC/AJCC) NPC patients. They found that CCT added to IMRT did not improve survival or disease control. Survival outcomes of different groups with T1N1M0, T2N0M0 and T2N1M0 were not further analyzed considering the relatively small sample size. Compared with the results in Huang's research, another retrospective analysis [26] of stage II had different conclusions. 611 patients diagnosed with T1-2N0-1M0 NPC were included. The 5-year OS in the CCRT group was improved compared to RT only (80.5% vs 65.7%; P=0.0021). Multivariable analysis also showed improved survival with the addition of chemotherapy (Hazard ratio [HR] 0.59; 95 CI 0.39-0.89; P = 0.0124). Different subgroups had distinct survival outcomes in Stage II NPC with T1N1M0, T2N0M0 and T2N1M0 stage, respectively. This was a 10-year study, and treatment methods and technologies were constantly changing. The survival outcomes were not as satisfied as Huang's research. Guo et al. [27] found that T2N1 patients had significant poorer survival outcomes than T1N1 patients, with T2N0 patients in between. A total of 117 patients with stage II NPC were included in our study: 81 patients with chemo-radiotherapy and 36 patients with IMRT alone. OS (P=0.280) was not significantly different in the absence of chemotherapy. The role of concomitant chemotherapy cannot yet be exactly determined for the different subgroups of stage II.

Second primary tumor (SPT) is a serious late complication after IMRT for NPC. [29-30] The incidence and risk factors of SPT are poorly characterized. It can occur in-field or out-field anytime after RT and increases with long-term survivors of NPC. SPT is a dreadful complication and negatively impact of OS. It was observed that 290 cases SPT occurred with a crude incidence of 9.2% over a median follow-up period of 10.8 years after IMRT for NPC patients in Chow's study [29]. It mainly included oral cavity, sarcoma, oropharynx, paranasal sinus, salivary gland, thyroid, skin and lung cancer. Additionally, Zhang et al [30] suggested 189 (3.0%) suffered SPT (median follow-up, 62 months) of the 6,377 patients. 14.3% suffered SPMs within 1 year post-IMRT: 1-3 years, 38.1%; 3-5 years, 33.9%; and >5 years, 13.7%. Lung cancer was the most common SPT (50/6,377, 0.78%). In NPC patients, the proportion of lung cancer after IMRT was similar to that of the normal population. Sex, age (≥50) and smoking history were significant risk factors for SPT, and the 5-year OS of NPC with/without SPT were 70.0% and 95.0%, respectively. Eighteen patients in our study had the second primary tumor, of whom eight were lung cancer, six were head and neck cancer, four were others.

Satisfactory locoregional control was achieved in T1‐2 NPC treated with IMRT. Distant metastasis was the main failure cause and N2-3 was the main adverse prognostic factor, which was worthy of further study. Patients with long-term survival should pay more attention to the late toxicities including secondary tumors. Limitations of the study such as retrospective data and single center should be considered in the future research.

This work was supported by the Shanghai Anticancer Association EYAS PROJECT (grant no: SACA-CY20C06).