Roles of the miR-139-5p/CCT5 axis in hepatocellular carcinoma: a bioinformatic analysis

Background: MiRNAs are pivotal regulators involved in proliferation, apoptosis, invasion, metastasis, epithelial-mesenchymal transition (EMT), angiogenesis, drug resistance and autophagy in hepatocellular carcinoma (HCC). The aim of this study was to investigate the influence of miR-139-5p and its target genes on the outcomes of HCC.

Conclusions: MiR-139-5p suppresses HCC tumor aggression and conversely correlated with CCT5. The miR-139-5p/CCT5 axis might perform crucial functions in the development of HCC.

The interference of miR-139-5p could reverse the inhibitory effects of sevoflurane treatment on breast cancer cell migration, invasion, and EMT [25], and reverse the EMT of colon cancer stem cells [26]. The miR-139-5p impeded the EMT in pancreatic cells[27], cervical cancer cells [28], glioma [13], osteosarcoma [19], colorectal cancer cells [29], and in post-menopausal women with interstitial cystitis [30]. In HCC, miR-139-5p functions to inhibit EMT and metastasis by targeting zinc finger E‑box binding to homeobox 1 (ZEB1) and ZEB2, and its expression is downregulated in HCC cells and tumor tissues [31, 32]. MiR-139-5p inhibited HCC cell viability, migration and invasion and induced apoptosis by targeting kazal‐like domains proteoglycan 1 (SPOCK1), E26 transformation-specific 1 (ETS1) and NTRK like family member 4 (SLITRK4) [32-34]. Given the controversial role of miR-139-5p in human malignancies and the importance of identifying target genes of miR-139-5p in HCC, we conducted an integrated bioinformatic analysis to investigate the roles and target genes of miR-139-5p in HCC patients.

Survival analysis of miR-139-5p and its potential target genes was conducted in the Kaplan Meier plotter platform [35, 36]. This database is processed by a PostgreSQL server, which integrates both gene expression and clinical data. To analyze the prognostic value of a particular gene, patient samples were divided into two groups by the proposed median cutoff of the biomarkers. Two patient groups were compared by Kaplan-Meier survival plot and the hazard ratio (HR) with 95% confidence intervals (CI) and log rank P value were calculated. When the miRNA ID hsa-miR-139-5p and non-commercial spotted platform were selected, 166 HCC patients were included in the analysis. Outcomes including overall survival (OS) and disease-free survival (DFS) were considered. No sex, tumor stage, cirrhosis status, metastasis, HBV infection, alcohol use or race restrictions.

Total RNA from 14 pairs of HCC tumors and adjacent tissues was isolated and purified in the GSE84402 dataset [22] for expression analysis of target genes of miR-139-5p. The GSE14520 dataset [37, 38] was used to validate relationships between miR-139-5p target genes and the survival and clinico-pathological characteristics of HCC patients. Data extraction methods used for the GSE14520 dataset have been described previously [39, 40].

TaKaRa MiniBEST Universal RNA Extraction Kit (TaKaRa, Japan) was applied to extract the total RNA from samples according to the manufacture's recommendation. The reverse transcription of 500 ng total RNA was utilizing PrimeScript™ RT reagent Kit (TaKaRa, Japan) and quantitative real-time PCR with TB Green® Premix Ex Taq™ II (TaKaRa, Japan). The PCR was set at the initial denaturation of 2 min at 95 °C, following with 5 s at 95 °C, and 30 s at 60 °C in a total of 40 cycles, and was set at melt curve stage of 15 s at 95 °C, 1 min at 60 °C and 15s at 95 °C. All experiments were carried out in triplicate. The miR-139-5p expression was normalized to U6. The relative expression ratios of miR-139-5p were computed by the 2-ΔΔCT method. The primers involved in this assay were shown as follows: hsa-miR-139-5p, F: ACACTCCAGCTGGGTCTACAGTGCACGTG, R: GTGCAGGGTCCGAGGT; U6, F: AGAGAAGATTAGCATGGCCCCTG, R: ATCCAGTGCAGGGTCCGAGG.

The TargetScan v7.2 [42], miRTarBase [43, 44] and starBase v3.0 [45, 46] databases were used for miR-139-5p target gene prediction. In both the TargetScan v7.2 and miRTarBase databases, human species were selected, and miR-139-5p was entered into the microRNA name dialog box. In the starBase database, the miRNA-target intersections function was used, and the following criteria were selected: human genome, hg19 assembly, miR-139-5p, CLIP-data ≥ 1, degradome-data ≥ 0, and program number ≥ 1. Common target genes of miR-139-5p in these three databases were calculated and drawn by the Venn diagram webtool (http://bioinformatics.psb.ugent.be/webtools/Venn/). The expression levels between tumor and nontumor tissues, including gene expression in peripheral blood mononuclear cells (PBMCs) between healthy individuals and HCC patients, were validated in the Gene Expression Omnibus (GEO) series with Raw.CEL files. Gene expression was calculated with the Affy [47] and Limma [48] packages in the R program. We have previously reported the detailed microarray processing approaches of gene expression in these GEO series [39]. 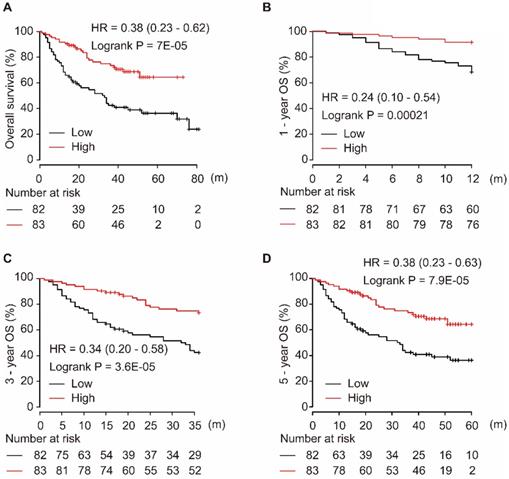 The intersection of target genes of miR-139-5p and differentially expressed genes (DEGs) in the GSE84402 dataset from the GEO database was identified with the Venn diagram webtool (http://bioinformatics.psb.ugent.be/webtools/Venn/). Protein-protein-interaction analysis of miR-139-5p target genes of Homo sapiens organism was performed with the STRING v11.0 database (https://string-db.org/). Full network interacted proteins with interaction score more than 0.4 were selected.

A Cox proportional hazard regression model was established based on The Cancer Genome Atlas (TCGA) database using the R program. The edgeR package [49] was used to identify DEGs in HCC tumor and adjacent tissues, the survival package [50] was used to conduct univariate and multivariate Cox regression analyses, and then the Cox regression formula was calculated. According to this formula, HCC patients were divided into two groups, the high- and low-risk groups [51]. Survival analysis between these two groups was also performed by the survival package [50]. The timeROC package was used to generate a receiver operating characteristic (ROC) curve of the model for the prediction of OS in HCC patients.

GraphPad Prism v7.0 (GraphPad Software, CA, US) was used. Student's t test or the Mann-Whitney U test were performed to analyze the differences in gene expression the two groups. Kaplan-Meier survival analysis was performed on the GSE14520 dataset. A two-tailed P < 0.05 was considered significant.

Association between miR-139-5p and HCC survival 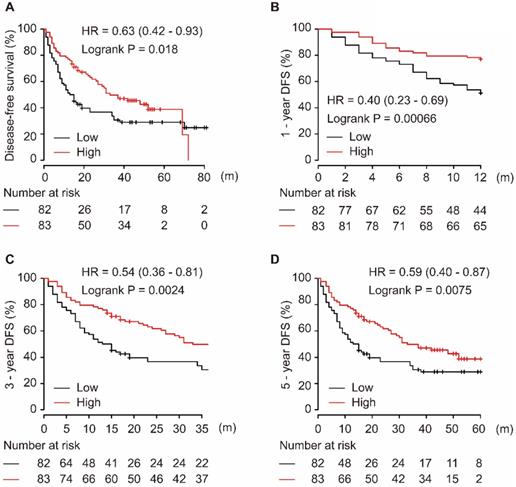 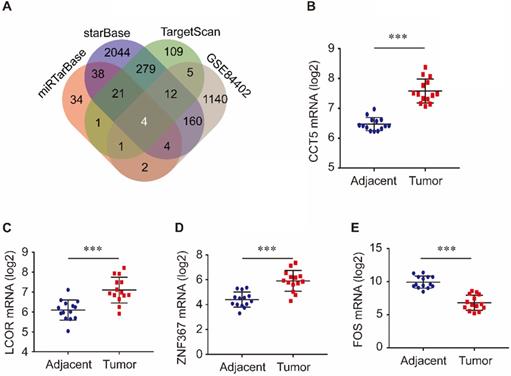 Association between CCT5 and overall survival in HCC

Correlation between miR-139-5p and CCT5 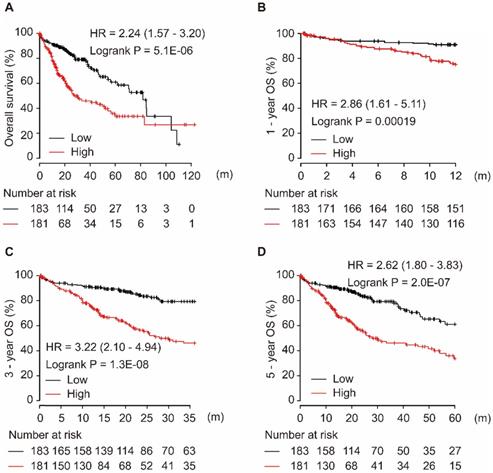 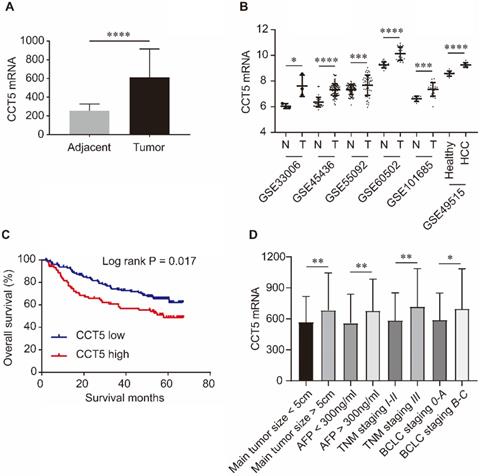 In the STRING database, 10 genes, namely, CCT7, RGS7, CCT6A, CCT4, GNB1, CCT3, TCP1, CCT2, CCT8, and GNB5, have interacted with CCT5 (Figure 7A). Univariate and multivariate Cox regression analyses in R program identified 7 genes, namely, CCT7, GNB5, CCT4, GNB1, CCT5, RGS7, and CCT3. CCT5, GNB1, and RGS7 were significantly associated with OS in HCC patients (all P < 0.05, Figure 7B), with the following formula: y = 0.52 × CCT5 + 0.38×GNB1 + 0.16 × RGS7 (Figure 7B). According to values obtained with the formula, HCC patients were divided into high-risk and low-risk groups in the TCGA and the GSE14520 datasets. As shown in Figure 7, HCC patients with high risk had poor OS compared with those of low-risk patients in the TCGA dataset (P < 0.001, Figure 7C), while no difference between this formula model and OS in HCC patients was found in the GSE14520 dataset (P = 0.239, Figure 7D). To determine the accuracy of this model for the prediction of the OS in HCC patients, the ROC curves with an area under the curve (AUC) in the TCGA and GSE14520 datasets were summarized in Figure 7E and Figure 7F, respectively.

Consistent with previous reports [32-34], our results revealed that the downregulation of miR-139-5p showed a significant association with worse survival in HCC patients. According to existing publications, miR-139-5p inhibits HCC progression by targeting several genes, such as ZEB1 and ZEB2 [31], EZH2 [52], SPOCK1 [32], ETS1 [33], XIST [53] and SLITRK4 [34]. MiR-139-5p was confirmed to negatively regulate ZEB1 and ZEB2 expression [31], which induces EMT and promotes the progression of malignant carcinoma [54], while overexpression of ZEB1 and ZEB2 abolishes the inhibitory effects of miR-139-5p on HCC cell migration and invasion [31]. A previous report revealed that the zeste homolog 2 (EZH2) enhancer could promote HCC motility in vitro and pulmonary metastasis in a nude mouse model through epigenetically suppressing miR-139-5p by potent and extensive regulation of various signaling pathways involved in cell motility and metastasis [52]. As an oncogene, SPOCK1 blocks apoptosis and promotes HCC metastasis [55]. Overexpression of miR-139-5p suppressed HCC cell viability and invasion by targeting SPOCK1, promoted apoptosis, and inhibited tumor growth [32]. A study by Hua et al. showed that miR-139-5p-induced aerobic glycolysis, proliferation, migration, and invasion were reversed by ETS1 overexpression, whereas ETS1 silencing induced the expression of miR-139-5p through posttranscriptional regulation [33]. LncRNA X inactivate-specific transcript (XIST) induces the proliferation of HCC cells by promoting the cell cycle and protecting cells from apoptosis, and the mutual inhibitory action of XIST and miR-139-5p has also been investigated [53]. Recently, SLITRK4 has been shown to be involved in the progression of HCC and to be targeted by miR-139-5p [34]. 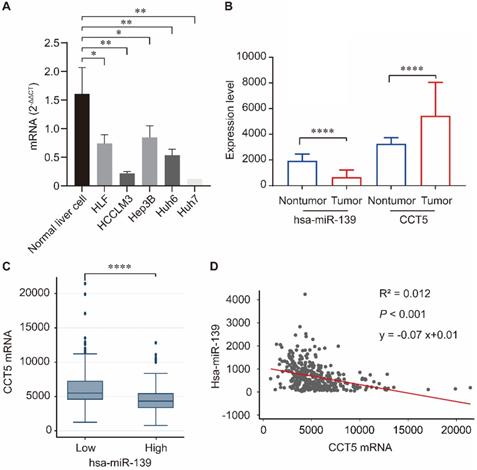 In addition to the target genes mentioned above, our analysis revealed that chaperonin-containing TCP1 subunit 5 (CCT5) might be a novel target gene of miR-139-5p linked to HCC survival and clinico-pathological features. CCT5 is a member of the chaperonin-containing TCP1 complex (CCT), also known as the TCP1 ring complex (TRiC). Its protein-folding activity is critical for cellular health. Misfolded proteins are associated with many human diseases, including cancer, making them potential therapeutic targets [56, 57]. Highly expressed in cancer cell lines, CCT/TRiC is implicated in the folding of oncoproteins cyclin E, cyclin B, and p21(ras), which strongly indicates that it is involved in cell proliferation and tumorigenesis [58]. CCT5 has mainly been investigated in neuropathology [59, 60]. In HCC, CCT5 expression was upregulated in liver tumors, predicted shortened OS and DFS times. Gene enrichment analysis revealed that CCT5 was involved in the dysregulation of Myc target genes, hypoxia-inducible factor (HIF) target genes and the cell cycle, especially the G1/S transition, cell cycle arrest and apoptosis [61, 62]. Additionally, CCT5 mutations might be associated with the accumulation of cytotoxic protein aggregates with tissue destruction and mitochondrial damage [63]. In breast cancer, overexpression of CCT5 correlated with tumor purity and immune infiltration levels and was associated with poor survival rates [64]. CCT5 mRNA was significantly upregulated in p53-mutated tumors and associated with a low response rate to docetaxel in breast cancer. Treatment of MCF-7 cells with CCT5-specific siRNA resulted in a significant enhancement of apoptosis induced by docetaxel [65]. In non-small cell lung cancer (NSCLC), CCT5 was expressed at higher levels in tumor tissues and induced an autoantibody response in NSCLC sera [66]. In addition, CCT5 was also overexpressed in sinonasal adenocarcinoma [67], esophageal squamous cell carcinoma [68] and multidrug-resistant gastric carcinoma cells [69]. We suggest mechanistic insights into the role of CCT5 in tumorigenesis and tumor progression in the HCC population that should be considered in the future. 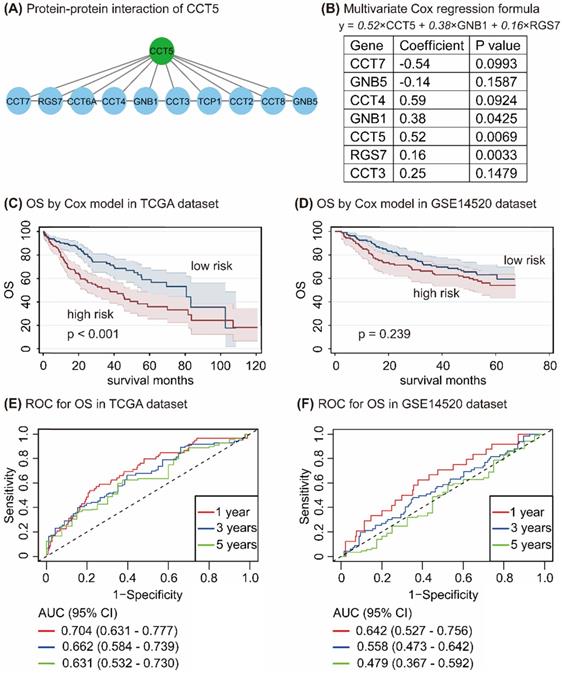 There are some limitations to our study. First, even though the suppressive impact of miR-139-5p on CCT5 was addressed in this study, our analysis did not involve experimental assays to verify the reciprocal repression between miR-139-5p and CCT5. Second, no experiments were performed to address the effects of the miR-139-5p/CCT5 axis on HCC cellular functions; Third, follow-up data of HCC patients from our own dataset were not available; And, the extension of Cox model in our research was relatively unfavorable in the GSE14520, further investigations are needed. However, according to our integrated analysis, we cautiously assumed that the miR-139-5p/CCT5 axis might be a novel mechanism in the progression of HCC. Since the hypothesis was based on a bioinformatic research, further investigations regarding the associations between miR-139-5p and CCT5 should be considered.

This work was supported by National Natural Science Foundation of China (81803901, 81673788, and 81873136). The funders had no role in study design, data collection, and analysis, decision to publish, or preparation of the manuscript.

The data used to support the findings of this study are available from the corresponding author (Z. Yang) upon request.

The authors are accountable for all aspects of the work in ensuring that questions related to the accuracy or integrity of any part of the work are appropriately investigated and resolved.