Endometriosis is a debilitating disorder that is caused by the presence of endometrial cells outside the uterine cavity. It affects up to 10% of women of reproductive age, affecting over 176 million women worldwide [1, 2]. Approximately 50%-80% of women with endometriosis suffer from pelvic pain, and up to 50% suffer from infertility [1, 2]. The exact etiology and pathophysiology of endometriosis is unclear. The most widely accepted hypothesis is that endometriosis is initiated by the transport of endometrial fragments into the pelvic cavity by retrograde menstruation. However, the development of ectopic lesions also depends on factors that facilitate the viability, proliferation, adhesion, neoangiogenesis, and migration of the reverse endometrial pieces and cells [2]. However, the underlying molecular mechanisms need to be fully understood, to enable the exploration of new targets for the treatment of endometriosis.

Circular RNAs (circRNAs) are a class of endogenous RNAs with a closed loop structure that makes them more stable than linear RNAs. circRNAs are highly abundant and specifically expressed in different tissues and developmental stages and have been found to participate in the regulation of biological and pathological processes such as cell proliferation, apoptosis, invasion, angiogenesis, and the epithelial-mesenchymal transition (EMT), by acting as microRNA (miRNA) sponges [3-5]. Previous studies have found aberrant circRNA expression in endometriosis [6, 7]. Some of these studies showed that circRNAs promote the pathogenesis of endometriosis via regulating the function of miRNAs [8-10]. In a previous work, we found that circ_0000673 in the ectopic endometrium (EC) was significantly downregulated compared to the eutopic endometrium (EU) [11]. Circ_0000673 is encoded by the RSL1D1 gene and is 251 bp long. The RSL1D1 gene contributes to the cell cycle, cell proliferation, apoptosis, and metastasis, by downregulating the expression of the PTEN gene [12, 13]. The dysregulation of circ_0000673 in neoplasms may act as a novel oncogene by regulating cell proliferation, migration, and invasion [14, 15].

Using bioinformatics analysis, we found that circ-0000673 contains an miR-616-3p response element. miR-616-3p is reported to be a carcinogenic miRNA (onco-miRNA) in ovarian cancer, breast cancer, and gastric cancer, acting by promoting cell proliferation, reducing apoptosis, and promoting cell invasion and metastasis, the EMT, and other processes. Dysregulated miR-616-3p contributes to abnormal proliferation and apoptosis by targeting PTEN in hepatocellular carcinoma, renal tubular epithelial cells, and cardiomyocytes [16, 17]. However, the functions of circ_0000673 and miR-616-3p in endometriosis have not been clarified. The aim of the present study was to explore the potential role of circ_0000673 in the pathogenesis of endometriosis.

This study was approved and supervised by the Medical Ethics Committee of Xiangya Hospital, Central South University. Written informed consent was obtained from all subjects. Twenty patients with ovarian endometriomas at stage III-IV who provided both EU and EC and 20 women without endometriosis, as normal endometrial (NE) controls, were recruited during the proliferative phase. All subjects were 20-45 years old, with regular menstrual cycles, and had received steroid hormone treatment at least 3 months before specimen collection.

The EU and EC tissues were embedded in paraffin and sliced. Slices were dewaxed in xylene, dehydrated in anhydrous ethanol, and then treated with protease K (20 µg/mL). Subsequently, 3% methanol-H2O2 was added to block endogenous peroxidase. After prehybridization, the hybridization solution with a digoxigenin (DIG) -labeled probe was added, and the sections were hybridized overnight at 42 °C. The sections were then incubated with mouse anti-digoxigenin-labeled peroxidase (anti-DIG-HRP; Jackson ImmunoResearch, West Grove, PA, USA) at 37 °C for 50 min. After washing three times, freshly prepared FITC-TSA chromogenic reagent (Servicebio, Wuhan, China) was added to the reaction in the dark for 5 min at room temperature, and then the sections were incubated with DAPI for 5 min. Finally, the slices were sealed and observed using a Nikon Laser Scanning Confocal Microscope (Nikon, Tokyo, Japan).

Primary eutopic and normal endometrial stromal cells were treated at the third passage, with a cell density of 1 × 104 mL. Lentivirus vectors (GenePharma, Shanghai, China) targeting the junction region of hsa_circ_0000673 were constructed to knockdown the expression of hsa_circ_0000673 in endometrial stromal cells. All lentivirus vectors were transfected into eutopic and normal endometrial stromal cells with transfection enhancers. The sequences were as follows: LV-1, 5′-GTGGTTCTTGCAGATTATCTC-3′; LV-2, 5′-CTTGCAGATTATCTCCCTCCA-3′; LV-negative control (NC), 5′-TTCTCCGAACGTGTCACGT-3′. The transfection efficiency was confirmed using fluorescence microscopy after 24 h, and cells were harvested for further functional experiments after 48 h. Has-miR-616-3p mimic or inhibitor (RiboBio, Guangzhou, China) was transfected using Lipofectamine 2000 reagents (Invitrogen, Carlsbad, CA, USA) according to the manufacturer's protocol. All experiments were performed three times in each assay.

Cells were placed in six-well plates with 1000 cells per well. LV-circ_0000673 or miR-616-3p mimic/inhibitor was transfected, and the cells were cultured for 2 weeks. After washing, the cells were successively treated with 4% paraformaldehyde and 0.1% crystal violet. The number of colonies in each well was counted under the microscope.

Wound healing assays were performed to assess the migration capability of endometrial stroma cells after knockdown of circ_000673. Briefly, endometrial stromal cells were seeded in six-well plates, and LV-circ_0000673 or miR-616-3p mimic/inhibitor was transfected. Then, the monolayered cells were scraped with a micropipette tip to make a straight wound and cultured with serum-free medium for 24 h. The gap width at 0 and 24 h was recorded using microscopy.

Dual luciferase assays were performed to assess the binding between circ_0000673, PTEN, and miR-616-3p. The wild-type (WT) circ_0000673 and the PTEN 3′-UTR were inserted into pMIR-reporter plasmids (OBio Technology Corp, Shanghai, China), and the mutant (MUT) type was designed by mutating the binding site of the seed sequence. The WT and MUT luciferase reporter plasmids were co-transfected with miR-616-3p mimics or negative control into 293T cells. The relative luciferase activity was measured using luciferase reporter kits (Promega, Madison, WI, USA).

Data were expressed as mean ± standard deviation (SD). Two-tailed Student's t tests were performed for pairwise comparisons, and the one-way analysis of variance was used for multiple comparisons. All experiments were performed in triplicate, and a P value <0.05 was taken to indicate statistical significance. The statistical analysis was conducted using SPSS 25.0 and GraphPad Prism 9.0 (GraphPad Software, San Diego, California USA, www.graphpad.com).

Decreased expression of circ_0000673 in endometriosis

Endometrial stromal cells presented a fusiform cell morphology under light microscopy, and the positive expression of vimentin by immunofluorescence stain confirmed the presence of endometrial stromal cells (Figure 2A). Transfection efficiency was observed from the fluorescence of green fluorescent protein, which demonstrated that the cells were successfully transfected with circ_0000673 knockdown lentiviral vectors (Figure 2B). qPCR confirmed that circ_0000673 was expressed at significantly lower levels after transfection with LV-circ_0000673-1/2 in endometrial stromal cells (Figure 2C). CCK-8 and cell clone formation assays were performed to assess the function of circ_0000673 in endometrial cell proliferation. The cell proliferation rate and colony formation capacity in the knockdown LV-circ group were significantly increased compared with those of the negative control (Figure 2D, E). These results indicated that the downregulation of circ_0000673 may play important roles in cell proliferation in endometriosis. Wound healing assays showed that the numbers of migrating cells after transfection with circ_0000673 knockdown lentiviral vectors were significantly increased compared with those in the control group (Figure 2F).

circRNAs have been known to be involved in regulating gene expression by serving as miRNA sponges. We predicted circRNA-miRNA interactions using the TargetScan [19] and miRanda [20] databases, which revealed that miR-616-3p has a binding site to circ_0000673 (Figure 3A). The expression of miR-616-3p was significantly increased after circ_0000673 knockdown (Figure 3B). Compared with the negative group, luciferase intensity was significantly reduced in the group co-transfected with circ_0000673-WT plasmids and miR-616-3p mimics, whereas no significant differences in luciferase intensity were observed in those co-transfected with mutant plasmids or negative controls (Figure 3C). The data verified the binding between circ_0000673 and miR-616-3p.

To further clarify the mechanisms of circ_0000673/miR-616-3p with respect to endometrial cell proliferation and migration, cells were transfected with circ_0000673 lentivirus knockdown vectors and/or miR-616-3p mimics/inhibitors. Cells transfected with knockdown LV-circ_00007673 or miR-616-3p mimic showed significantly increased proliferation capacity, according to CCK-8 and colony formation assays (Figure 4A, B), and also increased migration capacity according to wound healing assays (Figure 4C). The increased capacity for proliferation and migration was recovered by adding an miR-616-3p inhibitor (Figure 4A, B, C). qPCR and western blot assays revealed that circ_00007673 knockdown or miR-616-3p mimics reduced the expression of PTEN and increased PI3K and p-AKT. The expression of PTEN, PI3K, and p-AKT was recovered by adding miR-616-3p inhibitor (Figure 4D, E). These data showed that circ_00007673 and miR-616-3p played opposite roles in endometriosis and downregulation of circ_0000673 increased the expression of miR-616-3p, which may facilitate the downregulation of PTEN by miR-616-3p.

miRNAs are known to be important post-transcriptional repressors, acting by binding to the 3′-UTR. We conducted luciferase reporter assays to assess whether the expression of PTEN was directly regulated by miR-616-3p. miR-616-3p mimics significantly reduced the luciferase activity when co-transfected with PTEN-WT plasmids, whereas no effect on luciferase activity was observed when they were co-transfected with PTEN-MUT plasmids. These data confirmed that miR-616-3p targeted PTEN (Figure 5). 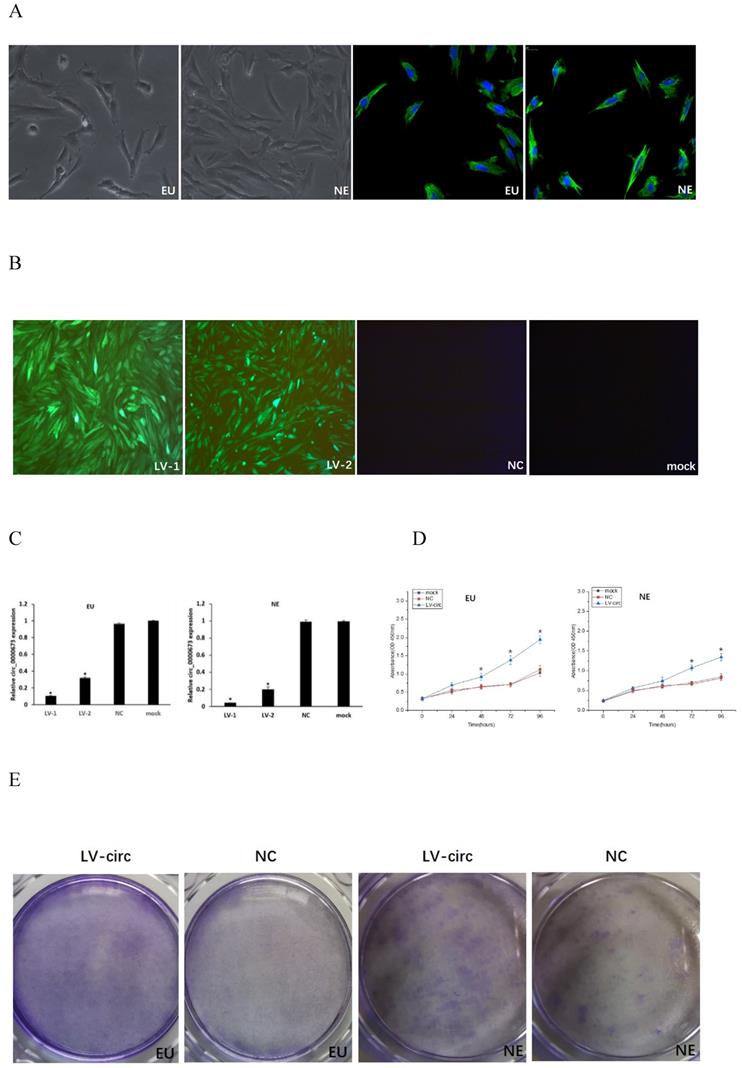 Circ_0000673 suppressed the expression of miR-616-3p. (A) The binding site of circ_0000673 and miR-616-3p. (B) qPCR showed that the miR-616-3p expression was significantly increased after circ_0000673 knockdown in endometrial cells. (C) Relative luciferase activity was attenuated in the group transfected with circ-WT and miR-mimic, whereas no differences were observed in those co-transfected with mutant plasmids or negative control. Data are shown as mean ± SD. *Mean compared with negative control group, P < 0.05.

Endometriosis is an enigmatic disease, affecting mainly women of reproductive age and causing pain and reduced fertility. The treatments available are sub-optimal because of the uncertainty of the pathogenesis of endometriosis [21, 22]. Exploring these mechanisms and identifying new molecular targets are needed as a basis for the development of more effective treatments for endometriosis. circRNAs have been reported to be important in regulating gene expression and biological processes. Differential expression of circRNAs in endometriosis has been identified [6, 11], but the underlying mechanisms have not been clearly defined. In this study, we explored the function of a downregulated circRNA, circ_0000673, on proliferation and migration of endometrial tissue in endometriosis.

The proliferation and migration of endometrial tissue outside of the uterus is a defining characteristic of endometriosis, although the details of the pathological progression remain largely unknown [23]. CircRNAs have been recognized as important molecules in various biological processes, and abnormalities in their abundance or function may contribute to many diseases [3, 24, 25]. Studies have shown the abnormal expression of circRNAs in endometriosis and indicated their value in the diagnosis of diseases [26, 27]. Our previous study showed the profile of differentially expressed circRNAs and revealed that circ_0000673 was attenuated in ovarian endometrioma [11]. In this study, we confirmed the downregulation of hsa_circ_0000673 in the ovarian EC using fluorescent in situ hybridization, a finding that implied that it plays a role in ovarian endometriosis. Our findings indicate that loss of circ_0000673 could promote the proliferation and migration of endometrial cells. Recent studies have suggested that circATRNL1 promotes the EMT by regulating Yes-associated protein 1 [28], and that high expression of circ_0007331 plays a vital role in the proliferation and invasion of cells in endometriosis [10]. These studies suggest that circRNAs play a regulatory role in the progression of endometriosis. Recently, the dysregulation of circ_0000673 was reported to be involved in tumor invasion and differentiation in cholangiocarcinoma, indicating that it may act as a novel oncogene [14]. We therefore hypothesized that circ_0000673 could be involved in regulating endometriosis. 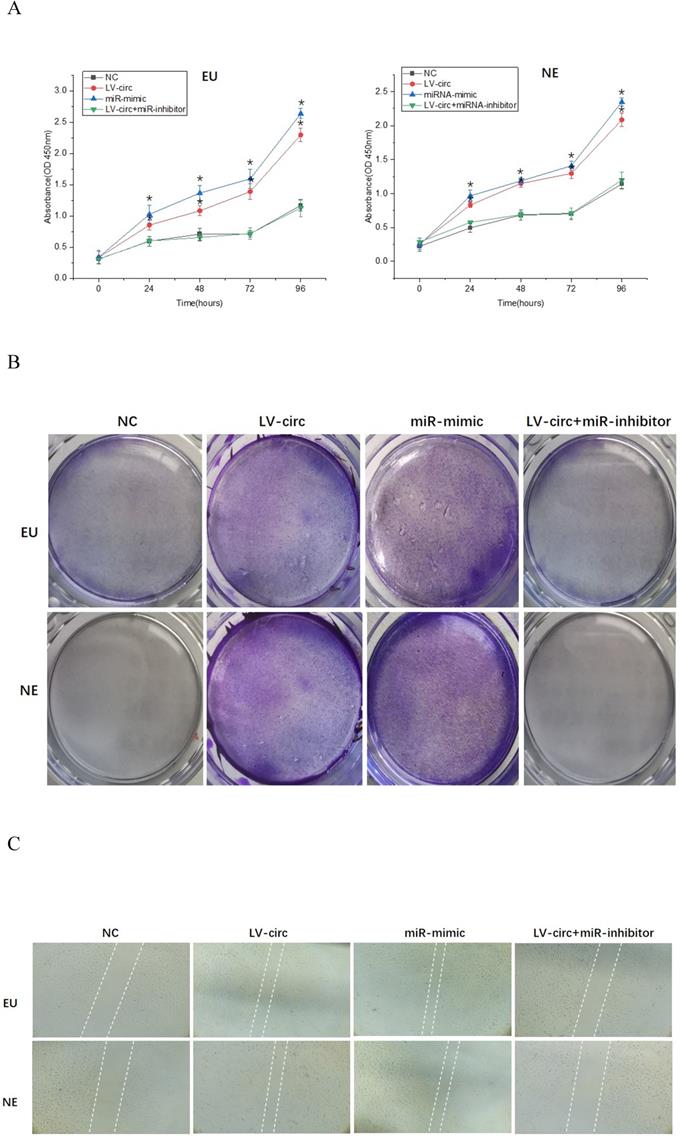 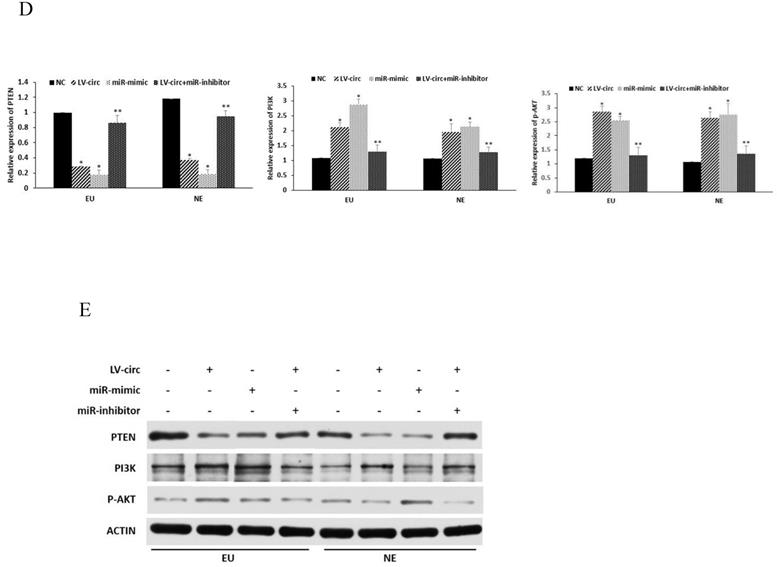 Yongwen Yang performed the experiments and prepared the original draft. Deying Ban and Chun Zhang collected the samples and designed the experiments. Licong Shen acquired the funding, designed the project, and reviewed and edited the paper. All authors read and approved the final manuscript.

20. Pasquinelli A. MicroRNAs and their targets: recognition, regulation and an emerging reciprocal relationship. Nat Rev Genet. 2012;13:271-82