Objective: Chronic periodontitis is a bone-destructive disease affecting periodontal support structures. Although leptin has a protective effect against periodontitis, the underlying mechanism remains unclear. Therefore, this study aimed to investigate the possible role of leptin by examining its relationship with OPG and RANKL in human gingival tissues obtained from patients with chronic periodontitis.

Method: Twenty-two patients with chronic periodontitis were enrolled (10 with moderate periodontitis and 12 with severe periodontitis) in the experimental group, and 12 healthy individuals were enrolled in the control group. Gingival tissue samples were collected, and the protein levels and localization of leptin, OPG, and RANKL were studied using immunohistochemistry (IHC). The staining intensities of leptin, OPG, and RANKL were correlated with the periodontal clinical index. Moreover, real-time quantitative PCR (RT-qPCR) was used to determine OPG and RANKL mRNA levels in gingival fibroblasts stimulated with gradient concentrations of leptin protein in vitro.

Conclusion: Leptin can regulate OPG and RANKL expression in gingival fibroblasts and may thus play a role in the development of chronic periodontitis by modulating the OPG/RANKL ratio.

Chronic periodontitis is an inflammatory and bone-destructive disease affecting periodontal support structures. Chronic periodontitis patients often display alveolar bone resorption that can lead to gomphiasis [1]. Notably, bone resorption is the leading cause of tooth loss in adults. Leptin is a 167 amino-acid protein that is encoded by the leptin gene [2]. It exerts its effect by binding to its receptor, which is widely expressed in the central nervous system and peripheral tissues [3]. In recent years, increasing attention has been focused on studying the role of leptin in bone metabolism. Some studies have shown that leptin may cause either osteogenesis or resorption, depending on the target tissue. Specifically, its action in the central nervous system ultimately leads to production of signals promoting bone destruction, whereas activation of targets in the peripheral tissues promotes bone formation. RANKL binds to the receptor activator activator of NF-κB (RANK), a membrane receptor mainly produced in osteoclasts and their progenitor cells. This stimulates both differentiation of precursor cells into osteoclasts and the activity of the mature osteoclasts. OPG plays a bone-protective role because it competes with RANK for RANKL binding [4]. However, the relationship between leptin and OPG/RANKL in gingival tissue and human gingival fibroblasts (HGFs) has not been investigated.

Twenty-two patients with chronic periodontitis from the Stomatology Center of Xiangya Hospital of Central South University were recruited for this study from March to June 2019. Among them, 10 were diagnosed with moderate chronic periodontitis (moderate group, clinical attachment loss (CAL) 3-4 mm, probing depth (PD) 5~7 mm), and 12 with severe chronic periodontitis (severe group, CAL ≥ 5 mm, PD ≥ 7 mm) [8]. The control group consisted of 12 age- and sex-matched healthy subjects. The comparison of basic clinical data is shown in Table 1. Inclusion criteria included the absence of history of systemic or infectious diseases, and the absence of smoking or chronic alcohol abuse. Subjects did not receive periodontal treatment within 6 months of beginning this study; they also did not take antibiotics, immunosuppressants, or other drugs within 3 months prior to this study. Exclusion criteria included obesity, pregnancy or lactation and previous orthodontic treatment.

For the immunostaining study, gingival tissues of patients were obtained from periodontal surgical resection, whereas those of the controls were collected from gingiva removed during the extraction of the third molar. The age and sex of the subjects in the experimental and control groups were matched.

For the in vitro experiments, we used cells isolated from gingival tissues removed during the extraction of the third molar. The three donors used for these experiments were 15-30 years old and did not have periodontal or apical diseases.

Informed consent was obtained from all subjects and this trial was approved by the Ethics Committee of Xiangya Hospital of Central South University (Number: 2019030082).

Gingival tissues were formalin-fixed, paraffin-embedded, sliced continuously, and dewaxed by xylene and ethyl alcohol. Antigen retrieval was performed by treatment with citric acid buffer heated in a water bath for 25 min. Next, the sections were treated with 3% H2O2 to block endogenous peroxidases, blocked for 1 h at room temperature (RT) with 10% blocking serum in Tris-buffered saline Tween-20 (TBST), and incubated with antibodies for leptin, OPG, and RANKL (all diluted 1:100) at 4 °C in a moist chamber overnight. The next day, slides were incubated with horse-radish peroxidase (HRP) -conjugated secondary antibodies at RT for 1 h. DAB was used for color development and hematoxylin was used for counterstaining. In the negative controls, the primary antibody was replaced with phosphate-buffered saline (PBS).

Five views of each slice were randomly selected at high magnification (400×), and used to determine the immunoreactive score (IRS) [9] as follows. First, the staining intensity (SI) of each slide was assessed by two independent pathologists and assigned a number from 0 to 3 (0, no staining; 1, light yellow, 2, pale brown, and 3, dark brown). Second, a positive-cell-proportion score (PP) was evaluated (0 to 4) based on the percentage of positive cells (0, no positive cells; 1, <10% positive cells; 2, 10%-50% positive cells; 3, 50%-80% positive cells; and 4, >80% positive cells). The IRS for each slide was calculated by multiplying the SI and PP values. To eliminate the influence of subjective factors, the two researchers determined these scores independent of each other, and clinicopathological information of the sections was not disclosed to them in advance.

Culture and identification of HGFs

HGFs were isolated from the gingiva of patients who underwent a third molar extraction and were cultured using the tissue-explant method. Tissue origin was determined by immunocytochemical staining for vimentin and keratin.

Fourth- generation HGFs under favorable growth conditions were inoculated in 6-well plates at a density of 1×105 cells/well, and 2 mL DMEM was added to each well. Cells were left to grow under favorable conditions until they reached 100% confluency. Leptin was then added at various concentrations (0, 0.1, 0.5, 1, 5, or 10 µg/mL), and the cells were collected after 24 h with trypsin.

The primers in real-time PCR

IBM SPSS Statistics 24.0 (IBM Corp, Armonk, NY, USA) was used for statistical analysis. All data are presented as mean ± SD. To evaluate the differences in IRS, one-way analysis of variance (ANOVA) was used for two-group comparisons and Tukey's test was used for multiple-group comparisons. Pearson correlation analysis was used to analyze the correlation between leptin and each of the other two proteins, OPG and RANKL. In the case of qPCR results, single-factor t-tests were used to evaluate the differences between groups. In all analyses, p < 0.05 was considered statistically significant.

Leptin expression decreases with the progression of inflammation

The expression of leptin in samples from the three groups (control, moderate chronic periodontitis, and severe chronic periodontitis) is shown in Fig. 1A-C. In all samples, leptin was located in the cytoplasm of gingival epithelial cells and the inflammatory cells in the connective tissue. In the control group, leptin was widely expressed in the lamina propria with deep staining (Fig. 1A). The expression levels decreased with the progression of inflammation (Fig. 1B-C). The IRSs for leptin for the three groups are shown in Table 3. The differences among the three groups were statistically significant (p < 0.05).

OPG expression decreases with the progression of inflammation 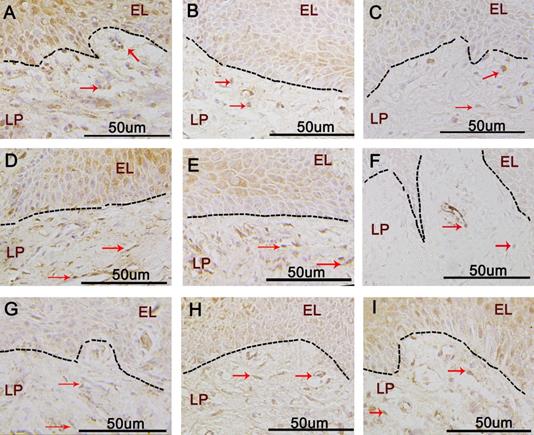 RANKL expression increases with the progression of inflammation

Correlations between staining intensities of leptin, OPG, and RANKL and clinical indices

The spindle-shaped cells were positively stained for vimentin (Fig. 2A) and negatively stained for keratin (Fig. 2B). These results are consistent with the biological characteristics of mesoderm-derived cells and not epithelial cells, and, combined with the sampling site, led us to the conclusion that the cells were gingival fibroblasts. 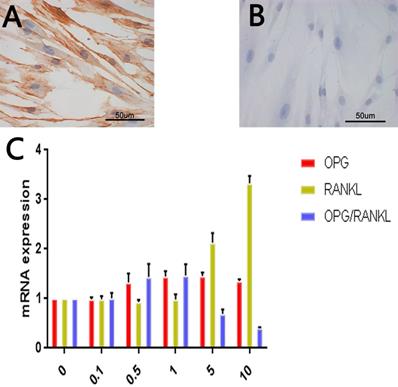 The correlations between the staining intensity of leptin, OPG and RANKL and clinical indexes

For RANKL, leptin at the three lowest concentrations (0.1, 0.5, and 1 µg/mL) did not significantly alter mRNA levels. However, treatment with the two highest concentrations (5 and 10 µg/mL) had a clear upregulatory effect. The maximum increase was observed using 10 µg/ml of leptin and resulted in RANKL expression 3 times greater than that of the control group (p < 0.05).

Alveolar bone resorption is an important pathological manifestation of chronic periodontitis, and recent studies have shown that leptin is involved in the regulation of bone metabolism [10]. In vitro studies have shown that, under leptin stimulation, the mRNA level of OPG increased and that of RANKL decreased significantly in both human peripheral blood mononuclear cells and mouse osteoblasts [11,12]. Leptin inhibited adipocyte differentiation in human marrow stromal cells and promoted osteoblast differentiation [13]. This study suggests that the regulation of OPG/RANKL pathway by leptin may be related to the differentiation of osteogenic precursor cells [14]. In addition, leptin may promote RANKL expression through OB-rb/ERK and OB-rb/PI3K/AKT signaling pathways [15]. In recent years, the OPG/RANKL pathway has been found to play an important role in periodontitis, as mice that over-express RANK exhibited severe alveolar bone loss [16], and periodontal therapy has been shown to reduce the level of RANKL in crevicular fluid, and therefore, decrease the RANKL/OPG ratio [17].

Leptin has been shown to be involved in a variety of bone metabolic diseases. Subcutaneous administration of leptin to rats with prednisolone-induced osteoporosis, a condition characterized by decreased serum OPG and increased serum RANKL levels, counteracted the effects of prednisone on OPG and RANKL levels and improved bone mineral density and content [18]. Simopoulou et al. found that leptin and its receptor mRNA and protein are expressed in osteoarthritis articular chondrocytes, and found higher mRNA expression levels in advanced osteoarthritis cartilage compared to minimal osteoarthritis; they thought it may be related to the grade of cartilage destruction, indicating that leptin can indeed affect cartilage metabolism directly [19].

Leptin is a hormone secreted by adipocytes, and it is known as the paracrine factor released upon obesity and metabolic syndrome [27,28]. Leptin has been found to modulate the innate and adaptive immunity responses in mucosal surfaces [29]. The results of the present study indicate that leptin released under systemic conditions may dysregulate the innate immunity in the gingival epithelium and lamina propria, and then lead to the chronic periodontitis.

Zheng et al. [30] established a periodontal defect model in rats with osteoporosis in which rat bone marrow mesenchymal stem cells were transfected with adenovirus containing the human leptin gene; these were later implanted into the periodontal defect area. Well-formed bone tissue emerged, indicating the potential applications of leptin, both for periodontal regeneration in patients with osteoporosis, and as a potential new treatment strategy for chronic periodontitis.

Informed consent was obtained from all subjects and this trial was approved by the Ethics Committee of Xiangya Hospital of Central South University (Number: 2019030082).

8. American Academy of Periodontology Task Force Report on the Update to the 1999 Classification of Periodontal Diseases and Conditions. J Periodontol. 2015;86:835-8

20. Gangadhar V, Ramesh Thomas. Correlation between leptin and the health of the gingiva: a predictor of medical risk. Indian J Dent Res. 2011;22:537-41