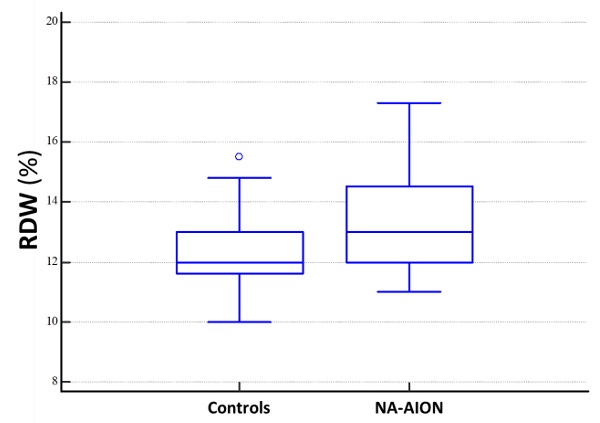 Conclusions: Results suggest that RDW may be somehow involved in the pathogenesis of NA-AION. However, high-quality cohort studies are warranted to confirm whether, or not, an altered RDW may be considered a potential biomarker of this vascular disorder affecting the optic nerve.

Non-arteritic anterior ischemic optic neuropathy (NA-AION) is the most frequent form of acute optic neuropathy in individuals aged over 50 years, affecting between 2.3 and 10.2 people per 100,000 population annually in the U.S. and accounting for up to 6,000 new cases every year [1, 2].

NA-AION is a multifactorial disease. Systemic hypertension, diabetes mellitus, atherosclerosis, and a crowded optic disc are well-known risk factors [3, 4]. Former reports have suggested that systemic and local inflammation may affect the pathogenesis of NA-AION, by inducing both atherosclerosis and hypercoagulability [5-11]. Inflammation is the result of complex interactions between the immune and inflammatory system, which includes neutrophils, macrophages, and lymphocytes. The absolute counts of white blood cells (WBC), neutrophils, and lymphocytes, and their ratios can be reliable indicators of chronic inflammation [12]. Neutrophil/lymphocyte ratio (NLR) has become an important biomarker of systemic inflammation and an independent prognostic factor in some chronic diseases and solid malignancies [12]. Furthermore, recent studies have reported higher NLR values in NA-AION patients [10, 13, 14].

The role of platelets is crucial in thrombo-occlusive disorders, such as ischemic and hemorrhagic stroke [15] and retinal vein occlusion (RVO) [16, 17]. Recent studies have suggested that platelets may also been implicated in the pathogenesis of NA-AION [14, 18]. Mean platelet volume (MPV) is an important marker of the production rate and size of platelets and has been correlated to platelet activation [19]. Larger platelets are metabolically more reactive and aggregate more easily.

The purpose of this study was to evaluate the role of complete blood cell count (CBC) dimensional measures, such as MPV and red cell distribution width (RDW), and CBC-combined indices, including NLR, derived NLR [dNLR = neutrophils/(white blood cells - neutrophils)], and platelet/lymphocyte ratio (PLR), in NA-AION.

This was a retrospective case-control study, including 37 newly diagnosed NA-AION patients and 37 sex- and age-matched subjects with no evidence of NA-AION, examined at the Ophthalmology Unit, Department of Medical, Surgical and Experimental Sciences, University of Sassari, Sassari, Sardinia, Insular Italy, in 2017-2018. To ensure appropriate matching, patients of non-Sardinian descent were excluded.

Ethical approval was waived by the local Ethics Committee of the Azienda Ospedaliero-Universitaria di Sassari, Sassari, Italy, in view of the retrospective nature of the survey, which was conducted in compliance with the tenets of the Declaration of Helsinki. Each participant received detailed information and provided informed consent before inclusion.

One sex- and aged-matched control per each case was randomly selected from the cataract registry. Subjects with present or past history of AION, RVO, or retinal artery occlusion were excluded. All controls underwent a complete eye examination, consisting of BCVA, slit-lamp biomicroscopy, applanation tonometry, and dilated fundus evaluation. The same medical conditions as for NA-AION patients were also recorded.

Definitions of systemic hypertension, diabetes, and hypercholesterolemia have been reported previously [20].

The ability of platelet number, MPV, RDW, NLR, and dNLR to predict NA-AION was determined using receiver operating characteristics (ROC) curve analysis. The optimal cut-off for sensitivity and specificity was calculated by maximizing the Youden's index.

The attributable risk of the association between NA-AION and RDW was calculated. For this purpose, the upper limit of the reference range for RDW (14.5%) was used.

One percent of the patients with NA-AION and 1% of the controls eligible for this retrospective survey declined to participate. The main reason was “not interested”.

The study group included 37 newly diagnosed NA-AION patients (23 men, 14 women; mean age: 65.6±12.4 years). No patient reported pain with eye movements before visual loss. All eyes with NA-AION had no vision improvement over time. Automated perimetry revealed an altitudinal defect in 22 (60%) eyes and generalized depression in 15 (40%). All affected eyes had extensive leakage of fluorescein in the swollen portion of the optic disc.

Table 2 shows ROC curve analysis results for platelet count, MPV, RDW, NLR, and dNLR. The area under the curve (AUC) values disclosed a good specificity only for dNLR, whereas all the indices analyzed showed a relatively poor sensitivity.

Results of multivariate logistic regression models, including platelet number, MPV, RDW, and NLR or dNLR as covariates are presented in Table 3. A statistically significant relationship between RDW and NA-AION (p≤0.05) was found.

RDW accounted for 33% of the attributable risk for NA-AION.

NA-AION is a leading cause of acute loss of vision in individuals aged 55 to 70 years. This condition is thought to be the result of circulatory failure within the optic disc. Many systemic disorders, which may reduce optic disc perfusion, have been reported as risk factors. Among these there are systemic hypertension [3, 4, 21], diabetes mellitus [3, 4, 22], hypercholesterolemia [4, 23], ischemic heart disease [3], acute blood loss [24], and marked nocturnal arterial hypotension, especially in patients taking anti-hypertensive medications [25]. Furthermore, a crowded optic disc may be a predisposing factor for NA-AION, either by mechanically impairing the axoplasmic flow or amplifying the microvascular compression secondary to optic disc swelling of any cause [26]. On the other hand, Glucose-6-Phosphate Dehydrogenase (G6PD) deficiency may have a protective effect against the development of NA-AION [27].

The exact pathophysiological mechanisms underlying NA-AION are still unclear. The rapid onset, stable course with no or minimal visual improvement, and association with circulatory risk factors are suggestive of a vascular origin. According to the most reliable theory, impairment of the optic disc circulation, aggravated by axonal crowding, eventually reaches a point at which insufficient oxygen levels cause ischemia and disc edema [28]. A vicious circle of ischemia, swelling of axons, microvascular compression, and further ischemia leads to progressive optic nerve head damage. Nocturnal arterial hypotension contributes to the worsening of ischemia [25].

In our survey, patients with NA-AION showed a significantly lower platelet count and significantly larger platelets than controls. Former investigations have reported a correlation between NA-AION and increased MPV [11, 13, 14, 18], a result consistent with our study. Furthermore, Stiebel-Kalish et al. [30], in a systematic review and meta-analysis on aspirin use after NA-AION, concluded that there is weak evidence showing a beneficial effect of acetylsalicylic acid in preventing NA-AION in the second eye. On the whole, these findings support the idea that platelets may be somehow involved in the pathogenesis of NA-AION. However, while platelets do play an important role in thrombo-occlusive disease, their role in NA-AION is less clear. According to Hayreh [31], in the typical NA-AION, which is a hypotensive disorder, there is no scientific rationale for aspirin use in preventing recurrences of NA-AION, if not for a small number of cases due to true embolism, where it may be beneficial [31].

Changes in CBC dimensional indices, such as MPV and RDW, reflect inflammation severity in several disorders, because systemic inflammation not only affects the survival of platelets and red blood cells, but also deforms their membranes [32]. RDW is an index measuring variation in red blood cell size or volume (anisocytosis). Generally, it is expressed as the ratio between the standard deviation of erythrocyte volume and mean corpuscular volume (MCV), multiplied by 100. RDW has historically been used to help classify anemia. However, it has recently been implicated in subclinical inflammation, as well as in other human diseases different from anemia, including chronic heart failure, myocardial infarction, stroke, liver impairment, pregnancy complications, and NA-AION [14, 33, 34]. In our investigation, we observed that RDW values were higher in NA-AION patients than in controls.

NLR is a broadly accessible, easy to calculate, and cheap inflammatory biomarker. Clinical evidence suggests that it may predict disease development, progression, and prognosis and response to treatment. A relationship between NLR and disease activity and outcome has been observed in several malignancies and chronic inflammatory disorders, including arthritis, diabetes mellitus, systemic hypertension, and chronic obstructive pulmonary disease [12, 35-38]. An association between the severity of diabetic retinopathy and NLR has been documented [39], whereas contrasting data have been reported about the role of NLR in AMD [40-42].

In this study, patients with newly diagnosed NA-AION had significantly higher NLR and dNLR values than cataract controls with no evidence of present or past NA-AION. Likewise, in a retrospective study on 45 NA-AION patients and 50 age- and sex-matched controls, Polat et al. [13] found that NA-AION patients had significantly higher values of NLR. A similar result was reported by Gunes et al. [10] in a survey comparing 56 NA-AION patients with 56 healthy subjects. These authors also found that ROC curves for NLR predicted NA-AION development with a sensitivity of 85% and specificity of 41% [10]. Conversely, Inanc et al. [11] observed no correlation between NLR and NA-AION.

In our study, dNLR showed a higher statistical significance than NLR (p=0.01 vs p=0.03). Furthermore, AUC values disclosed a higher specificity for dNLR (81% vs 68%). Overall, these findings seem to support the possibility that dNLR might be a more reliable biomarker than NLR in patients with NA-AION.

Multivariate logistic regression models disclosed a significant correlation only between increased RDW and NA-AION (p≤0.05). The attributable risk of the association between NA-AION and RDW was 33%. The clinical meaning of these findings is not clear. Recently, Ozkok et al. [43] have reported that RDW was significantly higher and correlated significantly with baseline and final visual acuity in RVO patients. These authors postulated that RDW may represent an integrative measure of a multifactorial disease process, involving oxidative stress, chronic inflammation, and endothelial dysfunction, which contribute to RVO pathogenesis. Possibly, this may also be the case in NA-AION.

Our study has some intrinsic limitations, such as the retrospective nature and case-control design. This type of design usually do not allow to determine the temporal relationship between exposure and disease; therefore, it cannot be clearly determined whether the higher values of MPV, RDW, NLR, and dNLR are possible causes of NA-AION or simply correlates of other factors associated with NA-AION. Prospective studies may provide a more reliable evidence to look for a potential cause-effect relationship between these dimensional and CBC-combined indices and NA-AION. Another limitation of this study is the fact that the cases and controls were not matched for certain parameters which might have affected CBC indices, such as body mass index, diabetic control, anemia, anti-hypertensive medications, and smoking history. Furthermore, we do not know how many patients had a crowded optic disc, a known risk factor for NA-AION, because data about optic disc size were incomplete. Last, but not least, our survey was performed on a relatively small, genetically homogeneous group of subjects of Sardinian ancestry. Consequently, our results might not be extended to NA-AION patients of non-Sardinian descent.

To sum up, our results suggest that RDW may be a potential disease biomarker in patients with NA-AION. However, high-quality cohort studies are warranted before any definitive conclusion on the putative role of increased RDW on NA-AION can be drawn.

This manuscript was in part presented as a Scientific Poster (#5244) at the 22nd European Association for Vision and Eye Research (EVER) Meeting, Nice (France), October 17-19, 2019.

The funding organizations had no role in the design or conduct of this research.

15. Du J, Wang Q, He B. et al. Association of mean platelet volume and platelet count with the development and prognosis of ischemic and hemorrhagic stroke. Int J Lab Hematol. 2016;38:233-239