Bullous Pemphigoid and Diabetes medications: A disproportionality analysis based on the FDA Adverse Event Reporting System 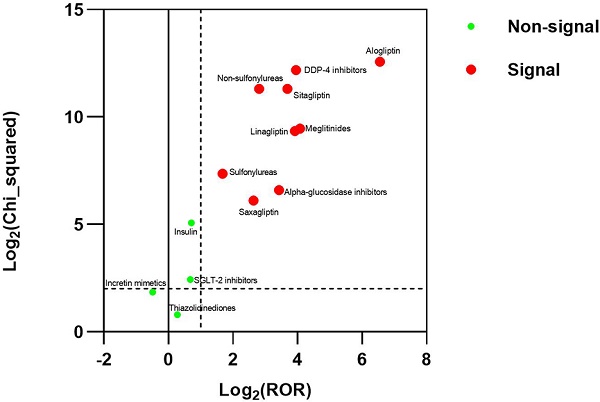 Methods: All spontaneous reports of diabetes medications inhibitors-related BP recorded in the FAERS between March 2004 and August 2020 were included in the present study. Disproportionality analysis was performed to find the signal between diabetes medications and BP. The Chi-Squared with Yates' correction (χ2Yates), proportional reporting ratio (PRR) and the lower limit of the 95% confidence interval of the Reporting Odds Ratio (ROR025) were calculated as a measure. A signal was detected when ROR025 > 1, PRR > 2, χ2Yates > 4 and at least 3 cases.

Conclusions: This study detected a strong signal between BP and DDP-4 inhibitors, alpha-glucosidase inhibitors, meglitinides, non-sulfonylureas, and sulfonylureas in FAERS. The signal was significantly higher with alogliptin than with the other DPP-4 inhibitors. The study doesn't suggest the association between the incretin mimetics, insulin, SGLT-2 inhibitors, thiazolidinediones and BP in FAERS.