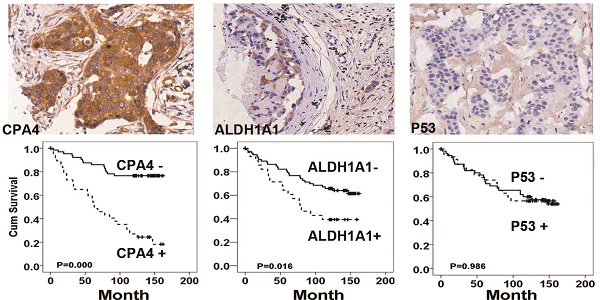 Background: Triple-negative breast cancer (TNBC) is an aggressive cancer subtype lacking effective treatment options, and p53 is the most frequently mutated or deleted gene. Carboxypeptidase A4 (CPA4) is an extracellular metallocarboxypeptidase, which was closely associated with aggressiveness. Although a recent study indicated that CPA4 could induce epithelial‑mesenchymal transition in breast cancer cells, no studies investigated its stemness-related function and the correlation between CPA4 and p53 in TNBC. In this study, we aimed to investigate the CPA4 levels in breast cancer tissues and analyze its association with p53, and study its roles in cancer stemness maintenance.

Conclusion: This study demonstrated for the first time that CPA4 was negatively correlates with p53 expression and inhibition of CPA4 could reduce the number of breast cancer cells with stemness property. It might be a potential target for the TNBC treatment.

The cancer stem cell (CSC) hypothesis suggests that many cancers are sustained by a small population of CSCs, which have the ability to self-renew, differentiate and generate daughter cancer cells. CSCs were thought to be responsible for cancer recurrence and metastasis. Cancer stem cell could be recognized by markers, and Aldehyde dehydrogenase 1A1 (ALDH1A1) is a candidate breast CSC marker [1]. A great many of evidences indicated that CSC were enriched in TNBC. Our recent study showed that breast cancer cell line BT474 would undergo epithelial mesenchymal transition (EMT) and possess triple negative phenotype (BT474-PTEN-LTT, LTT) after trastuzumab treatment[2]. Then we employed RNA-seq to identify the potential genes involving this process, and Carboxypeptidase A4 (CPA4) was selected as the top candidate gene, and p53 was also found to be down-regulated in LTT cells[3]. CPA4 is a zinc-dependent peptidolytic enzyme. Our previous studies firstly demonstrated that CPA4 was over-expressed in pancreatic, liver, esophageal and lung cancer tissues[4-8]. Additionally, aberrant CPA4 expression was closely associated with tumor progression[9, 10]. However, few studies investigated its stemness-related function and the correlation between CPA4 and p53 in breast cancer. In this study, we aimed to investigate the association between CPA4 and p53 in breast cancer tissues, and study its roles in cancer stemness maintenance.

UALCAN database (http://ualcan.path.uab.edu) was used for analyzing cancer transcriptome data from The Cancer Genome Atlas (TCGA). The prognostic significance of the mRNA levels of CPA4 in breast cancer was evaluated by using the Kaplan-Meier plotter (www.kmplot.com).

Cancer cells were seeded at a density of 2,000 cells per well in 96-well plates and allowed to adhere overnight. Cell growth was determined by MTS assay according to manufacturer's instruction by measuring the absorbance at 490 nm on a Synergy 2 plate reader (Biotek).

Mammosphere culture was done according to MammoCult™ Human Medium Kit (05620, STEMCELL Technologies Inc.) supplemented with Heparin and Hydrocortisone. Single cells were prepared from mechanical and enzymatic dissociation were plated in six-well ultralow attachment plates (Corning) at a density of 500 cells/ml. After 14 days of culture, the number of mammospheres was counted on a Nikon Eclipse TE2000-S microscope and the photos were acquired with MetaMorph 7.6.0.0.

The SPSS 15 software package (SPSS, Inc., Chicago, IL) was used for statistical analysis. The association between the markers and clinicopathologic features was analyzed using χ2-test or two-sided t-test as appropriate. Survival curves were calculated using the Kaplan‑Meier method and compared by the log-rank test. Spearman's rank correlation coefficient and Fisher's exact test were used to explore the association between CPA4 and ALDH1A1 expression. All the comparisons were conducted using two-tailed, and p<0.05 was considered statistically significant.

Immunohistochemistrical analysis demonstrated that CPA4 was highly expressed in 32.1% of breast cancer samples (45/140), but weak or no staining of CPA4 occurred in the adjacent normal tissues (Figure 2A). Statistical analysis also indicated that positive staining for CPA4 was significantly associated with TNBC phenotype, lymph node metastasis and stage, while it was not significantly correlated with age, grade or depth of invasion (Table 1).

Correlations between the Levels of CPA4, P53 and ALDH1A1

Correlation between CPA4, p53 and ALDH1A1 in breast cancer tissues

To further validate the results of public datasets, we evaluated the expression of p53 and ALDH1A1 in the same tissue array by IHC. The results showed that the positive rate of ALDH1A1 was 25% (35/140), and positive staining of p53 was detected in 50% of breast cancer samples (70/140) (Table 1). Spearman correlation analysis also revealed that aberrant expression of CPA4 expression was positively associated with ALDH1A1 (P<0.01) and negatively correlated with p53 (P<0.05) in breast cancer tissues (Table 2). These observations demonstrated that over-expression of CPA4 might play important roles in cancer stemness. 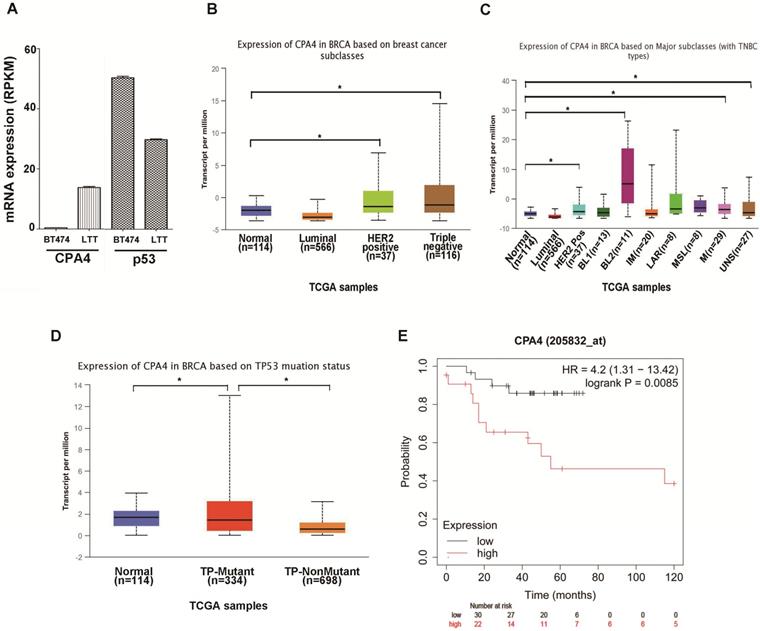 To study the function of CPA4 in LTT cells, we used siRNA knockdown, which reduced the CPA4 expression by 90% (Figure 3A). We examined the effects of CPA4 knockdown on breast cancer proliferation via MTS assay. The results indicated that suppression of CPA4 in LTT cells significantly suppressed cancer cell growth (Figure 3B). We next studied the effect of CPA4 knockdown on in vitro tumorigenicity using colony-formation assays in soft agar. Colony-formation rates following CPA4 siRNA treatment were reduced to 62.2% compared with those of the controls in LTT cells (Figure 3C). The role of CPA4 in breast cancer cell self-renewal ability was determined using the mammosphere formation in serum-free suspension culture. CPA4 knockdown dramatically suppressed mammosphere formation by 75.8% in LTT cells, and the mammosphere size was also significantly decreased (Figure 3D). These results indicated that CPA4 may play functional roles in breast cancer stemness maintenance. 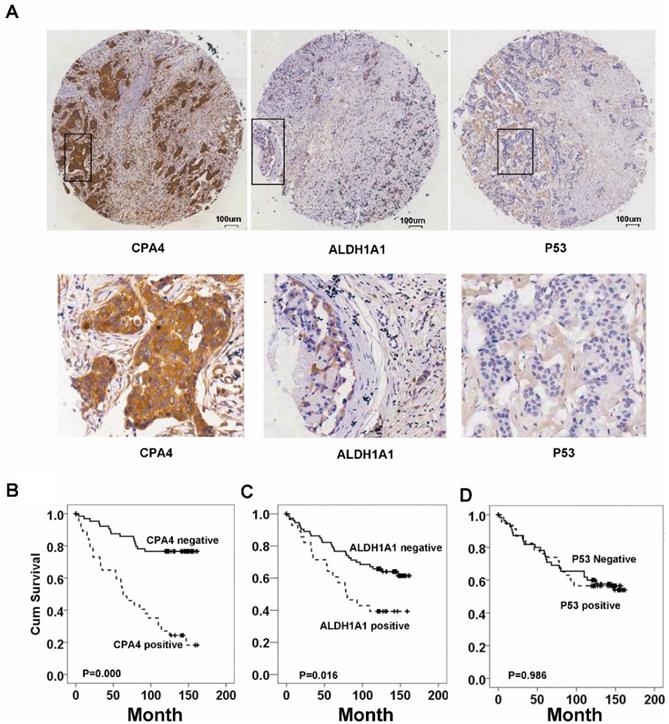 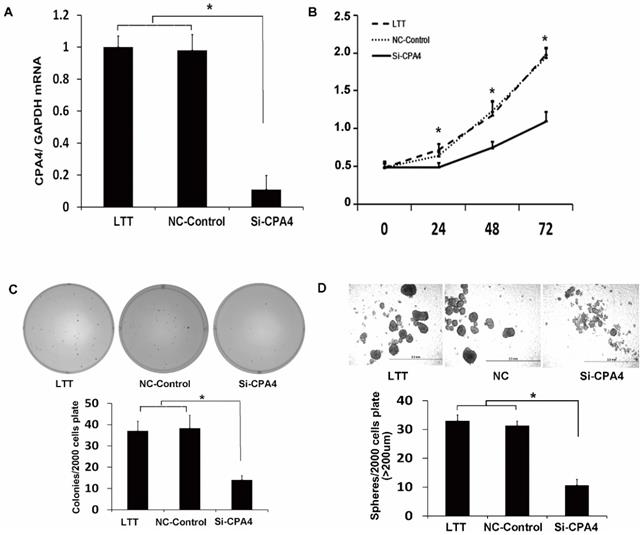 Breast cancer is the most commonly diagnosed cancer in women in China[11]. From its molecular and genetic characteristics, breast cancer is divided into several subtypes, among which, TNBC is the most aggressive and lacks effective treatment. In 2011, TNBC was divided into 7 subtypes: basal-like 1 (BL1), basal-like 2 (BL2), mesenchymal(M), mesenchymal stem-like (MSL), immunomodulatory (IM), luminal androgen receptor (LAR) and unstable (UNS) according to gene expression profiling[12, 13]. p53 were always deleted in TNBC tissues, and this deletion was associated with a poor prognosis[14, 15].

CPA4, a metallocarboxypeptidase, catalyzes carboxy-terminal amino acids from the end of protein. Previous studies in our lab demonstrated that CPA4 was upregulated in BT474-PTEN-LTT cells but minimally detected in BT474 cells[3]. We next reported that CPA4 was significantly elevated in pancreatic cancer, gastric cancer, colorectal cancer and esophageal squamous cell carcinoma tissues[3, 4, 6-8]. Other studies confirmed that CPA4 was elevated in several cancer tissues and played functional roles in cancer progression[16, 17]. Handa et al. reported that CPA4 might be a promising therapeutic target in TNBC with aggressive phenotypes[18]. However, the correlation between CPA4 and p53 in TNBC tissues and its roles in the stemness phenotype remain unclear.

In this study, over-expression of CPA4 was observed in TNBC-distinct subgroups, including the BL2, M and UNS subgroups. Interestingly, CPA4 mRNA levels were also upregulated in the TP53-mutant subgroup. To further validate the CPA4, p53 and ALDH1A1 levels in breast cancer tissues, we examined their levels in breast cancer and adjacent normal tissues via immunohistochemistry. CPA4 levels were elevated in 32.1% of the breast tissue samples (45/140), and positive staining for CPA4 was statistically significantly associated with lymph node metastasis and stage. ALDH1 is one of the most widely used markers for identifying CSCs in many cancers[19, 20]. We next evaluated ALDH1A1 and p53 expression in the same tissue array via immunohistochemistry. Positive staining of ALDH1A1 occurred in 25% of the samples (35/140), and p53 staining occurred in 50% of the breast cancer tissues (70/140). Spearman's rank correlation revealed that aberrant expression of CPA4 was positively associated with ALDH1A1 (P<0.01) and negatively correlated with p53 (P<0.05) in breast cancer tissues. Kaplan-Meier survival analysis showed that CPA4 and ALDH1A1 over-expression was significantly correlated with overall survival of breast cancer patients. From the point of clinical application, high levels of CPA4 was found in TNBC tissues, and it could be measured as a potential serum biomarker for TNBC. Next, it was worthwhile to test the levels of CPA4 in breast cancer serum samples, and studied its diagnostic efficacy or prognosis value in TNBC.

Furthermore, CPA4 was demonstrated to be a functional gene and may promote breast cancer progression. We used siRNA to knockdown CPA4 levels in LTT cells to assess CPA4's effects on cell stemness in vitro. CPA4 downregulation significantly reduced lung cancer cell LTT proliferation, colony-formation assays in soft agar and mammosphere formation in serum-free medium. In future studies, we will further identify the molecular mechanisms of CPA4 in breast cancer progression. According to the above results, we speculated that CPA4 might help to establish the cancer microenvironment to facilitate cancer progression by catalyzing the substrate. It was possible that function-blocking agents targeting CPA4 might inhibit TNBC progression.

In conclusion, this is the first report to show that CPA4 was negatively correlates with p53 expression and inhibition of CPA4 could reduce the number of breast cancer cells with stemness property. It might be a potential therapeutic target for treating TNBC. However, further studies are needed to clarify the role of CPA4 in breast cancer with p53 deletion.