Acute myeloid leukemia (AML) is now recognized as a hematological malignancy characterized by the blockage of myeloid differentiation and uncontrolled clonal proliferation [1]. AML, poses a significant clinical burden in the worldwide, and is the most common type of leukemia in adults with an incidence of 3.7 per 100,000 people. Based on the newly update data of leukemia, the incidence of AML in USA is 5.2 per 100,000 for males, 3.6 per 100,000 for females [2]. Despite recent advance in the AML, the overall survival rate remains <50% [3, 4]. Further studies are required eagerly to clarify the underlying mechanisms of AML and provide novel biomarker for prognosis and treatment. In view of the fact that accurate genetic examinations in treatment and prognosis of AML patients [5], it is important to develop novel biomarkers related to AML.

Cathepsin B (CTSB) was primarily found as a cysteine protease that was involved in the degradation of lysosomal proteins [6]. Over expression of CTSB has been reported in numerous types of solid tumors, including salivary adenoid cystic carcinoma, brain tumor, breast tumor, colorectal tumor, and so on [7-10]. We have reported CTSB was overexpressed in gastric carcinoma [11] but down regulated in hepatocellular carcinoma [12]. It was considered as a potential biomarker of poor prognosis [7-10].

It was reported that overexpression of CTSB could promote cell invasion and metastasis of colorectal cancer, liver cancer, gastric cancer, glioma and ovarian cancer [13-17]. In addition, silence or inhibition of CTSB expression has been reported to inhibit cell proliferation, including endometrial cancer cells, meningioma cells, and human T cells [18-20]. Here we reported that CTSB mRNA was upregulated in AML peripheral blood samples and related to patient's poor prognosis. Then CTSB functions were investigated using the HL-60 AML cell line by knockdown the expression of CTSB. Our results showed that knockdown CTSB by shRNA could decrease cell proliferation and tumorigenesis in HL-60 cells. The analysis of pathway signals showed that knockdown CTSB in HL-60 cells could decrease the expression of p-AKT. So decreased CTSB expression repressed the cell proliferation and tumorigenesis maybe through AKT inactivation in HL-60 cells.

Eighty seven newly diagnosed AML patients from Aug 2010 to Jun 2014 and 36 healthy control at the First Affiliated Hospital of Guangzhou Medical University were enrolled in this study. AML and healthy control peripheral blood samples were collected and mononuclear cells were isolated by Ficoll-Hypaque gradient separation according the manufacturer protocol. Characteristics of AML patients are described in Table 1. The follow-up time of the AML patients ranged from 1 to 119 months. The median follow-up time was up to 35 months. With the informed consent of the patients, the peripheral blood samples of AML patients were collected before anti-leukemia treatment. The study was approved by the Ethics Committee of the first affiliated Hospital of Guangzhou Medical University.

Total RNA was isolated from PBMC (peripheral blood mononuclear cell) of AML patients using TRIzol reagent (Transgen Biotech, Beijing, China), according to the protocol of manufacturer. First Strand cDNA Synthesis Kit (Thermo Fisher scientific, Waltham, MA, USA) was used to reverse transcribe RNA to cDNA according to the manufacturer's protocol. A total of 1.0 ug of mRNA was used to reverse transcribe RNA to cDNA. RT‑qPCR was carried out with SYBR Green Master Mix (Transgen Biotech, Beijing, China). The qPCR was performed at a total 10 μl and the following thermocycling conditions were used for the qPCR: Initial denaturation at 95˚C for 10 min; 40 cycles of 95˚C 15 sec and 55˚C for 20 sec, followed by a dissociation step at 95 °C for 15 s, and 60 °C for 30 s, Primer sequences were used as follows: CTSB sense 5'-GCAGGCCGGGCACAAC-3', antisense 5'-GGAGGCCCAGAGCTGCCAC-AT-3'. GAPDH sense 5'-TGTTGCCATCAATGACC-CC-3', antisense 5'-CTCCACGACGTACTCAGC-3'. The results were normalized to the expression of GAPDH.

All experiments were performed in triplicate. The relative expression of target gene was calculated by 2-ΔCt method (ΔCt = CT target gene-CTGAPDH).

The ability of CTSB-knockdown HL-60 cell lines growing in anchorage-independence was assessed by colony formation in soft agar as previously described [22]. 5000 cells were suspended in 1ml of RPMI 1640 with 0.33% agarose (Sigma), 10% FBS and plated into a well of 12-well plate. After 14 days culture, colonies were identified with a diameter > 125 μm.

Stable knockdown of endogenous CTSB was performed using retrovirus constructs targeting CTSB. The shRNA target sequences were: shRNA1, 5-CCAACACGTCAC CGGAGAGAT-3; shRNA2, 5-GCTGGTCAACTATGTCAACAA-3. The synthetic oligos were cloned into the pSuper-retro-puro vector. The successful plasmid construction was verified by DNA sequencing. Production of retrovirus was performed according to the instructions in 293FT cells. HL-60 cells were subjected with infection of retrovirus expressing CTSB-shRNA1 and CTSB-shRNA2. An empty pSuper-retro-puro was used as a control (Scramble).

The tumorigenic capacity was analyzed by subcutaneous injecting HL-60 Scramble cells and HL-60 CTSB-shRNA2 cells into nude mice. All the mice were bred and maintained under SPF conditions in the Department of Animal Center, the first Affiliated Hospital of Guangzhou Medical University. Animal protocol was approved by the Institutional Animal Care and Use Committee of Guangzhou Medical University. 12 healthy nude mice, which were four to six weeks old, were randomly assigned to each group. Each mouse was subcutaneous injected with 5 × 106 cells in 1:1 serum free medium and Matrigel solution. Tumor growth was measured and tumor volume was calculated according to the formula: tumor volume [mm3] = (length [mm]) × (width[mm])2 × 0.5 [23].

Statistical analyses were performed using Statistical Program for Social Sciences 20.0 (SPSS, Chicago, IL, USA) and Graph Pad Prism 5.0 (Graph Pad Software, La Jolla, CA, USA). The correlation between the CTSB expression and the clinicopathological parameters of patients with AML was assessed by a chi-square test. The Kaplan-Meier analysis was used to evaluate the survival curve of distinct CTSB expression of AML patients. The prognostic value of CTSB on AML patients' survival was analyzed by the Cox proportional hazard model. A p-value less than 0.05 was regarded as statistically significant.

CTSB was up-regulated in AML and correlated with clinical outcomes

CTSB expression was correlated with OS and DFS

CTSB knockdown inhibits the proliferation and tumorigenesis of HL-60 cells

HL-60 cells were infected with CTSB-shRNA1, CTSB-shRNA2 retrovirus which were mediated by pSuper-retro-puro vector. Western blot analysis was used to determine the effect of CTSB knockdown. The result showed that the CTSB protein expression level was decreased in CTSB-shRNA cells (Fig. 2A). CCK-8 analysis was performed to detect the cell proliferation effect of CTSB-shRNA in HL-60 cells. As show in Figure 2B, a significant decrease in proliferation rate was observed in CTSB-shRNA1 and CTSB-shRNA2 cells compared to scramble cells, indicating that CTSB knockdown could inhibit HL-60 cells' proliferation (Fig. 2B). To further examine tumor-suppressing activity of CTSB-shRNA, softagar assay was performed to examine the anchorage-independent growth of HL-60 cells. The results showed that CTSB-shRNA could inhibit anchorage-independent growth of HL-60 cells (Fig. 2C, D).

The effect of CTSB knockdown on tumor growth in vivo was examined in a xenograft nude mice model (Fig. 3). Mice were injected subcutaneously with 5×106 individual cells infected of CTSB-shRNA1 and scramble retrovirus. Then the tumor size and weight generated by CTSB-shRNA HL-60 cells and scramble cells were compared. The results showed a smaller tumor volume and less tumor weight in CTSB-shRNA group than scramble group (Fig. 3B, C). Thus, CTSB knockdown attenuates tumor growth of HL-60 cells in vivo.

To investigate the underlying mechanisms of decreased cell proliferation and tumorigenesis of HL-60 CTSB-shRNA cells, western blot analysis was performed to detect the common tumor-related signaling pathways. We analyzed the MAPK/P38 pathway, the AKT pathway, and the ERK pathway. Then we found that when we knockdown the expression of CTSB in HL-60 cells, the p-AKT expression was downregulated, but there was no significant difference on the expressions of p-p38 and p-ERK between HL-60 shRNA cells and scramble control cells (Fig. 4). So CTSB may regulate HL-60 AML cell growth and tumorigenesis via the regulation of AKT signaling pathway. 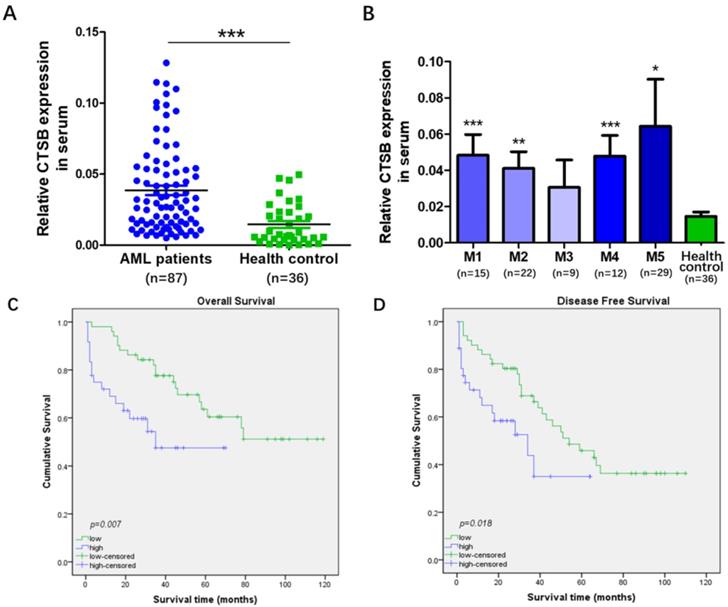 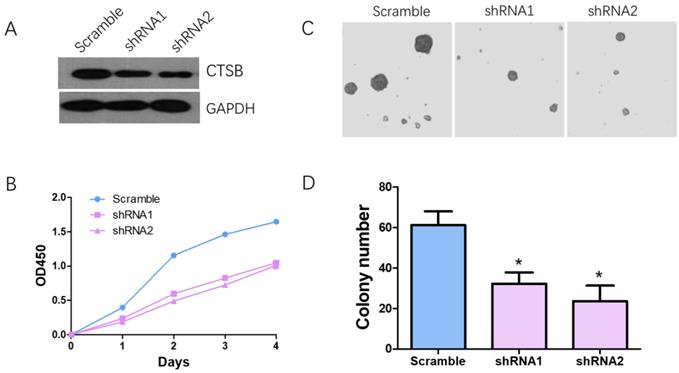 CTSB knockdown attenuates tumor growth of HL-60 cells in nude mice model. (A) HL-60 CTSB-shRNA2 and scramble cells were injected subcutaneously to generated tumors in mice. All mice were executive 3 weeks after injection; (B) Tumor size was measured. The result showed that tumor volume of CTSB-shRNA2 was decreased than scramble mice. (C) Tumor weight showed a decrease in CTSB-shRNA mice (p=0.033). 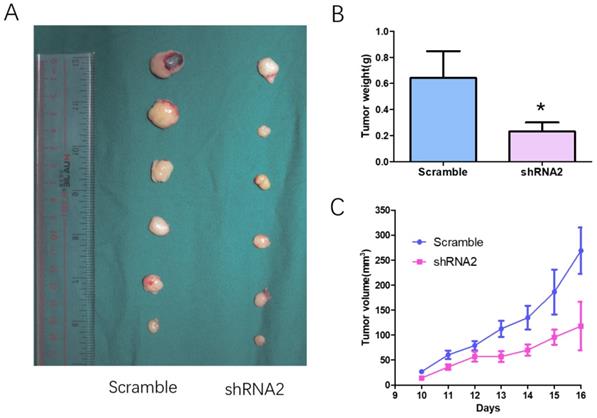 CTSB knockdown could inhibit the expression of p-AKT. Protein levels of p-p38, p-Akt, p-ERK were assessed in HL-60 CTSB-shRNA cells and scramble cells by western blotting, the p-AKT expression was downregulated after CTSB knockdown. 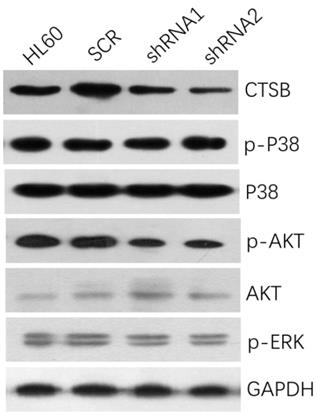 Cathepsin is a lysosomal protease belonging to papain family [24]. Cathepsins can be classified into serine cathepsins, cysteine cathepsins and aspartate cathepsins[25]. Human cysteine cathepsins are essential in the degradation of the proteins that are internalized in the lysosomes [26]. However, cathepsins were reported not only localized endoly-sosomal compartment, they also localized in cell cytoplasm, nucleus, mitochondria and extracellular. This indicated cathepsins may have broad biological activity [27, 28]. CTSB, a kind of lysosomal cysteine protease, has been reported to be a potentially effective biomarker as well as an important contributor to the progression of different types of cancers.

It was reported that CTSB might be an optimal diagnostic and prognostic marker [29-31], and CTSB can be developed to design enhanced drug delivery approaches in the recent years [32]. We also reported that CTSB may serve as an optical prognostic marker in gastric carcinoma and hepatocellular carcinoma [11, 12]. Many researchers presented that CTSB acted as a metastasis-related gene [7, 13, 18]. The plasma membrane localization of CTSB correlated with metastatic tumors [33, 34]. CTSB was also reported related to autophagy. Autophagy, a lysosomal-dependent process could prevent cancer by removing damaged proteins and reducing reactive oxygen species (ROS), and promoting the cell death. CTSB inhibition was showed to increase cell autophagy, and accumulation autophagic biomarkers could be observed [35, 36].

To clarify the tumor-associated functions and related mechanism of CTSB gene in AML. We generated HL-60 CTSB-shRNAs cell lines using retrovirus infection. Based on the cell model, we observed knockdown CTSB expression could result in inhibition of HL-60 cells' proliferation. Anchorage-independent cell growth analysis showed that CTSB-shRNA could inhibit anchorage-independent growth of HL-60 cells in vitro. Furthermore, HL-60 CTSB-shRNA cells were subcutaneously injected in mice to generated tumors. Inhibition of tumor weight and tumor volume by CTSB-shRNA was observed in vivo. However, we did not observe a significant change in the invasiveness of HL-60 CTSB-shRNA cells compared to control cells (data was not shown). We have not performed the cell autophagic study about CTSB in AML. It is an interesting project and we will clarify it in the next report.

The datasets and materials used in the current study are available from the corresponding authors.

The Committee on the Ethics of the First Affiliated Hospital of Guangzhou Medical University approved this study. All the patients and healthy control volunteers provided written informed consent for the use of clinical specimens. Animals were purchased from Animal experimental center, Shanghai, China. The protocol was approved by the Institutional Animal Care and Use Committee of Sun Yat-sen University. All mouse procedures were performed in strict accordance with the recommendations in the Guide for the Care and Use of Laboratory Animals of Sun Yat-sen University. Animal experiment was performed in Sun Yat-sen University and all surgery was performed under sodium pentobarbital anesthesia, and all efforts were made to minimize suffering.