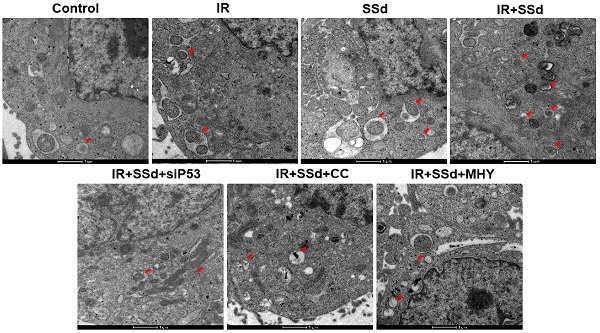 Objective: The aim of this study was to analyze the effects of saikosaponin-d (SSd) on autophagy activity and radiosensitivity of hepatoma cells, and to elucidate its related molecular mechanisms.

Results: SSd can significantly increase the apoptosis of hepatoma cells induced by radiation and inhibit the proliferation of hepatoma cells. The addition of the autophagy inhibitor chloroquine (CQ) or an mTOR agonist (MHY1485), which could reduce the promoting effect of SSd on radiation-induced apoptosis and inhibitory effect on the proliferation of hepatoma cells. Transmission electron microscopy and confocal microscopy results also showed that the number of autophagosomes was significantly higher in the radiation and SSd co-treatment group than in the radiotherapy or SSd alone group; however, the effect of SSd on autophagy in hepatoma cells was decreased after adding MHY1485, siRNA-P53 or AMPK inhibitor (Compound C). Western blot analysis showed that after the addition of SSd, the phosphorylation of mTOR was significantly decreased by radiation, the expression of the autophagy-related proteins LC3-II and Beclin-1 was increased, p62 was decreased, and the expression of cleaved caspase-3 and cleaved PARP was enhanced; this effect of SSd was partially reversed after the addition of MHY1485, siRNA-P53 or Compound C.