Introduction: Recently, the efficacy of mesenchymal stem cells (MSCs) mediated by their tissue repair and anti-inflammatory actions in the prevention and therapy of various disorders has been reported. In this research, our attention was focused specifically on the prevention and therapy of glucocorticoid-induced osteonecrosis. We investigated the stress resistance of MSC against glucocorticoid administration and hypoxic stress, which are factors known to induce osteocytic cell death.

Results: With exposure to either dexamethasone or hypoxia, MLO-Y4 showed reduced mitochondrial membrane potential, ATP5A and upregulation of 8-OHdG, cleaved caspases and XIAP. Those changes were significantly enhanced by treatment with dexamethasone plus hypoxia. In MSCs, however, mitochondrial membrane potentials were preserved, while no significant changes in the pro-apoptosis or anti-apoptosis molecules analyzed were found even with exposure to both dexamethasone and hypoxia. No such effects induced by treatment with dexamethasone, hypoxia, or both were demonstrated in MSCs at all.

Discussion: In osteocyte cells subjected to the double stresses of glucocorticoid administration and a hypoxic environment osteocytic cell death was mediated via mitochondria. In contrast, MSC subjected to the same stressors showed preservation of mitochondrial function and reduced oxidative stress. Accordingly, even under conditions sufficiently stressful to cause the osteocytic cell death in vivo, it was thought that the function of MSC could be preserved, suggesting that in the case of osteonecrosis preventative and therapeutic strategies incorporating their intraosseous implantation may be promising.

Mesenchymal stem cells (MSCs) show a cluster action, and manifest tissue repair and anti-inflammatory activities at sites of injury, and moreover have regenerative and improvement properties that become active in the presence of injured or defective tissues. Because of their ease of administration, the clinical application of MSC in the therapy and prevention of a variety of conditions is being actively pursued. Already, reports have described the efficacy of methods using MSC in both the prevention and therapy of a wide spectrum of conditions including hepatic, pancreatic, neurogenic, cardiac, and ischemic brain diseases [1-3].

Glucocorticoid-induced osteonecrosis is a difficult condition to treat, and is associated with a markedly impaired quality of life (QOL). And despite extensive and diverse research devoted to aspects such as elucidation of its pathophysiology, therapy, and prevention, its underlying pathogenetic mechanisms remain as before unclear. Ischemic-hypoxic events are recognized to be an important triggering factor, and both oxidative injury and mitochondrial injury have been implicated in the process culminating in the necrosis of osteocyte cells [4-6]. Recently, in a domestic rabbit osteonecrosis model the administration of MSC was reported to inhibit the development of osteonecrosis [7], suggesting maintenance of normal MSC function even at sites of injury exposed to ischemia-hypoxia. Indeed, the activity of MSC has been documented to be preserved or even enhanced in an hypoxic environment [8]. For these reasons the functional preservation of MSC when exposed to hypoxic stress and/or oxidative stress generated by glucocorticoid administration continues to arouse major attention in the medical community.

Meanwhile, angiogenesis-osteogenesis coupling injury has been implicated in the development of osteocytic cell necrosis, with this in vivo environment of glucocorticoid-induced osteonecrosis reported to be reproducible in vitro by the addition of glucocorticoid to cultured osteocyte cells placed in a hypoxic environment [9]. But before any prophylactic or therapeutic effects against glucocorticoid-induced osteonecrosis by MSC implantation can be anticipated, it is extremely important that the maintenance of MSC function in the same environment be clearly documented to be feasible.

This background prompted us to undertake the present experiment, in which the state of functional preservation of MSC in an hypoxic environment to which glucocorticoid was added, which is considered to replicate the intraosseous environment at the time of glucocorticoid administration, was investigated.

An established murine osteocyte cell line (MLO-Y4) (Kerafast, Boston, MA) was maintained as a subconfluent monolayer culture in the MEM alpha medium (Gibco, Tokyo, Japan) supplemented with 10% fetal calf serum [10]. Mouse MSC derived from the bone marrow (Cyagen, Silicon Valley, CA) was maintained in the stem cell growth medium (Cyagen). Both cell lines were cultured at 37°C under 20% O2 and 5% CO2. At the culture reached 80% confluency while being cultured at 37°C under 20% O2 and 5% CO2, both cell lines, MLO-Y4 and MSC, were treated under three different conditions for 24 hours: exposed to dexamethasone (Dex, MSD, Tokyo, Japan) at the concentration of 0.4 ng/ml (Dex group); hypoxia at a 1% oxygen concentration (Hypoxia group) or both (Dex/Hypoxia group). As a control (C group), both cell lines were cultured under 20% oxygen in the culture medium without dexamethasone. After the exposure, the numbers of viable and nonviable cells determined using 0.25% trypan blue dye exclusion method were counted with Countess 2 FL (Thermo Fisher Scientific, Waltham, MA), and survival rates were calculated.

Cultured cells were stained with Mito Tracker Red CMXRos (Thermo Fisher Scientific) at a final concentration of 200 nM in culture medium at 37°C under 20% O2 and 5% CO2 for 30 minutes [11,12]. Cells were then fixed with 4% paraformaldehyde; nuclei were stained with 4', 6-diamidino-2-phenylindole (DAPI). Representative five fields were photographed using a Zeiss-LSM710 camera (Zeiss, Baden-Württemberg, Germany). Ratios of mitochondrial membrane potential positive cells were calculated by division with cell numbers stained with DAPI.

Viability assays were then performed using an Apoptotic/Necrotic Cells Detection Kit (PromoKine, Heidelberg, Germany) according to the manufacturer's instructions, and the percentages of apoptotic/necrotic cells relative to the total cell number were determined. In the viability assays, apoptotic cells can be detected by the staining with fluorescein-labeled annexin V (green fluorescence) and necrotic cells by the staining with Ethidium homodimer III, a highly positively charged nucleic acid probe, which is impermeant to live cells and early apoptotic cells, but stains necrotic cells and late apoptotic cells (entering into secondary necrosis) with red fluorescence. Fluorescence-positive cells were evaluated by phase contrast and fluorescence (470 nm and 530 nm LED modules) microscopy using BZ-X700 (Keyence, Tokyo, Japan).

Cultured cells were fixed in 4% paraformaldehyde, washed in phosphate buffered saline (PBS), and permeabilized with 0.3% Triton X-100 in PBS. Nonspecific binding was blocked by incubating sections with 10% bovine serum albumin (Dako Cytomation, Santa Clara, CA) in PBS for 15 minutes. They were incubated with anti-ATP synthase (ATP5A) (Proteintech, IL), anti-8-hydroxy-2'-deoxyguanosine (8-OHdG) (Abcam, Cambridge, U K), anti-X-linked inhibitor of apoptosis protein (XIAP) (Abcam), or anti-caspase-3 (Proteintech) antibody for 2 hours at a concentration of 10.0, 2.5, 10.0, or 1.5 µg/ml, followed by a fluorescent-labeled secondary antibody (for ATP5A, 8-OHdG, and XIAP, Alexa 488, Thermo Fisher Scientific; for caspase-3, Alexa 594) and by DAPI for 30 minutes. After washing, a prolong diamond antifade mountant (Thermo Fisher Scientific) was added, and cover slips were mounted. Images were taken using Zeiss-LSM710. For ATP5A, cultured cells were labeled with the first antibody after labeling with the mitochondrial membrane potential-dependent probe.

Survival rates of MLO-Y4 and MSC subjected to cytotoxic stress of dexamethasone, hypoxia, or both

Survival rates and mitochondrial membrane potentials of MLO-Y4 and MSC with the exposure to cytotoxic stresses. A. Survival rates of MLO-Y4 and MSC after the exposure to dexamethasone (Dex group), hypoxia (Hypoxia group), or both dexamethasone and hypoxia (Dex/Hypoxia group). C group shows control groups without any exposure. MLO-Y4 shows decreased survival rates with the exposures; MSC shows resistance to them. B. Representative mitochondrial-membrane-potential-positive cells of MLO-Y4 and MSC under the treatment of Dex, hypoxia, or both. C. Ratios of number of mitochondrial-membrane-potential-positive cells divided by cell number stained with DAPI in MLO-Y4 and MSC under the treatment of Dex, hypoxia, or both. MLO-Y4 shows decreased mitochondrial membrane potentials with exposure to either Dex and hypoxia, and Dex plus hypoxia further decreased them; MSC maintains membrane potentials even with exposure to them. Black pillars show MLO-Y4 and white ones show MSC. **; means p < 0.01 and ***; p < 0.001.

Mitochondrial membrane potentials of MLO-Y4 and MSCs under cytotoxic stresses of dexamethasone, hypoxia or both

Decreased expression of ATP5A, an energy producing enzyme, under the cytotoxic stresses

An ATP synthase, ATP5A, was demonstrated in the control groups of both MLO-Y4 and MSC, showing merged signals with Mito tracker red indicating its localization at the mitochondria. In MLO-Y4, expression of ATP5A decreased with exposure to dexamethasone, hypoxia and Dex plus hypoxia; In MSC, the expression as well as mitochondrial membrane potentials were maintained even when exposed to them (Fig. 2A and B). These effects in MLO-Y4 were demonstrated to be significant quantitatively by western blot (Fig. 2C and D).

In glucocorticoid-induced osteonecrosis, remodeling of necrotic foci does not occur readily, and so in many cases the condition becomes progressive and eventually requires artificial joint replacement. Accordingly, the repair and regeneration of osteonecrotic tissues have become major topics of interest. Recently, the ability of MSC to mitigate the DNA injury associated with cell death (particularly apoptosis) and vascular injury, etc., has been highlighted [1, 13, 14]. The implantation of MSC is also showing promise in the treatment of glucocorticoid-induced osteonecrosis because of its tissue repair and bone regenerative effects. However, much more still needs to be learned about the functional preservation of MSC in environments subjected to glucocorticoid-induced stress. This research was conducted with MSC and osteocyte cells placed in a hypoxic environment with added glucocorticoid. This model is said to relatively well reproduce the intraosseous events occurring at the time of glucocorticoid administration in vivo. By determining differences in stress resistance between the two, the possible role of MSC therapy in environments sufficiently stressful to cause osteocytic cell death was explored.

In osteocyte cells placed in a hypoxic environment to which glucocorticoid was added the preservation and function of mitochondria were lost, with an increase in oxidative stress and a state predisposing to cell death induced. Also, apoptosis of osteocyte cells was induced as shown by an increase in caspase. The mild elevation of XIAP observed was interpreted as a reactive increase to the protection of cell death. Accordingly, since clinically, the adjacent intraosseous area including the site sustaining osteonecrosis constitute a stressful environment, it was considered that the effects of interventions such as simple intraosseous bone implantation in the same sort of environment would be meager or even cause the development of new osteocytic cell death. In contrast, the mitochondria of the MSC placed in an environment exposed to cytotoxic stresses remained intact, and their function was preserved. The development of oxidative stress was thought to have been inhibited as well. The mitochondrial membrane potentials studied here were used as a marker of the course of mitochondrial apoptosis. Even when MSC were exposed to cytotoxic stresses their mitochondrial membrane potentials remained stable, with almost no apoptosis seen. Accordingly, even in the same intraosseous environment associated with osteocytic cell death in vivo, MSC seemed less likely to develop cell death such as mitochondrial apoptosis, in addition to which the possible preservation of energy production and other mitochondrial functions was also suggested. Furthermore, in the case of MSC, no changes in XIAP or caspase were evident. Since the mitochondria could be preserved even in an environment exposed to stress, this means that the impact of stress on them is minimal, namely, that they show sufficient resistance against the types of stresses to which they were exposed in the present experiment. In the normal mouse as well, it has been reported that in vivo bone marrow falls into a hypoxic state [15], whereas MSC in a similar hypoxic state continue to function normally. For this reason even when MSC are implanted intraosseously in a stressful environment it is not unreasonable to expect a full-fledged preservation of their function. 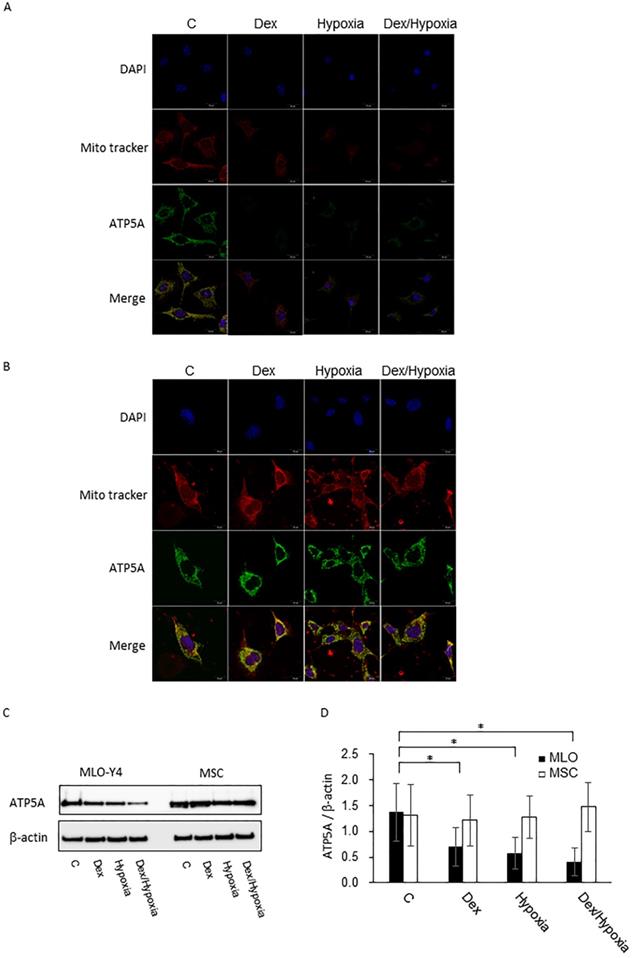 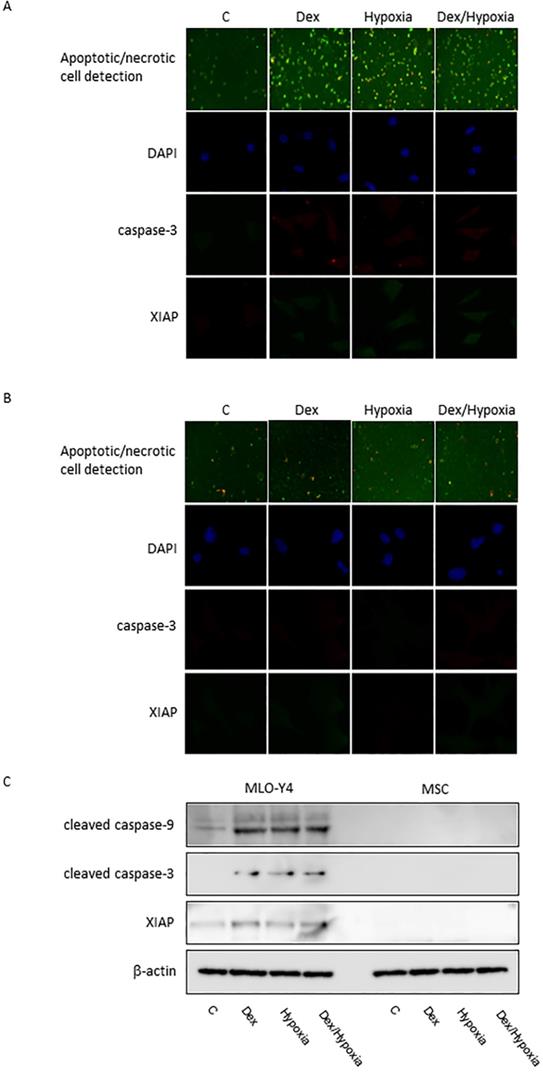