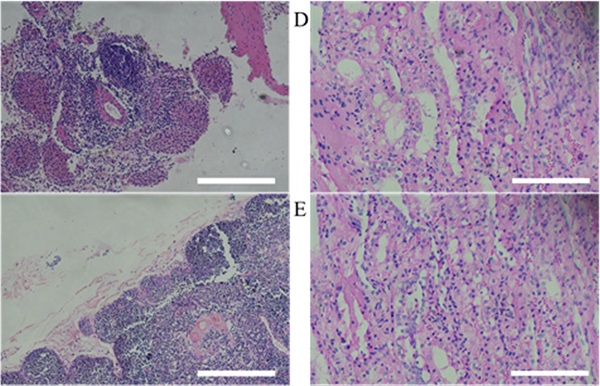 Background: Multipotent and immune privileged properties of mesenchymal stem cells (MSCs) were investigated for the treatment of various clinical diseases. For the years, many researches into the animal studies evaluated human stem cell therapeutic capacity related to the regenerative medicine. However, there were limited reports on immune privileged properties of human MSCs in animal studies. The present study investigated hematological and biochemical parameter and lymphocyte subset in mini-pigs following human MSCs transplantation as a means of validation of reliability that influence the animal test results.

Methods: The miniature pigs were transplanted with human MSCs seeded with scaffold. After transplantation, all animals were evaluated by CBC, biochemistry and lymphocyte subset test. After 9 weeks, all pigs were sacrificed and organs were histologically analyzed.

Results: CBC test showed that levels of RBC were decreased and reticulocyte, WBC and neutrophil were increased in transient state initially after transplantation, but returned to normal value. The proportion of B lymphocyte and cytotoxic T cell were also initially enhanced within the normal range temporarily. The female and male miniature pigs showed normal ranges for blood chemistry assessments. During the 9 weeks post-operative period, the animals showed a continuous increase in body weight and length. Furthermore, no abnormal findings were observed from the histological analysis of sacrificed pigs.

Mesenchymal stem cells (MSCs) had been considered as prominent therapeutic agents in regenerative medicine. It was reported that MSCs had been utilized in various studies due to their peculiar qualities including self-renewability, multi-differentiation potential and immune-privileged [1, 2]. To date, various preclinical animal experiments had been performed when inventing human stem cell therapies [1, 3, 4, 5, 6]. And many results had been reported for regeneration of various tissues [1, 7, 8, 9]. Additionally, valuable outputs concerning application of cellular densities, induced biological responses, adverse effects, sites and methods of cell administration in clinical trials had been gained. However, limited studies had been performed on physiological and immunological status in animals.

Many animal studies had been executed before use in clinical trials to confirm efficiency and safety on MSCs therapy. Various kinds of animals were used for evaluating preclinical investigations, including mouse, rat, rabbit, goat, dog and miniature pig [1, 3, 4, 5, 6]. And they reported that human MSCs could be employed to regenerate various kinds of tissues such as neuron, bone, teeth and cartilage. Furthermore, along with the verification of reliability of these results on animal studies, another crucial aspect was the validation of physiological and immunological responses by transplanted human MSCs. Several studies had been reported to prove these aspects, however most studies were performed on mice and rats [10, 11].

Similarly, physiological and genetic characteristics to human, animal studies in miniature pig were significant value in preclinical studies [12, 13, 14]. Therefore, further progress demanded studies on immunogenicity of transplanted cells into miniature pigs to assess the stability and reliability of these preclinical studies. Moreover, studies of hematological and histological changes following transplantation of human MSCs into miniature pigs had not been reported. So, the evaluation of physiological and immunological changes in vivo study was essential.

Generally, the value of complete blood counts and biochemistry were objective to evaluate physiological states [15, 16]. We analyzed changes of hematologic and biochemistry values. Specially, red blood cell (RBC) and reticulocyte were changed by bleeding by invasive surgery and then return to normal status [17, 18]. In addition, white blood cells (WBC) and neutrophil had been supposed markers for early response of inflammation and bacterial infection [19, 20]. Therefore, we dealt with a comparison of changes in hematologic and biochemical values ​​in normal controls for 9 weeks pre and post human MSCs transplantation. Interestingly, the lymphocyte subset was an indicator for the presence of leukocyte antigens [21, 22]. These antigens were normally found on WBCs, either on the surface of white blood cells or inside cells. Several researches had been reported that antigens with abnormal characteristics were present in abnormal immune status [23, 24]. After that, we investigated physiological and immunological status of those transplanted human MSCs about body length and weight in miniature pig and also confirmed histological evaluation. The aim of this study was to evaluate the hematological status, lymphocyte subtype variation and histopathological analysis of miniature pigs which were transplanted human MSCs.

Female and male miniature pigs aged from 12 to 18 months and weighing approximately 25 kg were used in this study. The miniature pigs were kept in healthy condition, without any disease during the experiments. All animal experiments were conducted after getting approval from the Ethics Committee of Gyeongsang National University (GNU-160913-p0047). In this study, a total of 22 miniature pigs (female: 15, male: 7) were used to perform CBC and serum biochemistry analysis. To establish lymphocyte subset, 17 miniature pigs (female: 10, male: 7) were used. In addition, the six miniature pigs (female: 3, male: 3) were used for the evaluation of human MSCs transplantation. All animals were kept for at least 3 weeks before the experiment and were anesthetized with zoletil 50 (Virbac, Carros, France, KR; 10 mg/kg) and xylazine hydrochloride (Bayer Korea, Ansan, KR; 4 mg/kg). After anesthetizing, submandibular and mandibular body was exposed by incision. Further, to evaluate the in vivo efficacy of MSCs, a total of 1 x 107 human MSCs with scaffold were transplanted onto the bone defects. The incision site was sutured with two layers (Ethicon, Somerville, NJ, USA). After 9 weeks, animals were sacrificed and organs were sampled for histological analysis.

Blood samples of miniature pig were collected through internal jugular vein at 1 to 3 weeks intervals. For preventing experimental effects of the animal's physiological changes, 25 ~ 40 ml blood sample was collected based on the recommended one time bleeding volume and recovery times [25]. For analysis of complete blood counts (CBC), blood chemistry and lymphocyte subset, samples were collected in the EDTA-containing tubes and used for experiment within 6 hours.

Measurement of body length and weight

Both female and male miniature pigs were sacrificed at 9 weeks after transplantation. For histopathologic assessment, 6 kinds of organ tissues (liver, spleen, thymus, lymph node, left and right kidney cortex with medulla and lung) were fixed with 10% formalin and embedded in paraffin. After that, H&E staining was performed. All tissue sections were observed under a light microscope.

All data were analyzed by One-way analysis of variance (ANOVA) using SPSS 23 (IBM), and Tukey's post hoc test was performed for multiple comparisons. The data were represented as means ± standard error (SE). The differences were considered significant when p < 0.05.

Values of body weight and length

After 9 weeks from human MSCs transplantation, miniature pigs were sacrificed and evaluated for histological analysis. According to the results of previous hematological patterns and values of body weight & length, normal physiological and immune status was observed in miniature pigs. Histopathologic examination provided the background for these results. For evaluating immune response in pig, the organs (spleen, thymus and lymph node) were stained with H&E and the structure of organs was identified as normal state (Figure 4). Furthermore, when the human stem cell with scaffold were moved in vivo, the organs (Left kidney cortex, right kidney cortex, right kidney cortex, right kidney medulla, lung and liver) were evaluated to confirm histopathological assessments and showed normal state (Figure 4).

Many animal experiments had been carried out to investigate human MSCs based therapy [1, 3, 4, 5, 6]. In vivo models and studies of preclinical investigation provided strategies for regenerative medicine. However, most studies regarding physiological and immunological status changes caused by human stem cell transplantation were limited to mice. Miniature pigs were suitable animal species because of their similar characteristics to human and therefore several studies had also been reported in this regard [26, 27]. But, the matter of fact is that that it could be much appropriate to check the reliability of such results using miniature pigs, which is still lacking. The purpose of this study was to confirm the reliability of the results of animal experiments by hematologic and histological analysis of miniature pig following human MSCs transplantation.

Mean values of complete blood counts in miniature pigs depending on MSCs transplantation.

Mean values of complete blood counts in miniature pigs depending on MSCs transplantation.

Values are represented by the mean ± SEM. Each group contains 3 miniature pigs (female: 3, male: 3). Tr*: After transplantation. Δ : Out of range data. 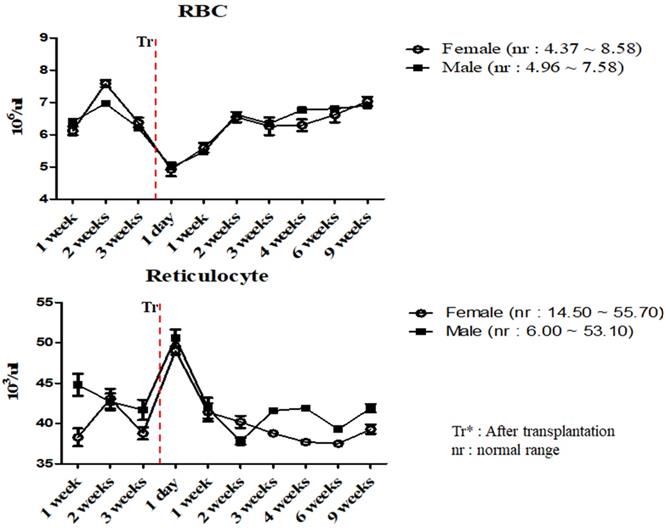 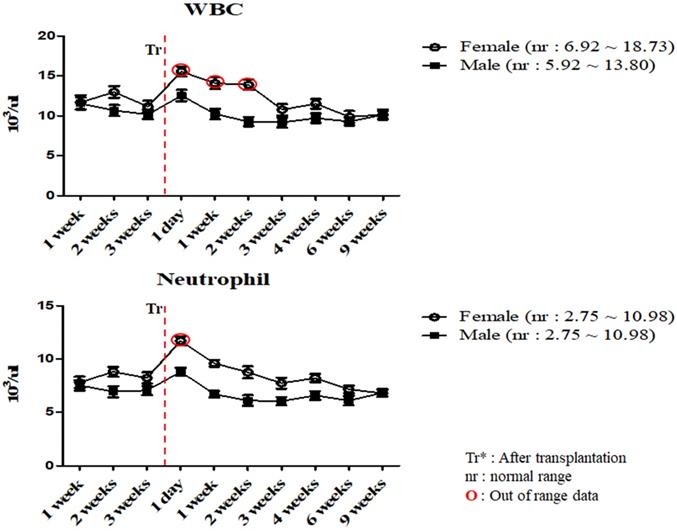 Mean values of serum chemistry test in miniature pigs depending on MSCs transplantation.

Mean values of serum chemistry test in miniature pigs depending on MSCs transplantation.

In accordance with the CBC and serum biochemistry results, changes were discovered in some parameters in MSCs transplanted group and control although most of values remained similar compared to control. Bleeding from invasive surgery for MSCs transplantation caused decreasing of the RBC values and increasing of the reticulocyte temporally within normal ranges [17, 18]. One of the crucial factors in this study was the changing patterns of the WBC and neutrophil values. Leukocytes are essential part of the immune system and play different roles depending on the type and WBC was also clinically useful to determine indicators of infection [19, 20, 23, 28]. Leukocytes could be divided into neutrophil, lymphocyte, monocyte, eosinophil and basophil according to differentiation process, size and shape, especially, neutrophil number is increased after infection or inflammatory reaction [19, 20]. As shown in Table 2 and Figure 2, mean WBC and neutrophil values was increased temporarily in female miniature pigs after MSCs transplantation, however the values were observed as normal over time compared to control group. These results could be explained on the fact that despite the temporary changes after procedure, the immunological changes such as inflammation were not observed. Our studies also indicated that the mean values of blood chemistry parameter of MSCs transplanted group was similar to control groups such as BUN, Creatinine and Osmolality. The BUN and Creatinine were parameters that reflect renal perfusion and kidney filtration [29, 30]. As shown in Table 4, mean values of BUN and Creatinine showed similar pattern. These results revealed that dehydration due to bleeding and stress did not affect kidney function. Additionally, the bleeding which was a decrease in isotonic fluid and dehydration by stress did not affect the osmolality. Overall, results demonstrated that these miniature pigs might be physiologically normal.

Mean values of lymphocyte subset in miniature pigs depending on MSCs transplantation.

Mean values of B lymphocyte and cytotoxic T cell were analyzed on MSCs transplanted miniature pigs. Values are represented by the mean ± SEM of six pigs. Tr: After transplantation. nr: normal range. 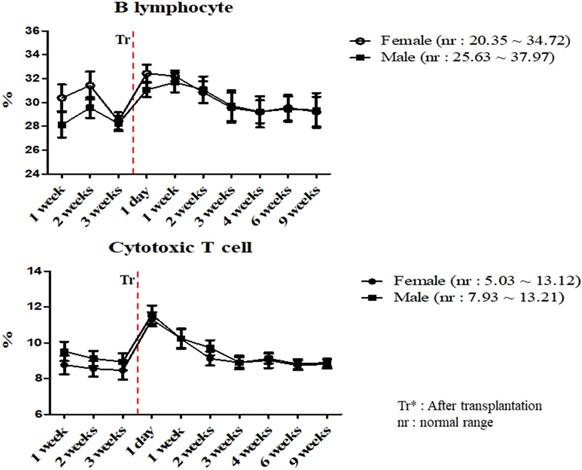 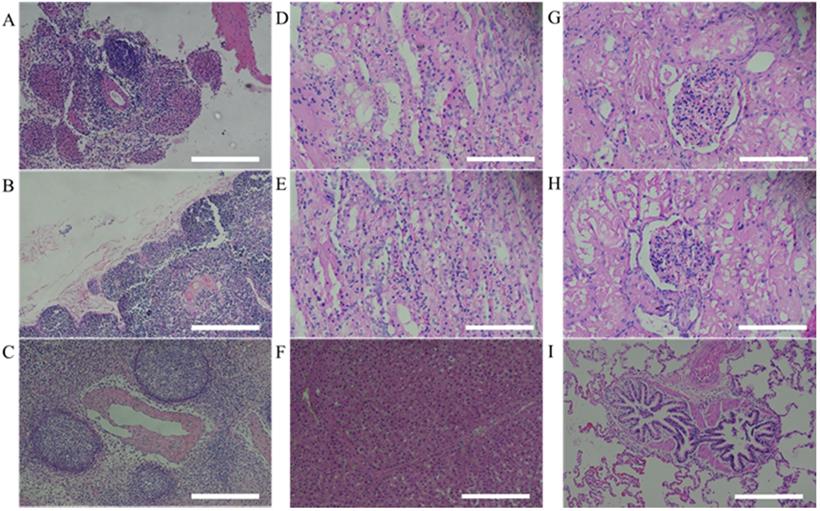 Mean values of body weight and length in miniature pigs depending on MSCs transplantation.

The histopathological analysis of these three kinds of organs evaluated normally, so we determined that the mini pigs were in a normal immune condition. These results indicated that there were no immune rejection reactions by the lymphoid organs when human MSCs were. It had been reported that after transplantation, most MSCs are filtered by liver, kidney and lung [40]. Keeping these things in mind, in the present study, we performed H&E staining of these organs and they did not show any abnormal findings. Therefore, we determined that transplanted MSCs were safely homed to the mandibular bone defect.

In conclusion, we demonstrated that the mean values of WBC, neutrophil and reticulocytes were increased and RBC were decreased after human MSCs transplantation. However, these changes appeared temporarily and were mainly observed within normal ranges, suggesting that it was due to the non-specific reaction of external stress occurred because of the experimental procedures. Furthermore, hematological patterns and histopathological assessment were normal in human MSCs transplanted group compared to control. Taken together, the human MSCs transplanted into miniature pigs did not cause an immunological rejection and normal physiological conditions were observed. These results supported the stability and reliability of pre-clinical studies in mini pigs using human MSCs.

This work was supported by a grant from the National Research Foundation (NRF-2019R1I1A3A01060073) and from Stem Centric Co. Ltd. in the Republic of Korea.

The animal experiments were conducted after getting approval from the Ethics Committee of Gyeongsang National University (GNU-160913-p0047).