Department of Plastic and Reconstructive Surgery, College of Medicine, The Catholic University of Korea, Seoul, Republic of Korea

Pathological cutaneous scars, with aberrant extracellular matrix accumulation, have multiple origins. Antihypertensive medications, such as calcium channel blockers, have been used to treat pathological scars. However, a relationship between angiotensin-converting enzyme (ACE) inhibitors, pathological scars, and blood pressure (BP) has never been reported. Here, we aimed to compare the differences in scar development and the effects of the administration of systemic ACE inhibitor on scar tissue in a normotensive rat, the Wistar Kyoto rat (WKY), a hypertensive rat, and the spontaneously hypertensive rat (SHR). Using an 8-mm punch, we created two full-thickness skin defects in a total of 32 rats (16 WKY and 16 SHR) to obtain a total of 64 wounds. We established control WKY (n = 16), captopril-treated WKY (n = 16), control SHR (n = 16), and captopril-treated SHR (n = 16) groups and started captopril (100 mg/g per day) treatment on day 21 in the appropriate groups. The BP of all groups was measured at 0, 3, and 5 weeks. The scar area was measured by histopathological examination, and scarring was expressed in terms of scar area and fibroblast and capillary counts. The expression of heat shock protein (HSP) 47, type I and III collagens, alpha-smooth muscle actin (α-SMA), Ki67, and vascular endothelial growth factor (VEGF) was investigated using immunohistochemistry. The scar area and fibroblast count were significantly higher in control SHR than in control WKY. The scar area, fibroblast count, and capillary count were significantly smaller in captopril-treated SHR than in control SHR. Immunostaining for α-SMA, Ki67, and VEGF also showed a noticeable decrease in scarring in the treated SHR compared with that in control SHR. Thus, BP affects scar development in a rat model, and an ACE inhibitor is more effective at reducing scars in hypertensive rats than in normotensive rats.

Keloid and hypertrophic scars, which are pathological cutaneous scars, are characterized by prolonged, aberrant extracellular matrix (ECM) accumulation [1]. They are considered dermal fibro-proliferative lesions rather than an inevitable postoperative outcome in patients with high aesthetic expectations [2].

We used a total of 32 male rats (16 male WKY and 16 male SHR (SLC, Nakaizu, Japan)) at the age of 12-13 weeks, weighing 250-350 g. The animals were kept in individual cages in a temperature-controlled room with a 12 h light/12 h dark cycle and were provided food and water ad libitum. All animal experiments were performed to minimize suffering.

The WKY and SHR were anesthetized by an intraperitoneal injection of sodium pentobarbital (40 mg/kg). After shaving the hair on the dorsal surface, two full-thickness excisional wounds were created through the panniculus carnosus on the back using an 8-mm biopsy punch. After hemostasis was achieved by manual compression, the wounds were covered with polyurethane dressing (Tegaderm, 3M Health Care, St. Paul, MN). A total of 64 wounds were examined grossly for signs of infection, desiccation, and epithelialization at 1-day intervals. All wounds were epithelialized on day 14.

A total of 32 rats (8 rats in each group) were euthanized on day 36 after wounding, and a total of 64 tissue biopsies were performed to evaluate inflammatory cell counts and scar areas. Tissue samples (10 mm thick) were collected from the middle region of the wounds. All specimens were fixed in 10% neutral-buffered formalin, dehydrated, embedded in paraffin blocks, cut into 3-µm sections, and stained with hematoxylin and eosin (H&E) and Masson's trichrome stain for examination under a light microscope to measure the scar area, collagen deposition and neovasculature [7, 8, 10].

The severity of the scarring in the tissue specimens was determined using the scar area, fibroblast count, and capillary count. For histopathological examinations, digital images were captured using Leica Application Suite Software LAS V 4.1 (Leica Microsystems, Wetzlar, Germany). The scar area was defined as the area showing the destruction of the standard architecture compared with the surrounding area, as measured by tracing the scar margin using ImageJ software (ImageJ; National Institute of Health, Bethesda, MD, USA) [11]. The mean scar area for each wound was then converted from pixel number to square micrometers, calculated using the ratio of the number of pixels to the scale bar [12]. Blind measurements were performed on the scars, and two values were averaged. The number of fibroblasts in three randomly chosen fields of 1 mm2 was counted under 400x magnification, and the number of capillary lumens per field was counted under 40x magnification by two histologists blinded to the groups.

This study was approved by the Animal Care and Use Committee of Yeouido St. Mary's Hospital, Catholic University of Korea (YEO20141003T).

Statistical analysis was performed using SPSS ver. 18.0 for Windows (SPSS, Chicago, IL, USA). All the data are expressed as the mean ± standard deviation (SD). The scar area, fibroblast count, and capillary count in all of the groups were compared using one-way analysis of variance (ANOVA). HSP47, type I and III collagen, and VEGF expression scores, as well as the Ki67 proliferation index, were compared using the Kruskal-Wallis test, followed by posthoc Bonferroni correction for multiple comparisons. We also used repeated-measures ANOVA to compare the systolic BP between 3 and 5 weeks in all of the groups. P- values < 0.05 were considered statistically significant.

Histopathological analysis revealed larger scar areas, comprising a dense connective tissue, a less organized collagen structure, and many capillary lumens, in the WKY control group than in the captopril-treated WKY group. Compared with the SHR control group, the captopril-treated SHR group showed a focal scar area with less prevalent fibroblasts, loosely arranged collagen bundles, and fewer capillary lumens (Figure 2A-2H). The median scar area differed significantly among all four groups (P < 0.0001). In addition, the scar area was significantly smaller in the wounds of SHR-T and WKY-C than in those of SHR-C. However, the differences between the wounds of WKY-C and WKY-T and WKY-T and SHR-T rats were not significant (Figure 2I and Table 1).

Summary of the histopathological data.

All data are expressed as the mean ± SD.

Statistical significance at P < 0.05 based on an ANOVA followed by a post hoc Bonferroni correction for multiple comparisons. 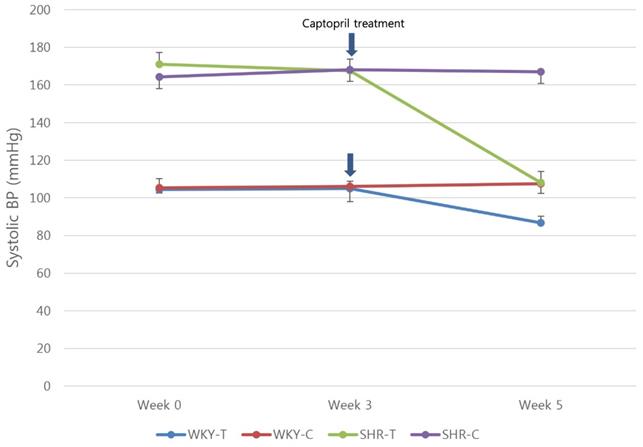 Summary of the immunohistochemical data.

All data are expressed as the mean ± SD.

Captopril Treatment Has No Effect on Collagen I, Collagen III, and HSP47 Expression in Hypertensive Rats In Vivo

This study was conducted to assess scar development and the effect of the ACE inhibitor, captopril, on pathological scars in genetically normotensive and hypertensive rat models. Hypertension affects the profibrotic functional changes in endothelial cells, myofibroblasts, dermal fibroblasts, and mast cells, which form keloid and hypertrophic scars. These functional changes are mediated by inflammation-induced tissue hypoxia and the renin-angiotensin system (RAS) [1]. Recent research has demonstrated that a local RAS is present within healthy skin and plays a vital role in wound repair and tissue reconstruction through Ang II [14, 15], which stimulates proliferation, migration, and matrix production of human dermal fibroblasts [16, 17], as well as in keloid pathogenesis via the activation of angiotensin type 1 receptor (AT1)-dependent signaling pathway [18].

Several recent reports described the effect of the pharmacological antagonism of Ang II by an ACE inhibitor or AT1 antagonist, which are widely used as antihypertensive drugs, in suppressing skin wound repair, hypertrophic scars, or keloid [15, 26]. Nevertheless, few studies have demonstrated the relationship between scar development and hypertension in an animal model. In the present study, we used captopril among the various ACE inhibitors because its scar reducing effect has been determined in previous in vivo studies, and the effect of lowering blood pressure in SHR has also been investigated previously [4, 9, 27]. We determined the relationship between the systemic effect (lowering blood pressure) and topical effect (cutaneous scar reduction). Captopril treatment was initiated after the termination of wound healing to exclude its effect on the inflammatory phase during wound healing. 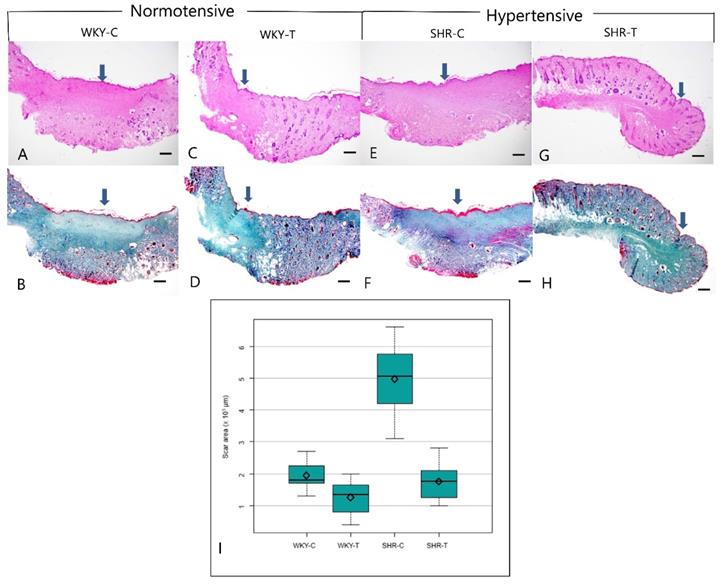 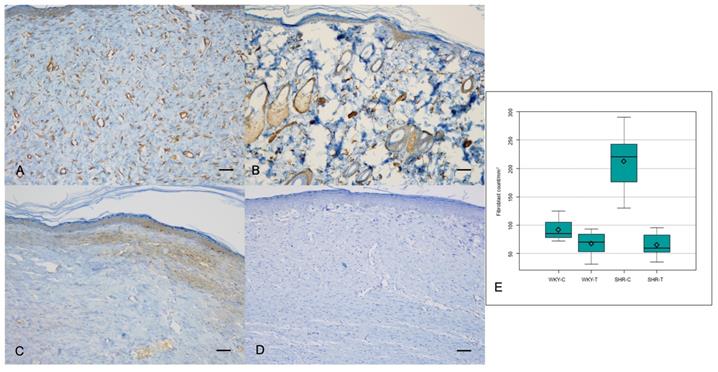 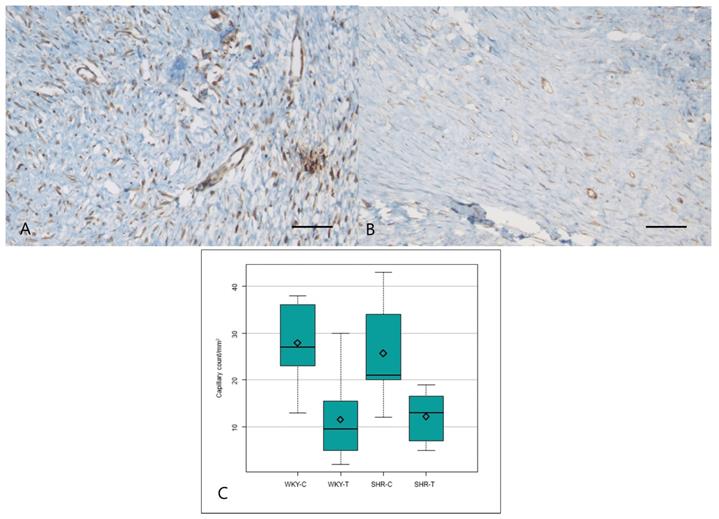 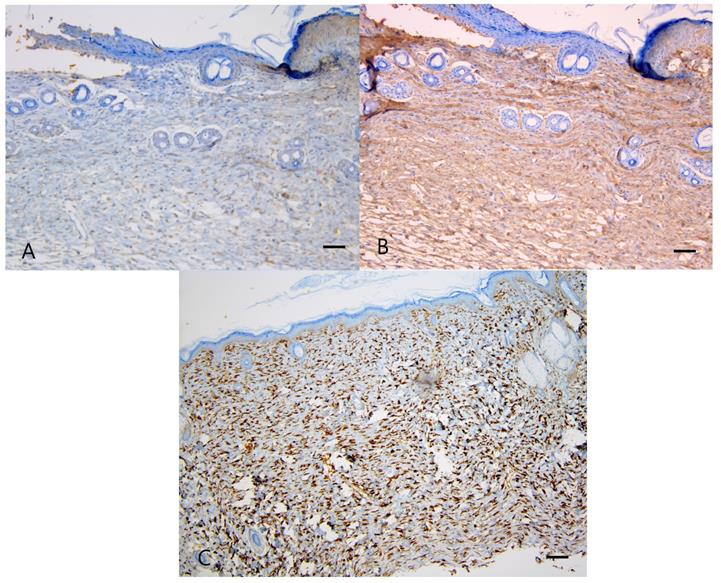 In this study, the scar area, fibroblast count, and capillary count of SHR-T were lower than that of SHR-C in hypertensive rats, while in normotensive rats only the capillary count was significantly lower in WKY-T than in WKY-C. These results suggest that the effect of the ACE inhibitor on scar development was more prominent in the hypertensive rat group than in the normotensive rat group. ACE inhibitor treatment significantly lowered the systolic BP in both SHR and WKY. In hypertensive conditions, however, elevated circulatory Ang II levels might be related to the elevation of local Ang II in SHR.

Next, examining the difference between the control groups of normotensive and hypertensive rats, the scar area and fibroblast count were found to be significantly lower in WKY-C than in SHR-C, indicating that hypertension might be related to the cutaneous scar development in this rat model, which is consistent with other reports [1]. Dermal fibroblasts are mechanosensitive cells that actively interact with their microenvironment, expressed, for example, under increased fluid pressure and shear stress on the cells in the vascular lumen or walls due to hypertension [1]. In this study, the fibroblast count of hypertensive rats was higher than that of normotensive rats. Further studies should examine whether there is a correlation between circulating Ang II levels and the local Ang II type 1 receptor in the scar tissue in SHR.

The immunohistochemical analysis in this study showed that VEGF expression was more prominent in SHR-C than in SHR-T. VEGF is a vascular permeability factor that promotes neovascularization and cell growth [28, 29]. In addition to being a potent endothelial cell-specific cytokine, it is also a mitogenic, chemotactic factor in vitro and an inducer of angiogenesis in vivo [30-32]. Ang II accelerates neovascularization and promotes the release of VEGF and platelet-derived growth factor [15, 33]. The decrease in VEGF expression in SHR-T observed in this study may thus be related to the downregulation of Ang II in SHR-T. HSP47, a 47-kDa heat shock protein, is a collagen-specific molecular chaperone localized in the endoplasmic reticulum that plays an essential role in collagen biosynthesis in skin fibrosis [34]. In this study, the expression of HSP47 and collagen type I and III did not differ significantly among the groups, in contrast to the histopathology results. Protein non-specificity for rat wounds and our semi-quantitative measurement method are among the limitations of this study.

α-SMA is a marker for myofibroblasts and is detected in fibroblasts and vascular endothelial cells [35]. Myofibroblasts play a crucial role in wound contraction and are involved in the remodeling of granulation tissue. However, in cases of excessive scarring and fibrosis, myofibroblasts persist and contribute to excessive collagen production. In a mouse burn model, the level of α-SMA expression was shown to correlate with the severity of scarring [36]. In this study, α-SMA expression was more prominent in SHR-C and WKY-C than in SHR-T and WKY-T, respectively. The Ki67 proliferation index was higher in SHR-C than in SHR-T. Ki67 is a marker for epidermal proliferation [13], and the number of Ki67-positive proliferating keratinocytes was significantly decreased in SHR-T compared to SHR-C. This phenomenon could be related to the inhibition of keratinocyte migration inhibited by angiotensin II receptor blockade [17].

This study had several limitations. First, anesthesia might have affected the plasma renin activity and circulatory Ang II levels in the rats. However, any effect of anesthesia should have disappeared, because we started the captopril treatment 3 weeks after the creation of the wound under anesthesia. Second, the wound healing process in rats is different from that in humans; rats have loose skin and subcutaneous panniculus carnosus; therefore, wound healing occurs via contraction and collagen formation [37]. Consequently, the scars that developed in the rats might not have been pathological. However, the differences in the scar development between normotensive and hypertensive rats and between captopril-treated and control hypertensive rats were significant. We believe that this finding is relevant, although the issue of a "pathological scar" is unresolved. Third, we measured the blood pressure of spontaneously hypertensive and normotensive rats using a tail-cuff system because of its non-invasiveness, according to the previous studies on rat experiments [38-39]. However, the blood pressure measurement of rats using the telemetry system is a more precise and better method than the tail-cuff system.