RNA binding protein (RBPs) dysregulation has been reported in various malignant tumors and plays a pivotal role in tumor carcinogenesis and progression. However, the underlying mechanisms in renal cell carcinoma (RCC) are still unknown. In the present study, we performed a bioinformatics analysis using data from TCGA database to explore the expression and prognostic value of RBPs. We identified 125 differently expressed RBPs between tumor and normal tissue in RCC patients, including 87 upregulated and 38 downregulated RBPs. Eight RBPs (RPL22L1, RNASE2, RNASE3, EZH2, DDX25, DQX1, EXOSC5, DDX47) were selected as prognosis-related RBPs and used to construct a risk score model. In the risk score model, the high-risk subgroup had a poorer overall survival (OS) than the low-risk subgroup, and we divided the 539 RCC patients into two groups and conducted a time-dependent receiver operating characteristic (ROC) analysis to further test the prognostic ability of the eight hub RBPs. The area under the curve (AUC) of the ROC curve was 0.728 in train-group and 0.688 in test-group, indicating a good prognostic model. More importantly, we established a nomogram based on the selected eight RBPs. The eight selected RBPS have predictive value for RCC patients, with potential applications in clinical decision-making and individualized treatment.

In our study, RCC RNA-sequencing and clinical information from The Cancer Genome Atlas (TCGA) database were downloaded to perform a systematic functional study. We used R software packages to select differently expressed RBPs between tumor and normal samples and analyze their functions and molecular mechanisms systematically. We identified some prognosis-related RBPs from RCC patients, which can help us understand the molecular mechanisms of renal cell carcinoma and could be the potential biomarkers for diagnosis and prognosis.

We downloaded the RNA sequencing dates and clinical information of RCC patients from The Cancer Genome Atlas database (TCGA, http://portal.gdc.cancer.gov/), containing 539 RCC samples and 72 normal renal tissue samples. The R language Limma package (http://www.bioconductor.org/packages/release/bioc/html/limma.html) was used to analyze the data and select the differently expressed RBPs. All raw data was preprocessed with the Limma package and excluded genes with an average count value less than 1. The screening standard was: P<0.05, |log2FC)| >1.0.

We submitted the differently expressed RBPs to the STRING database (http://www.string-db.org/) to acquire protein-protein interaction information, and we then used Cytoscape 3.7.0 to construct the PPI network and visualize it. The screening standard was P≤ 0.05.

C2 KEGG gene sets from the Molecular Signatures Database (MSigDB) were used to perform GSEA analysis. The permutation number and recompute time set were both set at 1000. The results should meet our screening criteria (P < 0.05).

The median risk score in each data set was used as a cutoff to compare survival risk between high-risk and low-risk groups, a Kaplan-Meier (KM) curve was drawn. Multivariate Cox regression analysis was used to test whether gene markers were independent prognostic factors. Significance was defined as P < 0.05. All analyses were performed using R 3.4.3.

In this study, we utilized several advanced methods to identify the key prognosis‐related RBPs in RCC patients. The study design was illustrated in Figure 1. The data on RNA sequencing for RCC and corresponding clinical information was sourced from TCGA, with a total of 611 samples: 539 RCC samples and 72 normal renal tissue samples. We used R software packages to analyze the data and select the differently expressed RBPs. We totally analyzed 1542 RBPs [6], and 125 RBPs met our screening criteria (P<0.05, |log2FC)| >1.0), which included 87 upregulated and 38 downregulated RBPs. The expression distribution of these differently expressed RBPs is shown in Figure 2. 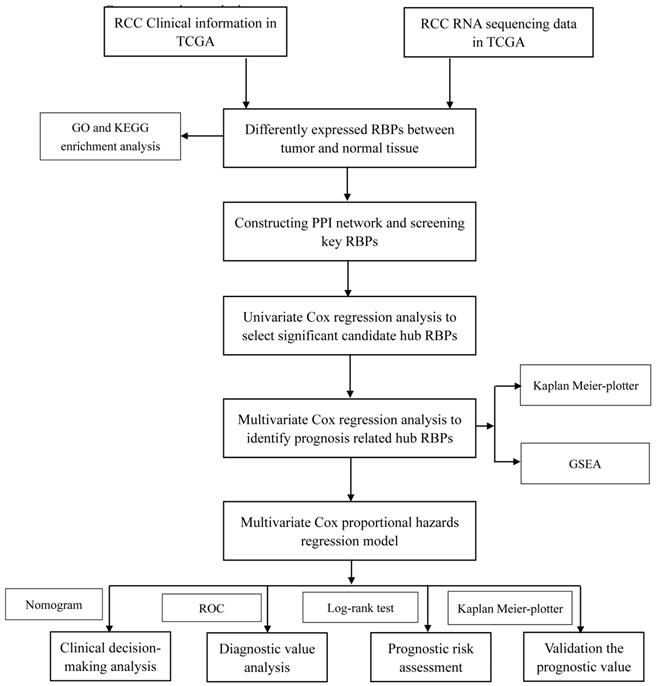 The differently expressed RBPs in RCC. (A) Heat map; (B) Volcano plot. 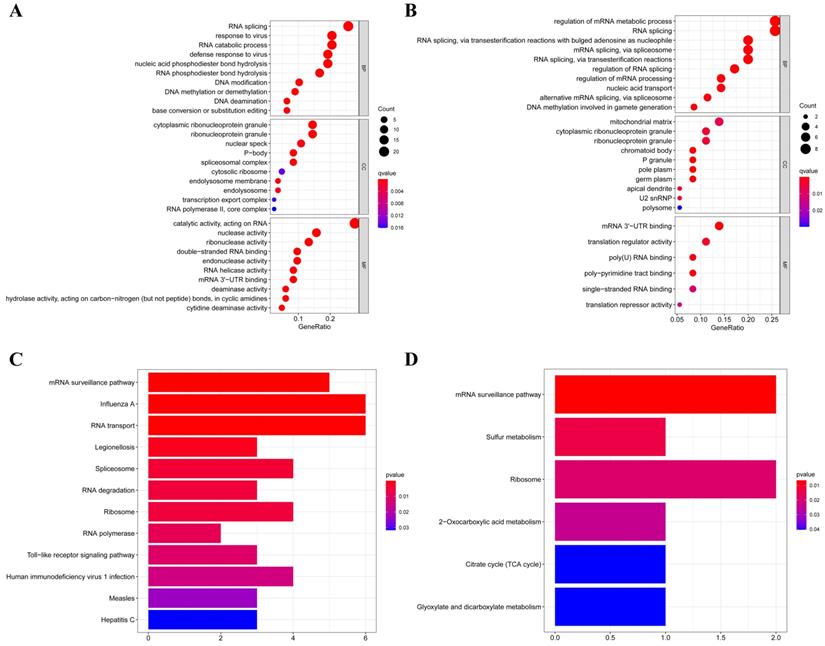 To better understand the correlation and function of these differently expressed RBPs in RCC patients, we built a PPI network by using Cytoscape software and the STRING database, which included 100 nodes and 225 edges (Figure 4A). By using the MODE tool in Cytoscape to process the PPI network, we obtained the most important module which contained 39 nodes and 89 edges (Figure 4B). The RBPs in this module were greatly enriched in ribosome assembly, cytoplasmic translation, regulation of mRNA processing, regulation of RNA splicing, piRNA metabolic process, DNA methylation, meiotic cell cycle and RNA transcription.

From the PPI network, we uncovered 100 differently expressed RBPs in total. By univariate Cox regression analysis, we obtained 30 prognostic-associated candidate RBPs (Figure 5). Then we performed a multiple stepwise Cox regression and selected eight hub RBPs to be independent predictors in RCC patients (Figure 6).

First, we randomly divided the RCC patients into a train-group and test-group. In the train-group, we used the eight hub RBPs selected by the multiple stepwise Cox regression to build the predictive model. Then we used a formula to calculate the risk score of each RCC patient. The formula is as follows:

In order to evaluate the predictive ability of this model, 267 RCC patients were divided into two subgroups according to the median risk score. 133 high-risk patients and 134 low-risk patients were analyzed to perform a survival analysis. The results showed that the high-risk subgroup had a poorer OS than the low-risk subgroup (Figure 7A). Second, we conducted a time-dependent ROC analysis to further test the prognostic ability of the eight hub RBPs. The AUC of the ROC curve was 0.728, indicating a moderate clinical prognostic significance (Figure 7B). The risk score, survival status of patients and expression heat map of the two subgroups are shown in Figure 7C. To prove the accuracy of the risk score model, we used the data of the test-group to perform the same analysis. The result was similar (Figure 7D-F), suggesting that the risk score model is reliable. To explore the relationship of clinical features with our predictive model, we then performed a regression analysis. Univariate regression analysis indicated age, tumor grade, tumor stage and risk score were relevant to OS of RCC patients (Figure 8A). Multiple regression analysis further showed that age, tumor grade, tumor stage and risk score were also independent prognostic factors related to OS (Figure 8B). 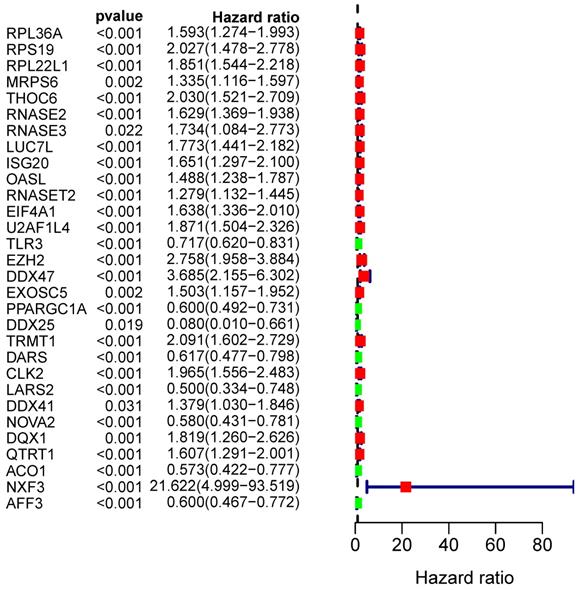 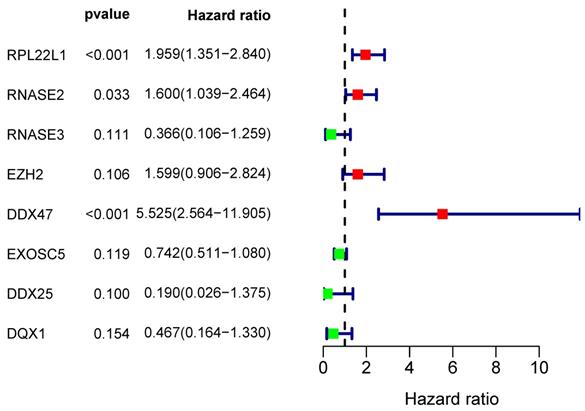 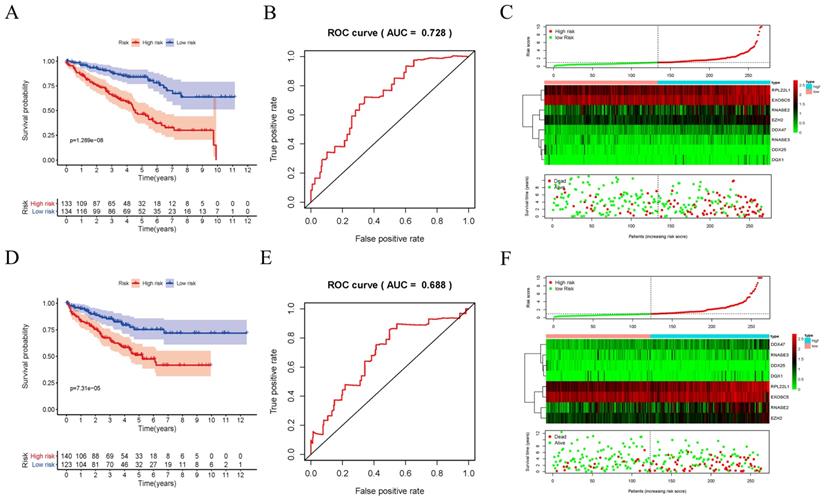 Construction of a nomogram based on Risk Score Model 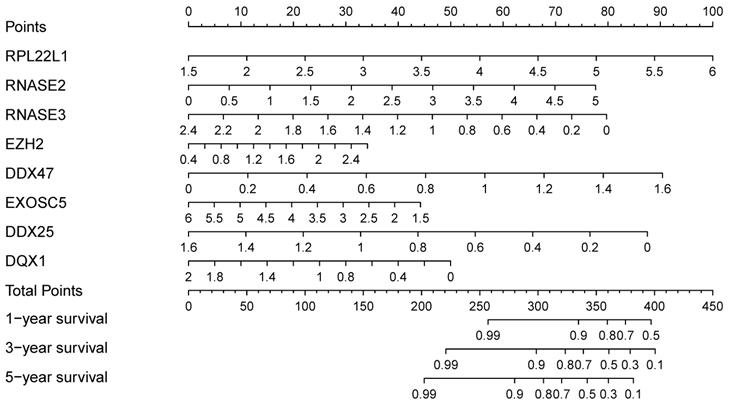 Validation of the prognostic value of hub RBPs in RCC patients by Kaplan Meier-plotter. 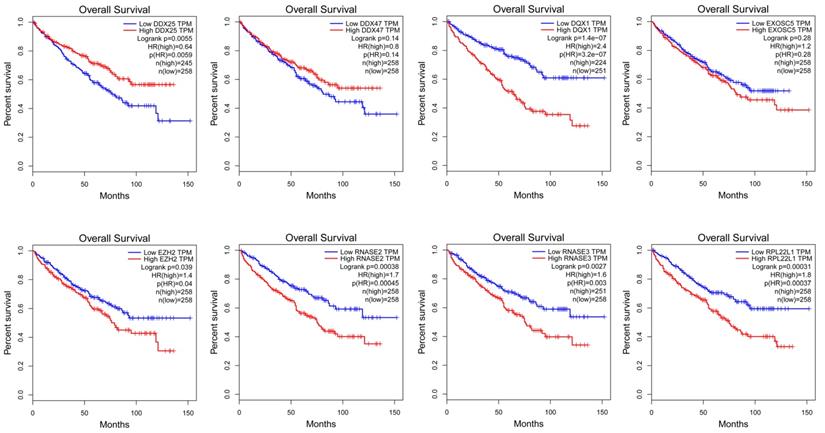 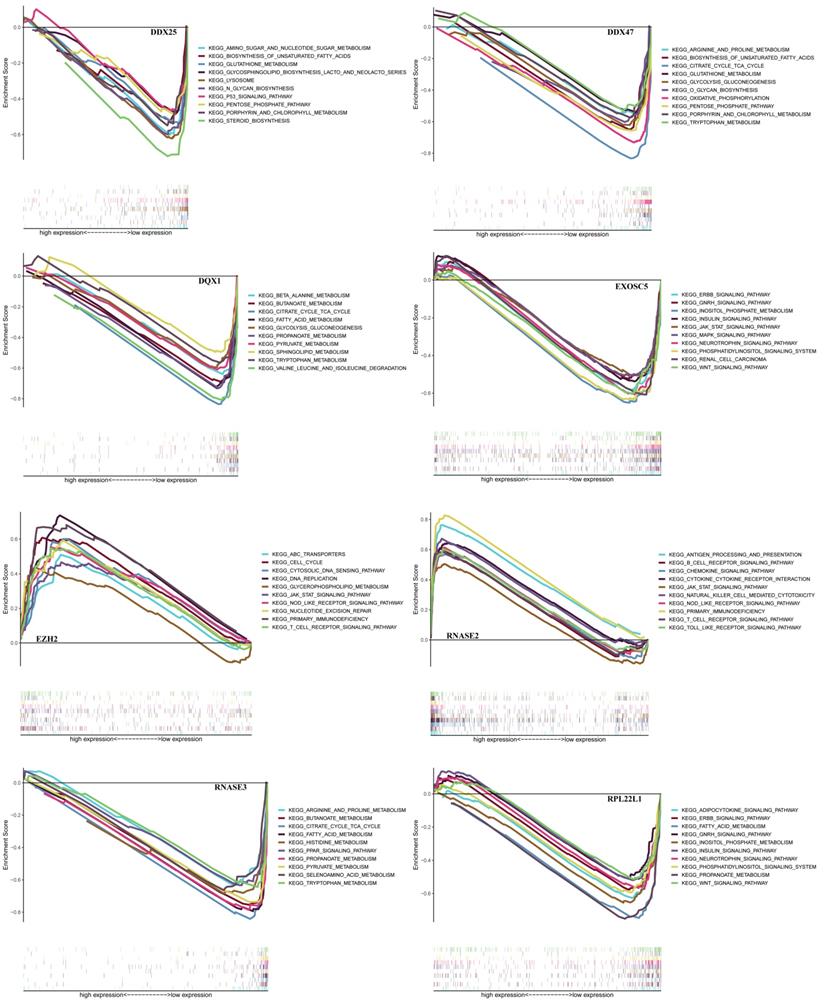 The dysregulated expression of RBPs has been reported to play a pivotal role in tumor carcinogenesis and progression in many malignant tumors [19]. However, the underlying mechanisms are still unclear [19]. In our study, we downloaded the information of RCC patients from TCGA. Though bioinformatics analysis, we selected 125 differently expressed RBPs in RCC between tumor and normal tissue, and we performed a detailed and systematic analysis to explore their functions and pathway enrichment. Moreover, we built a co-expression network and PPI network of these differently expressed RBPs. Then, by univariate Cox regression analysis and multiple stepwise Cox regression, we identified eight hub RBPs and constructed a risk model to predict prognosis. To verify and further explore the prognostic value of our model and expression of hub RBPs, we performed ROC analysis, risk score, survival status of patients, expression heat map and survival analysis. Our findings helped us to establish potential biomarkers for RCC patients' diagnosis and prognosis.

Subsequently, we constructed a co-expression network and PPI network and selected 100 key RBPs, which play a key role in the disease progression. Among these key RBPs, many of them have been studied and found to play the important roles in the development and progression of other tumors via regulating the expression of oncoproteins and tumor-suppressor proteins [19]. Moreover, we used the MODE tool in Cytoscape to get important subnetworks. The results showed that these modules were greatly enriched in the regulation of mRNA processing, RNA splicing, piRNA metabolic processes, DNA methylation and RNA transcription.

Additionally, via univariate Cox regression analysis, survival analyses, and multiple Cox regression analysis, we identified eight hub RBPs (RPL22L1, RNASE2, RNASE3, EZH2, DDX25, DQX1, EXOSC5, DDX47) and built a risk model to predict prognosis of RCC. The ROC curve analysis showed that our model is significant and sensitive, and it will be of value to guide treatment and prognosis for RCC patients. These eight RBPs function either as oncogenes or tumor-suppressor genes in cancers. Through regulating the expression of MGMT and MLH1, RPL22L1 can affect tumor progression and chemotherapeutic drug resistance [23] RNASE2 and RNASE3 are mainly involved in human immune function, and RNASE2 plays an important role in sensing of pathogens by toll-like receptor 8 (TL8) [24]. Hence, researchers have identified that combination analysis of RNASE2 with other 6 immune-related genes has prognostic value in ccRCC [25]. EZH2, the core enzymatic subunits of PRC2, plays a pivotal role in tumor carcinogenesis and progression via modulating many pro-oncogenic and pro-survival signaling pathways [26]. Moreover, the expression of EZH2 significantly increases in RCC tissue than that in normal tissue associated with a poor outcome, and EZH2 promotes sunitinib resistance in RCC through kinome reprogramming [27]. DDX47 is involved in maintenance of genome stability via interacting with FANCD2 to lower R-loop levels [28], and study has revealed that overexpression of DDX47 induces tumor cells apoptosis [29]. DQX1, acting as the methylation-driven genes, is a novel prognostic marker in lung squamous cell carcinoma [30]. EXOSC5 could promotes growth of colorectal cancer through regulating ERK and AKT pathways [31]. Collectively, the studies of these eight RBPs in RCC are rare, and the underlying molecular mechanism is still obscure and deserves further exploration.

Overall, our risk model only needs to detect eight hub genes, and it is economical and acceptable for RCC patients. Our analysis also showed that the eight hub RBPs have their own important biological functions and are associated with patients' prognoses, indicating that they have potential to be used for clinical assistance treatment. However, our study did of course have several limitations. First, our data only comes from TCGA database, and is not validated in clinical patient cohorts. Second, our data is only based on RNA sequencing without verification via other omics data platforms. Lastly, the loss of some clinical information reduces the accuracy of multivariate stepwise Cox regression analysis.

In summary, we have systemically analyzed the expression and function of RBPs in RCC patients and acquired the diagnostic model and independent prognostic factor for RCC patients. To our knowledge, this is the first report on the RBP prognosis-associated model for RCC patients, and our study shows that RBPs could be prognostic markers as well as new targets for RCC patients.

We are grateful to Dr. Michael Strickland (University of California, Los Angeles) for reading an initial draft of this paper. This study was supported by the National Natural Science Foundation of China (No. 81572515, 81472395 and 81672522).