Objective: This study aimed to investigate the roles of MRPL27 in survival from cholangiocarcinoma patients in The Cancer Genome Atlas (TCGA) database.

Staging systems of cholangiocarcinoma is of great importance for providing information on the prognosis and guidance for therapy. Unfortunately, the majority of the current existed staging systems have proven insufficient for selecting of therapeutic options and lacked prognostic accuracy[6]. Hence, there is an urgent need for reliable prognostic indicators that will enable optimal therapeutic allocation and prognostication. Ribosomes are required for protein production, and are involved in the process of cell proliferation, growth and survival[9]. As member of ribosome pathway, MRPL27 might contribute to the carcinogenesis progression in human cancers including cholangiocarcinoma. However, no study has focused on the oncogenic roles of MRPL27 in cholangiocarcinoma.

Patients diagnosed with cholangiocarcinoma from The Cancer Genome Atlas (TCGA) database were included in this study. Transcriptome profiling of MRPL27 with Fragments Per Kilobase per Million (FPKM) standardized were obtained from TCGA (https://portal.gdc.cancer.gov/), and clinical data of cholangiocarcinoma (TCGA, PanCancer Atlas) was downloaded from cBioPortal for cancer genomics (http://www.cbioportal.org/)[10, 11]. VLOOKUP index in EXCEL was used to match the gene expression and clinical data. A total of 36 cases were included in this analysis.

Differences of variables between the individual groups were analyzed using student t test and Mann-Whitney U test based on variables types. Factors associated with the survival were assessed by univariate analysis and multivariate analysis Cox regression. Results were reported as hazard ratios (HR) with 95% confidence intervals (CI). The Kaplan-Meier method with log rank test was used to compare OS and DFS between different groups. Stata software version 16.0 (Stata Corp LLC, Texas, USA) was used. A two-tailed p < 0.05 were considered significant for all tests. 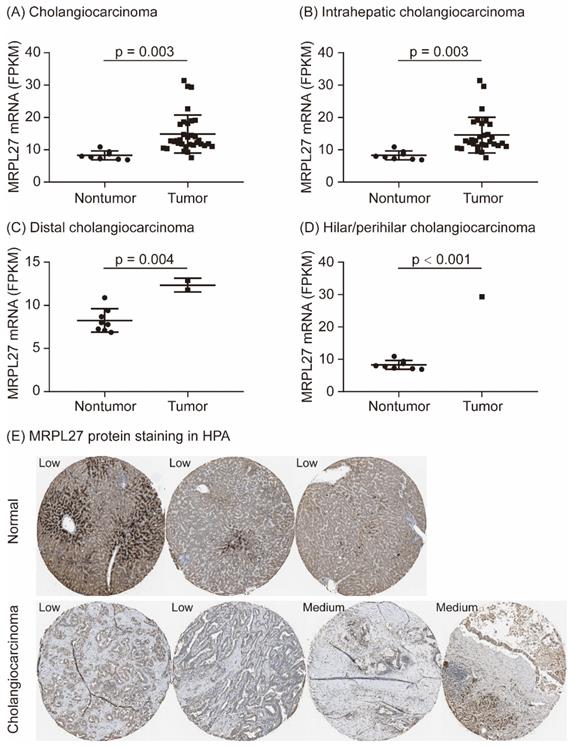 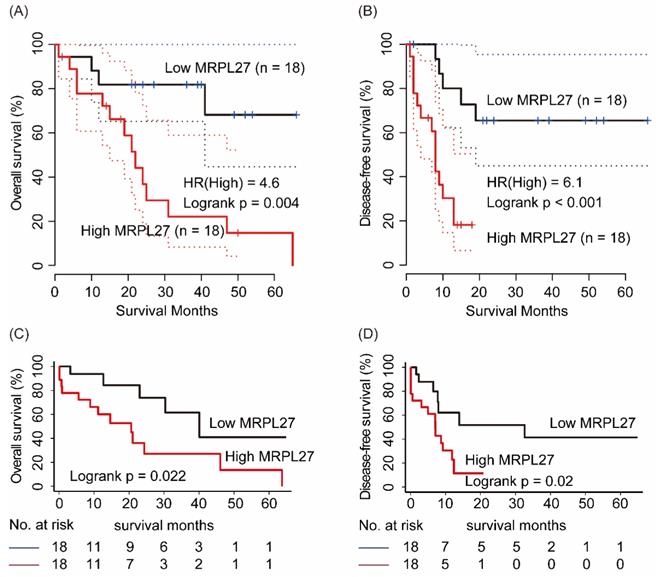 Parameters associated with OS in cholangiocarcinoma patients in TCGA database#

Parameters associated with DFS in cholangiocarcinoma patients in TCGA database#

Enrichment analysis of interacted and similar genes of MRPL27 showed that MRPL27 mainly involved in the processes of mitochondrial translation elongation, respiratory electron transport, ATP synthesis, and inner mitochondrial membrane organization, which were validated both in Metascape (Figure 4A) and GSEA (Figure 4B) databases. In addition, no mutations of MRPL27 were identified in cholangiocarcinoma patients via screening in cBioPortal for cancer genomics (Figure 4C).

Protein-protein interaction in STRING (A) and STITCH (B), similar genes of MRPL27 in cholangiocarcinoma tumors in GEPIA (C). 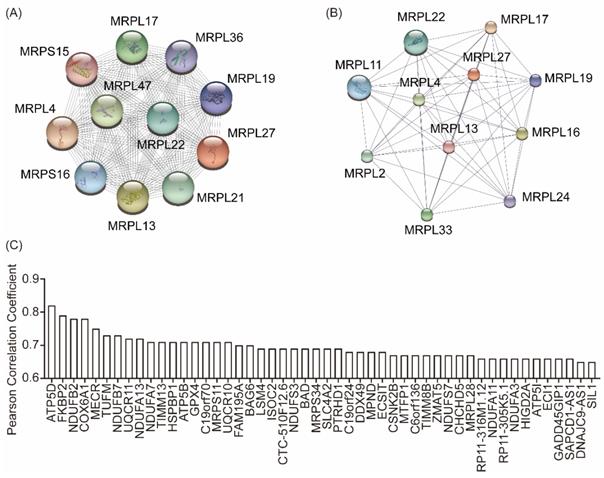 Enrichment of similar genes and interacted genes of MRPL27 in Metascape (A), GSEA (B), and MRPL27 mutation in chilangiocarcinoma from TCGA (C). 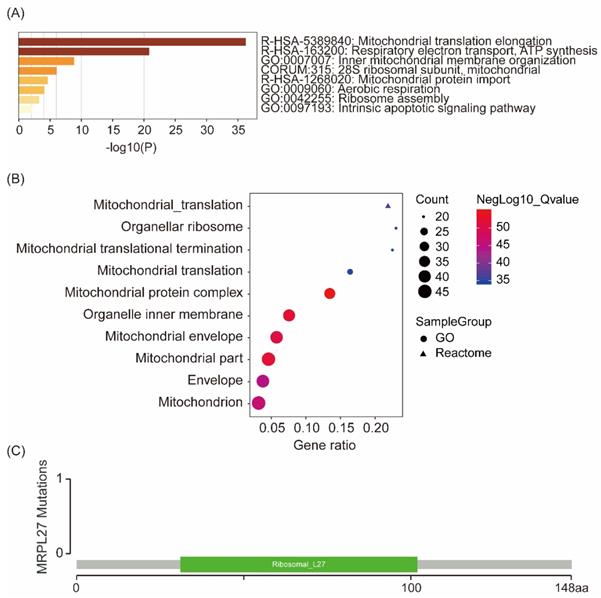 The therapeutic options of cholangiocarcinoma are very limited, resulting in that cholangiocarcinoma has a disappointing prognosis and is almost always irrecoverable owing to its refractory to most currently surgical procedures or medical interventions[18]. Except for tumor locations and pathological subtypes, genetic features also play vital roles in the diagnosis and prognosis in cholangiocarcinoma patients[19, 20]. The huge genetic variations remain the main challenge of effective pharmacological therapy[18]. Currently, several molecular pathways including Notch, receptor tyrosine kinase pathways and PI3K-AKT-mTOR pathway, mutations including KRAS, IDH/IDH2, ROS1, FGFR and BAP1 and cytokines including interleukin-6 were identified dysregulated in cholangiocarcinoma[20].

Ribosome biogenesis serves as one important cellular process that is specially hyperactivated by neoplastic transformation and progression[21, 22]. Unfortunately, members in ribosome pathway were not well illustrated in cholangiocarcinoma. Even previous report uncovered that MRPL27 mRNA was downregulated in liver of the metabolic syndrome rats[23], our analysis indicated that MRPL27 was upregulated in cholangiocarcinoma and associated with unfavorable prognosis including OS and DFS. As a biomarker involved in ribosome production, dyskerin was positive in 56.7% cholangiocarcinoma patients and associated with p53 mutation and a higher proliferative index. Moreover, dyskerin was negatively correlated with DFS in cholangiocarcinoma patients[24]. Located in chromosome X, MRPL27 gene codes for 146 amino acids, YmL27 protein, and involves the large subunit of the mitochondrial ribosome[25-27]. In addition, MRPL27 is involved in mitochondrial translation as well as organelle biogenesis and maintenance[28], in which in line with our results from bioinformatic analysis. Gruschke S et al revealed a complex network of interacting proteins including MBA1, MRPL3, MRPL13 as well as MRPL27 specific to mitochondrial ribosomes. And these proteins constitute ribosomal proteins exclusively found in mitochondria and promote oxidative phosphorylation in mitochondria[29]. Our bioinformatic analysis also indicated that MRPL27 contributed to ATP synthesis, which together with oxidative phosphorylation might involve in the tumor energy support system and contribute to cancer aggressiveness[30-32]. Additionally, no mutations of MRPL27 were screened in cholangiocarcinoma patients in our research. Taken together, we speculated that MRPL27 might be a potential candidate target for cancer therapy including cholangiocarcinoma.

According to our preliminary findings, we cautiously concluded that upregulation of MRPL27 in tumor tissues predicted worse OS and DFS in cholangiocarcinoma patients. MRPL27 mainly involved in the processes of mitochondrial translation elongation, respiratory electron transport, ATP synthesis, and inner mitochondrial membrane organization.

Datasets of the current study are available from the corresponding author on reasonable request.

2. McGlynn KA, Tarone RE, El-Serag HB. A comparison of trends in the incidence of hepatocellular carcinoma and intrahepatic cholangiocarcinoma in the United States. Cancer Epidemiol Biomarkers Prev. 2006;15:1198-203