Background: Bloodstream infection (BSI) are prone to circulation disorders, which portend poor outcome. The central venous-to-arterial carbon dioxide difference (Pcv-aCO2) is a biomarker for circulation disorders, but the prognostic value of Pcv-aCO2 in BSI patients remains unclear. This study was to investigate the association of Pcv-aCO2 with adverse events in BSI patients.

Methods: The patients with BSI between August 2014 and August 2017 were prospectively enrolled. Clinical characteristic and laboratory results were collected. We analyzed the association of the level of Pcv-aCO2 with clinical variables and 28-day mortality.

Conclusion: Pcv-aCO2 may be a simple and valuable biomarker to assessment of 28-day mortality in patients with BSI.

Bloodstream infection (BSI) is common systemic infection in intensive care unit (ICU), affecting 189/100000 patients [1]. It is associated with increased risk of organ failure and mortality, and one-year mortality from BSI is between 8% and 48% [2]. BSI bring a huge financial burden to families and society [3]. Therefore, early accurate identification of patients at high risk of poor outcomes may have an essential role in improving prognosis.

The common pathological change of BSI is microcirculation disorder [4]. Previously, lactate and central venous oxygen saturation (SCVO2) are accepted clinical indicators of organ perfusion and oxygen metabolism [5, 6]. At present, central venous-to-arterial carbon dioxide difference (Pcv-aCO2) as a biomarker of perfusion is gradually recognized. Pcv-aCO2 has reported to be associated with poor prognosis in critical patients suffering from shock, and Pcv-aCO2 is recommended as a biomarker for further resuscitation interventions [7]. In addition, persistently high Pcv-aCO2 during the early phases of resuscitation was a predictor for poor outcomes in patients with septic shock [8, 9]. However, the prognostic role of Pcv-aCO2 in patients with BSI remains to be seen. In this study, we attempted to explore the association between Pcv-aCO2 and 28-day mortality in patients with BSI.

We prospectively enrolled patients with BSI between August 2014 and August 2017 in Geriatric ICU, Guangdong Provincial People's Hospital, Guangzhou, China. Inclusion criterion were as follows: (1) age>18 years; (2) clinical symptoms meet systemic inflammatory response syndrome or hypotension; (3) at least one positive blood culture; (4) only a single bloodstream infection pathogen. Exclusion criteria included: (1) patients refused cardiopulmonary resuscitation or aggressive measures; (2) mismatch of the time of arterial and venous blood gas test. The eligible patients were divided into two groups based on a cut-off value of Pcv-aCO2 of >6mmHg from previous study on septic shock [8]. The present study was approved by the Ethics Committee of Guangdong Provincial People's Hospital (No. GDREC2014006H), and written informed consent was obtained from all included patients or their relatives.

The demographic including sex, age were recorded and Acute Physiology And Chronic Health Evaluation II (APACHE II) score, and Sequential Organ Failure Assessment (SOFA) were calculated when the patients were diagnosed with BSI. The biochemical data, such as Pcv-aCO2, ScvO2, white blood cell (WBC) count, platelet (PLT), procalcitonin (PCT), C-reactive protein (CRP), and lactate were tested when the patients were diagnosed with BSI. We routinely performed arterial and central venous blood gas analysis while taking blood culture specimens. Pcv-aCO2 and ScvO2 were obtained by simultaneous analysis of arterial and central venous blood gases with a blood gas analyzer (ABL 800; Radiometer Medical, Denmark); other demographic and clinical characteristics of enrolled participants were collected by a researcher with the use of an electronic case report form, and then were confirmed by another researcher.

All the patients were followed-up for 28 days by telephone interviews after BSI diagnosis. The primary endpoint was 28-day all-cause mortality.

Statistical analyses were performed by using SPSS 24.0 software (IBM, Armonk, NY, USA). The continuous variables were presented as mean ± standard deviation (SD), and compared using independent sample t-test when they were normally distributed; for non-normally distribution, the Wilcoxon rank-sum test was conducted, and the data presented as median and interquartile range. Categorical variables were presented as a percentage and compared using χ2 or Fisher's exact test. Bivariate correlations were calculated by Pearson's or Spearman's correlation coefficients. Survival curves were depicted by using Kaplan-Meier analysis. Cox proportional hazards regression model was used to analyze the association between the variables and the risk of death. Multivariate Cox regression analysis was performed with the variables whose p-value was less than 0.05 in univariate logistic regression analysis for 28-day mortality. Receiver operating characteristic (ROC) curves were plotted to evaluate the predictive power of Pcv-aCO2 for 28-day mortality. A p-value < 0.05 was considered statistically significant.

Clinicopathological characteristics of patients with BSI

Correlation of Pcv-aCO2 with other parameters

Univariate and multivariate Cox regression analyses of the 28-day mortality

The predictive accuracy for 28-day mortality

The present study demonstrated that increased Pcv-aCO2 at the time of blood culture was independently associated with 28-day mortality in patients with BSI. In addition, Pcv-aCO2>6 mmHg was a valuable predictor of the increased risk of 28-day mortality. In this study, the 28-day mortality was 34.9%, which were higher than previous studies [10]. It might be due to the advanced age of the patients in our study, because age is one of the risk factors for poor prognosis [11]. The other reasons should be considered was more serious patients enrolled in our study. Patients included in this study had higher SOFA and APACHE II score than previous studies [10]. 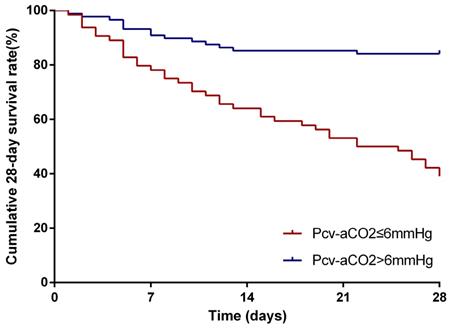 The receiver operating characteristic curves for Pcv-aCO2 levels in predicting 28-day mortality of the patients with BSI. 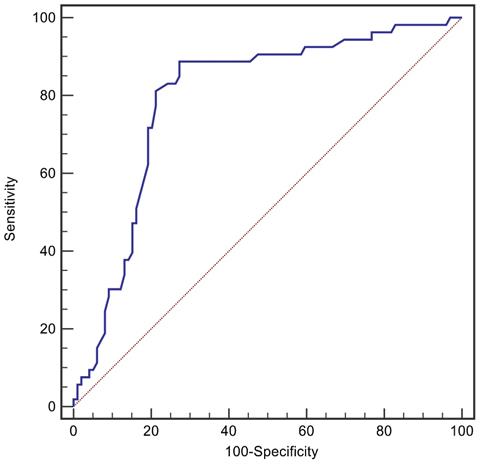 It is well-known that BSI often cause circulatory disorder, which associated with poor outcomes [12]. In recent years, Pcv-aCO2 is considered one of indicator for monitoring of tissue perfusion [13]. A previous study reported that a significant increase in Pcv-aCO2 during cardiac arrest results from cardiovascular stagnation [14]. Similarly, another research showed that Pcv-aCO2 is inversely proportional to cardiac output in animal models of hemorrhage, hypovolemia, and obstructive shock [15-17]. When cardiac output reduce, the blood flow is slow and the elution ability of CO2 is impaired; therefore, more CO2 is accumulated in the tissue, and the Pcv-aCO2 increases as the CO2 diffuses easily and quickly [18]. In the early fluid resuscitation of septic shock, a persistent increase in Pcv-aCO2 suggests a poor prognosis, and monitoring Pcv-aCO2 during early fluid resuscitation is a helpful indicator for assessing the adequacy of tissue perfusion [8, 19]. As an indicator of tissue perfusion, Lactate is the goal of early fluid resuscitation in septic shock [20]. There was a correlation between Pcv-aCO2 and lactate in our study. In Pcv-aCO2 > 6 mmHg group, the lactate level, circulatory disorders and vasopressor used were more, which suggest that Pcv-aCO2 can be an good indicator of tissue perfusion and prognosis.

In severe infections, oxygen supply-demand imbalance often leads to increased mortality [21]. In fact, Pcv-aCO2 monitoring not only can reflect cardiac output and tissue microcirculation perfusion, but also show a balance between tissue oxygen supply and demand, thereby objectively reflecting tissue oxygen metabolism [22]. A study showed that the changes of cardiac output were not consistent with those of Pcv-aCO2 during septic shock, suggesting that hemodynamic changes cannot be used to explain an increase in Pcv-aCO2 in this case, which may be associated with poor tissue oxygen supply and increased oxygen consumption [23]. Kocsi et al [24] found that Pcv-aCO2 is an important indicator to monitor an imbalance between tissue oxygen supply and demand caused by low blood volume. The oxygen supply and demand of tissue can be timely detected by monitoring dynamic changes of Pcv-aCO2 in case of insufficient blood volume.The ratio of Pcv-aCO2 to arteriovenous oxygen contentis difference is a better marker of global anaerobic metabolism than lactate in septic shock patients [25]. Furthermore, we found that Pcv-aCO2 was negatively correlated with SCVO2 which is an indicator of the balance of oxygen metabolism, suggesting that Pcv-aCO2 is an appropriate indicator for tissue perfusion and oxygen metabolism.

The mortality of bloodstream infections caused by different pathogen is different [26]. Furthermore, different pathogen infections may cause different circulation disorders [27], which indicated by Pcv-aCO2. Since Pcv-aCO2 can reflect tissue perfusion, it may be used for the identification of BSI pathogens. As we know, PCT plays an important role in the diagnosis of BSI [28]. It helps identify pathogens and guides the choice of antibiotics [29]. In this study, Pcv-aCO2 and PCT were found to be significantly correlated, suggesting that Pcv-aCO2 may contribute to the identification of pathogens. Moreover, we found the pathogen distribution was different in different groups presented based on the level of Pcv-aCO2, and there was more GN bacteria infection in the higher level of Pcv-aCO2 group. This shows that Pcv-aCO2 can provide a clue to identify pathogens and predict outcomes.

Additionally, we found that Pcv-aCO2 has a significant correlation with SCVO2, lactate, PCT, CRP, SOFA and APACHE II score in patients with BSI. PCT and CRP plays an important role in the early diagnosis and prognosis of BSI patients [30, 31]. SCVO2 and lactate guides early fluid resuscitation can effectively predict the prognosis of patients with sepsis [32, 33]. Pcv-aCO2, SCVO2, and lactate are taken as important indicators for treatment and prognosis of sepsis [34]. In our study, the patients with different levels of Pcv-aCO2 showed significant differences in SCVO2, lactate, PCT, PLT, SOFA, APACHE II score, and prognosis. The use of mechanical ventilation, vasopressor, and CRRT were significantly more in Pcv-aCO2 >6mmHg group than those in Pcv-aCO2 ≤6mmHg group. Therefore, Pcv-aCO2 can properly reflect the illness severity of the patient. We also further analyzed the association between Pcv-aCO2 and the risk of death by using Cox regression analysis, which indicated that Pcv-aCO2 was an independent risk factors for 28-day mortality. After that, ROC curves were plotted to evaluate the predictive power of Pcv-aCO2 for the occurrence of 28-day mortality. We found that the Pcv-aCO2 is an important predictive factor for 28-day mortality in patients with BSI.

This was a retrospective analysis based on prospectively collected data. There are several limitations in this study. One limitation is that there was no dynamic monitoring of Pcv-aCO2, that may ignore the impact of different treatments on clinical outcomes. In addition, the use of basic drugs, especially sodium bicarbonate, in patients during the study was not fully clarified, which may affect the accuracy of the results of Pcv-aCO2 monitoring. Moreover, this is a single-center study, that included limited research samples, therefore further multi-center large-scale studies need to be conducted.

Our results demonstrated that increased Pcv-aCO2 while blood culture was an independent predictor of 28-day mortality in patients with BSI, even after adjusting a previous risk model. Furthermore, patients with Pcv-aCO2 greater than 6mmHg were more likely to have poor outcomes. The use of Pcv-aCO2 as a prognostic marker provides valuable information for risk stratification.

1. Laupland KB. Incidence of bloodstream infection: a review of population-based studies. Clinical microbiology and infection: the official publication of the European Society of Clinical Microbiology and Infectious Diseases. 2013;19(6):492-500

5. Chertoff J, Chisum M, Garcia B, Lascano J. Lactate kinetics in sepsis and septic shock: a review of the literature and rationale for further research. Journal of intensive care. 2015;3:39