Objective: We sought to investigate the possible association of a wide QRS-T angle on the surface EKG and myocardial fibrosis on contrast-enhanced cardiovascular magnetic (CMR) imaging in patients with hypertrophic cardiomyopathy (HCM).

Background: Risk stratification in HCM patients is challenging. Late gadolinium enhancement (LGE) visualizes myocardial fibrosis with unique spatial resolution and is a strong and independent prognosticator in these patients. The QRS-T angle from the surface EKG is a promising prognostic marker in various cardiac pathologies.

Methods: 70 patients with HCM obtained a standardized digital 12-lead EKG for the calculation of the QRS-T angle and underwent comprehensive CMR imaging for visualization of fibrosis by LGE. Patients were divided into groups according to the absence or presence of fibrosis on CMR.

Conclusion: There is a strong association of a wide QRS-T angle and myocardial fibrosis in patients with HCM.

Hypertrophic cardiomyopathy (HCM) is the most common genetic cardiac disease characterized by left ventricular hypertrophy [1]. Although the majority of patients are asymptomatic, a small but significant number of patients are at risk of sudden cardiac death (SCD) with a mortality rate of 0.5 to 2% per year [2]. HCM is a common cause of SCD in adolescents in general, and competitive athletes in particular [3,4]. For these reasons identification of patients at risk and prophylactic defibrillator placement is of utmost importance. Clinical risk factors include massive left ventricular hypertrophy (LVM) of ≥ 30 mm, abnormal blood pressure response to exercise, a family history of HCM with SCD, unexplained syncope and non-sustained ventricular tachycardia on Holter monitoring. Unfortunately the prognostic yield of these risk factors for primary prevention alone or in combination (score) is low [5,6]. Late gadolinium enhancement (LGE), however, visualizes myocardial fibrosis with unique spatial resolution and is a strong and independent prognosticator in these patients [7]. The QRS-T angle can be easily calculated from every routine digital surface EKG and has shown its prognostic potential in various clinical settings [8,9].

We sought to investigate the association of fibrosis (LGE), the morphologically substrate of life-threatening arrhythmias in HCM, and the QRS-T angle a simple prognostic parameter from routine EKG.

We consecutively enrolled patients with known HCM admitted for further risk stratification by CMR to the CV Imaging Section of our Department of Cardiology and Angiology at Elisabeth Hospital Essen Germany. HCM was defined by the presence of left ventricular hypertrophy with an end diastolic septal thickness of 13 mm or more, occurring in the absence of secondary causes such as hypertension, aortic valve stenosis or phenocopy conditions (e.g. storage disease, skeletal myopathy). A standardized 12-lead digital EKG using a Schiller Cardiovit AT 102 plus® was recorded at a speed of 50 mm/s speed with 10mm/mV for the limb and precordial leads. Computerized values of QRS and T-wave axis were automatically given by the Schiller AT 102 plus® software. The frontal QRS-T-angle was calculated as the absolute difference between the frontal QRS- and frontal T-wave axes and expressed as absolute values [10].

LV function was analyzed by outlining epicardial and endocardial borders on the short axis cine sequences. Left ventricular volumes and ejection fraction were derived from contour summation. Maximum wall thickness was evaluated in all end-diastolic short axis cine images. The extent of late gadolinium enhancement was assessed on short axis contrast images by planimetry of hyperenhanced pixels with a signal intensity of 2 standard deviation above normal remote myocardium, calculated by summation of disc method and expressed as percent of total left ventricular mass.

Continuous variables are presented as mean ± standard deviation and compared with the two-way ANOVA test. Categorical variables are presented as numbers and percentages and compared with the chi-square test. Mean QRST angle with 95% confidence interval are presented as a Box-Plot-diagram (Figure 2). Differences between groups were analyzed by the two-way ANOVA test. Univariate predictors of the presence of myocardial fibrosis on contrast CMR were analyzed using the chi-square test and expressed as hazard ratio (HR) with 95% confidence interval (CI). Multivariate binary logistic regression was performed to identify independent predictors of myocardial fibrosis on contrast CMR. All variables with an univariate p-value <0.05 were included in the final multivariate model. Results of the binary logistic regression model are presented in the same way as the variables in univariate analysis. The correlation between the QRS-T angle and the extent of fibrosis in CMR (fibrosis in percent of LV mass) was tested by pearsons correlation coefficient. All reported p-values are two-sided and a p-value <0.05 was considered statistically significant. All statistical analyses were performed with IBM SPSS Statistics version 26.0 (IBM Corp., Armonk, N.Y., USA).

There were no differences with regards to age, gender, NYHA class and ejection fraction. Patients with myocardial fibrosis had greater maximum wall thickness (21.9±9.1 vs. 17.0±2.8; 0.009). There were no differences in QRS-T angle for each single clinical risk factor (syncope of unknown origin, massive left ventricular hypertrophy ≥30 mm, non-sustained ventricular tachycardia, family history of SCD, LVOT obstruction) between HCM with and without fibrosis (Table 1). As the number of risk factors increases, the QRS-T angles increase numerically between groups but missed significance niveau (p=0.881) (Figure 2). 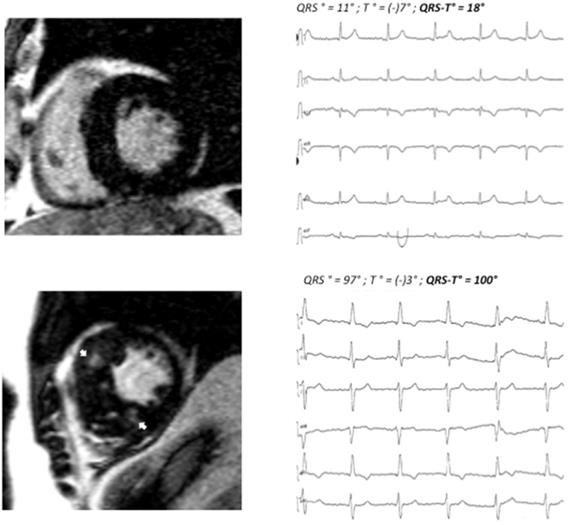 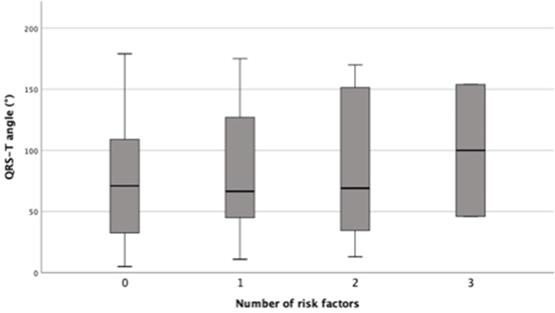 Predictors of myocardial fibrosis on CMR

Our study shows that in a population of patients with HCM fibrosis visualized by contrast-enhanced CMR is associated with a wide frontal QRS-T angle on the surface EKG.

Late gadolinium enhancement visualizes HCM with myocardial fibrosis, the border zones of which reflect the morphological substrate for the re-entrant pathways of ventricular tachycardias. Early CMR studies were able to demonstrate a correlation of myocardial fibrosis on contrast CMR and ventricular tachycardia [21,22]. More recently the presence and extent of late gadolinium enhanced has been related to outcome in a few studies [23,24]. In a group of 1293 HCM patients and a median follow-up of 3.3 years Chan et al. demonstrated a 2-fold increase in SCD for a LGE of ≥15% of LV mass [25].

Shi et al. found that in 66 patients with reduced LV function before ICD placement LGE positive patients had a larger QRS-T angle [26]. However and to the best of our knowledge this is the first study about the association of fibrosis CMR and QRS-T angle in HCM.

In our study 24 of 25 (96%) patients with QRS-T angle ≥90° had myocardial fibrosis on CMR, whereas 26 of 45 (58%) patients with QRS-T angle <90° did not display fibrosis. Overall, the extent of fibrosis increased with increasing QRS-T angles on ECG. However, several limitations of our study have to be taken into account. Our study is retrospective analysis in a small patient group, no advanced CMR tissue mapping techniques were used and follow-up was not performed.

21. Adabag AS. et al. Occurrence and frequency of arrhythmias in hypertrophic cardiomyopathy in relation to delayed enhancement on cardiovascular magnetic resonance. J Am Coll Cardiol. 2008;51:1369-74