Objectives: Currently, diabetes mellitus (DM) and chronic obstructive pulmonary disease (COPD) have proven to be risk factors for each other. This study aimed to determine the risk relationship between COPD and five common oral medications for DM among patients with DM.

The relationship between diabetes mellitus (DM) and chronic obstructive pulmonary disease (COPD) has currently been confirmed.1,2 The literature has also reported that the risk of death in patients with COPD and DM is higher than that in patients with general COPD.3 Several medicines have yielded satisfactory results in the treatment of COPD. Potassium channel modulators can effectively dilate the bronchi, reduce cough and mucus production, and inhibit tracheal inflammation4. A corresponding study was also conducted on oral medicines for DM. The use of metformin was not related to the deterioration of COPD, but the concentration of plasma lactic acid slightly increased in patients in a statistically significant manner.5 Studies have also demonstrated that metformin can reduce mortality in patients with DM and in those with COPD and DM.3

The NHIRD is a claims database covering 98% of the population in Taiwan. The data are derived from the National Health Insurance programme implemented by the National Health Research Institutes. The Taiwan Longitudinal Health Insurance Database 2010 (LHID 2010) consists of a sample of 1 million claims randomly drawn from the NHIRD. No significant difference was observed in the statistical age, gender, annual births, and average insured amount. The strength of this database for research purposes hinges on its large sample size and vertical nature.6 It provides information on patient characteristics, medical service, hospital drug compensation, general practice, community pharmacy, and International Classification of Diseases, Ninth Revision, Clinical Modification (ICD-9-CM) diagnostic codes. All NHIRD applicants must be researchers or clinicians in universities, research institutions, or hospitals. The data form NHIRD must be used for research purposes only. All applications should be reviewed by peer experts to ensure the rationality of the research. Ethical approval for this research was obtained from the institutional review board (IRB) of Chung Shan Medical University (CS2-15106).

Patients with DM were identified according to the ICD-9-CM code 250, A181. The identification of patients with COPD was conducted using ICD-9-CM codes 490.xx-496.xx. A patient with DM or COPD with at least one hospital admission or three or more outpatient claims was considered to be newly diagnosed as having DM or COPD. The index date was the date of DM diagnosis between 2008 and 2013, and the end point was the date of COPD diagnosis. Exclusion criteria were as follows: (1) missing data including gender and residential area, (2) patients younger than 20, (3) end point before the index date, (4) patients diagnosed as having DM or COPD before 2008, (5) and less than 90 days between the index date and the end point. The patients who used oral medication were defined as cases. We randomly selected individuals not using oral medicine, and we gender-matched, age-matched, and index date-matched them with the patients from the case group to form the control group. There were 1,028 and 1,028 controls.

Based on the Anatomical Therapeutic Chemical classification system, we divided patients between biguanides, α-glucosidase inhibitors, sulphonylureas, meglitinides, thiazolidinediones (TZDs), and no oral medicine use for DM. We excluded patients who used more than one medication or were treated with insulin during the follow-up period. Patients having taken medicine for at least a month were included in the study.

The chi-square test was used to analyse the category variables between the case and control groups. A two-tailed test was used to compare the continuous variables. Univariate and multivariate stratified Cox regression models were subsequently used to calculate the hazard ratio (HR) and 95% CI. Multivariable models were adjusted for COPD-related comorbidities, gender, age, low income, and urbanisation level.8 A further analysis of the risk relationship between users of oral medicine for DM and their controls was conducted. Statistical analyses were performed using the SAS 9.3 software package, and P < 0.05 was considered statistically significant.

From 1 January 2008 to 31 December 2013, a total of 1,028 oral medicine users were compared with 1,028 controls. The descriptive demographic data namely age, gender, income, urbanization level, and comorbidities are presented in Table 1. Patients taking oral medicine were compared with their controls. No difference existed in age and gender. Patients were mostly male (55.88%) and 57 years old on average. There were more patients with a low income in the case group (50.58%) and more patients with a non-low income in the control group (50.88%). No difference was observed between the case and control groups. The patients generally lived in moderately urbanized areas (cases: 29.67%, controls: 30.64%).

For further analysis, we compared the case group to the control group. Table 3 indicates that, apart from the α-glucosidase inhibitor users (crude HR: 1.718, 95% CI: 1.052-2.807; adjusted HR: 2.295, 95% CI: 1.304-4.038), no statistically significant differences were observed among the users of other medicines. A Kaplan-Meier curve was also used for analysis (Fig. 2). Only α-glucosidase inhibitor users had a significantly higher incidence of COPD than did the controls (log-rank test, P = 0.025). 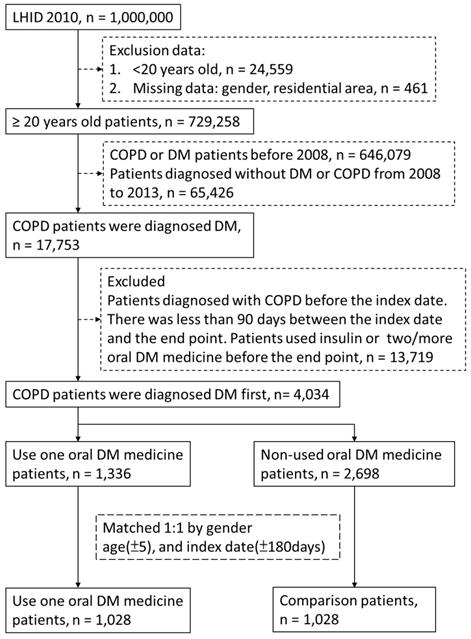 Basic characteristics of the study participants from 2008 to 2013.

Hazards ratios of COPD with diabetes and compare with oral treatment medicine. 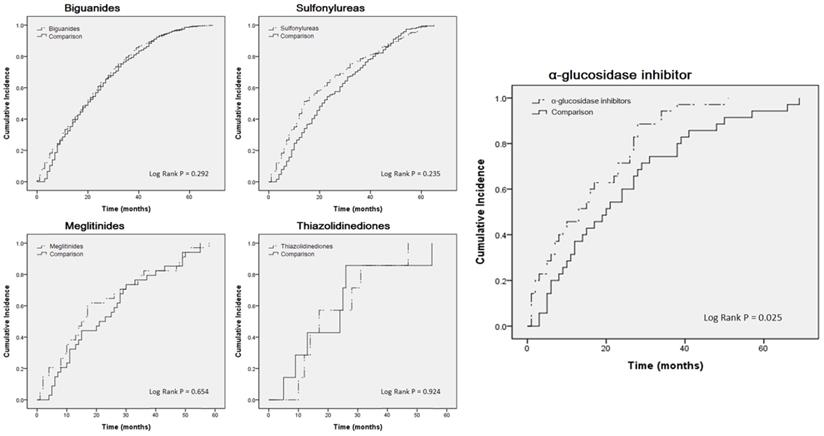 In this study, patients with DM using α-glucosidase inhibitors had a higher risk of developing COPD than those using other oral medicines. Sulphonylureas bind to and shut down the ATP-sensitive potassium channel on the cell membrane of the pancreatic beta cell, and they prevent the potassium from depolarising by blocking it.9 In turn, the fusion of insulin particles with the cell membrane increases, and so does the secretion of mature insulin. The potassium channel has been proven to effectively alleviate the symptoms of COPD, such as decreased airway hyper responsiveness, bronchiectasis, decreased cough, and decreased mucus production as well as inhibition of airway inflammation and remodeling.10 Therefore, closing the potassium channel may cause COPD to worsen. One of the sulphonylureas, glyburide, which binds to (+)-[3H] isradipine, causes pathological changes in the cardiopulmonary structure and function of rats with monocrotaline-induced pulmonary hypertension. This evidence suggests that sulphonylureas had a tendency to aggravate lung injury and related diseases such as COPD. Our results reveal that sulphonylureas were trending towards the development of COPD, but the statistics were nonsignificant. The mechanism of action of meglitinide was the same as that of sulphonylureas, that is, shutting down the ATP-dependent potassium channel.11 In contrast to sulphonylureas, meglitinide has a fast onset and a short duration of action. Compared with those caused by sulphonylureas, the side effects of hypoglycaemia and weight gain caused by meglitinide are relatively mild.12 This may also affect patients with COPD because of the inhibition of the potassium channels. Our results indicated that patients who used meglitinide did not face a risk of COPD; instead they exhibited a decreasing trend compared with their matched group. Studies have demonstrated that for patients with DM, repaglinide can replace meglitinide and treat early cystic fibrosis-related diseases.13 Therefore, it may also be useful in the treatment of COPD. However, the detailed pathological relationship requires clarification.

One of the biguanides, metformin appears to be irrelevant for the treatment of COPD, regardless of whether the patient has diabetes.14,15 However, studies have demonstrated that metformin can effectively inhibit the mortality of patients with COPD and the development of COPD.16, 17 Therefore, whether biguanides inhibit the development of COPD remains to be discussed. In our results, there was no significant difference in the risk of COPD between biguanides cases and controls. Patients with COPD and DM who were exposed to TZDs had a small but significant risk of acute exacerbations of COPD.18 TZDs exert antidiabetic effects by activating the mechanism of the γ isoform of the peroxisome proliferator-activated receptor (PPARγ) (nuclear receptor) and expression of PPARγ in alveolar macrophages, an in vitro alveolar macrophage model and in vivo associated with COPD Animal model studies have displayed the potential to fight inflammation.19 However, studies have also indicated that the long-term use of TZDs in patients with type 2 diabetes causes pneumonia or lower respiratory tract infections as well as severe pneumonia or lower respiratory tract infections. The risk is increased.20 TZDs also increases the risk of heart failure (HF)21 and HF is often highly correlated with COPD.22 In our results, TZDs were not associated with COPD in patients with DM.

In the analysis of multiple population studies, poor education systems, low-income families, and low composite socioeconomic status (SES) indices were associated with individuals with COPD whose annual income is below the minimum wage in the United States.27 It have a much greater impact on smoking-related diseases, which is the same as ours.28 In Poland, 8.5% of men and 4.9% of women have symptoms of chronic airflow obstruction. Livestock farmers have an increased risk of chronic bronchitis, COPD, and reduced forced expiratory volume in 1 second (FEV1).29 Exposure to mineral dust by working in the soil has also been suggested to result in COPD.30 This was also confirmed in our results. Interestingly, among the patients in the case group, those with DM with high blood lipids or cardiovascular disease had a lower risk of COPD. Studies have demonstrated that patients with hyperlipidaemia and COPD experience lung hyperinflation and airway obstruction less often than patients without hyperlipidaemia, but the effects of the drug need to be clarified.29 In fact, α-glucosidase inhibitors can effectively reduce triglycerides and increase HDL; they can also inhibit the risk of cardiovascular disease32 Moreover, biguanides and TZDs effectively reduce the risk of cardiovascular disease.33,34 But, the risk of heart failure is increased by TZDs.21 However, the relationship between the risk of cardiovascular disease and anti-diabetic agents including sulphonylureas and meglitinides are not clear.35 At present, we also found that there are more patients using biguanides due to the lower risk of cardiovascular disease. Therefore, we further compared various drug users with their controls, but the results were similar.

There are several limitations to this study. We did not have a clear understanding of the lives or exercise habits of patients, for example, their cigarette smoking habit. We also could not accurately obtain the actual values of blood sugar levels, FVC, and FEV1 in patients with diabetes. Although we did not directly track the severity of diabetes and COPD from NHIRD could not directly track patients, adjusted these comorbidities of COPD for indirectly explain the severity. These comorbidities present high-risk factors for COPD. Despite the large sample size, the number of participants for whom a comparison between several medicines could be made remained limited after strict screening and matching. Especially for patients with DM who used TZDs, the result was unexpected. For other users of oral medicine for DM, we believe that there is credible by adjustment and matching.

12. Guardado-Mendoza R, Prioletta A, Jiménez-Ceja LM, Sosale A, Folli F. The role of nateglinide and repaglinide, derivatives of meglitinide, in the treatment of type 2 diabetes mellitus. Arch Med Sci. 2013;9:936-943

21. Hernandez AV, Usmani A, Rajamanickam A, Moheet A. Thiazolidinediones and risk of heart failure in patients with or at high risk of type 2 diabetes mellitus: a meta-analysis and meta-regression analysis of placebo-controlled randomized clinical trials. Am J Cardiovasc Drugs. 2011;11:115-128