Purpose: The role of heat shock protein 70 (HSC70) in the progression of clear cell renal cell carcinoma (ccRCC) is unclear. This study explored the effect of the HSC70 on the survival of ccRCC patients.

Renal carcinoma is one of the most common urological malignancies and accounts for 3% of all tumors [1]. The incidence of renal carcinoma has been on the increase worldwide [2]. Despite many advances in cancer diagnosis and treatment in recent decades, especially improved imaging techniques and operation procedures, the strategies for treating renal cancer remain limited owing to resistance against chemotherapy and radiotherapy [3]. The high probability of tumor recurrence and metastasis results in patient poor outcomes in renal cancer [4]. The mechanisms underlying renal cancer metastasis remain unclear. Thus, there is an urgent need to elucidate the molecular mechanisms underlying renal cancer tumorigenesis and to develop novel therapeutic strategies, including treatments aimed at specific molecular targets, to reduce renal cancer-related mortality.

The heat shock protein 70 (HSC70) family represents a group of molecular chaperones that can support protein synthesis and prevent the formation of aggregates [5]. HSC70 plays an important role in several processes, such as nascent polypeptide folding, chaperone-mediated autophagy, and protein translocation across membranes. Accumulation of incorrect proteins in cancer cells and deregulated signaling pathways could influence the survival outcomes, and the maintenance of protein homeostasis by HSC70 may be key for the growth and survival of cancer cells [6].

In this study, we investigated the role of HSC70 with respect to the survival outcomes of patients with renal cell carcinoma.

We enrolled 121 patients with clear cell renal cell carcinoma. Surgical cancer tissues were collected at the China Medical University between January 2013 and December 2015. All 121 tissue specimens were confirmed pathologically and graded by two independent pathologists, according to the Fuhrman nuclear grade. The inclusion criteria included a histological demonstration of clear cell renal cell carcinoma, 18-80 years of age, absence of distant metastasis at surgery, and follow-up for up to 5 years after surgery. Surgical specimens of the primary renal cell tumors were immunohistochemically stained using the anti-HSC70 antibody. The exclusion criteria included preoperative adjuvant treatment and death unrelated to renal carcinoma. The protocol was approved by the China Medical University Ethics Committee. The clinicopathological characteristics included in the study were age, histological grade, serum Ca2+ levels, hemoglobin levels, neutral granulocyte count, and platelet count.

Resected renal cancer specimens were fixed in 4% formaldehyde and embedded in paraffin. Cancer tissue samples, which were sliced into 5-μm‒thick sections and placed on glass slides treated with 3-aminopropyltriethoxysilane, were deparaffinized and rehydrated. After that, they were incubated overnight at 4 °C with a primary antibody against HSC70 (1:50) purchased from Abcam (ab51052). After washing, cells probed with the primary HSC70 antibody were detected by incubating with horseradish peroxidase (HRP)-conjugated secondary antibody at 37 °C for 45 min (purchased from Gene Tech, Shanghai), and then with DAB (DAB kit; purchased from Gene Tech, Shanghai). The primary antibody was substituted with phosphate-buffered saline in the negative control. Immunohistochemical signals were evaluated independently by two pathologists.

Overall survival (OS) was defined as the time from the date of the surgery to the date of death. Relationships between OS and positive or negative HSC70 expression were evaluated using the independent sample t-test. The OS of these renal carcinoma patients was estimated using Kaplan-Meier survival curves, and the difference was analyzed using the log-rank test. All data were analyzed using the SPSS software (version 21.0; SPSS, IL, USA). P-values less than 0.05 were considered statistically significant.

Analysis using the Oncomine database (www.oncomine.org) allowed the determination of HSC70 mRNA levels and DNA copy numbers in different types of cancer. The t-test was used to determine p-values when comparing cancer tissues with normal control datasets. Multiple change was defined as 2, and the P-value was set at 0.01. Significant correlations can be found in a series of studies, which are shown in typical diagrams.

Analysis using the CCLE database allowed the determination of HSC70 mRNA levels in a series of cancers. The number of chromosome copies and information from many edited online encyclopedias were generated from parallel sequencing data from 947 human cancer cell lines to facilitate the identification of genetic, pedigree, and predictive factors of drug sensitivity. 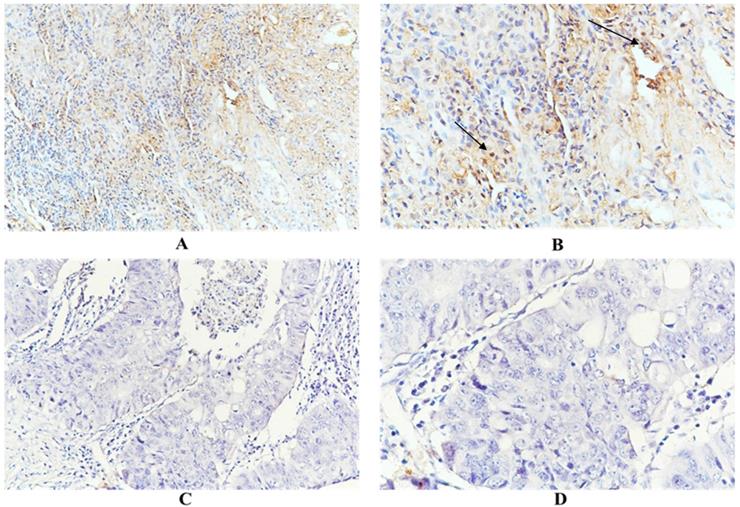 Immunohistochemical examination showed that HSC70 was expressed in the nucleus and/or cytoplasm of renal cancer cells, and HSC70 was not detected when the primary antibody was omitted. As shown in Figure 1, positive and negative anti-HSC70 staining were observed in tumor samples from renal cancer patients. HSC70 expression was observed in 50 patients, with a positive rate of 41.3%. A total of 22 (18.2%) patients showed distant metastases. Among them, 14 patients were HSC70-positive, with a positivity rate of 63.6%. There were 20 (16.5%) deaths, 13 of the deceased individuals had exhibited HSC70-positive signals (positivity rate, 65%). Overall, renal cancer patients with distant metastases or deceased patients expressed higher levels of HSC70 than patients without distant metastases or those who survived (Figure 1). 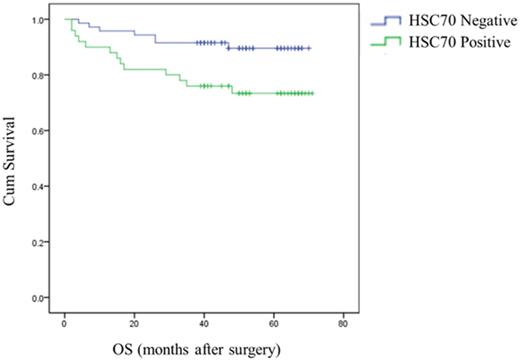 Unexpectedly, the results of CCLE analysis differed from those of the Oncomine analysis. HSC70 was not upregulated in a renal cancer cell line and ranked only 31 in many cell lines (Supplementary Figure 2).

Because significant differences were found in HSC70 expression in renal cancer patients, we next explored the potential role of HSC70 in renal cancer and its association with other characteristic biomarkers based on the molecular subtypes. In Oncomine co-expression analysis, HSC70 expression was found to be significantly correlated with MATR3 (r = 0.851; Figure 3). This result predicted that HSC70 might function in combination with MATR3 to regulate the biological behavior of renal carcinoma cells and tissues.

Renal cancer is a clinically heterogeneous disease, and many factors influence its prognosis [10]. In the absence of effective therapy, renal cancer can metastasize to other tissues or organs, or recur after therapy, resulting in death. The high probability of tumor recurrence and metastasis results in poor outcomes for patients with renal cancer [11,12]. Multiple proteins are involved in the process of cancer metastasis [13-16]. At present, the mechanisms underlying renal cancer metastasis remain unclear. Distant metastatic renal carcinoma is usually difficult to treat, and patients with this condition usually have a short OS, highlighting the importance of finding new and effective indicators of prognosis for renal cancer patients.

Correlation analysis of HSC70 in different molecular subtypes of renal cancer. In the Oncomine analysis, the expression of HSC70 is significantly correlated with MATR3 expression (shown in red box). 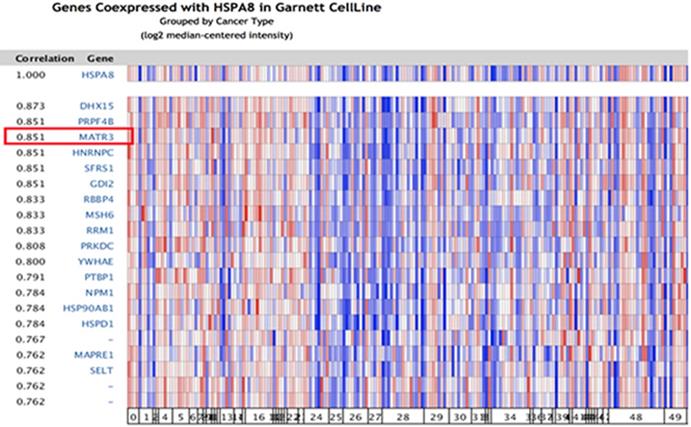 HSC70 maintains protein homeostasis in both normal and stress conditions. HSC70 can also regulate the translocation of proteins into cellular organelles [17,18]. To our knowledge, no clinical studies have explored the association between HSC70 expression and the survival outcomes of renal cancer patients.

There are some limitations to our study. HSC70 may be involved in tumorigenic events, such as metastasis, invasion, and drug resistance. However, a detailed mechanism underlying the function of this protein with respect to the regulation of renal cancer progression is lacking. Further studies should be performed to explore the molecular mechanisms by which HSC70 regulates the biological behavior of renal cancer cells and tissues and to find new ways of treating patients with renal carcinoma.

The study was approved by the Ethical Committee of China Medical University.

The authors declare that the study was conducted in the absence of any financial relationships that could be construed as a potential conflict of interest.