Purpose: To investigate the expression of miR-125b and vitamin D receptor (VDR) in renal cell carcinoma (RCC) and assess the biological function of miR-125b in RCC.

Methods: We used quantitative real-time polymerase chain reaction (RT-PCR) to detect the expression of nucleic acids and western blotting to analyze the protein abundance in RCC cell lines. MiR-125b mimic and inhibitor were employed to investigate the function and behavior of miR-125b in RCC cell lines. The relationship between miR-125 and VDR was verified using luciferase assays.

Conclusion: MiR-125b displays an oncogene profile in RCC, patients with high expression of miR-125b should be a more frequent follow-up. MiR-125B may be a potential therapeutic target for RCC.

Renal cell carcinoma (RCC) accounts for approximately 3% of all human cancers and exerts the most lethal urological malignancies [1]. Since the enormous progress in screening and treatment in the last decade, the prognosis is still poor. It is estimated that there were 73,820 new diagnoses and 14,770 deaths related to RCC in 2019 in the United States [2]. Therefore, it is crucial to identify novel biomarkers and effective therapeutic targets in RCC.

Vitamin D receptor (VDR) is a nuclear class II receptor family that includes androgen receptor and estrogen receptor [3]. 1,25-dihydroxy vitamin D3 is the specific ligand of VDR. Several studies revealed that vitamin D3 supplements would be a potential strategy to reduce the risk of RCC [4-6]. On the other hand, VDR expression attenuates in RCC tissue, and loss-of-VDR predicted a poor prognosis in RCC [7-10]. Of note, in our previous studies, we proved that VDR overexpression could inhibit RCC cell proliferation, migration, and invasion and promote apoptosis. Moreover, our findings demonstrated that VDR expression was associated with clinical-pathological characteristics in RCC [10-11]. Altogether, we convinced VDR participated in oncogenesis in RCC.

MicroRNAs (miRNAs) are a class of small non-coding single-stranded RNAs with a length of 19-22 nucleotides and contribute greatly to human cancer by targeting mRNAs for cleavage or translational repression [12]. In the present study, we searched TargetScan (http://www.targetscan.org/) and inferred VDR would be a target of miR-125b. Many studies have shown that mi-125b figures prominently regulate biological processes of human cancer via degradation or translational inhibition of specific target mRNAs [13-17]. Many scholars reported the relevance of miR-125b expression and VDR in breast cancer [3,18,19]. Although studies revealed miR-125b would be a potential oncogene via targeting VDR, it is still rare evident to display the direct binding of miR-125b and VDR.

Currently, the mechanism of miR-125b effects on the occurrence and development of RCC was still unclear. Herein, in this study, we aimed to investigate the function of miR-125b and VDR in RCC. Our results revealed that miR-125b was a potential oncogene via targeting VDR. MiR-125b deficiency inhibited RCC cell proliferation, migration, and invasion in vitro.

Total RNA was extracted from the tissues and cells using TRIzol reagent (Invitrogen, Carlsbad, CA, USA) according to the manufacturer's protocol. For miR-125b detection, Taqman assays were employed, and U6 was used as an internal control. For mRNA analysis, total RNAs were reverse transcribed into cDNA using the RT MasterMix Kit (Abm). Then, qRT-PCR was performed using SYBR Green-I as the fluorogenic dye. The relative expression fold changes were calculated by the 2-∆∆CT method.

Cell proliferation was measured using the CCK-8 (Dojindo, Kumamoto, Japan) assay. Cells (786-O and ACHN) transfected with miR-125b mimic. The inhibitor was seeded into 96-well culture plates at a density of 1×104 cells/well. The proliferation assay was carried out for 4 days, and cell growth was measured every 24 hours. Briefly, 10 μl of CCK-8 solution was added to each well, and the plate was incubated at 37 °C for 24 hours. Then, the absorbance of each sample was measured at 450 nm using a microplate reader. All experiments were performed in triplicate.

Cell apoptosis analysis was performed by flow cytometry using a fluorescein isothiocyanate (FITC) and propidium iodide (PI) kit (Vazyme, Nanjing, China). Cells were harvested after treatment with miR-125b mimic or inhibitor and washed with precooled PBS. The cells were mixed with 500 μL of binding buffer and 5 μL of FITC and PI and incubated for 10 minutes at room temperature (20 to 25 °C). Apoptosis rates were then measured by flow cytometry (FACS, Partec AG, Arlesheim, Switzerland). The percentage of apoptotic cells was calculated. Each experiment contained three replicates for each condition.

Cell migration was measured using a Transwell chamber plate (Corning, Bedford, MA, USA). Briefly, 1×105 cells were seeded onto the Transwell insert 48 hours after transient transfection. 20% of fetal bovine serum was used as a chemoattractant. After 48 hours of incubation at 37 °C, cells that did not migrate through the pores of the Transwell insert were manually removed with a cotton swab. The cells present at the bottom of the membrane were fixed in 4% polymethanol for 15 minutes and then visualized by incubation with 0.1% crystal violet for 20 minutes. Independent experiments were repeated three times. The invasion assay was performed similarly to the migration assay, with the only difference being that the upper layer of the Transwell chamber membrane uniformly covered the Matrigel. Two independent experiments were performed in triplicate for each experiment.

TargetScan was used to predict miRNAs that could potentially target VDR and identify possible binding regions. The VDR 3'-untranslated region (UTR) contained miR-125b binding sites. The dual-luciferase reporter system (Beyotime, Shanghai, China) was then used to verify luciferase activity. The VDR 3'-UTR cDNA sequence, including the mutant or wild-type miR-125b binding region, was amplified and cloned into the pGL3 luciferase vector (Promega, Madison, WI, USA). Next, 789-O cells were transfected with luciferase reporter plasmids and ether miR-125b inhibitor or NC using Lipofectamine 2000, according to the manuscript protocol. Then, the activity of luciferase was determined using a luminometer (Promega, Madison, WI, USA) and measured based on that of the empty pGL3 vector.

All statistical analyses were performed using GraphPad Prism 7 and SPSS 22, and all the data are presented as the mean ± SD. P<0.05 was considered to indicate a significant difference.

We verified the expression of miRNA in RCC. 4 RCC cell lines, including ACHN, A498, Caki-1, 786-O, and embryonic kidney cell line 293T, were detected via Quantitative RT-PCR. miR-125b was increased in all the RCC cells compared to 293T. miRNA-125b expression in ACHN was deficient in RCC cell lines. We took it for mimics administration; meanwhile, 786-O displayed the highest expression of miR-125b and further selected for inhibitor administration (Figure 1A). As shown in Figure 1B and C, we successfully overexpressed miR-125b in ACHN cells and knockdown miR-125b in 786-O cells.

However, we used cisplatin as a positive control of cell apoptosis. As shown in Figure 2C, miR-125b could prevent the cell from apoptosis under the pressure of cisplatin. Besides, as exhibited in Figure 2D, miR-125b inhibitors infection significantly increased the ratios of apoptosis in 789-O cells. Bax, a pro-apoptosis protein, was promoted after down-regulation of miR-125b; correspondingly, BCL-2, an anti-apoptosis protein, was enhanced in miR-125b overexpressed cells (Figure 2E). 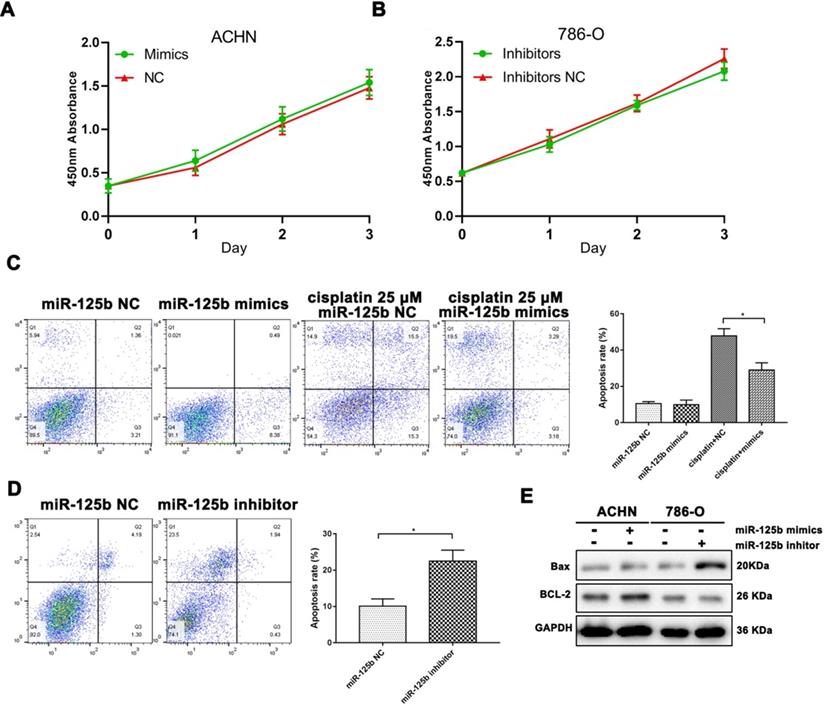 MiR-125b targets and impairs the expression of VDR

As previously described, we predicted VDR might be a potential target gene of miR-125b via TargetScan analysis (Figure 4A). We constructed a dual-luciferase reporter system to verify the direct binding of miR-125b and VDR. As displayed in Figure 4B, the miR-125b inhibitor significantly decreased luciferase activity in the cell with VDR 3'UTR miR-125b binding site wild-type plasmids. Besides, it was failed to impaired luciferase activity in the cell with mutation plasmids (Figure 4B). As display in Figure 4C, Western blotting indicated miR-125b negatively regulated the expression of VDR. These results indicate that VDR may be a direct target gene of miR-125b. 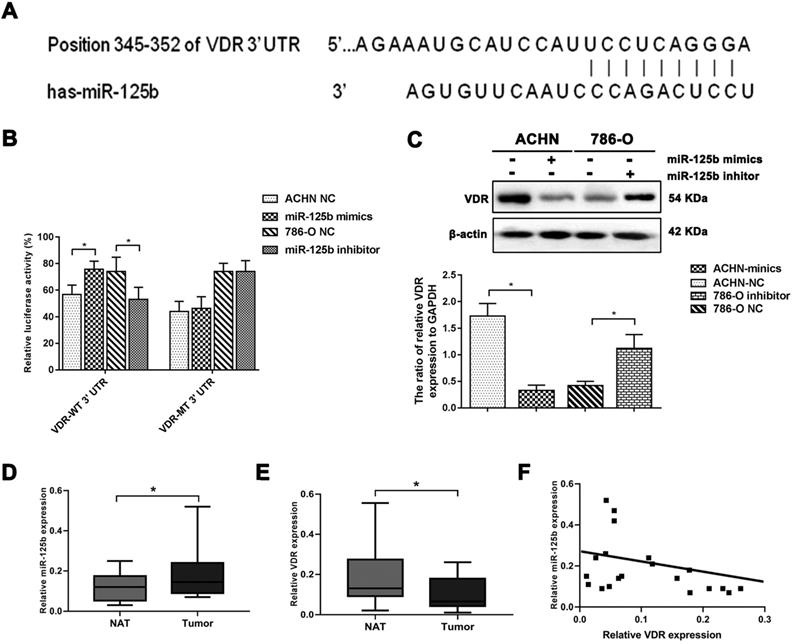 The expression of miR-125b has been reported to be altered in certain types of cancer. In normal tissue, miR-125b maintains in a low expression level [20], and increased during malignant hematopoiesis, suggesting its involvement in carcinogenesis [21]. Still, Huang L et al. reported miR-125b was deficient in bladder cancer and impaired migration and invasion in vitro [22,23]. Overexpressed miR-125b promotes migration, invasion, and metastasis in gastric cancer [24]. High levels of miR-125 expression were associated with unfavorable clinical outcomes in non-small-cell lung cancer [25].

Similarly, miR-125b is sharply increased in chronic myeloid leukemia, and inhibition of miR-125b impairs proliferation with the G0/G1 phase arresting [26]. These findings suggest that the role of miR-125b is essential in the tumorigenesis of certain tumors. Notwithstanding, the expression of miR-125b in different tumors varies largely.

Our finding presents similar results to the previous studies. Numerous studies have already proven the role of miR-125b in proliferation, apoptosis, and cellular differentiation in carcinogenesis [24-26]. However, the mechanism by which miR-125b upregulation regulates migration and invasion in RCC remains elusive.

By bioinformatic analysis, we found the seed sequence of miR-125b was perfectly matched with the VDR mRNA 3'-UTR, and luciferase activity assay verified miR-125b could directly target the VDR 3'-UTR. Interestingly, 3'-UTR of VDR mRNA contains a miR-125b recognition element (MRE125b) containing 8 nucleotide elements, and that miR-125b could functionally recognize MRE125b. Furthermore, miR-125b mimics degrade the endogenous VDR protein level in breast cancer [3,18]. In melanoma cell lines, the endogenous VDR mRNA level is inversely associated with the expression of miRNA-125b [27]. In addition to these findings, our work reported that miR-125b should be a crucial regulator of VDR in RCC cells and promote the development and metastasis of RCC.

VDR, as a transcription factor, is one of the most studied tumor suppressor genes. Many studies reveal VDR participates in numerous physiologic processes including serum calcium regulation, cell proliferation and differentiation, and immunomodulatory functions [3]. Our previous work demonstrated that VDR overexpression significantly suppresses RCC cell proliferation, migration, and invasion [11]. Additionally, VDR could inactivate mutations, deletions, and promoter methylation to regulate cell proliferation and differentiation [4,28]. In this article, we are failed to prove that miR-125b could regulate cell proliferation by targeting VDR. Multiple epigenetic interactions with VDR counteract cell proliferation, migration, and specific mechanisms require further study. Altogether, we concluded that miR-125b displays an oncogene profile in RCC, patients with high expression of miR-125b should be a more frequent follow-up. MiR-125b may be a potential therapeutic target for RCC.