Background and objectives: Although diabetic-induced hepatotoxicity is less common, it can be included in the list of target organ pathologies associated with diabetes. This study aimed to investigate the potential therapeutic role of sacubitril/valsartan (LCZ696) in modulating oxidative and inflammatory injuries and liver fibrosis in STZ-induced hyperglycemic rats in comparison to valsartan alone.

The incidence of diabetic complications is linked to both inflammation and oxidative stress [8, 9]. Hyperglycemia and/or the oxidation of fatty acids leads to the excessive release of reactive oxygen species (ROS) and subsequent oxidative stress in diabetes mellitus [10]. ROS overproduction can modify cellular functions and induce lipid peroxidation, inflammation, and cellular death in different tissues [11]. Furthermore, it can also activate transcription factors involved in cell signaling such as NF-κB and the release of proinflammatory cytokines [12], thereby impairing insulin signaling, lipolysis, and hepatic glucose production [13]. Therefore, attenuation of hyperglycemia and its associated oxidative stress and inflammation is considered an effective strategy for alleviating diabetes-induced liver damage.

Angiotensin AT1 receptor blockers have been extensively used to treat hypertension and reduce complications associated with diabetes [14]. Furthermore, these blockers demonstrate beneficial effects in the treatment of chronic liver disease. Accordingly, in carbon tetrachloride-induced hepatic fibrosis, valsartan has a protective effect against liver damage [15] and reduce fibrosis in patients with hepatitis C [16].

LCZ696 belongs to a new class of drugs combining the angiotensin II receptor antagonist valsartan and the neprilysin inhibitor sacubitril. This compound has been found to attenuate cardiac hypertrophy, fibrosis, and vasculopathy in a rat model of chronic kidney disease [17, 18], and inhibits inflammation, oxidative stress and glomerulosclerosis in diabetic nephropathy rat model [19]. Additionally, a clinical trial showed that LCZ696 in patients with mild to moderate hepatic impairment was safe and well tolerated [20]. Regarding LCZ696 and liver protection, emerging data have confirmed that LCZ696 improves portal hypertension in portal hypertensive rats through downregulation of hepatic endothelin-1 [21]. Moreover, LCZ696 has been shown to improve measurements of liver function in patients with heart failure (HF) with reduced ejection fraction (HFrEF) [22]. Based on the above studies, we hypothesized that administration of LCZ696 in an animal model of STZ-induced hyperglycemic rats may have a greater hepatoprotective effect compared with valsartan monotherapy. However, data elucidating LCZ696 impact on diabetes-induced hepatic injury are lacking and the effects of LCZ696 on liver function have not been assessed. We utilized this rat model that displays hyperglycemia-induced oxidative stress, inflammation and hepatic fibrosis to evaluate the impact of combined angiotensin receptor blocker (valsartan) and neprilysin inhibitor (sacubitril) on STZ-induced oxidative stress, inflammation, and hepatic fibrosis in comparison to valsartan alone.

Adult male Wistar rats (250-300 g) were collected from the Central Animal Facility, Pharmacy College, King Saud University, where they were maintained and monitored in a pathogen-free environment. In compliance with the National Institute of Health Guide for the Care and Use of Laboratory Animals, Institute for Laboratory Animal Research (NIH Publications No. 80-23; 1996), all experimental procedures, including euthanasia, were performed under the ethics approval number (SE-19-118). Prior to experimentation, all animals were acclimatized in polycarbonate cages in a well-ventilated room for 1 week. The animals were maintained at standard laboratory conditions (temperature of 23 °C, relative humidity of 55±5 and 12-h light/dark cycle), and provided food and water ad libitum.

DM was induced in overnight fasted rats following a single intraperitoneal injection (60 mg/kg) of streptozotocin (STZ) dissolved in freshly prepared 0.1 M citrate buffer with pH 4.5, as previously described [23]. Next, to prevent hypoglycemic shock, the rats were provided free access to a dextrose solution (5%) for 24 h. Blood sugar levels were tested (mg/dl) 2 days after the STZ injection using a glucometer (ACCU-CHEK ACTIVE, Roche, Germany). Animals with blood glucose levels reaching >250 mg/dl were considered diabetic and were included in the study.

Eighteen diabetic male rats were randomly divided into three groups (n =6) and six normal rats were used as controls: 1) Control rats received the vehicle, 2) STZ-induced hyperglycemic rats received the vehicle, 3) STZ-induced hyperglycemic rats treated with valsartan (31 mg/kg/day) orally, and 4) STZ-induced hyperglycemic rats treated with LCZ696 (68 mg/kg/day) orally. Valsartan (Tabuvan®) and LCZ696 (EntrestoTM) tablets were suspended in 0.5% carboxymethyl cellulose (CMC) and administered by oral gavage in a volume of 0.5 ml/100 g body weight of each animal. For both medications, dose selection was based on previous literature [24]. During the experimental phase, the control and STZ groups were administered similar volumes of 0.5% CMC as the vehicle. Treatment started 2 weeks after the diagnosis of diabetes and continued for six consecutive weeks. After the treatment period, overnight fasted animals were anesthetized with ketamine (Hikma Pharmaceuticals, Jordan, 94 mg/kg)/xylazine (Laboratories Calier, Spain, 10 mg/kg) mixture. Blood samples were collected utilizing cardiac puncture and placed into clean tubes. Serum samples were obtained by centrifugation at 3,000 rpm (800 g) for 10 min and stored at -80 °C until analysis. After blood collection, the animals were immediately decapitated, whole liver was dissected and weighed, a small portion was immersed in 10% neutral formalin buffer (pH 7.4) for subsequent use in histopathological studies. The remaining liver samples were immersed in liquid nitrogen for a minute and then stored at -80 °C until analysis.

The harvested livers were cut into separate portions, rinsed in cold physiological buffer pH 7.4 (1:10, w/v), and homogenized using a homogenizer (ULTRA-TURRAX® T 25, IKA; Werke, Germany). In order to remove cell debris, this homogenate was centrifuged at 1000 rpm for 10 min at 4 °C. After discarding the pellets and to obtain the post-mitochondrial supernatant, a portion of supernatant was further centrifuged at 12000 rpm for 20 min and total protein concentrations in livers were measured according to the Lowry assay [25] using bovine serum albumin as the standard.

Masson's trichrome (M-T) stained sections were used for the detection of collagen deposition. In 50 randomly selected fields, the area of fibrosis was determined at a 200× magnification using the following formula (% positive area = stained area / total area × 100) as described earlier [26].

Effects of LCZ696 and valsartan on serum biochemical measurements 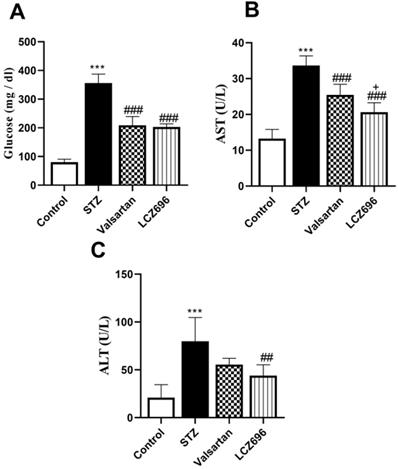 Serum lipids were determined to evaluate the anti-hyperlipidemic effect of LCZ696 and valsartan in STZ-induced hyperglycemic rats. The STZ-treated rats exhibited hypercholesterolemia (Figure 2A), hypertriglyceridemia (Figure 2B), and a marked increase (p<0.05) in the serum LDL-C levels (Figure 2D) relative to the control group; and a significant decrease in HDL-C (p<0.01) in the STZ group (Figure 2C), treatment with LCZ696 (68 mg/kg) and valsartan (31 mg/kg) increased HDL-C significantly (p<0.01) when compared with STZ-treated group. Additionally, in the STZ-induced hyperglycemic rats, therapy of LCZ696 (68 mg/kg) and valsartan (31 mg/kg) reduced serum cholesterol (p<0.001 and p<0.05, respectively), triglycerides (p<0.001), and LDL-C (p<0.05) compared to the STZ group. However, LDL-C reduction in valsartan-treated animals did not reach a statistically significant difference. There was a trend towards less cholesterol, triglycerides and LDL-C levels in the group treated with LCZ696 compared to the valsartan group. 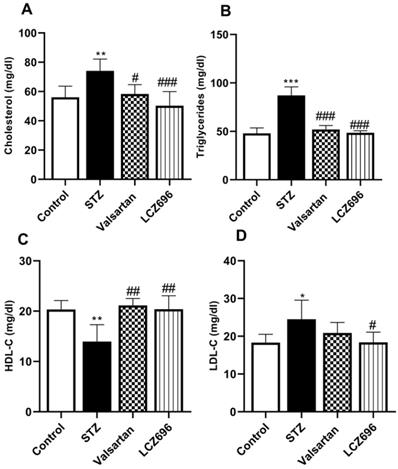 Impact of LCZ696 and valsartan on the circulating levels of IL-6, IL-1β, and TNF-α in STZ-induced hyperglycemic rats

Using ELISA, we assessed the serum profile of cytokines in experimental animals. On examining the serum levels of the proinflammatory cytokines, IL-6 (Figure 3A), IL-1β (Figure 3B), and TNF-α (Figure 3C) were significantly elevated in the STZ group compared to the control group. Treatment of STZ-induced hyperglycemic rats with LCZ696 significantly reduced the elevated levels of cytokines IL-6 (P<0.001), IL-1β (P<0.05) and TNF-α (P<0.01) compared to the STZ-treated group, unlike valsartan therapy which only attenuated levels of IL-6 (P<0.01). There was a trend towards lower proinflammatory cytokines in the LCZ696 group as compared with valsartan therapy.

Liver sections were stained with Masson's trichrome (M-T) to detect collagen deposition and assess the impact of LCZ696 and valsartan on hepatic fibrogenesis induced by STZ (Figure 7A). Compared with the control group, liver sections from the STZ-treated group demonstrated prominent blue staining in the fibrotic septa between lobules in particular in hepatic triad, suggesting a high level of collagen deposition. However, compared with the STZ group, LCZ696 and valsartan treatments significantly reduced the intensity of the livers areas positively stained using Masson's trichrome (p<0.001; Figure 7B). But the effect of treatment with LCZ696 was more effective when compared with the valsartan group. 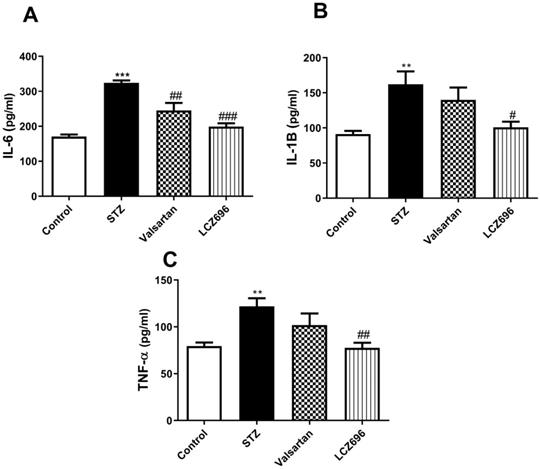 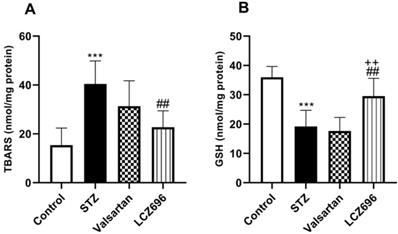 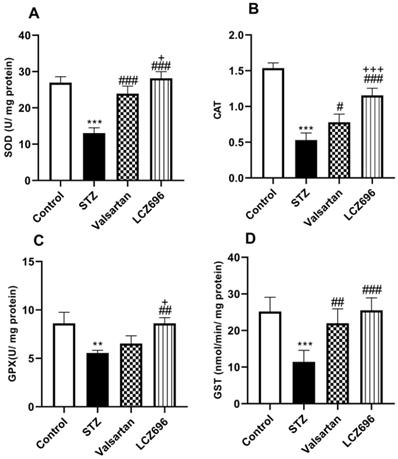 Several reports have suggested the potential therapeutic role of angiotensin receptor-neprilysin inhibitors in the attenuation of diabetic complications [28, 29]. In this study, STZ-induced hyperglycemic rats exhibited hyperglycemia and hepatic hyperlipidemia. This is consistent with previous studies [30, 31]. In this study, our results indicated that valsartan possessed anti-hyperglycemic activity, this is supported by previous studies for example, Chan et al. [32] has reported that valsartan have anti-hyperglycemic effect via antagonism of the AT1 receptor resulting in increased use of glucose in peripheral tissue and reduced hepatic gluconeogenesis. In contrast, other studies have shown that valsartan and/or LCZ696 in STZ-induced hyperglycemic animals did not affect blood glucose levels [33, 34]. These conflicting findings may be due to differences in the diabetic animal model, dosage and dosing frequency.

Interestingly, treatment of STZ-induced hyperglycemic rats with LCZ696 ameliorated hyperglycemia, liver dysfunction, and hyperlipidemia, indicating that, in the STZ-induced hyperglycemic rats, the combination of sacubitril and valsartan can provide a more favorable metabolic and hepatoprotective response compared to valsartan alone. Similarly, recent clinical data have explored the efficacy of LCZ696 in patients with diabetes, suggesting that this therapy demonstrated a superior glycemic profile [35]. Additionally, simultaneous neprilysin inhibition and AT1‐receptor blockade reportedly control glucose and lipid metabolism in obese patients, including natriuretic peptides, bradykinin, endothelin‐1, and glucagon‐like peptide 1 [36], thus elucidating the effect of LCZ696 on lipolysis and mitigating hyperlipidemia in STZ-treated rats.

Experimental and clinical studies have demonstrated that diabetes associated with hyperglycemia and that hyperlipidemia is linked to increased ROS, oxidative stress, and inflammation [37, 38]. In this context, persistent hyperglycemia generates ROS, that contributes to oxidative damage of the macromolecules (lipids, carbohydrates, proteins, and nucleic acids) ultimately leading to tissue damage. Most strategies used to prevent hepatic damage from multiple insults are based on reduction of ROS and inflammation [39-41]. In this study, STZ-induced hyperglycemic rats presented markers of elevated tissue oxidative injuries associated with increased malondialdehyde. In addition to these markers, a marked increase in the levels of the proinflammatory cytokines, as well as a deficiency in antioxidant enzymes, was observed. Consistently, other reports have revealed that hyperglycemia-induced elevated ROS levels reduced antioxidant enzyme levels [10] and increased proinflammatory cytokines [13]. Moreover, increased plasma levels of TNF-α and IL-6 have been previously reported in STZ-treated rats [42]. Previous studies have shown that IL-6 can inhibit glycogen synthesis [43], and TNF-α can decrease glucose uptake in hepatocytes and increase lipolysis [44], both of which can block hepatic insulin signaling. 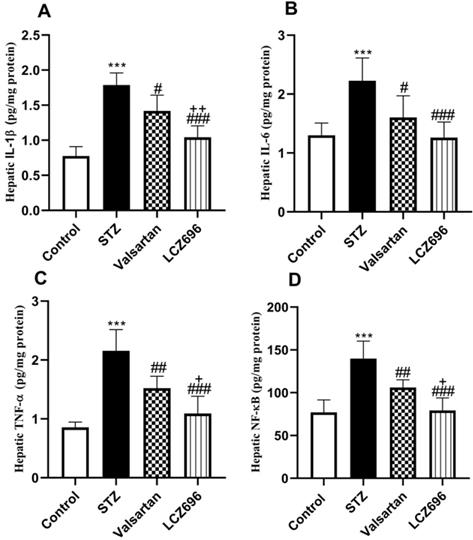 The major findings of this study were that treatment with LCZ696 could halt the progression of hepatic fibrosis, oxidative damage, lipid peroxidation, and inflammation. LCZ696 treatments also reduced serum transaminases, cholesterol, and triglycerides. In addition, LCZ696 therapy boosted GSH and other antioxidants, inhibited hepatic NF-κB, and prevented hepatic injury in STZ-induced hyperglycemic rats. The blockage of the AT1 receptor by valsartan reportedly prevents the development of hepatic fibrosis via inhibition of TGF-β1 expression in type 2 diabetic rats [45]. Reportedly, LCZ696 increases atrial natriuretic peptide (ANP) which inhibits the activation of the NF-KB pathway, reducing the development of ROS and cytokines [45, 46]. This study elucidates that Attenuation of oxidative stress and inflammation with LCZ696 was instrumental in the superior suppression of hepatic fibrosis compared to valsartan alone. This improvement in hepatic architecture and functions following LCZ696 therapy may be attributed to the inhibition of neprilysin augmentation of natriuretic peptides (NPs). Furthermore, it has been reported that natriuretic peptide pathways participate in the suppression of cardiac fibrosis [47]. Other studies have shown that collagen aggregation and cell proliferation are reduced in neprilysin deficient mice [48]. 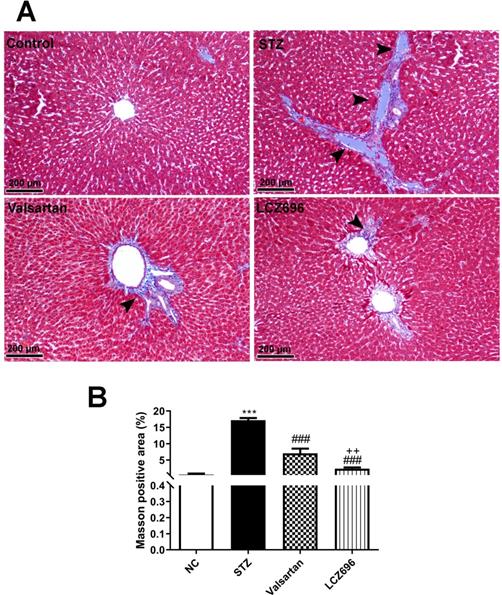