Endovascular treatment for dural arteriovenous fistulas in the petroclival region

Petroclival region DAVFs have a variety of potential anatomical configurations and are defined by the involved venous sinus and plexus overlying the bony structures [6]. Petroclival region DAVFs are difficult to treat. Surgical removal often carries the risk of compromising the important neighboring neurovascular structures [7]. Although stereotactic radiosurgery is effective for intracranial DAVFs, it is not suitable for petroclival DAVFs. The DAVFs of petrosal region often present with hemorrhage and are at higher risk for rebleeding. Besides, the latent effective period is too long [8]. 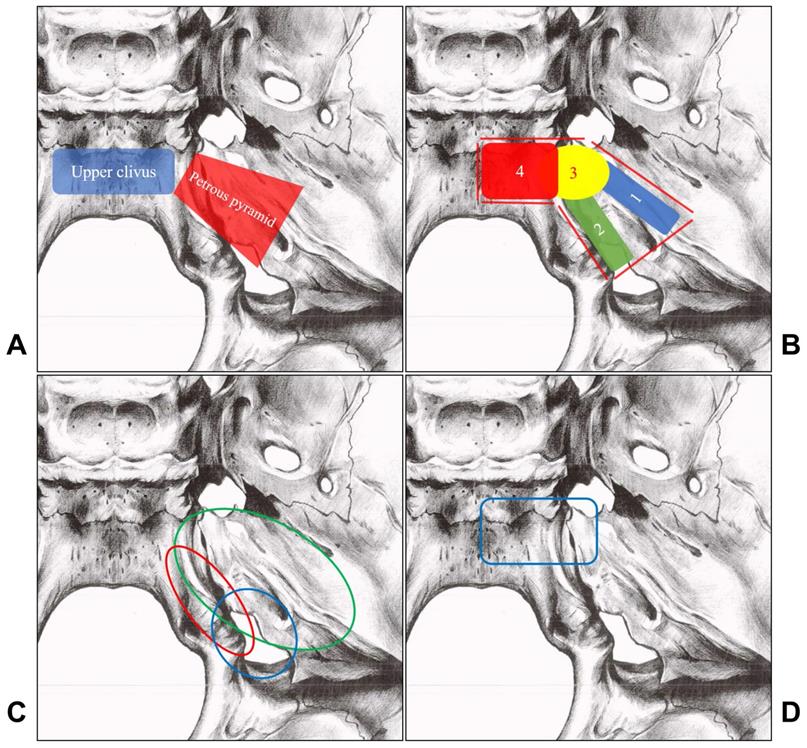 The Upper clival DAVF and upper clival epidural-osseous DAVF are rare. The two distinct entities are distinguished from each other mainly based on their fistula locations: the former is on the dura, the latter is on the wall of the dilated venous pouch of the intraosseous veins [22-24].

The normal dural supplying arteries in the petroclival region can be divided in two groups: the lateral petroclival and the petrous apex/upper clivus groups [4, 25].

Under rare circumstances, the anterior meningeal artery of the VA, the subarcuate artery of the anterior inferior cerebellar artery, and the tentorial branch of the posterior cerebral artery can also provide blood supply to the DAVFs in this region [23, 25, 37-39]. For the clival epidural-osseous DAVFs, in addition to the aforementioned feeding arteries, the posterior auricular artery, internal maxillary artery, superficial temporal artery, and the muscular-dural and the ascending cervical branches of the VA can also be involved [24].

In general, the feeding arteries of petroclival region DAVFs originate from the ipsilateral side, and occasionally they might originate from both the ipsilateral and contralateral sides [18]. In the condition of DAVFs, the blood-supplying range of the meningeal branches of the ECA, ICA, and VA becomes wider than in normal conditions. And these arteries also become unusually enlarged [21, 22].

In the petroclival region, the posterior part of the cavernous sinus (CS), the SPS, the IPS, and the BP converge to form the petroclival venous confluence (PVC) [11-13]. The superior petrosal vein (SPV) empties into the SPS [40]. The BP is located between the periosteal and meningeal layers of the clivus and communicates with the CS, SPS, and IPS [41, 42]. The IPS drains venous blood from the PVC and the BP then empties into the junction of the sigmoid sinus and the superior jugular bulb [43].

Different types of petroclival region DAVFs have different venous drainage patterns. The SPS DAVF usually drains into the SPV and its tributaries, and occasionally the CS can act as the venous drainage route [16, 26, 29, 44, 45]. Petrous apex DAVF mainly drains supratentorially into the Vein of Galen, the internal cerebral vein, and the straight sinus [17, 33, 46]. The IPS DAVF has a similar venous drainage to that of the CS DAVF. It often drains retrogradely into the CS via the IPS and then out through the superior ophthalmic vein, and sometimes there is some antegrade flow into the sigmoid sinus [18, 21, 27, 28].

In addition, venous outflow obstruction is common in petroclival region DAVFs, contributing to the arterialization of the thin-walled pial veins, which increases the venous pressure, promotes the formation of venous ectasia, or leads to venous infarction [15-19, 21, 23, 26, 49, 50]. As illustrated in Fig 2, the enlarged petrosal vein and the Vein of Galen even lead to obstructive hydrocephalus. In rare circumstances, the venous drainage can even flow retrogradely into the spinal veins via the mesencephalic venous connections [14, 17, 33, 45, 51]. 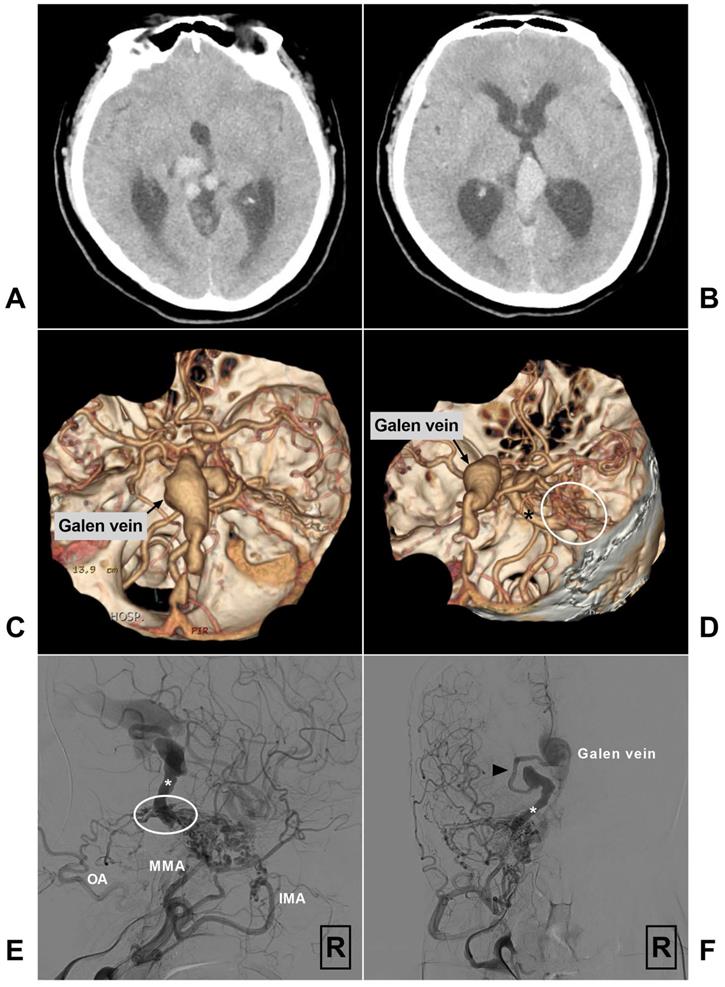 Angioarchitecture of the petroclival region DAVFs is summarized in Table 1.

SPS and petrous apex DAVFs often have retrograde pial venous drainage, deep cerebral venous drainage, and venous ectasia. Hence, they are often categorized as types III or IV according to the Cognard's classification and are prone to have aggressive clinical courses [7, 10, 15, 52]. IPS and upper clival DAVFs often drain antegradely into the venous sinuses, and they are prone to have lower Cognard's grades [18, 21, 23, 27, 28]. The clival epidural-osseous DAVF often drains into the adjacent sinuses, so its Cognard's grade belongs to types I and II in most cases [24].

Most petroclival region DAVFs should be treated due to their high Cognard's grades, especially for those with venous ectasia of alarming sizes [10]. Currently, EVT has become a first-line option for most intracranial DAVFs, which includes transarterial embolization (TAE) and transvenous embolization (TVE) [53]. The selection of TAE or TVE should be determined in a case by case approach, which is mainly based on the individual anatomic characteristics [48]. The goal of EVT is complete obliteration of the lesion [54]. To achieve definite obliteration via EVT, the embolic material has to plug the arteriovenous communication or seal the lumen of the draining venous structure [46].

Complete embolization is necessary. Though partial EVT can result in marked decrease in flow and venous hypertension, the risk of rebleeding remains unchanged [2]. Moreover, with mere occlusion of feeding arteries, the DAVFs are likely to recruit new feeders, even after a previous complete angiographic cure [52]. Currently, as a result of the development of new techniques and materials, particularly with the use of Onyx (Medtronic Neurovascular, Minneapolis, MN), TAE has become a more effective option and represents the first-line option for many DAVFs [10, 14]. However, in some cases, TAE alone may be unsuccessful in obliterating the petroclival region DAVFs, because the feeding arteries are too tiny to permit super-selective embolization [10].

Currently, TVE is useful for intracranial DAVFs involving the major dural sinuses [22, 55]. However, TVE for petroclival region DAVFs is difficult because the initial venous drainage mainly flows through the pial veins [15, 16]. Therefore, TVE could only be tried in limited cases [10]. For some intracranial DAVFs, treatment with combined TAE and TVE is superior [56]. However, for the petroclival region DAVFs, the combined TAE and TVE approach is unnecessary in most cases. Of note, TVE after unsuccessful TAE or TAE after unsuccessful TVE does not belong to the combined treatment.

In summary, EVT cannot be readily used for all petroclival region DAVFs. When the arterial feeders are large or the DAVFs are adjacent to the venous sinuses, the success rate is high.

TAE is difficult for petroclival region DAVFs and can only be performed in selected cases with large and straight arterial feeders [21]. During TAE, careful evaluation of the DAVF structure and dynamic blood flow change with 3-dimensional angiogram is necessary. Advancing the microcatheter more closely to the fistula site can increase the success rate and reduce the risk of inadvertent embolization of the non-targeted vessel [29].

The SPS, petrous apex, and upper clival DAVFs can be treated with TAE alone [7, 22, 33]. Of note, using Onyx can result in higher cure rate [17, 22]. Furthermore, the advance in improved flexibility, trackability, and shape retention of microcatheter design and the improvement of guidewire technology have permitted super-selective catheterization of more and more previously inaccessible arterial feeders [15]. For most of the intracranial DAVFs, MMA is the best route during TAE, and there is no exception for petroclival region DAVFs [57].

For SPS and petrous apex DAVFs, the petrosquamous branch of the MMA is an effective transarterial path [10, 14, 21, 33, 45]. For instance, Alleyne et al. reported an SPS DAVF with TAE [26]. The microcatheter was advanced to the most distal branch of the posterior MMA and the SPS was completely occluded with n-butyl cyanoacrylate (NBCA).

In addition to the MMA, some other arteries can also be used, such as the mastoid branch of the OA, the neuromeningeal trunk of the AphA, and the anterior meningeal artery of the VA [10, 22, 45]. For instance, the upper clival DAVF can be completely embolized via the clival branch of the AphA [22]. However, TAE via other feeders than the MMA means a lower success rate and more risks [10, 22, 45].

Onyx is widely used in TAE for its strong ability in penetrating the shunt and occluding the draining vein [22]. However, for the embolization of petroclival region DAVFs, Onyx is associated with higher risk of complications, because the Onyx would partially reflux during pushing forward [58, 59]. In contrast, NBCA tends to move forward during TAE and does not reflux [10, 45, 46]. However, NBCA may fail to penetrate deeply enough to completely occlude the DAVFs, because its polymerization is unpredictable and its adhesive properties place the patient at the risk of permanently retaining the microcatheter [14, 28, 60-62]. Therefore, the choosing of a specific embolic agent should depend on the specific angioarchitecture [22, 29, 63].

In Fig 3, we present an unsuccessful case with TAE. An illustrative case of petroclival DAVF treated with successful TAE via the MMA is also presented in Fig 4.

For petroclival region DAVFs, TVE may be a good option in some cases. SPS and IPS DAVFs may be good candidates because these DAVFs are adjacent to the SPS and IPS. For the TVE of SPS and IPS DAVFs, the detachable coils are effective in blocking the initial part of the draining vein [15, 16, 18, 28]. Even after mere occlusion of the leptomeningeal vein to reduce venous pressure, the outflow of residual DAVF could be stopped, leading to subsequent venous thrombosis inside the dura [17, 45].

For instance, according to Seong et al.'s report, an SPS DAVF was completely occluded after a coil was pushed to the fistula site via the SPV [10]. In another case reported by Gentric et al., an IPS DAVF was coiled via the IPS after percutaneous puncture of the superior ophthalmic vein [27]. IPS DAVF can be occluded tranvenously even though the IPS is thrombosed [18].

Occasionally, for the upper clival DAVF, the draining clival venous structures can be embolized with coils via the IPS [48]. However, when the DAVFs empty directly into the clival veins rather than into the adjacent sinuses, transvenous coiling without occlusion of the fistulous sites may be ineffective [22, 47]. In intraosseous DAVF, the feeding arteries are centered on the wall of the dilated venous pouch that is located within the bone and communicate with the venous structures. Therefore, this type of DAVF could be completely occluded with TVE. For curative treatment, the venous pouch can be the target during endovascular treatment [23]. Rarely, for SPS DAVF, TVE is possible through a patent occipital sinus [16]. IPCV DAVF can also be treated with TVE [20].

However, for most petroclival region DAVFs, due to the absence of connection with the venous sinus, the occlusion of the downstream sinus, or significant venous stenosis near the junction of the draining vein and the sigmoid sinus, TVE is impossible [50]. TVE through the fragile pial veins might result in premature rupture of the draining veins [15, 16].

An illustrative case of petroclival DAVF treated with successful TVE is presented in Fig 5. 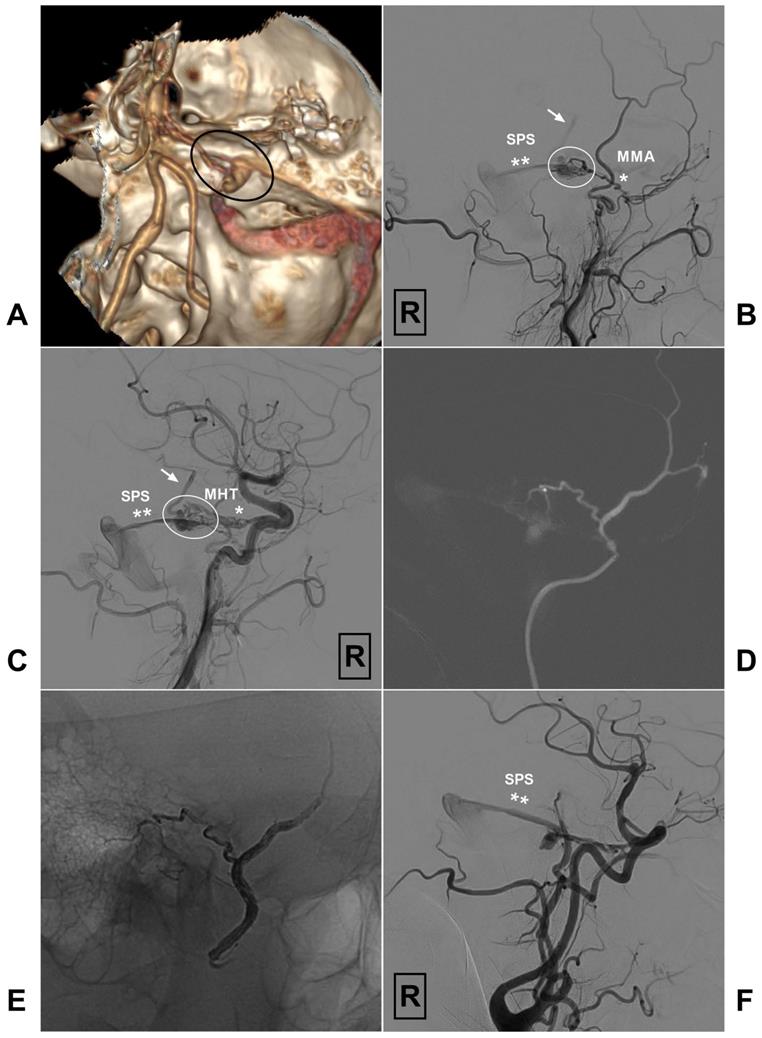 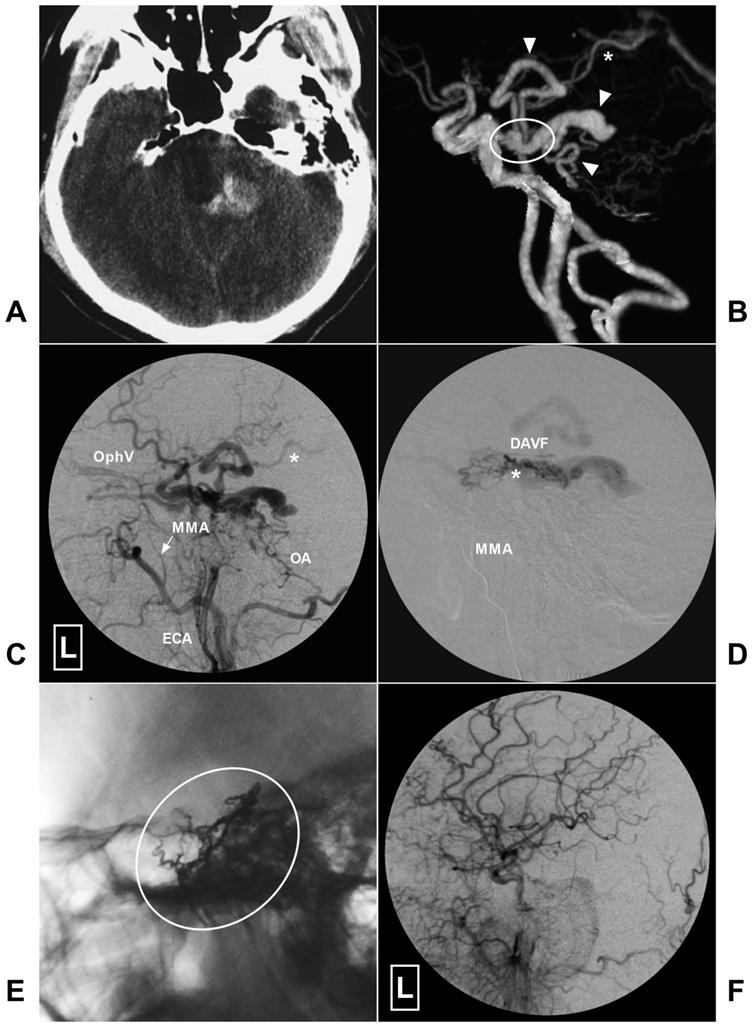 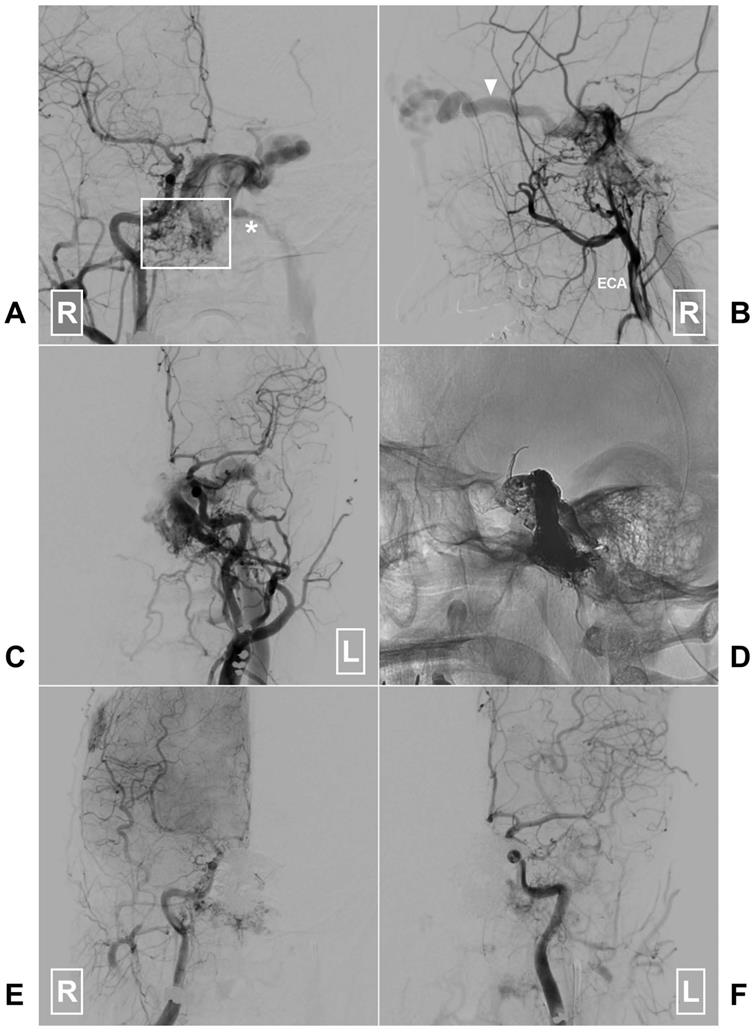 After EVT of the petroclival region DAVFs, the associated sinus might experience subsequent thrombosis. For instance, in Barnwell et al.'s study, one patient developed extensive thrombosis of the ipsilateral transverse-sigmoid sinus and the jugular bulb 1 week after the embolization [18].

At the petroclival region, there are many dangerous anastomoses. Therefore, before TAE, careful preoperative evaluation of the super-selective angiogram is necessary to identify potential collaterals to the ICA and the VA. Migration embolization of the ICA and the VA should be avoided [18].

In petroclival region DAVFs, if EVT can be performed successfully, a satisfactory outcome is anticipated [15, 33]. However, only a certain proportion of the patients could be successfully treated with EVT. For instance, in Ng et al.'s study, only 4 of the 14 patients (22%) underwent successful TAE and TVE without adjunctive surgery [15]. Compared with TAE, TVE can result in higher cure rate. In Barnwell et al.'s report, 5 of the 6 patients received successful TVE [18].

In petroclival region DAVFs, if EVT can be performed successfully, satisfactory outcomes can be anticipated. However, there are some inadvertent complications, which include cranial nerve palsy, subsequent sinus thrombosis, and migration embolization of the ICA and the VA.

Informed consent was obtained from all individual participants included in the study.