Background: Genetic variations of mu-opioid receptors are well known to contribute to growth and progression of tumors. The most common single-nucleotide polymorphism (SNP) in the mu-opioid receptor 1 gene (OPRM1) is the A118G mutation. We examined the association between the recurrent breast cancer and genotypes of OPRM1 A118G SNP (AA vs. AG vs. GG) in Korean women population.

Conclusion: OPRM1 A118G SNP had no influence on breast cancer recurrence in Korean women. Anaesthesia technique did not show significant effect on the incidence of recurrent breast cancer.

Opioid receptors are involved in tumour growth and progression; however, the mechanisms underlying the pro-tumourigenic effects of opioid receptors are not fully understood [1-3]. As the role of genetic variation in tumour occurrence and progression has become evident, the potential tumour-promoting effects of single-nucleotide polymorphisms (SNPs) in opioid receptors have been assessed in various tumour entities [4-5]. The most common SNP in the mu opioid receptor gene (OPRM1) is the adenine to guanine substitution (A118G) [6-7]. Efforts to determine the clinical relevance of OPRM1 A118G SNP in breast cancer have yielded conflicting findings [6-8] limiting its potential use as a prognostic marker in breast cancer patients.

After protocol review and approval by the Institutional Review Board of Konkuk University Medical Centre, Seoul, South Korea (KUH2020-04-039), data from adult Korean women who had undergone breast cancer surgery under general anaesthesia at Konkuk University Medical Centre from June 2012 to June 2014 were retrospectively reviewed. Before breast cancer surgery, the patients were examined to confirm that the primary origin of the lesion was the breast. Breast cancer was also confirmed by pathological examination of biopsies taken during surgery. Data regarding pathological findings, cancer stage, anaesthetic technique during surgery, and postoperative cancer treatment were reviewed. Information regarding breast cancer recurrence within 5 years (from June 2012 to June 2019) was acquired from the medical records, and cases with tumour recurrence were classified into different categories, as previously described [9]. Local recurrence was defined as tumour recurrence in the breast where the cancer was originally diagnosed, or in the skin or subcutaneous tissue of the ipsilateral chest wall. Regional recurrence was defined as recurrence in ipsilateral axillary lymph nodes or the collarbone area. Distant recurrence was defined as recurrence in another part of the body, such as the lungs, bones, brain, or contralateral breast. The pathological findings of recurrent breast tumours were also reviewed. Patients diagnosed with benign lesions, as well as those who were diagnosed with other primary cancer during the study period, and those lost to follow-up, were excluded from the study.

OPRM1 A118G SNP genotype data were obtained from our previous study; the procedure followed for OPRM1 genotyping has also been previously described [4,10].

Information regarding the anaesthetic technique used during surgery was obtained from the medical records [4,10]. Patients received either volatile anaesthesia or total intravenous anaesthesia (TIVA). None of the patients received pre-anaesthetic medications. After routine patient monitoring, anaesthesia was induced. Lidocaine, at a dose of 0.5 mg/kg, was used to reduce pain on propofol injection. In patients that received volatile anaesthesia, anaesthesia was initiated with bolus injection of propofol (2 mg·kg-1) and maintained with sevoflurane, as well as target-controlled infusion (TCI) of remifentanil. In patients who underwent TIVA, anaesthesia was induced and maintained using effect-site and plasma TCI of propofol and remifentanil, respectively. A target plasma remifentanil concentration of 10 ng·mL-1 was maintained during surgery in all patients in both groups. The end-tidal concentration of sevoflurane and target concentration of propofol at the effect site were titrated to maintain bispectral index values between 40 to 60. Rocuronium was administered for muscle relaxation and neuromuscular paralysis was antagonized with neostigmine and glycopyrrolate under monitoring with peripheral nerve stimulator.

For this study, we used data from our previous study involving 408 breast cancer patients [4]. However, 158 patients with benign disease, 8 with other primary cancer (4 with thyroid cancer, 1 with lung cancer, 1 with colon cancer, 1 with endometrial cancer, and 1 with cervical cancer), and 42 who were lost to follow-up were excluded. Therefore, data from 200 patients were analysed in the present study.

Analysis of the OPRM1 A118G SNP revealed that 40.7% of patients had the AA genotype, 49.0% the AG genotype, and 10.3% the GG genotype. No significant differences in patient demographics were observed among patients with different OPRM1 A118G SNPs (Table 1). Tumour recurrence after breast cancer surgery occurred in 14 out of 200 patients (7.0%) and the incidence of recurrence did not differ significantly among the groups (Table 1). Consistently, the characteristics of the patients with recurrent breast cancer were similar among the different groups (Table 2) (Figure 1). 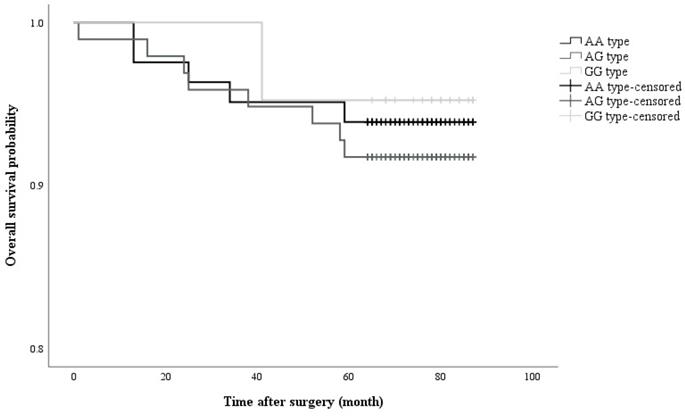 Values are expressed as mean ± SD, median [range] or number of patients (%).

Values are number of patients (%). 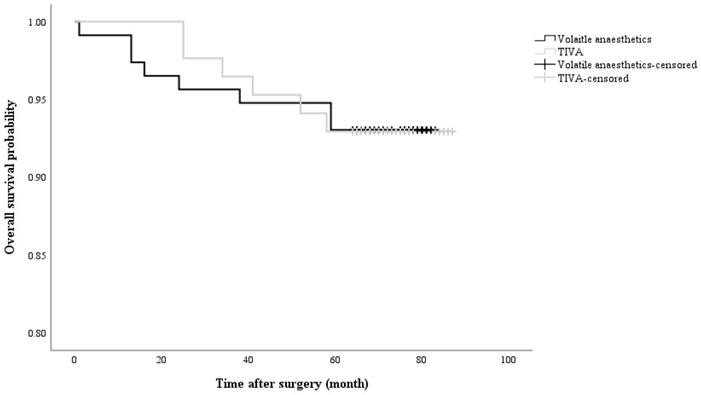 Opioid receptor activation in endothelial cells promotes angiogenesis and immune suppression [11-13]. Therefore, opioid receptors can affect tumour growth and progression. OPRM1 A118G SNPs, in particular the GG genotype, have been linked to the development of resistance to exogenous opioids, and patients harbouring the GG genotype require higher doses of exogenous opioids to manage postoperative pain [14-16]. Additionally, OPRM1 A118G SNPs have been reported to affect tumour growth and progression in breast cancer patients. Bortsov et al. [6] reported that American breast cancer patients with one or more copies of the G allele exhibited improved survival outcomes. They also showed that the frequency of G allele was lower in patients with advanced-stage breast cancer. On the contrary, a study of Polish breast cancer patients by Cieślińska et al. [8] suggested a positive association between the AG and GG genotypes and the incidence of breast cancer in north-eastern European Caucasians. They therefore concluded that the presence of the G allele was a significant risk factor for breast cancer development. However, Oh et al. [4] failed to confirm an association between the AG and GG genotypes and the incidence of breast cancer in Korean patients. They concluded that the conflicting results regarding the relationship between OPRM1 A118G SNPs and breast cancer incidence could be explained by the multifactorial nature of breast cancer initiation and progression, both of which are also influenced by environmental factors.

Our study had several limitations. Firstly, the effect of the G allele on intraoperative haemodynamic parameters and postoperative pain should be assessed to confirm the relevance of OPRM1 A118G SNPs to breast cancer recurrence. Secondly, the study was retrospective in nature, potentially leading to bias due to the presence of confounding factors. Even though the genotype data and information for anaesthetic technique were obtained from our previous study, a prospective double-blinded randomized clinical trial [10], the selection bias was not completely avoidable. Thirdly, the number of recurrent cancer patients for each genotype group was too small. For obtaining more reliable results, the large population study should be conducted in the future.

In conclusion, neither the presence of OPRM1 A118G SNPs nor the anaesthetic technique used during breast cancer surgery had an effect on breast cancer recurrence in Korean adult patients.

This study was supported by Basic Science Research Program through National Research Foundation of Korea (NRF) funded by the Ministry of Education (NRF-2018R1D1A1B07047066).