Methods: Clinical data from a total of 576 gastric cancer patients who underwent radical gastrectomy were collected. Univariate and multivariate analyses were performed to demonstrate the association between dynamic BMI variables (BMI before surgery, 1 month, 6 months or 12 months after surgery) and prognosis (DFS and OS). The correlation between BMI loss after surgery and survival outcomes was also evaluated.

Conclusion: In Chinese gastric cancer patients who underwent gastrectomy, higher postoperative BMI (≥ 23) was significantly associated with longer survival time, whereas severe BMI loss (>10%) at one year after surgery was associated with worse outcomes. Thus, body weight maintenance after treatment is important, and dynamic monitoring of body weight and nutritional status should be emphasized in clinical practice.

Gastric cancer (GC) is a heavy disease burden in China, accounting for about 45% of stomach cancer-related deaths worldwide[1], and with a 5-year relative survival rate of 35.9% from 2010 to 2014[2]. Since gastric cancer is a highly heterogeneous disease, an improved understanding of risk factors associated with survival outcomes is quite important.

It has been reported that excess body weight accounted for approximately 3.9% of all cancers (544,300 cases)[3]. Obesity is an established risk factor for at least 17 different types of cancers, and portends less favorable outcomes in several cancers [4-6]. However, higher body mass index (BMI) is also associated with improved outcomes in some cancers, such as metastatic melanoma, colorectal cancer, and kidney cancer, etc.[7-9], a phenomenon called the “obesity paradox” which is in contrast to the traditional belief that higher BMI is associated with an increased risk of death in the general population.

In GC, it has been reported that increased BMI was positively correlated with the risk of cardia carcinoma[3, 10], however, the relationship between BMI and the risk of GC in other parts of the stomach is still unclear [11, 12]. Some studies showed that obesity was associated with diffuse-type adenocarcinoma and presented an increased risk of precancerous conditions in females, potentially due to chronic inflammation in adipose tissue[13]. In addition, the association between BMI and outcomes of GC patients is controversial. Most patients who underwent gastrectomy and chemotherapy suffer body weight loss due to decreased food intake and medication-induced adverse effects[14]. Several retrospective cohort studies showed that the survival outcomes of overweight GC patients were superior to those of underweight GC patients[15, 16], but some studies showed opposite results[17]. Most of the BMI data were measured at diagnosis, few studies have established the relationship between BMI dynamic changes upon therapy and long-term survival in GC patients, particularly in the Chinese population.

In the present study, we aimed to evaluate the relationship between BMI variation at four different time points (before surgery, 1 month, 6 months or 12 months after surgery) and survival outcomes of GC patients.

This retrospective cohort study was conducted using data from Hospital Information System of Shanghai Ruijin Hospital from February 2010 to October 2017. We collected clinical data from patients with pStage I-III gastric adenocarcinoma who underwent curative gastrectomy (R0 resection) with standard lymphadenectomy (D2 dissection according to Japanese GC Treatment Guideline Version 5) and consecutive adjuvant chemotherapy. Patients with distant metastasis at diagnosis of GC, undergoing neoadjuvant chemotherapy or radiotherapy, not received or not completed adjuvant chemotherapy after operation, undergoing R1 or R2 resection, or patients who died from surgery complications were excluded. Patients with missing preoperative or one-month postoperative BMI data, or missing survival data (n=16) were also excluded. Finally, a total of 576 cases were included in the cohort of Pre BMI (measured 3-5 days before surgery) and Post_1m BMI (measured 4 weeks ±1 week after surgery). A total of 548 cases were included in the cohort of Post_6m BMI (measured 6 months±2 weeks after surgery), 443 cases in the cohort of Post_12m BMI (measured 12 months±2 weeks after surgery). Among them, 19 patients died within one year after surgery, 28 cases of Post_6m BMI data and 86 cases of Post_12m BMI data were missing.

Definition of variables and Data collection

Information was available for all patients on gender, age at diagnosis (≤60; >60), extent of resection (total gastrectomy; subtotal gastrectomy), tumor site (cardia/fundus; body/angulus; antrum/pylorus), pathological tumor type (adenocarcinoma including papillary or tubular adenocarcinoma; mucinous adenocarcinoma or signet-ring cell carcinoma), differentiation degree of tumor (G1/G2; G3), tumor size (maximum diameter of tumor≤2 cm; >2 cm and ≤5 cm; >5 cm), pTNM stage according to the American Joint Committee on Cancer 8th edition, lymphovascular/perineural invasion (yes; no), adjuvant chemotherapy (mono-chemotherapy; combinational chemotherapy). After surgery, follow-up consisted of blood tests, physical examinations and imaging examinations (chest, abdomen and pelvic CT or MRI scan with contrast) every 3 months in the first year, every 6 months in the second year, then annually from 3 to 5 years; Endoscopy was performed annually. Data on overall survival (OS) was obtained from telephone interviews or Shanghai Center for Disease Control and Prevention. OS was calculated from the date of operation until the date of death from any cause. Disease free survival (DFS) was calculated from operation to first observation of disease recurrence through clinical and imaging examinations or death due to any cause. The survival and recurrence status of the patients was last updated in October 2018.

Optimal cutoff values for BMI loss variables were calculated by maximally selected rank statistics[19]using the 'maxstat' package in R Programming Language. For DFS and OS at three time points, they were 11%, 11%, 10%, 7%, 13% and 15%, respectively. BMI loss of 10% is considered clinical meaningful for use, so we chose 10% as the universal cutoff value to classify BMI loss into two categories: ≤10% (moderate loss) and >10% (severe loss).

Socio-demographic and clinicopathologic data were summarized using descriptive statistics. Survival curves for DFS and OS across BMI categories were generated using the Kaplan-Meier method with log-rank tests. To evaluate the effect of BMI and other variables on prognosis, univariate and multivariate analyses were performed using Cox's proportional hazards model. The variables with a p-value of 0.05 or less in univariate analysis were pooled in the multivariate analysis. Chi-square test or Fisher's exact test was used to test the association between categorical variables. Subgroup analyses were done using Cox's proportional hazards model, and the interaction test was also conducted. Patients who did not reach a specific endpoint were censored at time of last follow-up. All statistical procedures were performed using SPSS version 24.0 and R language version 3.6.1. A p-value of less than 0.05 was considered to be statistically significant.

Subgroup analyses were performed to investigate the consistency of the prognostic value of Post_12m BMI loss in patients with different clinicopathological characteristics. As shown in Figure 3, severe BMI loss was associated with worse prognosis than moderate loss in the majority of subgroups. There was no interaction between Post_12m BMI loss and any of clinicopathological factors, except for tumor site (interaction p=0.025 for OS). The effect of Post_12m BMI loss on OS in patients with gastric fundus/cardia carcinoma is uncertain and needs to be further explored.

Baseline characteristics and univariate analysis of DFS and OS (N=576)

a including papillary or tubular adenocarcinoma; b maximum diameter of tumor 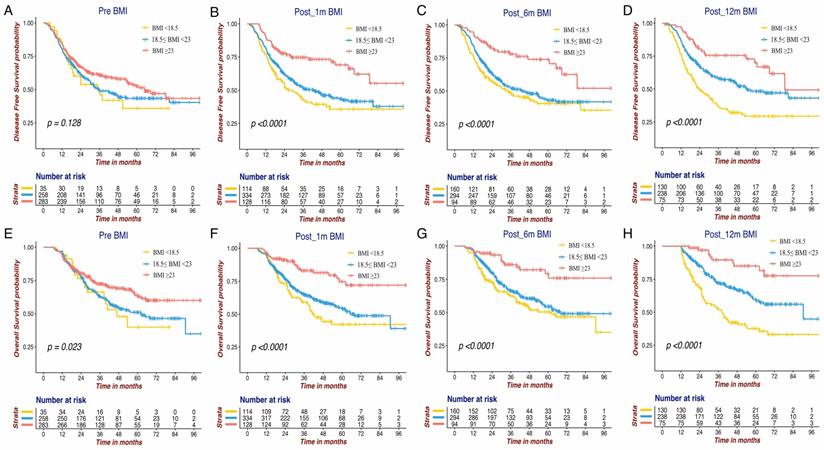 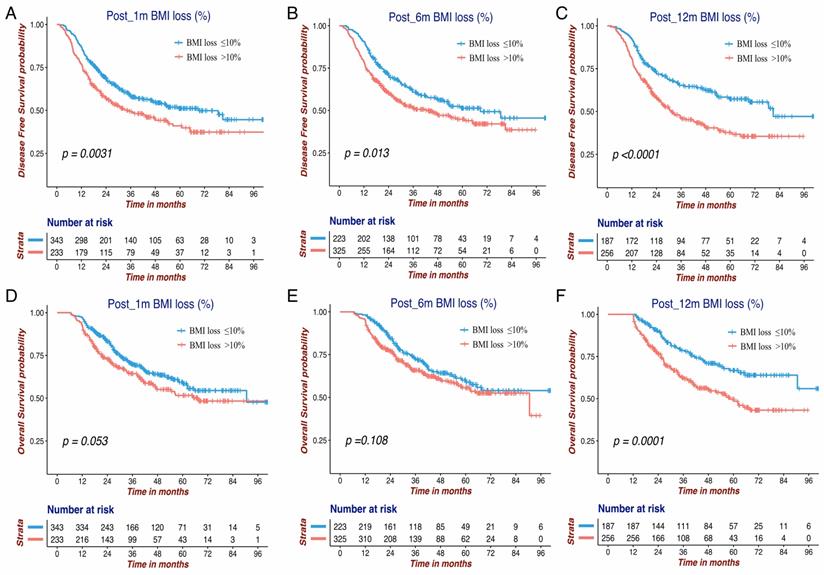 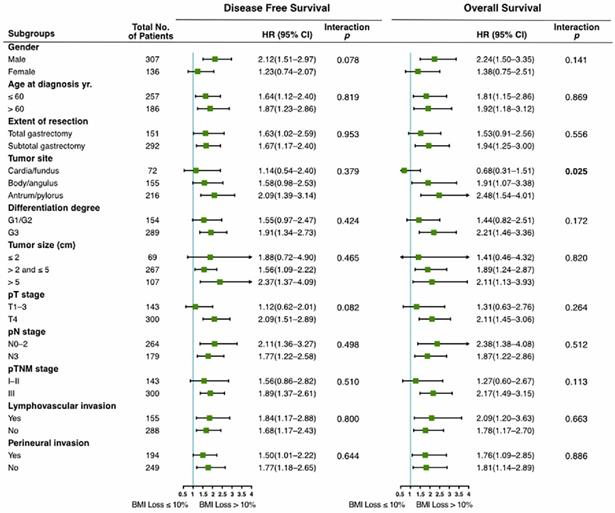 Univariate analysis of BMI variables for DFS and OS

The results of the present study indicated that post-operative BMI variables were independent risks of GC recurrence and mortality. Compared with a relatively stable BMI, severe Post_12m BMI loss (>10%) was independently associated with worse prognosis for DFS and OS, while BMI loss within six months after surgery showed no significant association with survival. The prognostic value of Post_12m BMI loss was consistent among the majority of clinicopathological subgroups. These data indicate that short-term weight loss after surgery may not affect survival, but long-term maintenance of body weight is more significant. We also found that the time point of 12 months after surgery is more valuable for body weight evaluation, which avoids the influence of surgery or adjuvant chemotherapy on BMI and represents patients' stable long-term nutritional status.

Studies on BMI and GC survival differ in terms of BMI assessment, adjustment, inclusion and exclusion criteria. Some studies indicated that overweight and obesity at diagnosis were adverse prognostic characteristics as too much abdominal fat led to unsuccessful and incomplete lymph node dissection [20-22]. In addition, a higher BMI was associated with longer duration of operation and increasing risk of postoperative complications [23]. The presence of comorbid diseases associated with being overweight may also predict poor survival. Chen et al. [15] reported that GC patients with high-BMI exhibited a significantly prolonged OS compared with underweight patients, which was consistent with our research. The author explained that tumor stage was an important factor, since the percentage of advanced cancers was doubled in low-BMI patients compared to high-BMI patients [15]. In our study, all enrolled patients underwent gastrectomy (R0 resection) with standard lymphadenectomy (D2), and patients who died from surgical complications were excluded. BMI distribution between stages was well balanced. Furthermore, we found that severe BMI loss (>10%) at one year after surgery was an independent risk factor for both OS and DFS, which was similar to previous reports that postoperative severe BMI loss (>4.5) (HR, 1.79; 95% CI, 1.29-2.50) was associated with higher mortality[16], and body weight loss ≥15% at 1 month after gastrectomy might lead to poor survival[24]. Compared to previous research that was limited to either one certain time point after gastrectomy or an uncertain wide time range, our study focused on 4 precise time points (pre, post_1m, post_6m, post_12m) and emphasized the importance of BMI dynamic monitoring. We also pointed out the most important time point was 12 months after surgery. These results were rarely mentioned in previous studies.

a including papillary or tubular adenocarcinoma; b maximum diameter of tumor

There are several potential interpretations for our results. First, due to characteristics of GC and Chinese physique, few patients were excessively obese, which could reduce some confounding factors like operation difficulty. Second, patients with higher BMI had decreased treatment-related toxicity and increased response to anti-cancer therapy [25, 26]. Meyerhardt's study showed that overweight patients had a lower rate of Grade 3-4 leukopenia and any toxicity ≥Grade 3, and could tolerate actual weight-based doses of chemotherapy [26], while underweight patients often displayed higher rate of withdrawal or reduction of chemotherapy [27]. Furthermore, overweight or obesity and a stable BMI status might function as protective factors from malnutrition, cancer cachexia, or altered immune functions, which greatly influence the prognosis of cancer patients [28, 29]. Wang et al. demonstrated that obesity increased T cell aging which resulted in higher PD-1 expression and dysfunction driven by leptin signaling [30], which provided an explanation for a recent report that obese patients with melanoma showed improved outcomes with immunotherapy [7].

A novel aspect of our study included the assessment of longitudinal BMI and dynamic BMI changes at four different time points, which has rarely been investigated before, particularly in the Chinese population. We demonstrated that one year after surgery is the most valuable time point for BMI evaluation. As an easily available clinical parameter, BMI before and after surgery could add additional prognostic information for GC patients.

Our analysis still has some limitations. As a single-center retrospective study, it is difficult to avoid confounding factors and bias. Besides, though BMI is a widely used parameter for obesity, it is an imperfect surrogate of adiposity and may misclassify body composition. Li et al reported that visceral and subcutaneous fat might be new independent predictive factors of survival in locally advanced gastric carcinoma patients [31]. Finally, our research only indicates a correlation between postoperative BMI and prognosis, but cannot prove there is a causal relationship between them.

In conclusion, our data suggest that in GC patients, higher BMI (>23) is associated with improved survival, whereas remarkable BMI loss (>10%) is significantly correlated with worse prognosis, particularly at one year after surgery. Monitoring body weight loss as a prognostic factor after treatment should be emphasized during follow up. Since our study is retrospective and exploratory, the results need to be further validated in a multi-center prospective study.