Background: The QRS-T angle from the surface EKG is a promising prognostic marker in patients with coronary artery disease. Cardiovascular magnetic resonance (CMR) imaging with late gadolinium enhancement (LGE) offers high resolution imaging of myocardial damage. We investigated the association of the QRS-T angle and the extent of myocardial damage as assessed by LGE in patients with acute ST-segment myocardial infarction (STEMI)

Methods: 169 patients with STEMI obtained a standardized digital 12-lead EKG on admission for the calculation of the QRS-T angle and underwent CMR imaging for analysis of infarct size by LGE within the first week. Patients were divided into groups: (1) abnormal QRS-T angle ≥ 90 degree and (2) QRS-T angle < 90 degree.

Conclusion: The extent of myocardial damage as measured by the gold standard LGE is associated with a larger QRS-T angle calculated from the surface EKG.

Apart from clinical risk scores, biomarkers and imaging it would be extremely helpful to establish a simple parameter from the routine surface ECG for risk stratification in acute STEMI [5].

The QRS-T angle represents the spatial angle between the QRS loop (depolarization) and T loop (repolarization) [6]. A wide QRS-T angle (≥90°) seems to correlate with electrical instability and has been related to cardiac prognosis in several studies [7, 8].

This study aims to investigate the correlation of the QRS-T-angle on the 12-lead surface ECG and the extent of myocardial damage in patients with acute STEMI as assessed by late gadolinium enhancement CMR.

Consecutive patients admitted to the Department of Cardiology and Angiology at Elisabeth Hospital Essen from February 2015 until March 2017 with acute ST-segment elevation myocardial infarction (STEMI) were enrolled into the study. Patients obtained a standardized 12-lead digital ECG immediately on admission using a Schiller Cardiovit AT 102 plus®. Computerized values of QRS and T-wave axis were given by the Schiller AT 102 plus® software. The frontal QRS-T-angle was calculated as the absolute difference between the frontal QRS- and frontal T-wave axes. With a value greater than 180°, 360° were subtracted in order to give a continuous variable ranging from 0° to 180°.

Cine and LGE images were evaluated blinded to the clinical data by two experienced observers in consensus. LV function was analyzed by outlining epicardial and endocardial borders on the short axis SSFP sequences. Papillary muscles were excluded from analysis. Left ventricular volumes and ejection fraction were derived from contour summation. The extent of late gadolinium enhancement was assessed on long and short axis contrast images by using the 17-segment model of the LV. Typical expansion of LGE in patients with acute myocardial infarction (STEMI) is defined as areas of high signal intensity progressing from the subendocardial myocardial layer. Areas with ischemic infarct scar were defined as enhanced with a signal intensity above at least five SD as compared to non-infarcted remote myocardium. The presence and transmurality of infarcts were scored using the 17-segment model and a 5-point scala per segment (0=0%, 1=1-25%, 2=26-50%, 3=51-75%, 4=76-100%). The total infarct size as expressed as percentage of LV mass was calculated as follows: sum of enhanced segments and their transmurality score (LGE score) divided by 17 segments multiplied by the maximum transmurality score [17].

Statistical analyses were performed with the Excel™ software (Version 14.6.7, Microsoft™). Depending on the distribution continuous variables were expressed as means with standard deviation. Patients were divided into two groups (QRST-angle of 90 degree or larger vs smaller than 90 degree). The two-sample t-test was chosen to analyze differences between these two groups. Pearson correlation and one-sample t-test were applied to investigate the correlation of QRS-T angle and CMR parameters in each group. P values <0.05 were considered as statistically significant. 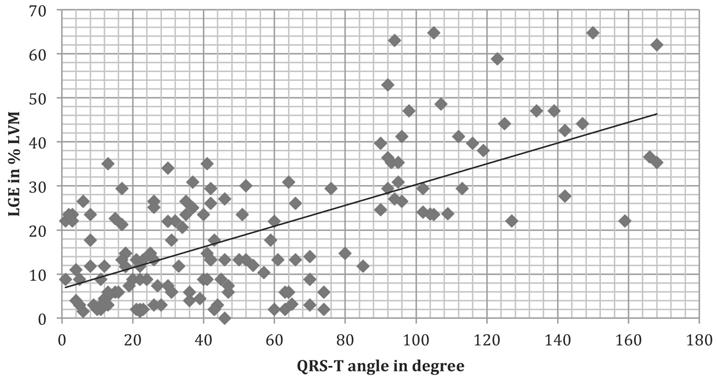 Our study shows that in a population of STEMI patients QRS-T angle on the surface EKG correlates with infarct size on contrast-enhanced CMR.

Previously several studies have been able to demonstrate the prognostic value of QRS-T angle in different patient populations. In a general Rotterdam population of 6,134 patients Kors et al. found an odds ratio of 5.6 for sudden cardiac death, which was superior to standard EKG indicators of adverse events such as ST depression and T wave inversion [18]. Borleffs et al. detected that in a group of 412 ICD carriers a wide QRS-T angle was highly predictive of adequate ICD discharge and ventricular tachycardia [19]. In 2705 consecutive patients with suspected NSTEMI QRS-T angle adds diagnostic accuracy as compared to standard EKG criteria of ischemia alone and predicts cardiac mortality [20]. A frontal QRS-T angle of more than 90 degrees in 467 STEMI survivors with reduced ejection fraction demonstrated a strong and independent prognostic value [21].

Several ECG signs have been evaluated against distribution, transmurality and extent of late gadolinium enhancement on CMR following gadolinium contrast administration: In acute STEMI the resolution of ST-segment elevation, a marker of successful reperfusion therapy, relates to LGE and prognosis [22]. A fragmentation of the QRS complex, however, does not predict late gadolinium enhancement in acute myocardial infarction [23]. And ST-segment elevation in the right precordial leads indicates right ventricular involvement in patients with inferior wall myocardial infarction only in larger right ventricular infarcts if LGE of the right ventricle serves as reference standard [24]. In chronic infarction, LGE identifies infarct scars in patients with clinically silent myocardial infarction that do no exhibit significant Q waves on the surface EKG [25, 26]. Moon et al. found that in a group of 100 consecutive patients with chronic infarction the presence of Q waves was related to infarct size more than to infarct transmurality on late gadolinium enhancement CMR [27].

For a prognostic EKG marker that represents myocardial depolarization and repolarization in the way the QRS-T angle does, the correlation to myocardial pathology on CMR is particularly useful. To the best of our knowledge, this is the first study that relates QRS-T angle in patients with acute myocardial infarction (STEMI) to CMR function and scar.

Several non-invasive parameters that could help risk stratify patients with acute myocardial infarction are used in clinical routine. These include left ventricular ejection fraction, left ventricular volumes, several ECG parameters and detection of myocardial necrosis by contrast-enhanced cardiovascular magnetic resonance imaging. The ultimate goal in risk stratification is to identify patients who will suffer from sudden cardiac death and who need further protection, e.g. the implantation of cardioverter-defibrillator (ICD). However, up till now no single parameter has been successful to fulfill the task. In fact, due to the complex pathophysiology of ventricular arrhythmias a combination of non-invasive parameters might improve the prediction of ventricular arrhythmias in post acute MI patients. The QRS-T angle in patients with acute MI can be ubiquitously assessed and might add to clinical risk stratification in the future.

In conclusion, a QRS-T angle of 90 degrees or more is associated with lower ejection fraction and greater infarct size as assessed by contrast-enhanced CMR. Prospective studies in a larger STEMI patient population with clinical follow-up should be carried out in order to further investigate the prognostic impact of the QRS-T angle and its potential implication on clinical workflow.