Conclusion: Low serum HDL-C may induce upregulation of CD16 on classical monocytes, which may in turn lead to the increase of intermediate monocytes in coronary atherosclerosis patients.

Atherosclerosis is a chronic vascular inflammatory disease with complex etiology [1]. It is the pathological basis of coronary atherosclerosis (CA), which remains a worldwide medical problem [2].

Monocytes play vital roles in the progression of atherosclerosis [3]. In humans, based on the expression of CD14 and CD16, monocytes were normally divided into classical (CD14++CD16-), intermediate (CD14++CD16+) and non-classical (CD14+CD16++) monocytes [4]. These three monocyte subsets have different functions in atherosclerosis [5]. Besides, the functional phenotype of monocytes can change in response to environmental stimuli, causing significant changes in the proportion of monocyte subsets [6, 7].

Recent study revealed the alterations in the proportion of monocyte subsets in coronary artery disease [8]. According to literatures, abnormally increased intermediate monocytes can independently predict cardiovascular events and are associated with the prognosis of atherosclerotic cardiovascular disease (ASCVD) [9, 10]. Dyslipidemia is the first risk factor for CA patients [11]. And several studies have revealed the association between lipids including TC, TG, LDL-C, small HDL and HDL-C etc. and the proportion of monocyte subsets [12-14].

The case-control study was approved by the Medical Ethics Committee of Zhongnan Hospital of Wuhan University (approval number 2018017, Wuhan, China). Informed consent was obtained from all participants prior to entering the study. The study was conducted in accordance with the Declaration of Helsinki.

We recruited 110 CA patients from Zhongnan Hospital of Wuhan University from July to August, 2019. All patients underwent coronary angiography and were divided into two subgroups: stenosis >50% (n = 30) and stenosis <50% (n = 80) groups. Patients with stenosis >50% were defined as coronary atherosclerotic plaque formation, with stenosis over than 50% in at least one major coronary artery; those patients with stenosis less than 50% were grouped to stenosis <50% group. At the same time, 112 healthy control subjects were randomly selected from the same hospital. Based on medical history and clinical examination, people with no history of cardiovascular or other chronic diseases were selected as healthy controls. All enrolled subjects met the following exclusion criteria: autoimmune diseases, cancer, severe infections, cerebral infarction, congenital heart disease, myocardial hypertrophy, myocardial bridge, non-diabetic endocrine diseases and other serious organic diseases. The clinical characteristics and laboratory data of patients and controls were collected. Gensini Scores was calculated based on coronary angiography and was used to evaluate the severity of coronary atherosclerosis.

Gating strategy for monocyte subsets was presented in Figure 1. Monocytes (P1) in leukocytes in FSC/SSC dot plot were presented in Figure 1A. In CD86/SSC dot plot, CD86 positive cells (P2) were firstly gated to identify monocytes (Figure 1B). Subsequently, in the CD14/CD16 dot plot, based on the expression of CD14 and CD16, the identified monocytes were divided into classical (CD14++CD16-), intermediate (CD14++CD16+) and non-classical (CD14+CD16++) subsets (Figure 1C).

The expression levels of CD14 and CD16 were quantified by flow- cytometrically as median fluorescence intensity (MFI). Fluorescence was standardized using multiple peaks rainbow calibration beads (Spherotech, Chicago, USA) to ensure the reproducibility and comparability of median fluorescence intensity (MFI) throughout the study period, as previously described [14]. CytExpert (Beckman Coulter, CA, USA) software version 2.0 was used to analyze the monocyte subsets and calculate the MFI of the CD14 and C16 expression.

Based on the distributions, continuous variables were properly presented as mean ± SD, or as median (inter-quartile range). Categorical variables were presented as frequencies (n). Comparisons between continuous variables in different groups were performed by student's t test or Mann-Whitney U test. Chi-squared test was used to compare categorical variables between the groups. Spearman or Pearson bivariate correlation analysis were used to analyze the correlations involved in this study. Linear regression analysis was used to analyze the association between monocyte subsets and lipid profiles. Bonferroni correction was used to adjust for multiple testing. SPSS software version 17.0 (SPSS, Chicago, USA) and GraphPad Prism 8.0 (GraphPad, San Diego, USA) were used for statistical analysis. Statistical significance was accepted at P < 0.05 (two-tailed).

Baseline characteristics of the subjects

Baseline characteristics were presented in Table 1. Age and sex composition showed no significant differences between the two groups (both P > 0.05). Coronary atherosclerosis patients had higher proportion of diabetes (19.1%) and hypertension (48.2%) medical histories (both P < 0.05), and higher FPG, TG, leukocytes, neutrophils and monocytes, but lower HDL-C and lymphocytes (all P < 0.05).

In the subgroup analysis, both the CA subgroups differed from controls in a consistent manner to the CA group as a whole. Except for Gensini Scores (P < 0.0001), no significant differences were found between the two subgroups (all P > 0.05).

In the subgroup analysis, both the CA subgroups differed from controls in a consistent manner to the CA group as a whole. In addition, the proportion of monocyte subsets in the two subgroups showed no statistical differences (all P > 0.05). 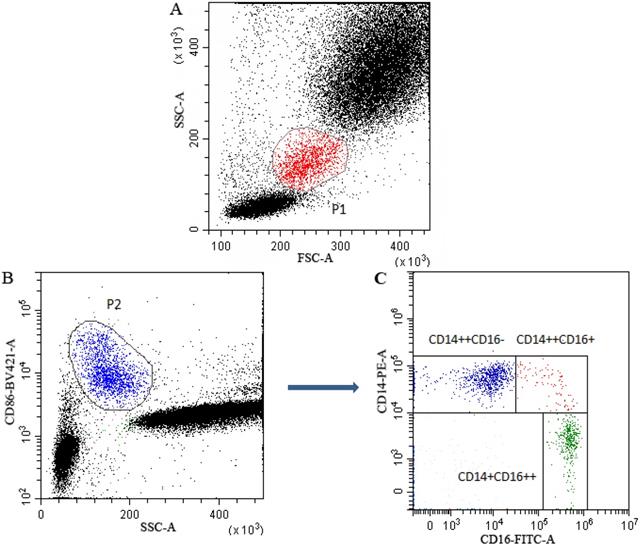 Data are presented as mean ± SD or median (interquartile ranges) or number (%) as appropriate.

*: P<0.05, comparison between the whole CA group and the control group;

+: P<0.05, comparison between each subgroup and the control group;

Data are presented as mean ± SD or median (interquartile ranges) as appropriate.

+: P < 0.05, comparison between each subgroup and the control group.

After Bonferroni correction, results still statistically significant were in bold.

After Bonferroni correction, results still statistically significant were in bold.

For this analysis, a P value <0.0042 (0.05/12) was considered significant (Table 5). In the control group, linear regression analysis revealed a negative correlation between intermediate monocytes and serum HDL-C (β = -0.386, P = 0.002). No significant correlations were found between monocyte subsets and lipid profiles in CA group (all P > 0.05). In the control and CA combined group, serum HDL-C showed an inverse correlation with intermediate monocytes (β = -0.465, P < 0.0001).

Monocyte subsets do not associate with CA severity

After Bonferroni correction results still statistically significant were in bold. 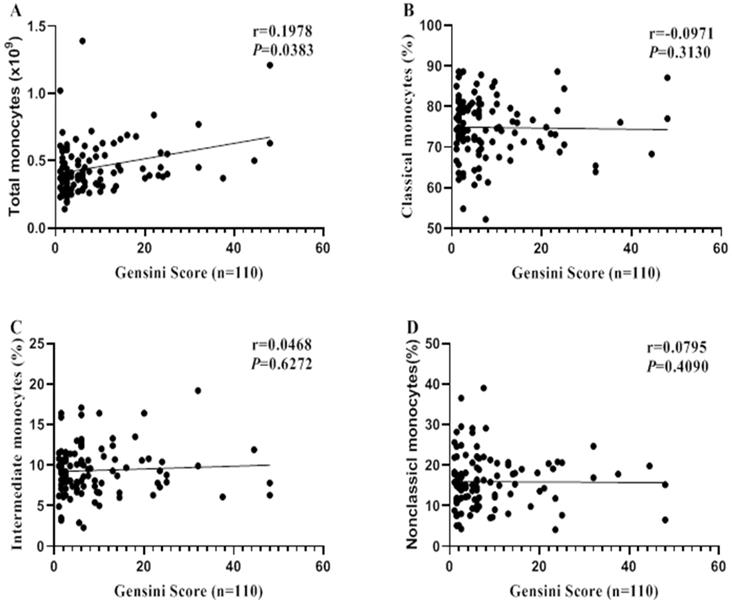 In the present study, the most important finding was that there was a negative correlation between HDL-C and the expression of CD16 on monocyte subsets. In addition, we detected increased intermediate monocytes in coronary atherosclerosis patients, and found an inverse association between serum HDL-C and intermediate monocytes in the control subjects.

As for the reason for the inverse association between HDL-C and CD16 expression, we speculated that the monocytopoiesis caused by lower HDL-C might be the reason. Low HDL-C induced the impairment of cholesterol efflux [14]. As reported, in atherosclerotic ApoE-/- mouse, cholesterol efflux can regulate monocytosis, while infusion of reconstituted HDL treatment reduced monocytosis [24]. Under the premise of detecting increased total monocyte count and decreased HDL-C in patients, we assume that HDL-C dysregulation may promote monocytosis during atherosclerosis progression. Part of newly generated monocytes may up-regulate expression of CD16 in response to HDL-C decrease, which may leads to a general increase in the expression of CD16 on all monocyte subsets.

Since monocyte differentiation trajectory revealed that classical monocytes that first originated in the bone marrow will sequentially differentiate into more matured intermediate and non-classical subsets [25]. And during this process the expression of CD16 was gradually increased. The shift of classical to intermediate monocytes is accompanied by increased CD16 expression, which may be a reflection of the maturation process of classical monocytes. Low HDL-C may induce the up-regulation of CD16, which may in turn promote the maturation of monocytes. This might be responsible for the decreased classical and increased intermediate monocytes in patients in this study. However, we should note that the current classification strategy based on CD14/CD16 is classical but not sufficient to clearly distinguish monocyte subsets. Constantly discovered more markers for specificity of monocyte classification, such as CD33, CD64 and HLA-DR may help us better identify the expanded monocytes [26]. In addition, the application of emerging technologies, such as single-cell sequencing, may be beneficial in elucidating the origin of expanded cells [27].

In keeping with previous studies, we confirmed that there was a negative correlation between serum HDL-C and intermediate monocytes in the controls, but not in the patient group. We thought this might be due to the drug effects. As we known, statins are common lipid-regulating drugs that affecting monocyte phenotypes in atherosclerosis. Effects of statins on monocyte subsets vary from drugs. Simvastatin and atorvastatin can reduce CD14/CD16 expression on LPS-stimulated monocytes, causing reduced intermediate monocytes in vitro [28]. In addition, fluvastatin treatment in hypercholesterolemic patient leads to a decrease in CD14 expression, but an increase in more matured non-classical monocytes [29]. Statins affect CD14 and CD16 expressions, causing changes in monocyte subsets. This may be the cause for the weakening of the association between HDL-C and CD16 expression and intermediate monocytes in patients.

Although CD14 was found to be positively correlated with HDL-C and negatively correlated with TC, there was no significant difference in CD14 expressions between the groups. As mentioned before, statins can affect CD14 expressions on monocytes [28, 29], which may be the cause for the above results. However, the mechanism needs to be further explored. In addition, Liu et al. pointed out that the lipid-induced epigenetic regulation mechanism mediated the expressions of CD14 on monocytes [17], which provides ideas for subsequent research.

At last, we performed a subgroup (stenosis >50% and stenosis <50%) analysis to figure out whether the altered monocytes can be used to predict the severity of coronary artery stenosis. However, our results indicate that the expanded intermediate monocytes in patients don't associate with coronary stenosis degrees, nor can it predict disease severity. The change in the phenotype of monocytes may be related to early vascular inflammation, but not plaque accumulation. However, it reminds us that in addition to patients with severe coronary atherosclerosis (with a stenosis exceeding 50%), patients in the early stage of atherosclerosis should also be concerned. Reversing the monocyte phenotype through lipid-regulating at an early stage may help prevent atherosclerosis.

Taken together, our study put forward a new insight that beyond monocyte subsets, increased CD16 expression may also provide additional information for assessing the risk of atherosclerosis. Restoring HDL-C functionality might be a way to modulating CD14 and CD16 expression, which may be a potential mechanism to reverse the abnormal monocyte phenotype and prevent coronary atherosclerosis.

There are several limitations in the present study. Firstly, the current classification strategy is relatively limited. The introduction of more markers, such as CCR2, Slan and HLA-DR, is beneficial for better differentiation of monocyte subsets. Secondly, this is a cross-sectional study that we cannot explain the regulation mechanism of lipids on the expressions of CD14 and CD16. Lastly, several clinical characteristics, such as medication information, smoking habits and body mass index were failed to collect, which was one of the limitations.

In summary, low serum HDL-C may induce upregulation of CD16 on monocyte subsets, which may in turn lead to the increase of intermediate monocytes in coronary atherosclerosis patients.

This work was supported by grants of the National Natural Science Foundation of China (grant nos. 81871722).

3. Ghattas A, Griffiths HR, Devitt A, Lip GY, Shantsila E. Monocytes in coronary artery disease and atherosclerosis: where are we now?. Journal of the American College of Cardiology. 2013;62:1541-51